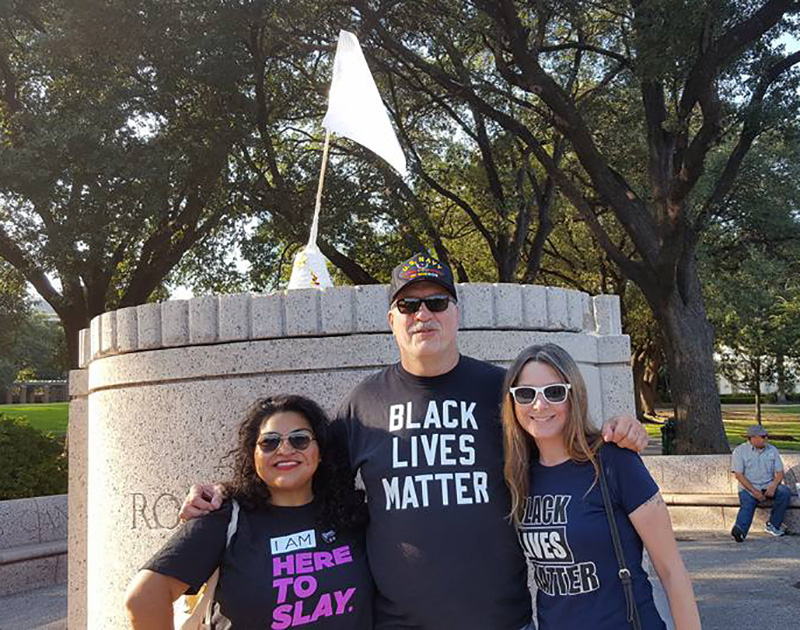 After Getting Arrested Following A Scuffle With Confederate Sympathizers, A Local Vietnam War Veteran Is Back In The Spotlight For His Activism.

On Sunday afternoon, under the warm late summer sun, about 100 demonstrators protested the removal of the Robert E. Lee statue from Lee Park. The sole counter-protester, Albert Woolum, showed up alone, wearing a “Black Lives Matter” T-shirt and waving a white flag.

The 66-year-old Vietnam War veteran’s presence naturally riled up the demonstrators, leading to a pushing match in which Woolum alleges the other guys pushed first. Still, police arrested Woolum and held him in handcuffs for an hour before taking him to Lew Sterrett Justice Center to book him on charges of disorderly conduct.

“This was a case where I was basically there by myself,” Woolum says when reached by phone this afternoon. “There were no other activists in the area. I’d never dealt with a group like that, and it was totally unexpected. I retreated to where I thought I was safe, but I guess it wasn’t.”

His arrest was caught on tape by WFAA Channel 8:

Woolum, who is being represented by local attorney and vocal anti-police brutality activist S. Lee Merritt, spent 16 hours behind bars before being bailed out at around 4 a.m. Monday morning.

It should be noted that the local activist and is no stranger to the limelight. Woolum first made waves last year when he joined the DeSoto High School volleyball’s team protest when they knelt during the national anthem at their games. His arrest has led to more national attention, as activism journalist Shaun King — whom Woolum has met on several occasions — posted about the Sunday incident to his popular social media accounts.

Al is a ally & a friend. He deserves our support. @DallasPD drop the charge & arrest the men who assaulted this 65 y/o war vet. SUPPORT! https://t.co/pRlllL1yF8

Woolum says he decided to become much more active in the Black Lives Matter movement after the July 2016 shooting in Downtown Dallas. Since then, he estimates that he has attended between 30 and 4o protests in town related to police brutality, immigration, the Keystone XL pipeline and white supremacy.

What irks him the most lately, though, is the historical misinformation that’s driving the so-called alt-right to rally around Confederate monuments.

“They like to talk like they’re speaking for all white people,” Woolum says. “They don’t know what their culture and history is. There’s a positive history, but they focus on this hateful history.”

While Woolum could not comment further on his disorderly conduct case when we reached him today, he says he is hopeful that his charges will be dealt with and that, in the meantime, he will seek charges against the people who pushed him Sunday afternoon.

To help out with his legal expenses and time of work, a group of other local activists have set up a crowdfunding page for Woolum. Woolum says he is extremely grateful for the effort, but that it’s not the only gesture of support that has impacted him emotionally these past few days. During his 16-hour stay in jail, the diabetic Woolum started to feel unwell. A fellow inmate then noticed his pain and shared with Woolum a sandwich that he had saved from earlier in the day.

“It was around midnight, and I wasn’t feeling too good, and he gave me one of his sandwiches, and we talked and laughed and shared stories all night,” Woolum says. “The only humanity I saw in prison was from the other inmates.”