What’s Next For The UNT Spider-Man? 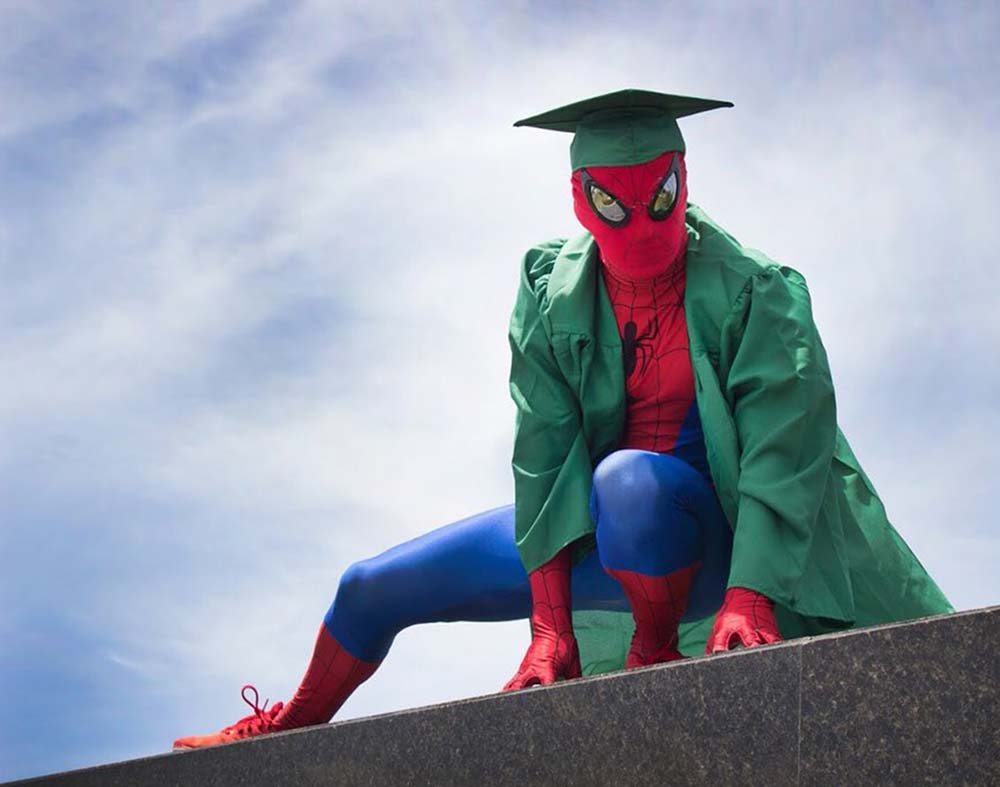 A Student Who Spent Four Years Dressed Up As Spider-Man Finally Graduated From The University Of North Texas This Month. Now What?

After four years spent patrolling the University of North Texas campus in Denton, the school’s friendly neighborhood Spider-Man is now gearing up to face entirely new evils — a set that includes finding a job, paying off student loans and navigating full-blown adulthood.

Yes, after graduating from school earlier this month, the UNT student who spent the last four years anonymously wandering across campus dressed up as Spider-Man says he is well aware of the fact that graduation comes with great responsibility.

But, actually, he might be uniquely prepared to face the real world.

Per a 2017 profile in the North Texas Daily, the student from Queens quickly embraced his role as the campus’ friendly neighborhood Spider-Man — and de facto campus mascot after the passing of the albino squirrel Lucky — after he first dressed up in the role for a Halloween party he attended back in his freshman year. Initially, he wore the full-body costume as a way to cope with homesickness, but he quickly found that wearing the get-up cheered others up as much as it did him. And so he fully committed to the bit, not only creating a Twitter profile for his character, but even transitioning for a spell to become Spider-Man archenemy Venom.

In other words: The act helped the man behind the mask learn a thing or two about humanity, about creativity and about storytelling.

So it’s no surprise that, upon his graduation from the school, he made sure — in true Peter Parker fashion — to take a few photos honoring the occasion. Taken by his fellow UNT student Baylee Friday, whose own name sounds like that of a comic book character, the photos have since gone fairly viral in the UNT community, garnering more than 1,700 retweets (at the time of this publishing) since being posted.

In the wake of stumbling across those photos ourselves, Friday connected us with the man behind the mask for a quick interview about Spider-Man’s four years on campus, his plans for the future and whether he thinks anyone else will take up the Spider-Man mantle in his absence. (Spoiler alert: He says someone will.)

Scroll down for that. 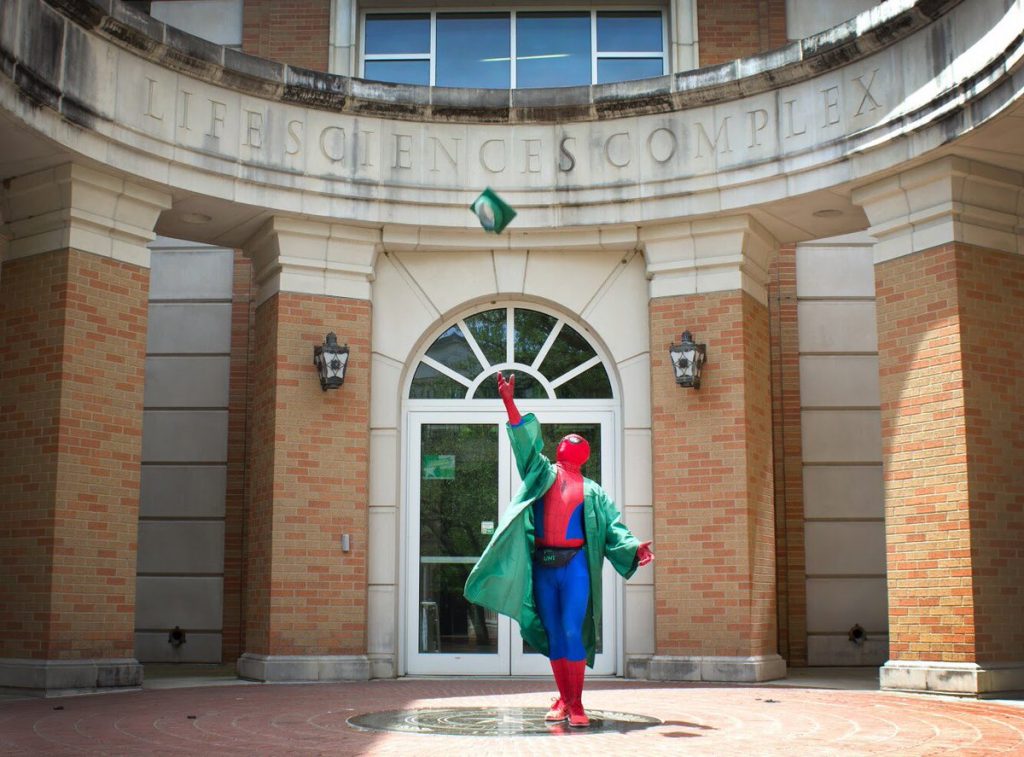 Let’s start with the obvious question: Now that you’ve graduated, what’s next for UNT’s Spider-Man?
What’s next (in between job searching) is to call up hospitals and visit children. I always wanted to do that, and I feel kids that are going through hospital lives need some entertainment — besides their nurses. Not that nurses are not entertaining! Mine most certainly was when I was in the hospital once. The point is that I would like to give back to my community. I also would like to find some way to do community service and feed people who don’t have much food. Soup kitchens, I guess. Maybe more. I also want to try and search for ways to help kiddos and people who suffer from depression, as I feel it is something that needs to be addressed. Really, I just want to give back to the community. That’s always been the main goal in my life. I’m sure things will work out, but I want to try and just make people smile and not stress about life. That’s always been the main goal of this, not for fame or fortune. It’s for people like you. 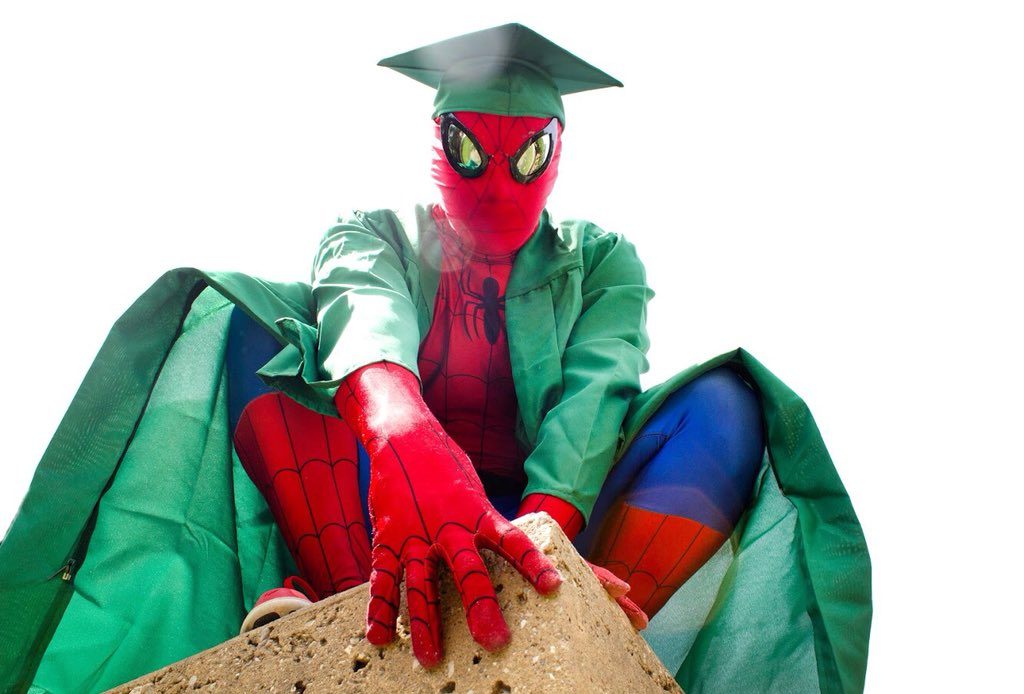 Will the torch be passed on to another Spidey, like with Miles Morales post-Peter Parker?
I have already passed the torch down to another new Spider-Man on campus. When I found him, he was going through some hard times — depression, I’d say. I decided to give him an opportunity to become something more than what he thought he was, to find the greatness within himself. He says it’s helped him to give back to people. The power of giving back to people helps him to overcome his hard times. Its funny how, four years ago, Spider-Man did the same thing for me when I was going though some hard times. 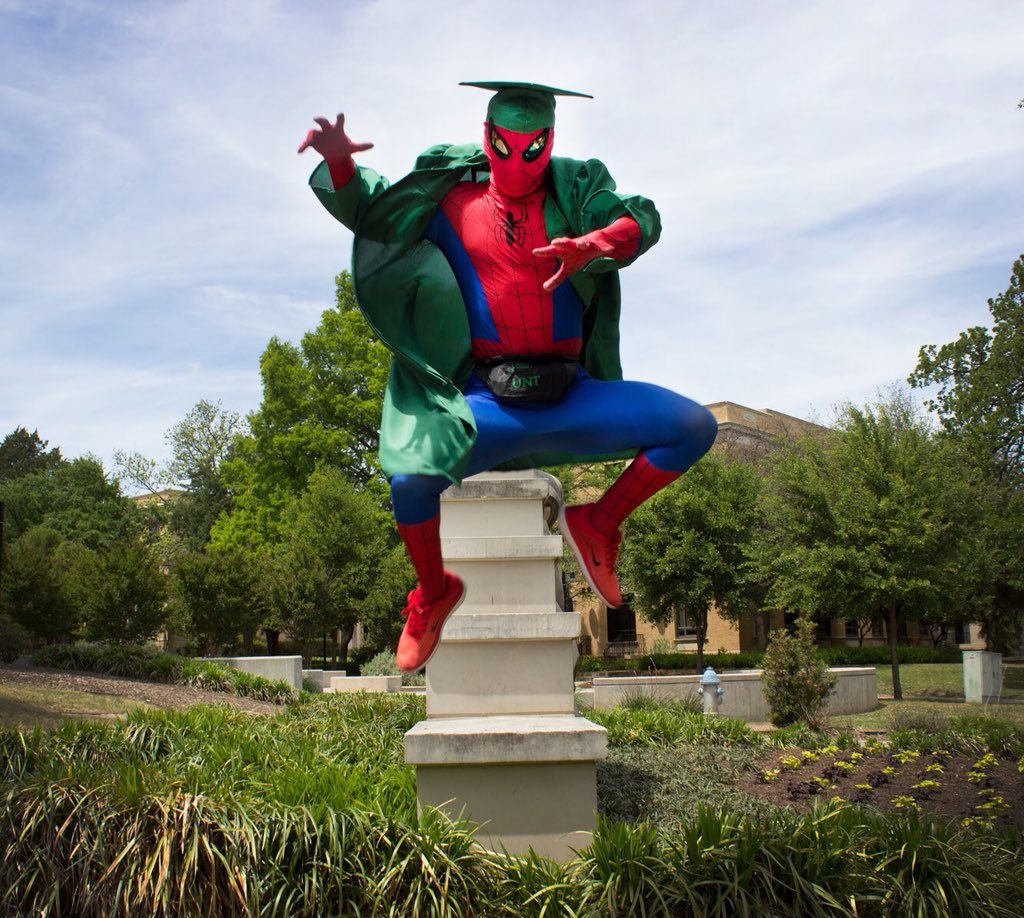 Who would you say were your biggest rivals and villains faced while at school?
I think my biggest rival would have to be financial aid! See, I sold my web shooters so I could afford college. It sucks because now I can’t swing around. But that’s OK! It’s taken me a long time to finally save up enough money to create my own web shooters again — but, boy, was it a pain. Another thing I took on, or at least did patrols at night for, was the whole “evil clown” scare from a few years back. The people of UNT were scared clowns would get them, so I did my thing and stepped up to run around campus to make sure everyone was safe. Was that the smartest idea? I don’t know — especially if they had a weapon and all I had was a Spider-Man costume I created years before this. So, no, it probably wasn’t a great idea. But, hey, sometimes you’ve got to serve your community. Finally, I think the biggest rival was myself at times. I doubted my abilities fairly often — even to the point where, if a common preacher guy would say I was wasting my college career dressing up as Spider-Man instead of studying (and I did study by the way), I would give up my work for a time. Or if someone would heckle me and shout that, “You needed to grow up!” Even the effects of school and work, plus other health issues of my family, forced me to decide between Spider-Man or my life at times. I always felt like I never had an ordinary life, and I wanted a normal life of a college student. But I had never really been granted that because I was sneaking off to be Spider-Man for hours instead of going to college parties. Would people really miss me? Probably not, I’d say to myself — a lot. I guess that whole idea — “Should I give this up so I can focus on myself?” — played a big factor into this. Should I put down the mantle on Spider-Man? After all, every boy soon has to put away his toys and become a man. Out of all the villains I have faced — Doctor Octopus, the Green Goblin and financial aid — it was truly me I was trying to overcome. I was learning though Spider-Man to have confidence in myself and never give up in what I believed in, to give back to the community no matter what. As a boy, I couldn’t fit into my Spider-Man costume. But now that I have grown, I can fit into the kind of man I want to be. 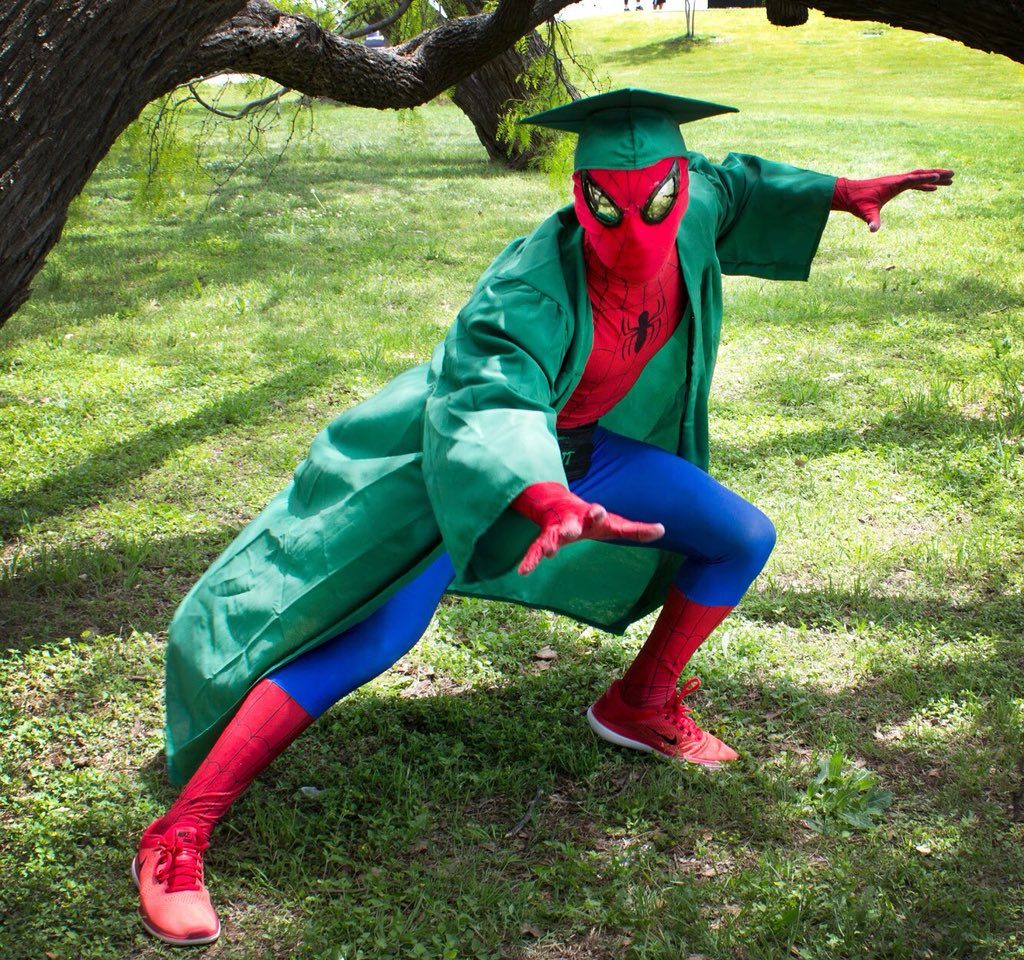 What legacy do you think you’re leaving behind as the UNT Spider-Man?
Legacy? I never expected to leave a legacy, let alone an impression on people. If anything, the thing I will leave with UNT is that anyone can be Spider-Man. I would wear two-way mirror eyes — so people can see themselves in my eyes, so that they too see that they have the power within themselves to do great things. I would hope that people would start embracing who they truly are, and maybe look up off their phones for a while and look around and enjoy the world. And, by all means, fulfill your potential!

Last question: Have you seen the above meme? What are your thoughts?
I have seen this meme — and I must say that it’s creative! I started laughing when I first saw it, and then I showed it to Iron Man. Hulk didn’t think it was funny. But, then again, Hulk is Hulk. 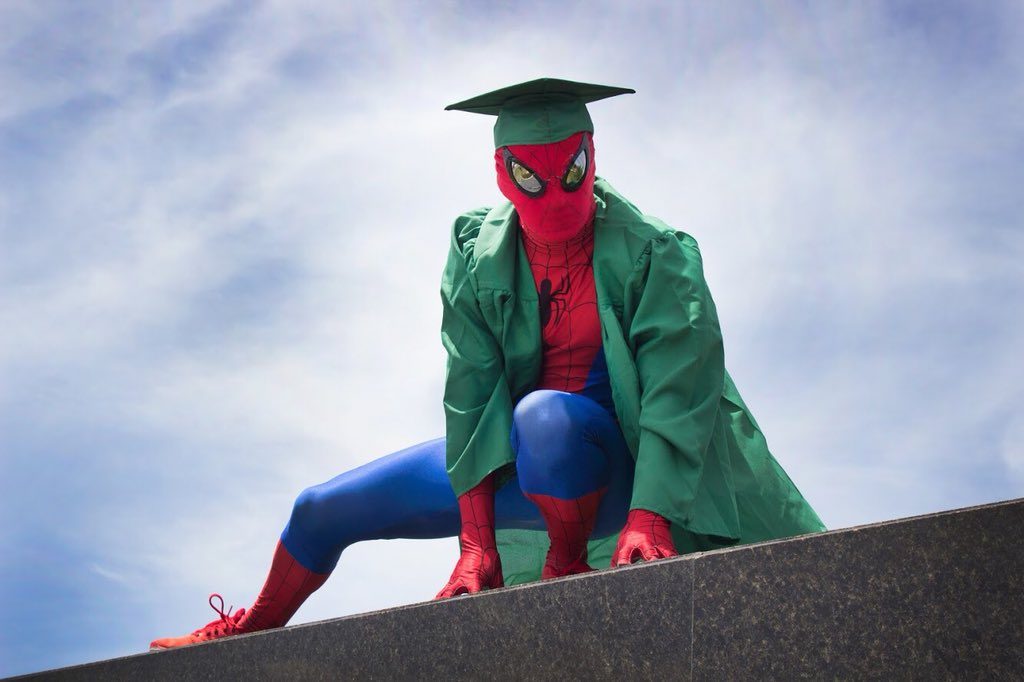 All photos by Baylee Friday.