Thor’s Got Jokes, You Guys! 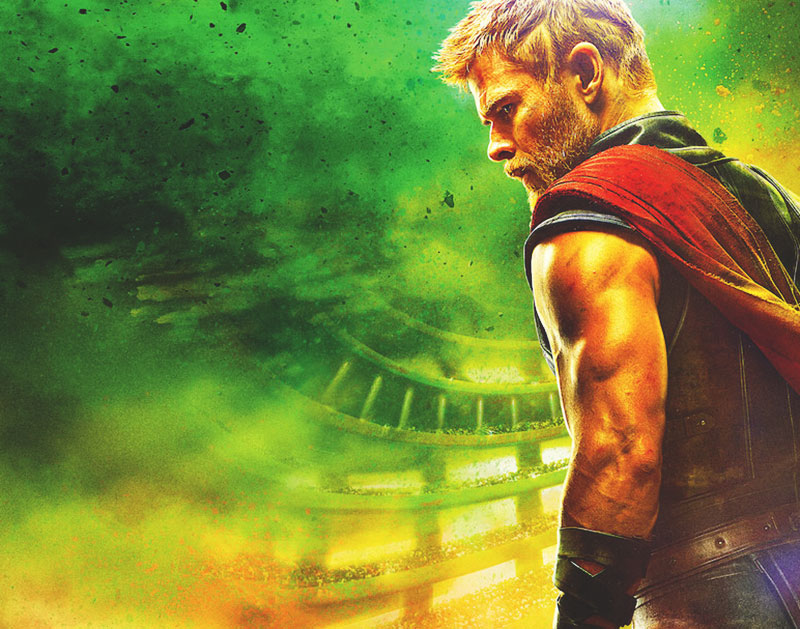 A Decade After The Birth Of The MCU, The God Of Thunder Finally Gets The Showing He Deserves With The Colorful And Entertaining Thor: Ragnarok.

For one, his movies are not well-regarded within the larger Marvel Cinematic Universe. And then there’s his trickster brother, Loki (Tom Hiddleston), who often steals his thunder — to the point that he was even the main villain in the first Avengers movie. Oh, and lest we forget: Thor even gets sidelined in Age of Ultron for a nonsensical vision quest.

Fortunately, it seems like Thor: Ragnarok director Taika Waititi was the missing ingredient needed to make the beloved character work on screen.

Gone in this latest Thor tale are the Shakespearian musings about duty, honor and family. Tossed aside is the focus on Earth, with Waititi narrowing his lens instead upon Thor’s native Asgard and new planet Sakaar. Front-and-center here finally is Thor — albeit a rather broken, soaked-in-neon version who has been robbed of his weapon, his supporting cast, his home and even his signature golden locks.

The result is an equal-parts dark and funny movie that feels like the synth-scored marriage of Flash Gordon and Conan the Barbarian.

At the beginning of the movie, Thor has failed to find any of the Infinity Stones in the two years since Age of Ultron. Instead, we see him casually defeating his father Odin’s (Anthony Hopkins) greatest enemy, Surtur, and seemingly preventing the Asgardian apocalypse known as Ragnarok. Or, well, has he prevented anything at all? Back home, Thor finds an Asgard that has become a hedonistic mess with Loki posing as Odin. And, after a hilarious run-in with Dr. Strange (Benedict Cumberbatch), Thor finds firs father Odin on Earth and the real villain emerges: Her name is Hela (Cate Blanchett); she’s Odin’s firstborn, Thor and Loki’s sister, and the goddess of death.

Right off the bat, she destroys Thor’s trusty hammer Mjolnir and manages to take over Asgard in all of five minutes. In a series known for its first villain, Hela immediately manages to be as compelling as Loki. She’s equally bitter and scorned as her dark-haired sibling is, but for different reasons. Being the first-born child of Odin, the two shared a bond that was emboldened by the fact that Hela was his lieutenant in the old, more aggressive days of Asgard. Once Odin felt he’d had enough of bloodshed, he sealed Hela and Asgard’s history away, replacing it with shiny gold palaces, peace and his two sons. Now unleashed, she’s out for blood. And between her striking look, her back story and her sass, Hela is very much a true stand-out villain.

She sure makes easy work of Loki and Thor right away, too, dispatching them to a literal trash world called Sakaar that’s controlled by the Grandmaster (a fabulous Jeff Goldblum) who hosts deadly gladiator battles for his own weird pleasure and squares our title character off against his old pal Hulk (Mark Ruffalo), who has become the Grandmaster’s champion and has also somehow learned to speak.

Despite its thematic focus on Asgard, Sakaar is the true heart of the movie. A visual delight filled with goofy aliens, wormholes and space ships, it’s basically where Guardians of the Galaxy, Vol. 2 should have been set. Beyond Hulk, it also houses the badass but traumatized Valkyrie (Tessa Thompson) — an important cog in the machine Thor must build in order to take down Hela and restore balance to the universe.

Most of all, though, Ragnarok restores balance to Thor. Thanks to its tonal shift, Hemsworth is given more to work with, holding his own as he turns in his best work to date while squaring off against old and new acting heavyweights alike. It’s almost a shame Hemsworth is so ripped and handsome, his comedic timing is so strong.

Unfortunately, the same can’t be aid of Waititi’s use of Idris Elba and Karl Urban. Elba’s Heimdall is confined to just a few scenes, and he mostly feels out of place even when he does appear. Urban’s Skourge, meanwhile, is poorly written and given an arc the character doesn’t earn — a shame, since Judge Dredd truly does deserve better.

Still as the MCU chugs along into its 10th year, it’s refreshing to see someone aside from Guardians director James Gunn get a crack at this universe and emerge on the other side with his voice intact. Waititi has indeed created something of real value here: More than just one of the funniest MCU entries to date, Thor: Ragnarok is also a surprisingly emotionally movie that truly feels like the culmination of years’ worth of stories, with characters growing and long-gestating plot lines resolving.

To that end, it might be the most comic book-esque movie ever. But, more than that, it’s the film Thor has long deserved.

Sure, it may have taken some time to get here. But thank the god that it arrived at all.