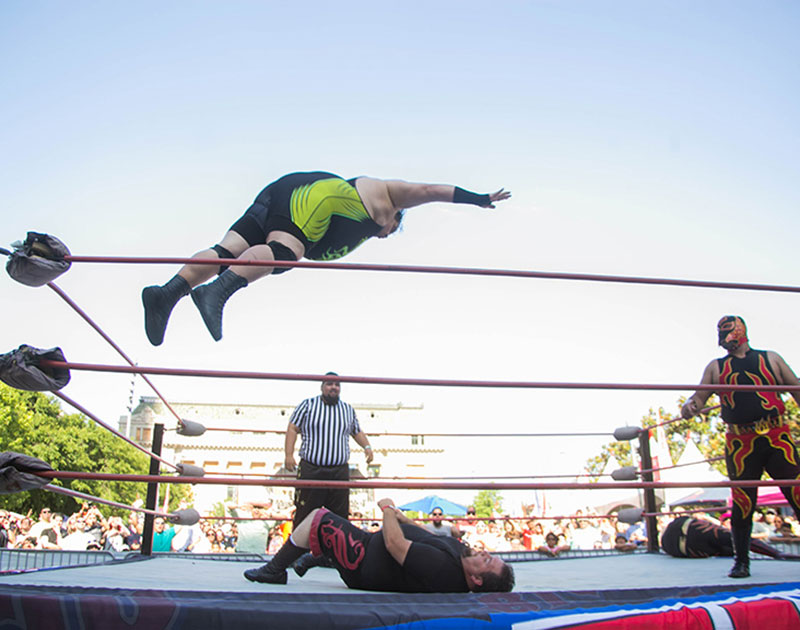 Well, we made it through another work week and just a little bit closer to that future we’ve all been dreaming about.

Wait, which future is that, exactly? Well, let’s just say it involves drones delivering doughnuts the way a doughnut company in Denver tested doing so this week.

We truly are living fascinating times, aren’t we?

But, hey, there’s still plenty to be excited about when it comes to the future. Take, for instance, the below list we’ve compiled of events happening around town in your immediate future. We predict you’re gonna spent the next few minutes skimming it!

Pueblo at Club Dada
Pueblo is getting out of town, as we wrote about earlier this week. The four Texas natives are headed to California on their seven-city tour and Dada is their first stop. LoMETA and Majik Taylor open. – OM

Hurray For The Riff Raff at Trees
The folk band from Louisiana is bringing the smooth jams to Dallas. Watch out for singer Alynda Segarra’s voice or you’ll fall in love with it. Making Movies opens the show. – OM

The Split Squad, Dressy Bessy at Three Links
A mix and match of members from Blondie, Fleshtones and Plimsouls stops in Dallas with indie rockers Dressy Bessy. Clifffs opens the show.

SOLUNA – Alice in Wonderland at Winspear Opera House
Part of the ongoing SOLUNA festival takes you into the ballet musical version of the biggest acid trip in the children’s story time arsenal. – OM

Cedars Logo Reveal at Industry Alley Bar
One lucky artist’s design has been chosen to be the face of the booming Cedars neighborhood. They’ll find out tonight. So much hype. – OM

CeCe Winans at Majestic Theatre
The 10 time Grammy-winning gospel singer included Dallas in her 15-city #FallinLoveTour and we should consider ourselves #blessed. – OM

Emo Throwdown 2017 at The Prophet Bar
There’s gonna be so much emo that your inner 16-year-old will be jumping for joy. Forever Starts Today, So Soon, The Truth and several other bands will play. – OM

Emo Nite Dallas at The Dirty 30
If seeing actual emo bands perform actual emo songs isn’t your thing and you’d rather just sing along to the ones you already know, then consider this your option for the night. Need more prodding? OK, then: This month’s offering is going down at the new Expo Park space The Dirty 30, so consider this your excuse to check it out. — Pete Freedman

Decades Night: ’80s at Nickel & Rye
Frizzy hair and acid washed jeans are making a comeback for one night. Drink it up and listen to your favorites from the ’80s. – OM

Deep Ellum Lit Hop 2017 at Deep Ellum
Calling all bookworms, slam poets and appreciators of general creativity. Here’s your chance to walk the streets of Deep Ellum with like-minded folks who appreciate the value of language. – OM

The Graduate at Texas Theatre
And here’s to you, Mrs. Robinson. Jesus loves you more than you will know. Ahh, classic. – OM

Erika Wennerstrom at Shipping & Receiving Bar
The former Heartless Bastards singer is driving up I-35 from Austin to play Fort Worth this weekend. Chucho opens the show. – OM

Tampopo With Pop Up Ramen Shop at Texas Theatre
Eat some ramen while you watch a film about ramen. Texas Theatre is hookin’ it up. – OM

Nicole Moudaber at It’ll Do Club
Hailing from Nigera, I can’t say Nicole Moudaber’s tracks are anything but ordinary house music meant to heighten whatever drugs the club-goers consume. If dub’s your thing take hold to It’ll Do. Drugs not required. — Evan Henry

Locked & Loaded – Son of Stan, Field Guide, Programme at Armoury, D.E.
It’s a mix of pop, rock and electronica as these locals take the stage at this FREE show. – OM

Travis Tritt at Billy Bob’s Texas
The Grammy award-winning country singer has been doing his thing for over 25 years. With numerous charted singles, 19 top ten hits and 1-million album sales, Tritt is the real deal. Which explains how he’ll fill up the World’s Largest Honky-Tonk. — Sydney Johnson

T.I. at Gas Monkey Live
T.I. is continuing his foray into TV and movies with a recently announced project with comedian Kevin Hart, but he’s never getting away (we hope) from the stage full-time. – OM

Index Fest at Panther Island Pavilion
The new iteration of Untapped is here. Craft brews and live music will be making their return as expected. California’s Dawes headlines the musical festivities. – OM

Art Con – “Phobias” at Life in Deep Ellum
The featured artists have been tasked with creating works of art that capture the deep nature of phobias. Cure for Paranoia and Pearl Earl will play live. – OM

Peticolas Ping Pong Tourney at Peticolas Brewing Company
A $50 certificate will be awarded to winner of the Peticolas Ping Pong tourney. That’s a good amount of suds. It’ll cost you $5 to register, but think of the memories you’ll make while playing buzzed ping pong. – OM

Imperial Wrestling Revolution at Gas Monkey
You don’t have to wait until WWE comes to town next month. Check out this indie show and see Chavo Guerrero, MVP and “Hacksaw” Duggan in action. – OM

Aqua: Felix Cartal at SiSu Uptown
The Canadian DJ has collaborated with the likes of Selena Gomez and Rihanna and now he’ll spin tracks while you get pampered Uptown-style. – OM

Cover photos by Karlo X. Ramos. To find out what else is going on today, this week and beyond, check out our event directory.