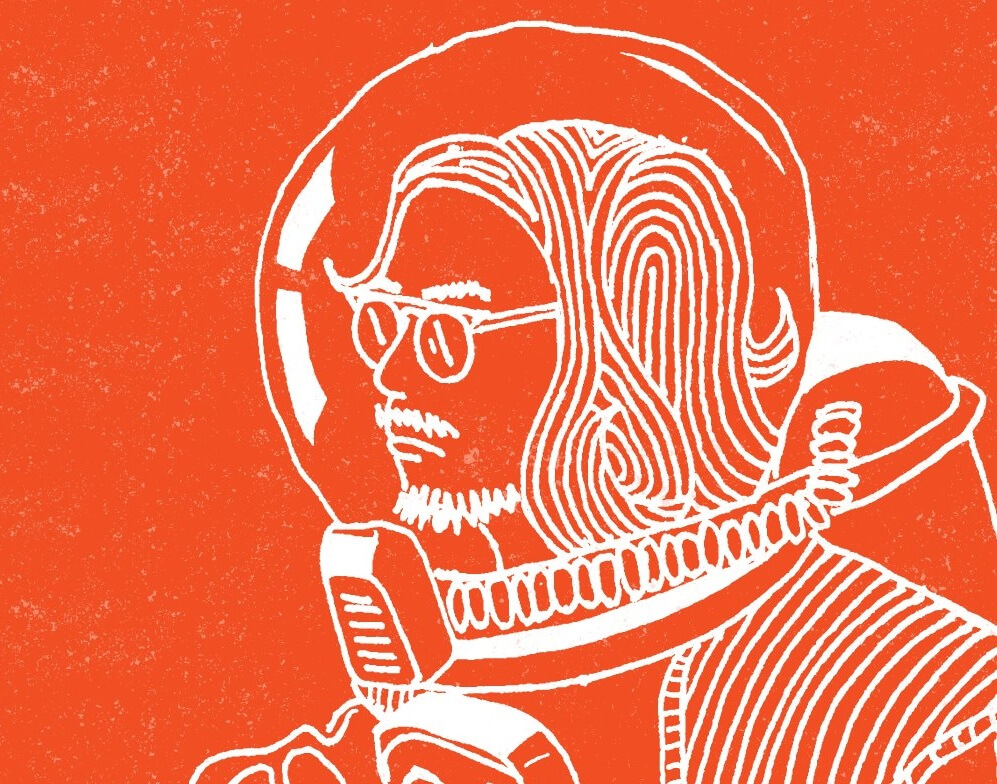 Sometimes it can be hard to see the obvious, even when it is giant, neon and inches from our face. That was the case with this girl, who handed out tons of her school portraits without ever realizing that edgy looking graffiti covered wall she was so cool-ly posed in front of was decorated with a giant green dick.

Anyway, alls we’re saying is that unless somebody points something out to you, certain things can just go unnoticed somehow. We wouldn’t want that to happen with your weekend plans, so we’ve gone and pointed out many quality things you can do with your free time this weekend. — Cory Graves

Ty Richards (Album Release) at Three Links
Richards’ album, Zillion, just came out last week. It features 10 cuts that the Fort Worth native has been laboring on for nearly two years now, while playing every instrument on the thing himself. That output includes the slow burn that is the equal parts funky and psychedelic “Spaceman,” which we reckon is the second-best locally-tied release of the entire year. Medicine Man and Natural Anthem open. — CG

Maddie & Tae at Billy Bob’s
Madison Marlow and Taylor Dye first cracked the big time in 2015 with anti-bro country anthem “Girl in a Country Song,” making sure they stayed in the spotlight with subsequent hits like “Shut Up and Fish” and “Sierra.” Though Maddie is from Sugar Land and Tae is from Oklahoma, we can kind of claim them, too, as they met each other right here in Dallas. — CG

Felly at Trees
Young Felly describes his sound as a “fusion of hip-hop, feel good shit, reggae, jazz and al little bit of trap combined.” And it’s really working out for him thus far. While still a senior in college, he’s already racked up millions of plays for the multitude of tracks on his SoundCloud page. Gyyps also performs. — CG

The Comedy Get Down at American Airlines Center
UPN’s 1998 lineup is back together again in live stand-up comedy form. We kid! But Charlie Murphy, Eddie Griffin, D.L. Hughley and Cedric The Entertainer will share one stage in Dallas this weekend. — CG

Hedwig and the Angry Inch at Winspear Opera House
Anybody who owned a copy of the 2003 charity tribute album Wig in a Box — which included local boy Ben Kweller’s supergroup The Bens turning in a gorgeous rendition of “Wicked Little Town” — can attest to the strength of this punk rock musical’s soundtrack. Needless to say, the tunes in this one are badass enough to stand alone, even for someone who has never seen the stage production or the 2001 theatrical version. The same could be said for the reverse, too, really: Even without such kickass tunes, Hedwig‘s tale is one of the most life-affirming thing’s you’ll ever see. — CG

Dirty Dancing at Inwood Theatre
Is there a more quintessential dance movie than 1987’s Dirty Dancing — other than Breakin’ 2, of course? Thanks, in part, to a killer soundtrack, it was the first film to ever sell a million copies on VHS, for whatever that’s worth. At least this weekend you won’t have to try and track down a VCR to re-watch it. — CG

Banda MS at Verizon Theatre
La Banda MS is gigantic. Hugely popular, yes, but with 16 members it can really fill a stage. The banda hails from Mazatlan, Mexico where Sinaloa music is a staple. Sinaloa got its roots in the 1920s, and has always featured a wide assortment of instruments. Think marching band and mariachis. — Roberto Aguilar

Bear’s Den at Kessler Theater
Have you noticed how many bands there are these days with the word bear in their name? There’s Boy & Bear, Bear Hands, Minus the Bear, Panda Bear, Grizzly Bear, Bear in Heaven, Cowboy Indian Bear, The Teddy Bears, The Honeybears and Sunbears!, just to name a few. To be clear, Bear’s Den is the Brit-folk band that’s been closely associated with Mumford and Sons thus far in its young career. — CG

Nick Guerra at Hyena’s (Dallas)
This Dallas boy and Last Comic Standing favorite released his first comedy album last year. Now he’s back doing some hometown shows this weekend only. Oh, and here’s a clip of him performing on The Tonight Show With Jimmy Fallon. — CG

Lucero at The Rustic (Free w/ RSVP)
Lucero frontman Ben Nichols encompasses a wide range of styles from breakneck punk rock to country — influences that are all held together with his emotive, raw vocal cadences. It’s made them the favorite bar band of every place between here and Tennessee. And you catch them for free at this Uptown bar, provided you RSVP beforehand. — Calvin Cashen

1980s Valentine’s Prom at Double Wide
Like doing things a little differently for Valentine’s Day? Put on your fave retro ’80s outfit and head to Double Wide to dance your heart out at their 1980s Valentine’s Prom. Not the dancing type? Instead of being a wallflower, take some classic prom pictures, snack on food from Easy Slider and take in performances by Dallas Hall and Oates cover band The Rich Girls, and New York’s Dezi 5, who’ll be covering Beyonce’s Lemonade. on this occasion. — Hannah Steiner

1001 Tintype Portraits at 1001 Wine & Spirits
Tintype, basically, is a 19th-century photography method that takes its sweet ass time to complete. But the results? They’re kinda glorious, which explains why sessions normally run between $60 and $160. — Scott Mitchell

Halloween in February: A Benefit for Miss Fortune of The Flametrick Subs at Three Links
Just a week after celebrating Gorehounds frontman Howard Kelley’s first show back after a year-and-a-half battle with cancer, another punk rocker has been diagnosed with it. Fuck cancer! Help relieve some of Miss Fortune’s medical bills. Ghoultown, Flametrick, The Necro Tonz, Mr. Lewis & the Funeral 5 and Blood Letters perform. — CG

Alejandro Escovedo at Dan’s Silvefleaf
“Old, cool Austin is officially dead,” or so tweeted longtime Statesman contributor Michael Corcoran back in 2015. “Alejandro Escovedo has moved to Dallas.” The hip singer-songwriter performs tonight in his new hometown (close enough, anyway), which we’ve got to admit feels a little cooler since he got here. — CG

Pretty Things Peep Show at Kessler Theater
For the couples that like to push the limits this V-Day, we’ve got the Pretty Things Peepshow happening at the Kessler. What’s better than a night out seeing naughty puppets, sword swallowing, magic and, of course, burlesque? Not a whole lot. Hey, that same answer works for the question, “How much clothing will the dancers be wearing,” too, we suppose. — HS

DAM Awards at Campus Theatre (Free)
Like The Dentonite’s version of the DOMAs – but for Dentonites only. — CG

Alcest at Curtain Club
Following the release of its first demo, two-thirds of French black metal trio Alcest left the group, which slowly morphed into a shoegaze duo over the ensuing decade. Emma Ruth Rundle and Glasir open. — CG

Kiki’s Delivery Service at Alamo Drafthouse (Richardson)
Hayao Miyazaki is a legend. Really. The lowest rating he has on Rotten Tomatoes is in the high 70 percent range and he’s written and directed dozens of animated films. Celebrate Valentine’s with his classic tale of a young witch who delivers stuff on her broom but loses her power when she doubts herself. — H. Drew Blackburn

The Friend Zone at Altitude W Dallas
If not Dallas’ funnest Valentine’s party, it’ll at least be the highest. But you’ve got to buy your tickets in advance to go, none will be sold at the door. You’ve been warned. — CG

Lollie Bombs: Lowered Expectations at Viva’s Lounge
No date? No problem! Treat yo self to some burlesque on this most made up of holidays. — CG

Charley Crockett at Granada Theater
Charley returns to headline the big Granada stage for the first time since his record was recently re-released on vinyl. A fine excuse to go to the show to pick one up. Need another? Jacob Metcalf, Mur, & Tomar and the FCs open. — CG

Pints for Pups at Mutts Canine Cantina
This beer and fur baby benefit will feature Alaskan IPAs and huskies. Money raised will go to the Texas Husky Rescue. — CG

Deep Ellum Mimosa Walk
This Valentine’s edition of Deep Ellum small businesses’ monthly vinuous walks is dedicated to everyone’s favorite brunch drink, and picking up something for your sweetheart. As usual, $20 glasses can be picked up at Kettle Art, and free refills will be available at participating shops. — CG

Little D Valentine’s Market: A Mini Pop-Up at The Coterie
In this instance, Little D stands not for Denton, but local, Dallas-based craft vendors. They’ll be putting together a Valentine’s pop-up at 620 North Bishop this Saturday. — CG

Center Stage Comedy w/ Sommore at Verizon Theatre
The lineup for this show looks pretty decent. Headlined by one of the most successful female comedians ever, Sommore. She made the Guinness Book of World Records for largest crowd for a female comedian with 50,000 people in Atlanta, Georgia. Joining in the fun are Arnez J, Bruce Bruce, Felipe Esparza, Don DC Curry. — RA

The Princess Bride at Alamo Drafthouse (Richardson)
Fans of 1987 rom-com — with a heavy emphasis on the com, in this case — prepare to die, because it’s back on a big screen tonight. And what better way to renew your faith in love than with this classically hilarious tale of romance? Sure the kissing parts will make you gag early on, but by the end you probably won’t mind so much. Anybody want a peanut? — CG

From Selma to Stonewall: Are We There Yet? at Texas Theatre
From the Civil Rights Movement to the LGBTQ equality movement, this film asks how much progress we’ve made on these fronts. Rev. Neil Cazares-Thomas from Cathedral of Hope and some other speakers will be on hand to talk about these issues as well. Should be a pretty powerful experience. — CG

Nail Art By MsPattyCake Turns 1! at Double Wide
Get your nails all did up for Valentine’s Day by the v talented MsPattyCake as she celebrates the anniversary of converting her operation to its current on-the-go setup. Some of her mobile friends will be there, too, like Cottonsmith, Easy Slider and Permanent Reminders, with DJs Blake Ward and Christy Ray spinning old school hip-hop inside. — CG

Futurebirds at Dada
Zerts are what I call desserts. Tortillas are bean blankets. Youngsters that craft “a potent mix of psychedelia, alt-country, garage rock and folk” with a maturity well beyond their years I call Futurebirds. And I call forks food rakes. — CG

Jeff Dunham at American Airlines Center
We’re not really sure whether to be impressed or disappointed here. The fact that the Dallas native has become the fifth-highest-paid comedian in the U.S. behind only Kevin Hart, Seinfeld, Amy Schumer and — get this! — another fucking ventriloquist, Vegas staple Terry Fator is kinda nuts. The fact that people are willing to shell out so much money to watch a ventriloquist act in 2017 is, in itself, pretty bewildering — like you can even tell if his mouth is moving from all the way in the balcony of the AAC, anyway?! — CG

Hayes Grier at House of Blues
Vine is no longer around, but 16-year-old Vine star Hayes Grier somehow is. — CG

Comedy Speed Dating at Dan’s Silverleaf
Still dateless for Valentine’s? It’s not too late to find a last-minute stand-in — or stand-up, as it were. Anyway, after the speed dating sesh, there’ll be a free comedy show and a dance. A super cheap first date for you and your prospective V-Day accomplice. — CG