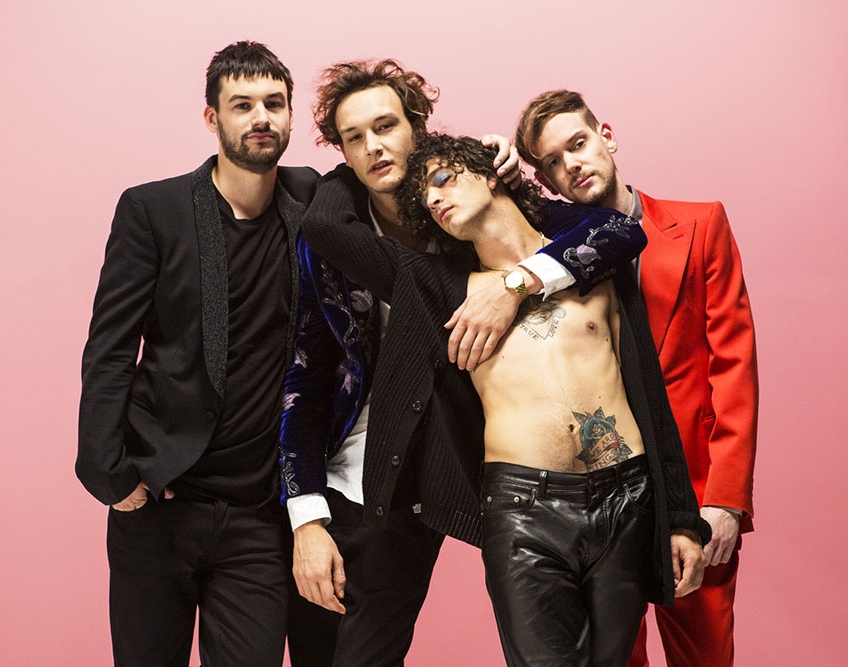 From Black Friday to Small Business Saturday to whatever the hell we’re calling this Sunday, it seems like the next several days are all devoted to shopping. And camping out in tents in front of stores. And waiting in lines. And getting into fights at stores. And wrestling people for TVs. And busting doors.

Fuck all that noise. The folks at Lifehacker have some tips on surviving Black Friday, though even they resign that shopping must be part of the day.

Fuck that noise too. Here are many other ways to “survive” the day, none of which involving rioting in Best Buys. — Cory Graves

The 1975 at South Side Ballroom
It’s hard to say exactly where Manchester dance rock outfit The 1975 took its name from. Surely it has something to do with its slightly retro-leaning influences but exactly which is hard to say. Passion Pit’s members weren’t born until the late ’80s, so no luck there. INXS didn’t come along until the late ’70s, so it’s probably not a nod to them either. They do sound vaguely like something that might have played during a John Hughes flick, but again, that was the ’80s. Oh well, it’s probably best not to think too hard about it. — CG

David Ramirez: Bootleg Tour (Live Album Recording) at The Live Oak
Don’t bother messing with shitty phone recordings of this one. Ramirez is recording all the shows on this tour. It’ll sound better than your stuff, I promise. — CG

Black Friday Record Store Day at Josey Records
Josey Records will not just be hawking other label’s collectables, its manufacturing some of its own. Like they did last year, the shop is putting out its own Black Friday record, featuring cuts from folks like Garrett Owen, David Karsten Daniels, Malik Abdul Rahmaan, Triangulum, Rache’, Rami and SPK, who’ll also be performing live in the store throughout the day. — CG

Black Friday Record Store Day at Good Records
Earlier this year, Good Records found itself in the national eye when a professionally shot video of last year’s reunion of the original Alice Cooper band on the Lower Greenville shop’s vaunted Astro-turf stage appeared in Rolling Stone to promote an upcoming seven-inch from the band. Recorded at that in-store, a limited edition record of that day’s performances of “I’m Eighteen” and “Is It My Body” will earn its release as part of Black Friday Record Store Day. — CG

The Riverboat Gamblers at Three Links
You just know anyone that rocks so hard they wind up in the hospital after a set puts on a good show. Even if the Gamblers’ frontman is a bit more cautious with his body these days, he’s still more balls out than 90 percent of other punk acts out there. Lizzie Boredom opens. — CG

Taxi Driver at Texas Theatre
Taxi Driver was the breakout film for director Martin Scorsese and Robert De Niro. It features De Niro as the iconic Travis Bickle, who takes on the eponymous role in ’70s Manhattan and gets a firsthand view at the seedy underbelly beneath the city. This film is a visceral experience and this 40th anniversary version worth viewing on the big screen for its impressive filmmaking and historical significance. — Paul Wedding

Rebirth Brass Band at Granada Theater
Rebirth got its start on the streets of New Orleans’ French Quarter in 1983. More recently, and 30 years after the fact, the outfit finally won its self a Grammy. The onetime street performers’ heavy funk sound has also fully become the sound of their city — especially in the wake of their being a focal point of HBO’s underrated Treme, may it rest in peace. — Jessica Petrocchi

The Naked and Famous at House of Blues
Describing The Naked and Famous to someone who hasn’t heard of the band is a fairly tedious task. The band’s from a country not known for producing popular acts in the United States (New Zealand); its sound doesn’t fit too well into any singular genre label (new wave? maybe post-new wave? post-punk?); and the band takes some honest-to-goodness time between releasing albums. The Naked and Famous’ fans might not be able to dispute any of those facts. But they would still tell you that, in a live setting at least, The Naked and Famous defies any preconceptions about indie acts with odd pedigrees. — Stephen Young

Vanic at Trees
The Vancouver DJ will spin a bunch stuff that will likely include a bunch of his popular remixes of songs other people wrote and recorded. — CG

Boundaries: A Night of Improvisation With Sarah Ruth Alexander and Lily Tayler at Full City Rooster
Who knows what you’ll get here – other than interesting and likely contemplative soundscapes – and probably some coffee. — CG

Tig Notaro at Texas Theatre
2012 was a rough year for Tig Notaro, who not only lost both parents but also battled breast cancer over the span of 12 months. It was also the year her comedy career really took off. That’s because, in the midst of those dark times, Notaro famously started a now legendary stand-up performance with the line “Good evening! Hello. I have cancer. How are you?” Louis C.K. said of that performance: “[It was] one of the greatest stand-up performances I ever saw. I can’t really describe it, but I was crying and laughing and listening like never in my life.” — CG

Small Business Saturday at Community Beer Co. (Free)
Please do not bust anyone’s doors down. That’s destruction of property. But do shop small. And do so at a brewery, where you can do so drunk, and where more than 50 vendors will be all parked there in one spot. Convenient! — CG

Dead Flowers’ Birthday Bash at Double Wide
Helping the DW bartender celebrate his DW b-day is Amber Farris and DJs No Dignity & Rico D. I’m sure there’s plenty of other debauchery planned for the evening as well. — CG

Bar Band does The Band at Dan’s Silverleaf
To mark the 40th anniversary of The Band’s legendary farewell concert, it released a special edition album version of the show. What’s more, former Band member Garth Hudson is out on the road touring it with a bunch of ringers and scabs. This concert is kinda like that, but without Hudson. Just Denton’s finest. — CG

Hayes Carll at Majestic Theatre
A hyperliterate lyricist in the vein of Rhett Miller and a vocalist crooner indebted to Ray Wylie Hubbard, Carll’s music is pure Texan — and in the best way possible. It swings and it swaggers, it rollicks and it bites. And, in live settings, his drunken charms are only multiplied. He’s a treasure. — PF

How Santa Got His Groove Back: A Holiday Sketch Revue at Dallas Comedy House
Thanksgiving is in the rearview. Christmas is ahead, and all its trappings – liked themed sketch comedy revues! — CG

Asking Alexandria at The Bomb Factory
This one’s for the “scene” kids. — Pete Freedman

Pirates vs Clowns at The Church
Which is scarier? Which has the better work attire? Which are the better dancers? Somewhere between one and three of these will be answered here. — CG

All Together Against Trump at JFK Memorial
There’s been a bunch of these around town lately, huh? And hundreds more all over the country. Guess folks aren’t too happy that it’s possible to get a couple million more votes than your opponent and lose a presidential election in this country. — CG

Chili Cook-Off at Lola’s Trailer Park
A dozen homemade chilis for you to try and get all judgmental about. Get there early if you want to enter. Use beans at your own risk. — CG