Things To Do In Dallas This Pride Weekend. 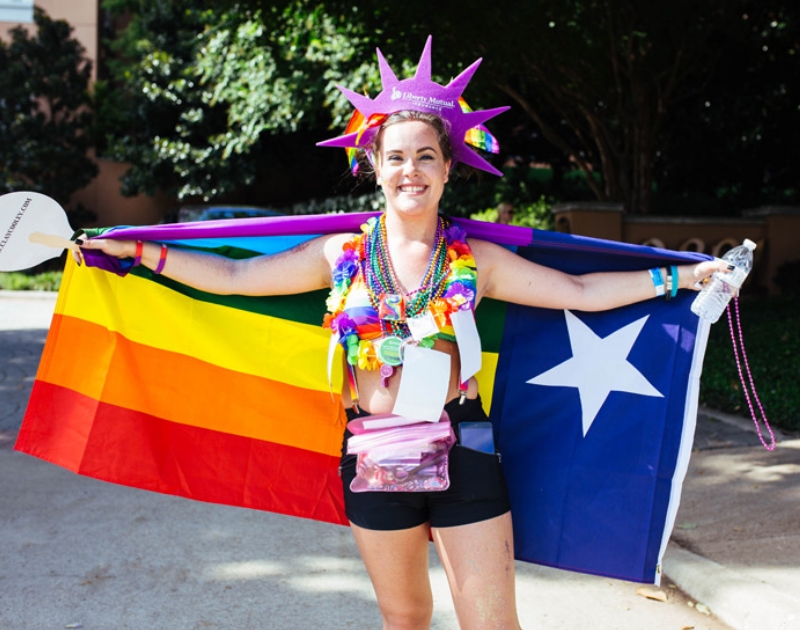 March in the 35th Annual Alan Ross Texas Freedom Parade on Cedar Springs Road, Get Your Shine on at a Dallas Pride Pool Party or Check Out Some of These Other Places to Show Your Support This Weekend.

If you’ve got five minutes, these famous composers and conductors say you can learn to love classical music.

We say in that same amount of time – or less! – you can also find something cool to do this weekend. So go ahead and throw on that 100-year-old event picking music and spend the next five minutes to read some of the blurbs below. — Cory Graves

Tchaikovsky Extravaganza at Bass Performance Hall
Friday kicks off three days of homage to the Nutcracker composer. First up is his Capriccio Italien, Op. 45, followed up by Saturday’s Violin Concerto, Op. 35 and Sunday’s Symphony No. 6, Op. 74 “Pathetique.” It’s sure not to be a kick to anyone’s nuts. — CG

Punch Brothers at Majestic Theatre
Combining traditional jazz with rock ‘n’ roll and a banjo heavy lead, The Punch Brothers have crafted a progressive bluegrass sound all their own. — Blake Lumley

Whethan at Stereo Live
The viral remix star as atop the EDM game these days thanks to collabs with heavy hitters like Dua Lipa and edits to popular songs like Posty and Bieber’s “Deja Vu.” — CG

KOLARS at Dada
The indie-rock duo beefs up its sound with a tap-dancing drummer and a few pre-recorded elements triggered by its guitar-playing frontman. Calliope Musicals opens. — CG

Roky Erickson at Granada Theater
There’s no getting around it – the psych pioneer is one of Texas’ all-time great musicians. — CG

Ceramic Animal at Three Links
The trio of suited-up brothers from Philly and a couple of their best buds make a brand of psych that’s equal parts indie for the kids and dad rock for, well, the dads. If your old man, too, liked Mac Demarco you could go off and bond here. Let’s face it, he doesn’t tell you often enough that he loves you. Monoculture and Steve Gnash open. — CG

Deep Ellum House Party at Wit’s End
This party will feature some Dallas-based bands downstairs (among the rap-rock revivalists Unity-TX and Cardi B parodist Lardi B), a slew of DJs on the rooftop patio, and various house party-themed drinks and games. Also, full disclosure, I’m one of the DJs. — Pete Freedman

Fangoria Presents: Our Lady of the Inferno at Deep Vellum
The resurgent Fangoria brand, now based here in Dallas, is apparently going to be releasing books moving forward along with bringing its old magazine to life. This event celebrates the release of that first such literary release, and with Preston Fassel in attendance. — PF

Shine at SiSu Uptown Resort
Bananas in hammocks and a DJ from New York are what this Dallas Pride pool party are all about. — CG

Reba McEntire at Toyota Music Factory
Here’s your one chance to catch the 50-time CMA nominee, don’t let me down. — CG

DSO Gala Concert and After-Party at Meyerson Symphony Center
Just in time for Pride, GCB star and classically trained soprano Kristin Chenoweth joins the DSO for an evening of her favorite Broadway show tunes. VIPs will hob each others’ knobs afterwards at an exclusive after-party. — CG

Self-Care: A Night Of Music, Art & Education at 2513 Deep Ellum
This event aims to celebrate the lives lost during this most recent run of drug-related celebrity deaths and suicides, while at the same time raising funds and awareness for local organizations that fight these societal issues. — PF

The Verve Pipe at Kessler Theater
We can’t be held responsible; you fell in love with this band in the first place. — CG

Gritznic at Longhorn Ballroom
Erykah Badu bandleader RC Williams and his The Gritz band will host its inaugural Gritznic in the historic Longhorn Ballroom’s newly-revamped backyard. The picnic-style event (said to be inspired by The Roots Picnic in Philadelphia) will feature, per its own literature, “local, regional and national acts representing the eclectic projects and side gigs of the multi-faceted members of The Gritz. Each set will feature multiple acts, jamming together on each other’s tracks — and perhaps a few covers, as well — promising a one-time-only experience for attendees.” — CG

BEAT: Dallas Pride Weekend at Stereo Live
A free shuttle whisks you back and forth between Cedar Springs and this Pride-themed dance party helmed by the legendary DJ Paulo. — CG

Pride Brunch at Perle on Maple
Fuel up for Pride weekend with some brunch crafted by celebrity chef and Chopped contestant Wade Burch, along with champagne and stories from He Said Magazine‘s Cooper Koch and Steven Lindsey. — CG

Shonen Knife at Dan’s Silverleaf
Shonen Knife is often the first band that comes to mind when someone says “Japanese punk group,” and that’s probably because of their close association with Nirvana and Sonic Youth. The group first formed in 1981 and has achieved worldwide recognition, and was one of the first Japanese bands that broke into international markets. Mind Spiders and Hey Cowboy open. — Chelsea Upton

Moon Boots at It’ll Do Club
When speaking of Moon Boots, one would likely think of footwear for astronauts, or those hideous UGG boots that will be returning in the coming months. But this is an entirely different, record-spinning figure. With influences such as funk daddy, Bootsy Collins, Boots is sure to entertain. — Sidney Johnson

Lil Debbie at The Rail Club
The White Girl Mob fell apart, but Lil Debbie’s career didn’t. She’s been steadily cranking out the flows and racking up the views on YouTube since the group disbanded. — Obed Manuel

An Intimate Acoustic Performance With Lucius at Texas Theatre
Jess Wolfe and Holly Laessig met at the Berklee School of Music, and later moved to New York together. They’ve sung on The Rentals’ latest album and San Fermin’s 2013 debut, as well as co-fronting this indie-pop outfit, which is usually a five piece. That’ll get stripped down for this intimate showing. — CG

The Fallen at House of Blues
Paying tribute to Ozzy Osbourne, Metallica, Alice In Chains and Pantera. — CG

Golf Clap at Lizard Lounge
The Detroit house duo and after-party enthusiasts will keep the party rolling till 4 a.m. — CG

Cody Canada & the Departed, Dalton Domino, Grant Gilbert at Gas Monkey Live
Them boys from Oklahoma used to roll their joints all wrong. Soon they won’t have to roll them at all, they’ll just go and pick up some pre-rolls with their medical cards. New insult time, Mr. Canada. — CG

7th Annual FOE BBQ Cook-Off at Fraternal Order of Eagles
Just remember to wait at least 30 minutes after stuffing your face before jumping back into the pool at Dallas’ favorite summer hipster hangout. — CG

A Formal Affair, Prom at the Alexander Mansion
Like high school, only it’s perfectly acceptable to spike the punch this time around. In fact, it’s probably encouraged. — CG

35th Annual Alan Ross Texas Freedom Parade on Cedar Springs Road
Dallas Pride weekend comes to a close with this annual showing of support for the local LGBT community. Bring your rainbow flag, a smile and an open heart — and leave any and all judgment somewhere else. — PF

Chefs for Farmers: The Mix Off at DEC on Dragon
The top chefs in town whip up a little liquor mop, then the real stars of the show, the best bartenders in town, create new cocktails for you to sample and vote on. It’s binge drinking, but elevated. — CG

Mugen Hoso at Three Links
Mugen Hoso is a punk band from Tokyo, Japan. But they sound exactly like an American punk band: The drums are hard, the guitar is loud, and you can’t understand what the singer is saying. Sloth Fist and Station Wagon open. — Paul Wedding

BTS at Fort Worth Convention Center
Back for round two. — CG

Game of Thrones Live Concert Experience at American Airlines Center
GoT composer Ramin Djawadi brings Westeros to town, via a live orchestra, some footage from the show and a wild set design. — CG

Scandal at The Bomb Factory
The Japanese all-girl band has nothing to do with Olivia Pope, and everything to do with the Fullmetal Alchemist: Brotherhood theme song, which they wrote and performed. — CG

Chris Robinson Brotherhood at Canton Hall
The Black Crowes’ career may have been built on the strength of its musicians — a unit that only grew stronger with a decade of constant touring — but it was frontman Chris Robinson’s energy out front and soulful vocals that initially got them noticed. It was Robinson that benefitted most from the band’s initial rise to prominence, too, as he was one of the more famous rockers on the planet in the ’90s. These days he fronts a different outfit that still features a couple of Black Crowes, though his brother Rich is noticeably absent from the group. Meaning? There won’t be any fistfights to speak of this time around, but there’ll still be plenty of good old fashioned southern-tinged classic rock to be had. — CG

“Cult of the Machine: Precisionism in American Art” (Opening Day) at Dallas Museum of Art
The exhibit, which explores the American obsession with technology in the 1910 opens this weekend. — CG

Denton Zine & Art Party at Dan’s Silverleaf
Homemade (maga)zines and art on the inside, and musics from the Drone Church on the patio. — CG

Laugh Your MASS Off w/ Dan LaMorte at Main At South Side
The former baseball player is one of the most popular comics on iTunes. Check out his latest material, when he performs alongside host Brian Breckenridge and some other local comics. — CG