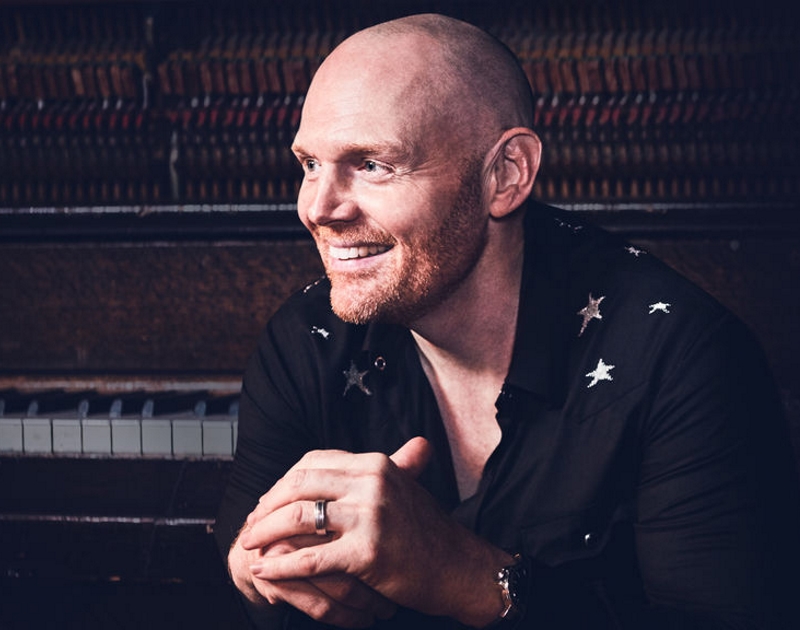 Let It Go With Bill Burr, Say Wassup to Logic, Give No Quarter to an Irving Gaming Convention, Pair Some Donuts and Beer, and Grab a New Upsetting Album.

It also might signal the end of the world.

No worries, if everything is coming to an end this weekend, might as well really live it up for as long as we’ve got left. And because that fateful hour and 43 minutes should be the only time you’re left in the dark this weekend, we’ve gone ahead and mapped out everything else going on. Let us be your guiding light. — Cory Graves

Stephen Malkmus and the Jicks at Granada Theater
When tracing alternative music back to its roots, the road always leads back to Pavement and/or The Pixies. But Pavement, unlike the Pixies, are no more. Even so, when that band called it quits in ’99, frontman Stephen Malkmus continued putting out music with his new backing band, the Jicks. The critical response varied, but we dig it: Aside from being one of our favorite albums of 2011, Mirror Traffic was quite possibly the most Pavement-like record Malkmus has written in the past decade, a trend he’s continued on multiple follow-ups, including this year’s Sparkle Hard. Soccer Mommy opens. — CG

Steve Miller Band, Peter Frampton at Allen Event Center
Noted Woodrow Wilson High School product Steve Miller — and his eponymous band — turns up in Allen Friday for set sure to be chock-full of hits. Hell, Miller’s penned more than his share in his day. And he’s now in his 70s, so you may not have many more opportunities to hear “The Joker” or “Take the Money and Run” live. And, hey, you really should. Because they’re both great. Also, some band called Peter Frampton is on the bill. — Stephen Young

O.A.R. at Toyota Music Factory
O.A.R. is a rock band known for its diverse range of music, complexly composed arrangements and use of horns. But the band’s most well-known songs are really generic sounding soft rock songs. Matt Nathansan opens. — PW

Monsta X at Verizon Theatre
Welcome the K-pop sensation as it tours through the U.S. for the second-ever time as part of a seven-city run. — Pauline Esguerra

Schism at Trees
Believe it or not, Schism is the first and longest touring Tool tribute band in the world. And its the only one to be endorsed by the original band itself. Rage tribute Rise Against the Machine opens. — Obed Manuel

Killer Queen at The Bomb Factory
She keeps Moet & Chandon in her pretty cabinet. “Let them eat cake,” she says, just like Marie Antoinette. The U.K.’s most popular Queen tribute hits town this weekend with a Pink tribute in tow. — Alex Copeland

David Archuleta at Arlington Music Hall
The American Idol season seven runner-up is still around in spite of his second place finish. He recently duetted with The Voice season six loser Madilyn Paige. He’s also got three projects on the way, including a Latin one and a Christmas one. — CG

Love Never Dies at Music Hall at Fair Park
Andrew Lloyd Weber could have called his 2010 musical Phantom of the Opera 2: Electric Boogaloo, but he, um, went a classier route. The new (by comparison) Phantom sequel runs through August 5, then it heads over to Fort Worth for a spell. — CG

Let’s Play Gaming Expo at Irving Convention Center
Want to play a game? I know this guy does. Anyway, there’ll be dozens of classic and modern videogames to played at this weekend-long convention that’ll feature tournaments and some classic arcade consoles. — CG

Bill Burr at Toyota Music Factory
You might recognize Bill Burr from Chappelle’s Show. Or from Breaking Bad, where he played Saul Goodman’s conman Kuby. Or from his countless televised appearances and sets on the late-night talk show circuit. Real talk, though, Burr’s a comedian’s comedian, and the Bill Hicks-influenced observationist is known for the George Carlin-like anger he lets fly onstage. That said, stand-up is his fortress. Tonight, you’re welcome to enter it. — H. Drew Blackburn

Dallas Hip-Hop Dance Festival at Majestic Theatre
Teams from around the country dance battle it out for the title of DHDF 2018 Champions. It’s safer than dancing outside an unmanned moving vehicle. — CG

Ziggy Stardust ft. Ronnie Heart at The Rustic
Next in line for The Rustic’s new tribute series — following odes to Selena and Willie Nelson — is David Bowie, who’ll be celebrated by Ronnie Heart. Stay tuned for a Dolly Parton edition in the coming weeks, too. It’s free with RSVP at the link above. — CG

Texas Latino Comic Con 2018 at Latino Cultural Center
Like other comic cons, except this one highlights Latino artists, writers and other creaters in the comic book community. Latino character cosplay encouraged. — CG

Bo Burnham Q&A’s
The comedian is in town attending four screenings of his film Eighth Grade, which he wrote and directed. He’ll start at Angelika Plano, then it’s onto the Dallas location, then over to AMC Northpark and finally the Alamo Drafthouse in the Cedars. You can read our review of the film right here. — CG

American Aquarium at Statler Ballroom
After going through a couple dozen bandmates over the years, BJ Barnham found himself without a backing band at all in the spring of 2017 when every member of his current lineup left him. He wasn’t always the best bandmate or dude, he’s since admitted. But he’s back, cleaned up his act, had a kid, regrouped with a solid new backing outfit and released the appropriately titled LP Things Change. After potentially ending it all last year, I’d say they’re in a better spot than ever right about now. Dalton Domino opens. — CG

[Daryl] at Double Wide
Following its big reunion show at this year’s Homegrown Fest, [Daryl] is back for its second show in many years, playing all the classics, and signing your old Buzz Oven CDs. Quiet Company opens. — CG

Static Diary (Album Release) at Dan’s Silverleaf
Scott Danbom is one of those weighty names in the local scene and beyond. His time with Centro-matic and as a sideman to Sarah Jaffe has done much to cement that legacy. For a musician so lauded, and whose bio mentions decades of songwriting experience that began with grade school composition contests, it’s crazy that this Static Diary project is his first release as a solo artist. Margaret Chavez (read: the solo project of Pleasant Grove’s Marcus Striplin) opens. — CG

Lera Lynn at Kessler Theater
Lynn made an appearance in the second season of True Detective, contributing some original tunes to the show as well. A subsequent album release, she told NPR at the time, was influenced by the dark and moody program. Time is a flat circle? Oh, and Claire Morales opens. — CG

Infinity Journey at House of Blues
Hold on to that nostalgic feeling that this Journey tribute evokes. Come on, people, don’t stop believing. — CG

Johnny Rodriguez at Stagecoach Ballroom
For lots of these old country dudes, the outlaw tag is just that, a branding effort to say they make music not quite like the popular stuff on the radio. Rodriguez has been in jail, though, for supposedly stealing a goat, which was immortalized in David Allan Coe’s “Long Haired Redneck.” Oh, and one time he killed a guy. Look it up. — CG

Terri Clark at Billy Bob’s
Terri Clark is a Canadian country star who has been playing music since the mid-’90s. She is currently on her 10th studio album, and many of her other ones have made the Top 5 on Billboard‘s charts. In Canada, she has taken home a plethora of awards that probably encompass her entire mantle. — Roberto Aguilar

Desperado at Granada Theater
It’s not easy to afford the outrageous prices to catch the real Eagles play places like AT&T Stadium, but this is not that bad a substitute. It won’t set you back too much, either. Plus, Foreigner tribute Cold As Ice opens. — CG

Kingdom Hearts Orchestra at Verizon Theater
To drum up some pub for next year’s Kingdom Hearts III, a full orchestra is touring the country playing pieces from the popular crossover franchise’s score while clips from the videogame play on a giant screen. — CG

The Assassination of Jesse James by the Coward Robert Ford at Texas Theatre
Before Casey Affleck was an Academy Award winner or #metoo poster boy, he upstaged Brad Pitt in this in this epic, 160-minute western. If the mere sight of his face doesn’t irk you out, the movie screens in 35mm this Saturday. — CG

Wade Bowen, Luke Pell at The Rustic
Following a recent vocal surgery that sidelined his band for a few months, Wade Bowen’s back at it. He brings the gentle country this weekend alongside former Bachelorette loser Luke Pell. The real question is do you accept this rose? — CG

Logic at Dos Equis Pavilion
With two No. 1 albums and a critically-hailed Grammy’s performance all in the past year, the conscious rapper is one of the most gifted and respected MCs in the game. Audiences appreciate him, too, necessitating him playing in 10K-plus cap amphitheaters like this one. NF and Kyle open. —

Oh, Weatherly (Album Release) at The Prophet Bar
Last fall, this young Dallas band announced signing with Hopeless Records, the label home of such as Circa Survive, Bayside, Avenged Sevenfold and All Time Low. At this show, the band releases its debut for the label, Lips Like Oxygen, co-produced by Jake Bundrick of Mayday Parade. The Happy Alright, Newhaven, NU-95, Forever Starts Today and Bedside Manor open. — CG

Aqua: Autograf at SiSu Uptown Resort
Fuck that no glass by the pool rule, this wet and wild party features bottle service and a world class DJ. — CG

Royce Da 5’9″ at Trees
Once popular in the Detroit rap game, the rapping half of PRhyme is back spitting out rhymes like he had nearly two decades ago, only to smaller audiences. The one-time Eminem collaborator is in town, but for a limited time only, so catch him while Mr. 5’9″ is still sorta warm. — Evan Henry

Sleepy Zuhoski, Sammy Strittmatter (Double Album Release) at Main At South Side
The debut record from Garret Zuhoski finds his acoustic singer-songwriter material gussied up by venerable Dallas producer Salim Nourallah and The Polyphonic Spree’s Nick Earl, who added tight drums, lots of synths, space noises and a phone-like quality to the vocals — a few common elements that help tie these genre-spanning collection together into a cohesive LP. — CG

Donut & Beer Pairing at L.U.C.K.
Donuts and Beer, now that’s a good combo. If you want a seat, then plan to arrive early since 100 seats are available for the public. A ticket does not guarantee a seat but will guarantee the entree and drink. — Juan Betancourt

Dan Johnson (Album Release) at Magnolia Motor Lounge
The Fort Worth singer-songwriter’s new Hemingway Project album is a nod to his Operation Hemingway charity that aims to decrese the rate of veteran suicides. Johnson’s veteran father took his own life while suffering from PTSD. A powerful message/song/album/cause. — CG

Summer Sale at Stag Provisions
Come for a haircut (courtesy of Brass Tacks) and complimentary cocktail, and stay for the great deals. Among them, Stag’s offering up 20 percent off all apothecary goods this weekend. — CG