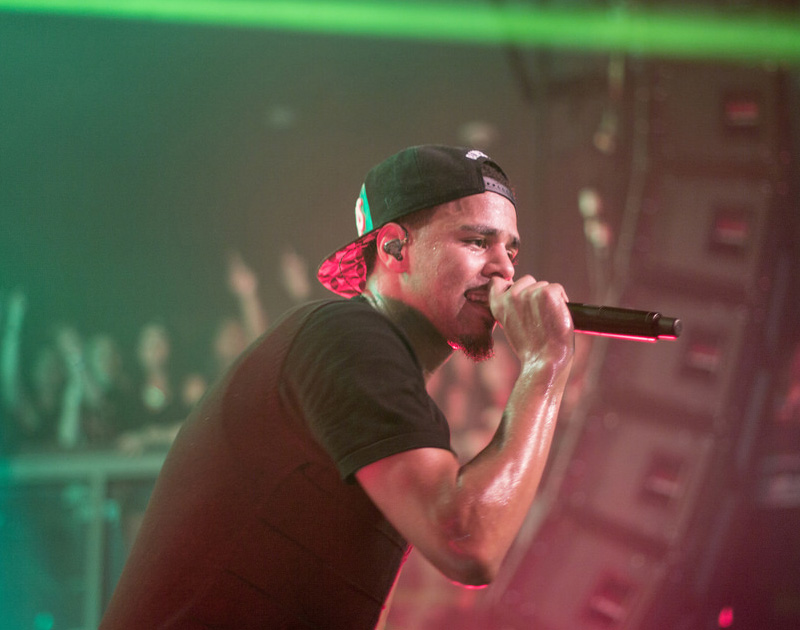 Celebrate 40 Years Of Foreigner, Rally Against White Supremacy, Vibe With J. Cole And 52 Other Things To Do This Weekend.

There’s all sorts of food pop ups nowadays: tacos, cupcakes, ramen. You name it. But what about a pop up that coats everything with Cheetos dust?

A  pop up in Manhattan served up everything from Cheetos meatballs to Cheetos pickles and even Cheetos cheesecake this week. Those who attended the three-day eatery were even able to wash down their cheesy meals with a Cheetos milkshake.

We can’t really speak to the tastiness of these dishes, but one thing is almost certain: if they made this Hot Cheetos dust instead of regular, they’d have half of Dallas waiting in line for a taste.

But hey, if you’re looking for some regular food options this weekend or just some live tunes, then feel free to peruse this list of weekend happenings . — Pauline Esguerra

Fleet Foxes at The Bomb Factory
This Seattle six-piece is all about those indie tunes, like, so much so that each song can be paired with a craft beer. OK, maybe not that indie, but you get the point.  — PE

Tyler Farr at Billy Bob’s Texas
Tyler Farr hasn’t released a new album, since 2015, but back in May, he debuted a new single titled “I Should Go To Church Sometime,” so maybe a new project is on the horizon for the Nashville star. — OM

Van Jones at House of Blues
Get woke with this CNN commentator and author of The Green Dollar Economy when he speaks about everything from the economy to current events and politics. Dallas Mavericks owner Mark Cuban will be making a special appearance. — PE

Marty Friedman at Trees
The former Megadeth guitarist stops in town to prove that he can still rock it as hard as he did in the ’90s. Scale The Summit, The Fine Constant and Th Adam Nanez Band also perform. — PE

Sugar Free: Jackal, Luca Lush at RBC
Dance along with these disco dancing rhythms and body pumping beats to start your weekend. And even take a chance winning at Super Smash Bros. or Mario Kart while you’re at it. — PE

Urban Pioneers, From Parts Unknown at Three Links
Break out your boots and seek some rowdy thrill with some cowboy country tunes. — PE

Paper Street, 8 Minute Fall, Wells Machine, The Overheads at The Dirty 30
Check out this fully local line up of bands trying to make their hometown proud. — PE

Cinewild Presents: Priscilla The Queen of The Desert at Texas Theatre
Enjoy this free showing of the film staring Hugo Weaving as drag queen Anthony who takes on Australian outback with some friends in a colorful bus they name Priscilla. A drag queen show will follow the film screening — PE

Late Nights at The Dallas Museum of Art
This Late Night Friday’s theme is all about female empowerment and the feminist movement. Celebrate women with live music, lively discussions, yoga and exclusive one-night only art exhibits. — PE

NTX Slamfest at Action Park Grand Prairie
From BMX to blades, skateboards to scooters, this festival is crowded with only the most eXtreme athletes, plus eXtreme bands and more. (Spelling of “eXtreme” intentional.) — Alex Copeland

One Minute Play Festival at Trinity River Arts Center
Catch rapid-fire performances of these micro-plays on the big stage Saturday, Sunday and Monday. Local playwrights, directors and actors show their stuff in 60-seconds or less. — AC

Alice Cooper at Starplex Pavilion
School’s out, but not for much longer. Celebrate your lack of classes and principals with the rocker who has neither class nor principles while you still can. — AC

Midnight Brunch at a Secret Location
There are no party crashers at this midnight meal. You only learn the location of this exclusive party with the purchase of a ticket. Cocktail attire recommended. — AC

Carolyn Wonderland at The Kessler Theater
Golden pipes made for blues over seriously sizzling guitar licks with a side of killer, ambling solos. — AC

Battle for Playing With Fire Fest at RBC
A cavalcade of bands from around the metroplex and beyond including The Drop Deadlys, Third & Delaware, Ryeden, Through Blind Eyes and more. — AC

Noise at The Prophet Bar
Noise joins forces with Sun City, Sons of Ena and 9Electric and others to rock your face off. — AC

Gary Allan at Billy Bob’s Texas
Check out this platinum selling California singer belts out archetypal country ballads and tunes. Or not. See if we care. — AC

Cirque du Burlesque at Viva’s Lounge
Cirque Du Soleil is a little off putting, what with the gangly acrobats and clowns performing the stunts. But with burlesque performers doing all the juggling, acrobatics and more? Now that’s a show. — AC

ABBA Tribute at AT&T Performing Arts Center
Here they go again. My, my, how can you resist them? — AC

Vanna Farewell Show at The Dirty 30
Vanna is closing out strong with their All Good Things tour. In an Instagram post the band reassured fans that “this isn’t goodbye forever, it’s just a ‘we’ll see you around.’” That said, take advantage of this show. It might be a while. — AC

Dallas Against White Supremacy March
If you’ve been moved by the news as of late, don’t just sit there. Take action. — AC

Local Brews, Local Groves at House of Blues Cambridge Room
Local breweries will be giving you a taste of their brews while local musicians let you sample their beats. Beastie Boys tribute band Rhymin’ N Stealin’ will perform. — Obed Manuel

The Fixx at Granada Theater
This British band plays new wave rock with an abstract vibe that ‘s all its own. — PE

Mayday at Curtain Club
This hip hop group straight out of Miami is bring its hardcore, jarring beats all the way from South Beach. — PE

Money Man at Gas Monkey Live
The Atlanta Soundcloud rapper is in town because he’s tired of Soundcloud money. He wants that real money. — PE

Peticolas & Hypnotic Donuts at Peticolas Brewing Company
What’s more fun than getting a sugar rush going while you’re buzzing? Well, plenty of things, but least here you get to enjoy some beer with some donuts. — PE

The Wake ‘Em Up Tour at Texas Theatre
Enjoy a night full of laughs with actors and standup performers. Brandon T. Jackson, Real Judah’s and Young Peezee all make an appearance. — PE

Icarium at The Rail Club
This instrumental progressive rock band based out of Fort Worth wants to give you a chance to listen music without having to listen to someone whine about their dad. Luke Boyce will also be performing. — PE

Bowling For Soup at The Aardvark
Because Mexican good sucks north of here anyway. — OM

WWE SummerSlam 2017 Watch Party at Henderson Tap House
The biggest superstars face off: Natalya and Naomi duke it out for the Smackdown women’s championship, John Cena and Baron Corbin settle a feud and Brock Lesner’s Universal Title is up for grabs in a fatal four-way with Samoa Joe, Roman Reigns and Braun Strowman . — AC

The Wild Detectives Book Club: The Dime at the Wild Detectives
Dissect The Dime, a gritty crime-thriller based in The Big D featuring society wives, Mexican drug cartels and cult leaders. You know, all that typical Dallas stuff. — AC

Noogy, The Ellen Degenerates, Gutter Villain, Casual Relapse at Three Links
That’s grunge, garage, hardcore and all kinds of rock n’ roll that we could spend time trying to peg into whatever microgenre they fit into, but when it comes down to it, it simply rocks. — AC

Do the Right Thing Tour and Book Signing at Texas Theatre
Filmmaker and author Curator Brandon Harris presents a screening of Spike Lee’s 1989 Do The Right Thing. A discussion of the film and Harris’ memoir Making Rent in Bed-Stuy follows. — AC

Art & Soul Festival at The Dirty 30
Pop up shops, sneaker raffles and art exhibits. But that’s not all! Live music, poetry and art performances to stimulate the mind, food trucks to satisfy your gut and booze to sate your thirst. — AC

Mingling Over Mimosas at African American History Museum
Networking is more essential than ever and while that’s something you can do at just about any event, it doesn’t hurt to hit up one that specializes in hooking up with likeminded people. Listen to some soul and R&B classics, sip on bottomless mimosas and make some new contacts. — AC

All Migos Everything at RBC
Get down and immerse yourself in the music. Listen to DJ sets by thejohnstewart, Blue and The Misfit while watching Migos’ music videos projected around the room. — AC