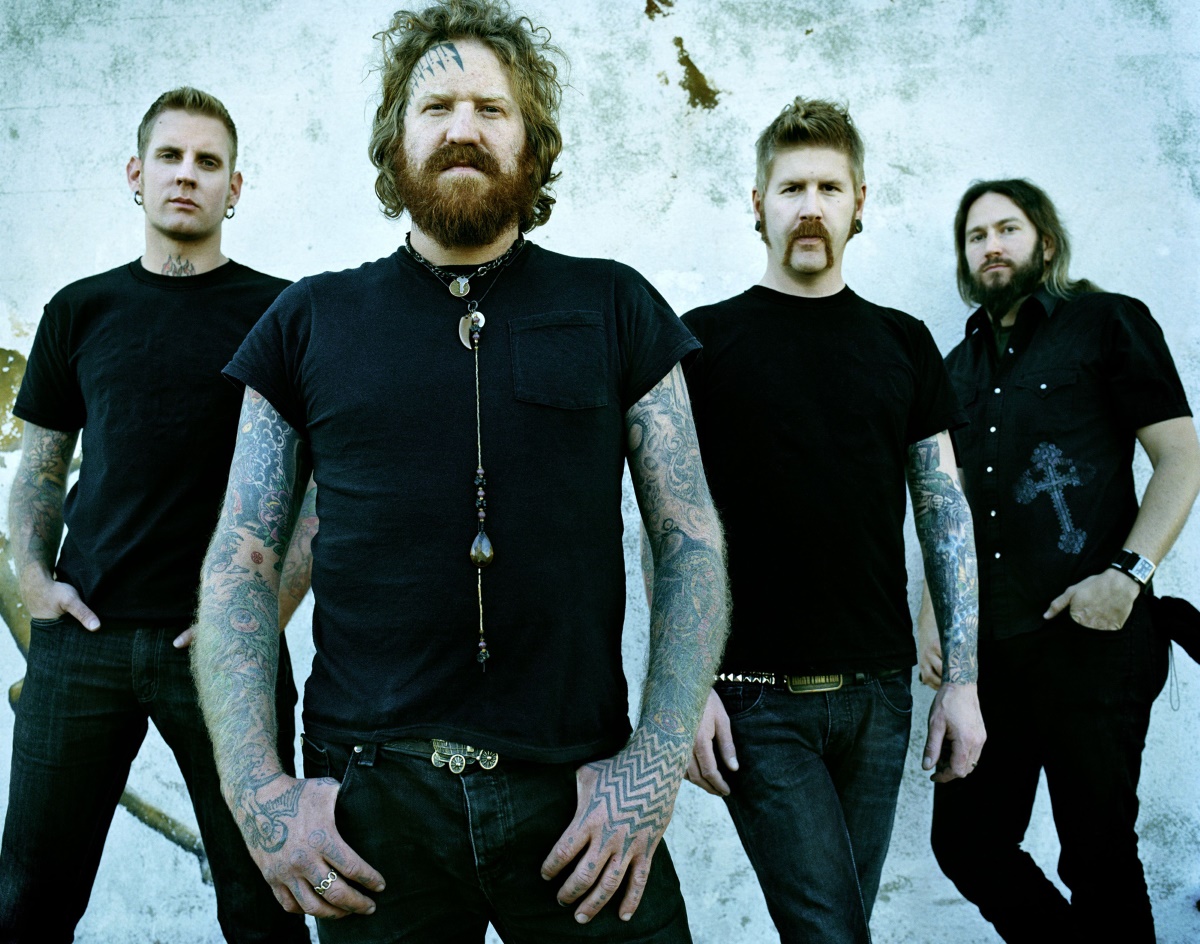 I’m not sure how he got ahold of it, but somehow a horse got his chompers on a rubber chicken. Watching the video of said incident will undoubtedly make your life better. Promise.

I’m also not sure how you plan on spending your weekend, but I’ve got some ideas that may or may not make these next three days a little better. Will it be horse with a chicken good? Maybe! — Cory Graves

Kehlani at South Side Music Hall
Born as dancer and falling victim to a traumatic knee injury, the Bay Area singer and hip-hop artist began to captivate crowds across the country with her other talents, selling out larger and larger venues each time she’s swung through.Talk about a fast rise. — Evan Henry

Mastodon, Eagles of Death Metal at Gas Monkey Live
Heavy metal is one of those seemingly niche genres that seems perpetually about to fade from the mainstream. But every time it looks to be on its last legs a new torchbearer emerges. Just as Pantera did in the ’90s, Mastodon has been in the late ’00s and ’10s. But Mastodon’s mix of sludge and proto metal has caught on with a wider audience than just the typical metalhead crowd – hence the ability to bring along acts like EODM as openeers. And for what it’s worth, Mastodon is probably one of the more vocally-talented heavy outfits around. — CG

The Black Angels at Granada Theater
Maybe the most prominent psych torchbearers out there, Austin band The Black Angels is touring behind its new release. Like its band name itself, the album title, Death Song is taken from the Velvet Underground track “Black Angel’s Death Song.” A Place to Bury Strangers, with its blistering wall of sound, opens. — CG

Paula Poundstone at Majestic Theatre
She was named one of Comedy Central’s 100 greatest standup comedians in 2004, so Paula Poundstone must be doing something right. Known for her outrageous suit-and-tie combo (it’s outrageous because she’s a woman), you might remember Poundstone from the ’90s, or, as a frequent contestant on NPR’s Wait, Wait Don’t Tell Me if you’re the type that gets up early-ish on the weekends.– Chelsea Upton

Planned Parenthood Benefit Show at BackYard on Bell
The rare Denton appearance for the Mercury Rev will go down this Friday – and for a good cause. Every donation offered up here will go straight to Planned Parenthood. Other musicians donating their time include Baptist Generals, Claire Morales, Kim Nall, Robert Gomez and a ton of others. — CG

Elm Street Music and Tattoo Festival at Three Links and Trees
House Harkonnen, Rude King, Duell, a circus sideshow and others are supposed to perform, and acclaimed tattoo artists from all over the country — including the winner of the most recent season of Ink Master — will be doing work inside Trees. — CG

DDFW Master of the Mic Dallas: Round 1 at The Dirty 30
DdFWMoM is back for a third season. Round One of the Dallas qualifiers in this rap competition kicks off tonight. It’s $25 to throw your hat in the ring, and the contest is capped at 10 competitors. — CG

Here Come the Mummies at House of Blues
Chalk it up to internet culture, but it’s no longer good enough just to be a bunch of badass musicians playing really fun R&B and funk tunes. Now you’ve also got to do that while wearing mummy costumes and throwing in innuendos about jizzing your pants. — CG

Miguel Bose at Music Hall at Fair Park
The Latin superstar (who grew up hanging around Pablo Picasso and Ernest Hemingway, for reals) is celebrating his 40 years in the business with this career-spanning tour. — CG

Moonchild at Dada
We all know that Erykah Badu is the Queen of Neo-Soul, one of the earliest participants in the updated rougher, tougher, hip-hop-tinged, down-to-Mars version of soul. A couple decades later it’s easy to see who she built a foundation for, and who will gladly carry the torch when it’s ready to be passed. Hell, last time Moonchild — an unassuming band from L.A. that gives off a magnetic hippie vibe — came to town, they even covered a Badu deep cut, “Time’s a Wastin.” Respect the creators. — Porttia Portis

The Bellamy Brothers at Billy Bob’s
Let your love for the ’70s pop country crossover sensations flow like a mountain stream. Let it grow with the smallest of dreams. Let it show and you’ll know what I mean. — CG

Pearl Earl, Pollen RX, Loafers at Armoury, D.E. (Free)
This one was initially supposed to serve as the Pearl Earlians’ album release. Alas, that anticipated disc isn’t quite ready. Never fear, Loafers will have a new EP to hawk at this one. Not to mention the fact that these bands are worthy of your attention even on nights when they aren’t celebrating new releases. — CG

SOLUNA: Music and the Brain at Dallas City Performance Hall
An interactive lecture and performance by a couple of Ph.D.s and some DSO brass players exploring the neuroscience of music and creativity. — CG

Smile, Smile Again at Ochre House
The surreal new Justin Locklear musical recently made its world premiere at this theater. It’s about a soldier in the middle of some trench warfare during WWI but, really, it’s about so much more. Like what? Well, this is your last chance to find out, for now. The play ends its debut run on Saturday. — CG

Brunch on Broadway: Into the Woods at Alamo Drafthouse (Cedars)
The Broadway musical is currently in the midst of a run over at the Winspear. In conjunction, the Alamo is screening the 2014 movie version while serving up specialty brunch items. And your weekend will end up happily ever after. — CG

Elm Street Tattoo Festival at Trees and Three Links
Along with the multitude of tattooers still over at Trees doing their thing, bands like Riverboat Gamblers, Shonen Knife and Lizzie Boredom will be tearing it up across the street. — CG

El Palote Beer Dinner & Vegan Food Pairing at On Rotation
Four veganized takes on authentic Mexican fare from El Palote Panaderia, each paired with a local craft brew from On Rotation, two of which were brewed just for the event. — CG

All Them Witches at Dada
All Them Witches is a rock band from Nashville with a layered, ominous sound that the name of the band is meant to forebode. The songs are densely composed with no one clear genre influence in their music. The band is known for its lyrics as well, focusing on a narrative structure on songs that engross the listener into every facet of its music. — Paul Wedding

Conor Oberst at Granada Theater
Before his Granada set – more specifically, at 3 p.m. – the bright-eyed singer-songwriter will perform an acoustic set of cuts off his new Salutations album live from the Astroturf down the street at Good Records. That one is free, but the full band set is gonna cost you something. — CG

Dennis Quaid & the Sharks at Gas Monkey Bar N’ Grill
Yes, it’s that Dennis Quaid. Yes, it’s those sharks. The actor is just the latest in a long line of Kiefer Southerland, Bruce Willis and Johnny Depps to chase the rockstar dream. — CG

Metalachi at Shipping and Receiving
One of three shots to catch the world’s only heavy metal mariachi band in town this weekend. They played last night in The Colony, and they’ll head back to Dallas. But for today, they’ll be going off the rails on un tren loco out Fort Worth way. — CG

Behind The Rhymes Interview & Influence Award Presentation w/ The D.O.C. at Josey Records (Free)
N.W.A. ghostwriter The D.O.C. will be at Josey discussing his life and career with local producer Sikwitit and taking audience questions. Nobody does it better. — CG

Head for the Hills Rally at Hillside Village (Cedar Hills)
Choose your destiny: this rally boasts 20, 40 and 60 mile routes. Each comes with a beer and a burger, so there’s really no wrong turn. — CG

Malcolm X Festival at Pan-African Connection Bookstore
Malcolm X reportedly once said, “People change. Don’t give up on our youth.” The organizers of this one are taking those words to heart, with an event that’ll feature speakers, music, dancing and other activities meant to educate and engage the next generation. — CG

Elm Street Music and Tattoo Festival at Three Links and Trees
While the lot of world famous ink masters ply their craft at trees, bands like Metalachi and a Cars tribute will perform across the street. — CG

Three Links Garage Sale
Buy/sell cool art, clothes and other collectibles – if only to pay off that bar tab. — CG

SOLUNA: “Ultra-Seeing: The Mandala Pattern” at Nasher Scupture Center
An experimental film instillation “from the perspective of synesthesia.” Not sure exactly how that works, but should be interesting, as synesthesia is a phenomenon where a person’s brain perceives a single stimulus as multiple cognitive responses — like when certain letters, numbers or sounds make you see certain colors. — CG

Further Jazz at The Wild Detectives
Out there sounds from Chicago sax man Dave Rempis, and other experimental jazz musicians, including Dallas’ own Yells at Eels. — CG

Bishop Briggs at Cambridge Room
The British-born electro-popper has been racking up “next big thing” tags, especially after her recent Coachella set, and even more so with this recent string of sold-out North American tour dates. Seriously, all her most recent live reviews have been glowing. — CG

Wildflower Arts and Music Festival at Galatyn Park
Shooter Jennings, The Outlaws, Ruthie Foster and a bunch of tribute bands close out the fest. — CG

AT&T Byron Nelson Grey Goose 19th Hole at Four Seasons Resort and Golf Club
The outcome of the golf game — the last year it’ll be held at this particular course, for whatever that’s worth — be damned, partying in The Pavilion is like a Dallas rite of passage in some socioeconomic circles. — CG

The Bloody Mary Fest at Commerce Event Center (Dallas)
Ten spots known for their over-the-top brunch drinks — including Taverna Rossa, Henry’s Majestic, Fixture and Top Knot – are serving up three hours of unlimited Bloody Mary’s. I think that makes this the best kind of fest there is. — CG