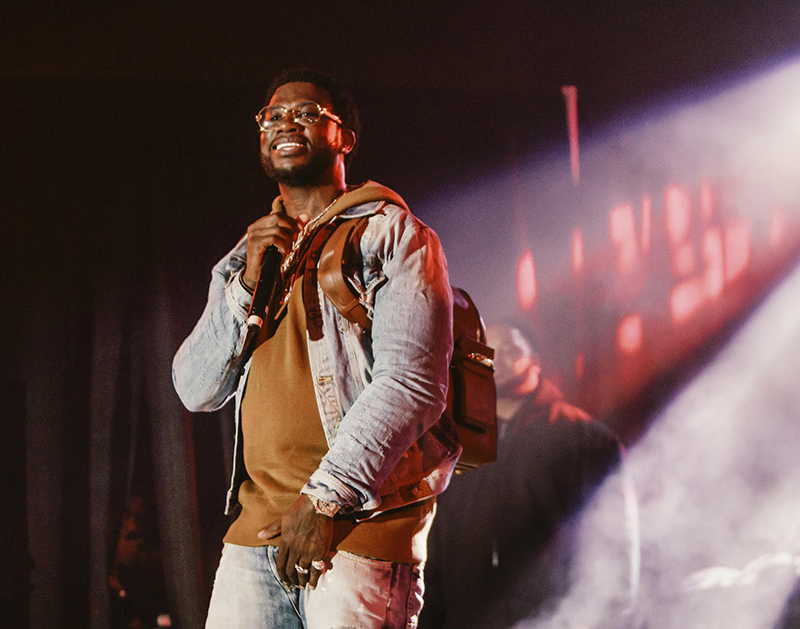 Make Damn Sure With Taking Back Sunday, Get Trapped With Gucci Mane, And More To Do Around Dallas This Week.

If you need some motivation to start preparing for the week ahead, then look no further than professional poker player Walter Fisher, who found himself $100,000 in debt in July of 2016.

He started eating massive calorie amounts at the poker and blackjack tables and eventually gained about 50 pounds, leaving his body fat percentage at 33 percent. Overweight and indebted, a few poker friends approached him around December and collectively bet him $1 million that he couldn’t lose the weight and reduce his body fat to less than 10 percent in six months.

But Fisher didn’t need six months — he did it in four. And his friends had to pay up, allowing him to pay off his debt and rebuild his bankroll.

This week, maybe you’ll make some friends who are well-off and will bet you a $1 million dollars to do something Fisher-esque. Maybe you’ll find these rich friends at one of the following upcoming events.

If not, you can still have plenty of fun regardless. — Obed Manuel

National Tequila Day at Happiest Hour
Can it truly be the happiest happy hour without tequila? — PE

The Bachelorette Watch Party with Luke Pell at Chelsea Corner
Watch Dallas’ own break out the roses. — PE

National Tequila Day at El Bolero
Frozen, on the rocks, with salt, with sugar— anyway you take it, it’s hard to go wrong. — PE

RavenEye at Prophet Bar
Heavy rockers from the UK hop the pond on their latest tour. — PE

Playboy Carti at South Side Music Hall
Wake up like this. — PE

Bike Night: 2 Wheel Tuesdays at Mother Truckers
Having your biker event on a Tuesday is one way to weed out the weekend warriors. — PE

The Bodyguard at Music Hall Fair Park
For fans of Whitney Houston and the motion picture classic of the same name, here’s the musical adaptation you’ve been waiting to come to town. — PE

Rozwell Kid at Three Links
Noise pop that’s out of this world. — PE

Sabrina Carpeter De-Tour at Majestic
Why? Why not? — PE

The Wind Rises at Angelika
Another epic tale with the theme of finding one’s self in the world. — PE

Raw Dallas: Fixate at GMBG
The latest in Gas Monkey’s ongoing exploration of arts and culture in Dallas. — PE

Dynamite Rabbit at The Rustic
So misunderstood. — PE

Woolly Jammeth, Whiskey Wednesday at Sundown at Granada
Half off whiskey and jams. — PE

Bears Among Men, Samsara, Dispositions and more at The Rail Club
Your weekly dose of heavy metal. — PE

Khalid at House of Blues
Send me your location. — PE

This Wild Life at Club Dada
California-based rock duo brings their acoustics to the next level. — PE

Josh Heinrichs at Gas Monkey Bar N’ Grill
You pick my feet up off the ground. — PE

Generation Idol, Sedated at Trees
Tribute bands for your Thursday. Reminiscence on your favorite rock artists—Billy Idol and The Ramones. — PE

Sheri Shepherd at Arlington Improv
You’ve seen her everywhere from The View to Everybody Loves Raymond. Now see her on stage. — OM

Vans Warped Tour at Starplex Pavilion
She said “What?” and then I told her that I didn’t know. — OM

Mark Chesnutt at Billy Bob’s
Honky-tonk with an attitude. — PE

Michelle Branch at Kessler Theatre
All you wanted was somebody who cares. — PE

August Alsina at House of Blues
Man he luv this shit. — PE

A Life In Waves at Texas Theatre
A glimpse into the world of electronica. — PE

Texas Queerlesque Festival: Rhinestone Riot & Rainbow Revolution at Viva’s Lounge
The same type of thing but if you aren’t into dancing, at least you can watch. — PE

Nickelback at Starplex Pavilion
Enough with the memes, and look at this photograph. — PE

Slightly Stoopid at The Bomb Factory
Every single genre of music you can think of into one clusterfuck genre. — PE

I Am Rapaport Stereo Podcast at Texas Theatre
Funny and opinionated. — PE

Rock Against Alzheimer’s at Trees
Live rock music with a cause. — PE

Lady Miss Kier at It’ll Do Club
NYC based DJ has an east coast groove. — PE

Strangelove at House of Blues
English rock band travels across the pond with some Beatles vibes. — PE

Vesperteen at Curtain Club
We all make a different sound when we break. — PE

Meek Mill at Southside Ballroom
All eyes on you. Un-featuring Nicki Minaj. — PE

Lowrider Expo at Fair Park
For those who love to ride low. — PE

Balcones and Ironroot Whiskey Dinner at Rye
Some craft food and drink to grub on. — PE

The Endless Summer at Texas Theatre
Some surfers prefer the hairy thrill of a big wave. — PE

School of Rock Continental Tour Finale at House of Blues
Your last chance to see some young talent. — PE

Lonely Hearts Benefit Show for NAMI at Opening Bell Coffee
Rock out to your favorite Beatles tunes and participate in a raffle for a good cause. — PE

Claude Von Stroke at Sisu Uptown
Like Claude Monet but except art on a canvas, it’s art on the track. — PE

Cover Photo by Karlo. X Ramos. To find out what else is going on today, this week and beyond, check out our event directory.