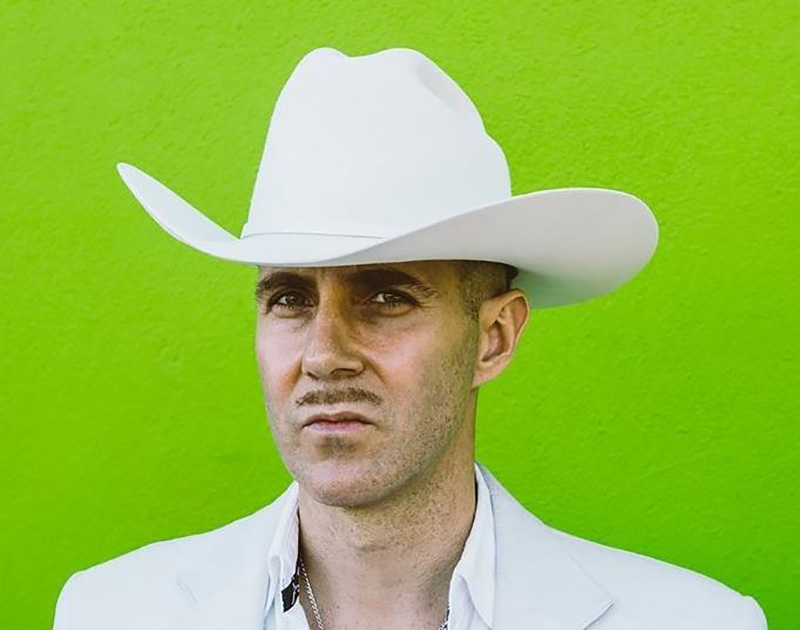 Look On The Brightside With The Killers At Toyota Music Factory, Say Sorry With Josh T. Pearson At Dan’s Silverleaf And Celebrate Five Years Of Community Beer Company.

So here we are again. The weekend has arrived once more. You’re probably reading this article to find out what you should get up to tonight and the rest of the weekend. You’re probably also like “Holy shit, wasn’t it just the weekend, like, five minutes ago?”

It may be a sign that you’re getting older. Seriously. Per a Scientific American article (*adjusts glasses*), that feeling that time is going by really fast may be linked to getting older. In a 2005 study, participants who were older than 40, said it felt like their childhoods went by slowly but time ramped up as they entered their teenage and young adult years.

But before you start feeling like an oldie, the article also states that the feeling of fleeting time may also be a result that you’re living your best life, as Oprah would want you to.

So while you’e out and about this weekend at one of the following events, if it feels like the weekend went by too fast, it’s probably because you had a bomb-ass time. — Obed Manuel

Pink Floyd Laser Spectacular at The Bomb Factory
Prepare to take a trip to an alternate dimension with this light and sound show themed to the music of the classic Pink Floyd. — OM

The House Harkonnen at Three Links
One of Dallas’ loudest bands wants to rock your face off. But the guys aren’t doing it alone. The Virgin Wolves and Slow Seers are going to help. — OM

Prawn at Prophet Bar
Prawn is an indie emo band that really makes you feel the feels. There’s a lot of American Football influence here so if you like them you might like this. Caravela, On Better Terms and Sylvania Ave also perform. — Paul Wedding

Children of Indigo at Deep Ellum Art Company
Funk can sometimes get a bit stagnant, dipping far too low into a jam and staying there. But Chilldren of Indigo mix up their brand of funk with some hip hop and steady vocals that keep their tunes going. See what we mean at this show. — OM

Margo Price at Kessler Theater
Willie Nelson said it was a great compliment that Margo Price wanted to do a duet with her. And while the country singer doesn’t need validation from a man, it’s Willie Freaking Nelson, a god of the country game. All this goes to say is that Price clearly has the chops, explaining why this show is sold the hell out. — OM

Flans at Majestic Theatre
The Mexican pop group saw its popularity peak in the ‘80s and ‘90s. Despite a breaking up a few times, however, the Ilse, Ivonne and Mimi aren’t calling this a reunion. Instead, they’re calling it a celebration of all the fans who supported them throughout the years. — OM

Joe Bob Briggs Live at Texas Theatre
Explore the history of rednecks and why God loves them with the Grapevine comic and movie critic who is the go-to guy to guy when it comes to learning about rednecks. — OM

Alex Aiono at Trees
The Phoenix, Arizona music producer may have gained his fame from “flipping” popular songs, but since going viral, he’s already dropped three EPs and various singles. Come ready to dance, though, ’cause things will be poppin’. Trinidad Cardona opens. — OM

Josh T. Pearson, Danny Diamonds, Claire Morales at Dan’s Silverleaf
The Denton singer is back in town. His storied past is strange and at times it seems like he’ll never show up to play shows anymore, as he hinted at back in 2011, but he’s here in town tonight. And that’s all that matters. — OM

Dallas Fuel Overwatch League Watch Party at Mac’s Southside
Join the Dallas Fuel esports team as it hosts its first ever watch party. The #BurnBlue squad will give away Dallas Fuel T-shirt and wristband to the first 100 attendees. The games start at 8:30 p.m, but there will be a line. In case you don’t make it into Mac’s, there will be an overflow watch party at Industry Alley bar. — OM

Buffalo Ruckus at Sundown at Granada
Buffalo Ruckus is a band straight out of Denton, TX. With both rock and country james in its repertoire, Ruckus weaves in an out of subgenres like Americana, psychedelic, and avant-Garde experimental country rock. Trippy but homey. Works for us. — Kelly Benjamin

Ritmo Nights at Mercado 369
DJ Rikki Rincon will be playing all the merengue, reggaeton, salsa, house and world music your little dancing feet can handle. A bailar. — OM

BooM BooM PuM at Wits End
A $5 cover gets you in for a night of dancing, art and supporting the Latinx community at this new monthly event. — OM

Adan Jodorowsky at Club Dada
The French-Mexican musician and director is bringing his own brand of pop cumbia that will make you want to both dance and sway from side to side. MAYTA and Clemente Castillo will also perform. — OM

Trouble N’ Texas Festival at RBC
This two-day festival kicks of at 3 p.m. both Saturday and Sunday. Check the event page for the lineups for both days. — OM

Mad Mexicans at Curtain Club
The name may be somewhat aggressive, but in case any gringos might be too afraid to show up, rest easy. This local band is all about exposing crowds to Mexican culture and folklore through its blend of hip hop, jazz and rock and roll. Garden of Thorns and Neptune Locals also perform. — OM

The Killers at Toyota Pavilion
Talk about having a successful career, huh? Since bursting onto the scene in 2004 with Hot Fuss, The Killers has been a rolling ball of rock and roll that pretty much everyone can agree is great. — OM

Encrypted, Hiawatha, Aztec Death at Armoury D.E.
This trio of bands will be putting on a show that will tap into all your anarchist feelings and tendencies. You may not be able to burn it all down, but you will at least be able to rage. The music starts at 9 p.m. — OM

Vandoliers at Shipping & Receiving Bar
The DFW local alt-country group was formed in 2015 and released its debut album Ameri-Kinda in 2016 and followed it up this year with The Native, an album that landed the group on Rolling Stone Magazine’s “Top 10 New Country Artists You Need To Know” list in may. The band has a honky-tonk twang with an alternative rock vibes flowing through to it, making this band’s sound a rare breed. — Lauren Keuning

The Birthday Party Project at The Bomb Factory
At the sixth Birthday Party Project event, attendees are once again tasked with dressing up as their favorite childhood toys. The purpose? To put a smile on children’s faces, specifically children who are living in homeless and transitional facilities. All tickets sales go toward throwing birthday parties for kids partnered with the Birthday Project. — OM

’90s-’00s Hip Hop Vinyl Sale at Spinster Records
This two-day sale will see Spinster Records putting hip hop vinyls for as little as $1-2 a pop. Can’t beat that kind of a deal. — OM

Epic Lao Fried Chicken & Noodle Pop Up at The Stoneleigh
If you’ve been itching to party at The Stoneleigh, here’s a chance to do that and stuff your face with some delicious fried chicken from SAAP Lao Chicken. There’s no cover to get in, so all you have to worry about is bringing money to pay for food. And drinks, of course. — OM

Onesie Bar Crawl
The bar crawl kicks off at Backyard Dallas/Bottled blonde. There are still some tickets available. A purchase gets you into each participating venue and a drink at each stop. — OM

The Dangerous Summer at The Dirty 30
Having hinted at a new darker vibe with the release of “Valium” a couple of days ago, the band will surely be playing tunes from its newest self-titled album that dropped just 24 hours ago. Microwave, The Band Camino and sad cops also perform. — OM

KUZU Dimensions at Andy’s Bar
This Denton music extravaganza will feature all the KUZU DJs, Sunbuzzed, Francine Thirteen, Mind Spider, Thin Skin and New Science Projects. Music starts at 8 p.m. and the event will take place at all three levels of Andy’s. — OM

Off With Their Heads at Three Links
If you’re looking to rage at a straight up punk rock show before the weekend’s over, Off With Their Heads would typically have you covered. But the Chicago punk rock band is stopping in town to go acoustic on our asses. Ben Roy, Jt Habersaat, Seth Anderson and Ben Mccracken also perform. — OM

Wolf Parade at House of Blues
The California indie rock band’s 2017 album, Cry Cry Cry, was described by Pitchfork as the band’s

6th Annual Hypnotic Donuts Polar Plunge at F.O.E.
This year’s Polar Plunge will feature a four-person relay race. Donations raised will go to the Greater Dallas Chapter of the Alzheimer’s Association. The polar plunge is at 4 p.m. Don’t be late! OM

Bombshell: The Hedy Lamarr Story at Texas Theatre
This film explores the life of Hedy Lamarr, the Austrian-born star who starred in numerous films, whose looks inspired the looks of Snow White and Catwoman and helped defeat the Nazis by creating a way to atler radio waves so they wouldn’t be decoded. Seriously. We are not making this up. She was a badass. — OM

Sleeping Giant at Trees
The Christian metalcore band will be playing at Trees just a couple of days after the release of its fifth and final studio album, I Am. Sadly, this will also be among the crew’s final shows, as the band’s final show ever is slated for February 17. — OM

Elk River Sessions Revisited at Dan’s Silverleaf
In case you don’t remember, a band of Denton musicians went up to the Ozarks last year to record an album to help a Denton local with their medical bills. And tonight, those tracks will be revisited. Courtney Jacobs and Kiel Grove perform. — OM

DK the Drummer at Deep Ellum Art Company
Darren King refers to himself as a “drum jockey.” And that’s because he incorporates songs from his favorite artists into his own original work, meaning that a track is playing while he plays. It’s highly entertaining. Sucre opens. — OM

Rhett Miller at Fort Worth Community Arts Center
The Old 97’s frontman will play this solo show in Funkytown. Joining him will be Pennsylvania singer-songwriter Matthew Ryan. — OM

Bellflower at Texas Theatre
This 2011 film tells the story of two friends who spend their free time building weapons of mass destruction, as they believe/hope that the end of the world is near. After they meet a young woman, they go out to cause damage and all hell breaks loose. Five bucks gets you into the screening. — OM

Wax Trax! Tribute at The Church
Joe Virus will be playing the tracks that came from artists signed to the the storied Wax Trax! Records, a record label that gave rise to some of the top names in industrial music. — OM