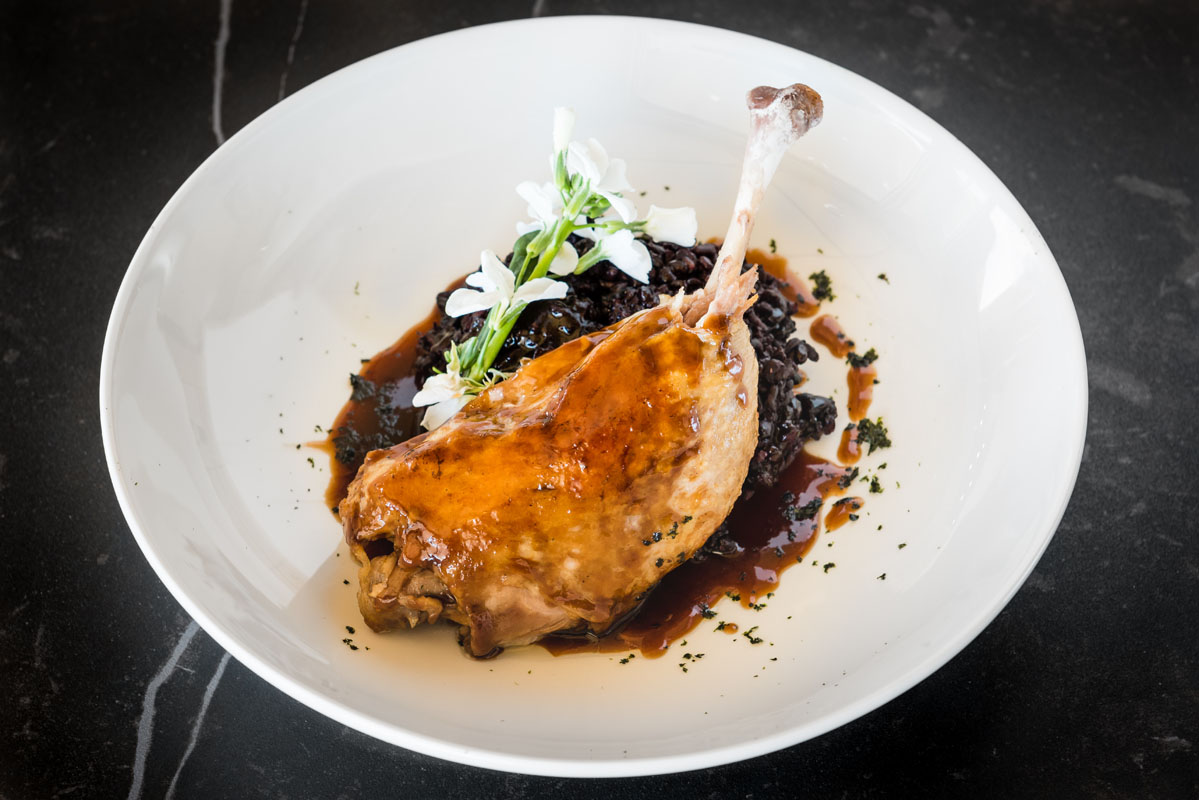 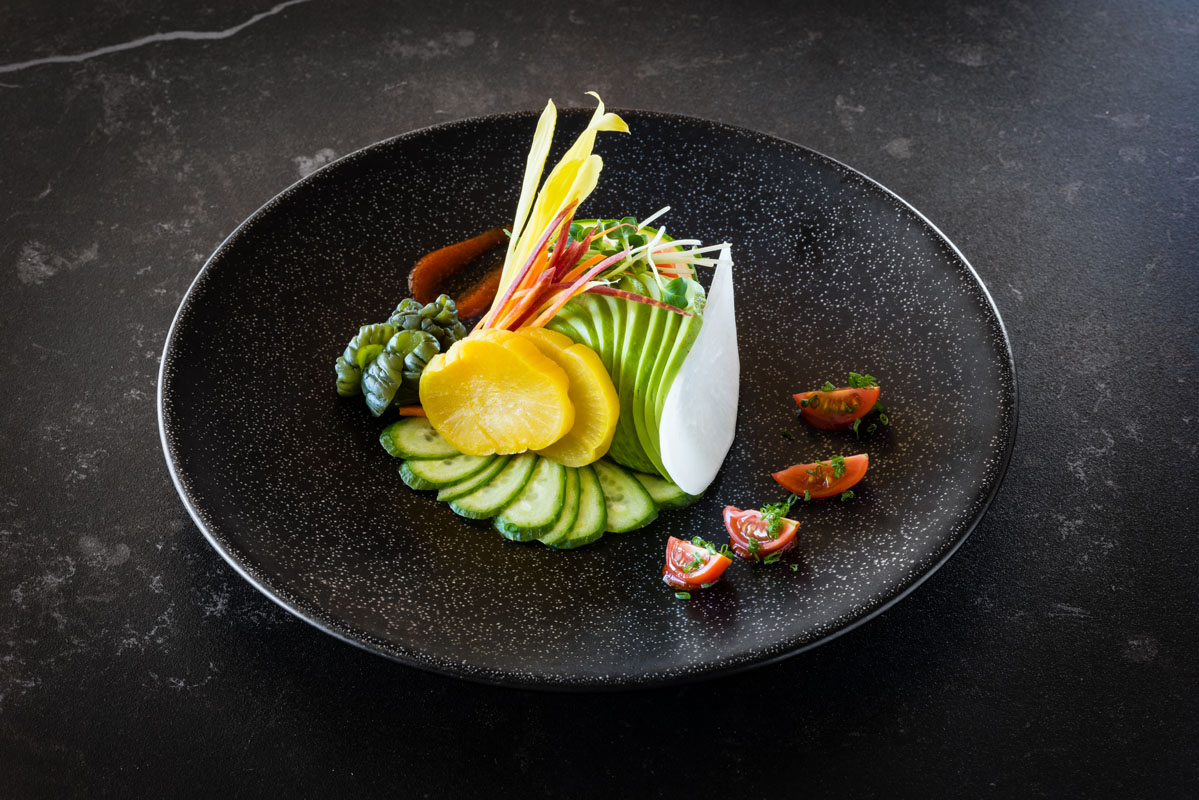 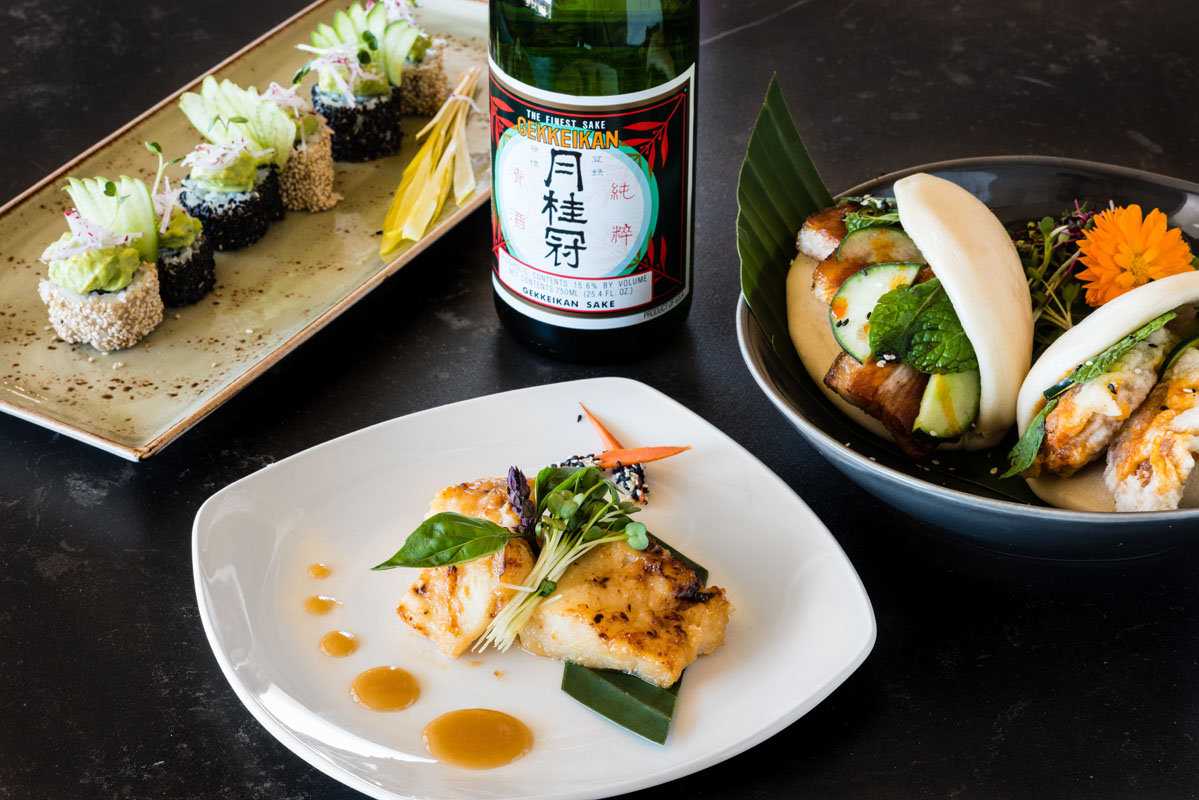 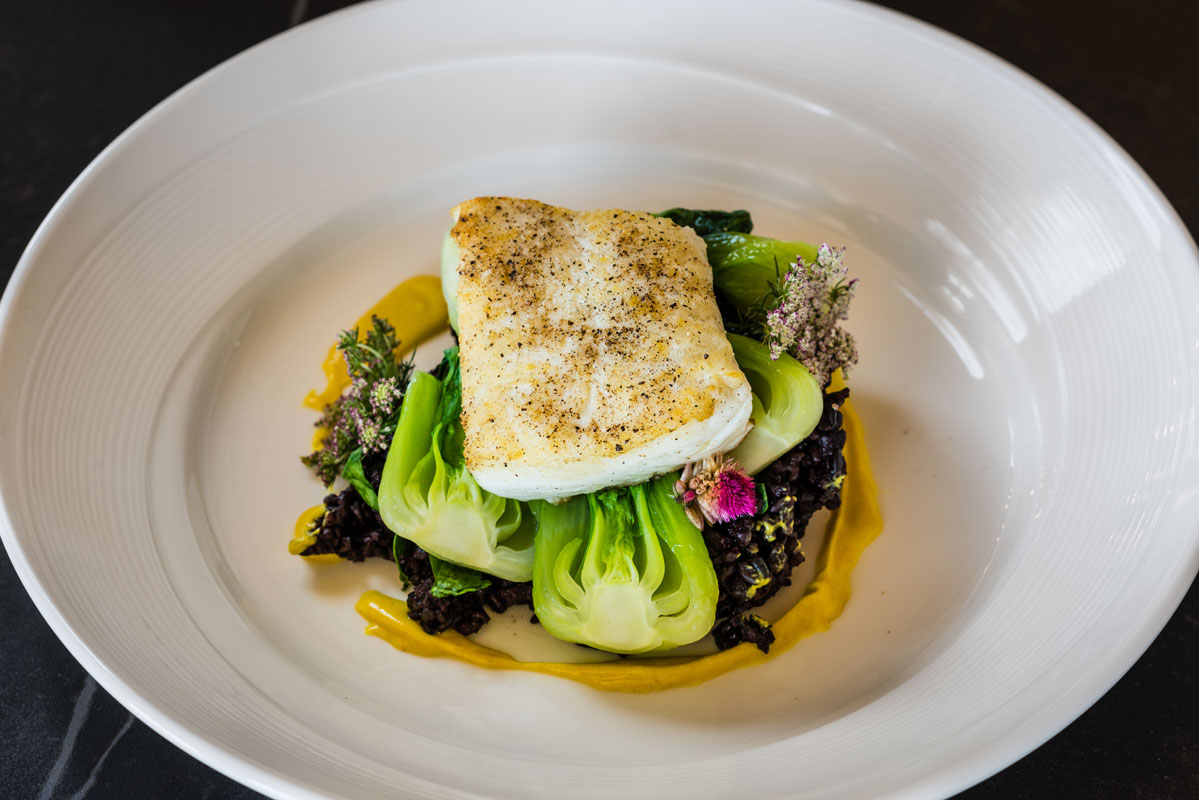 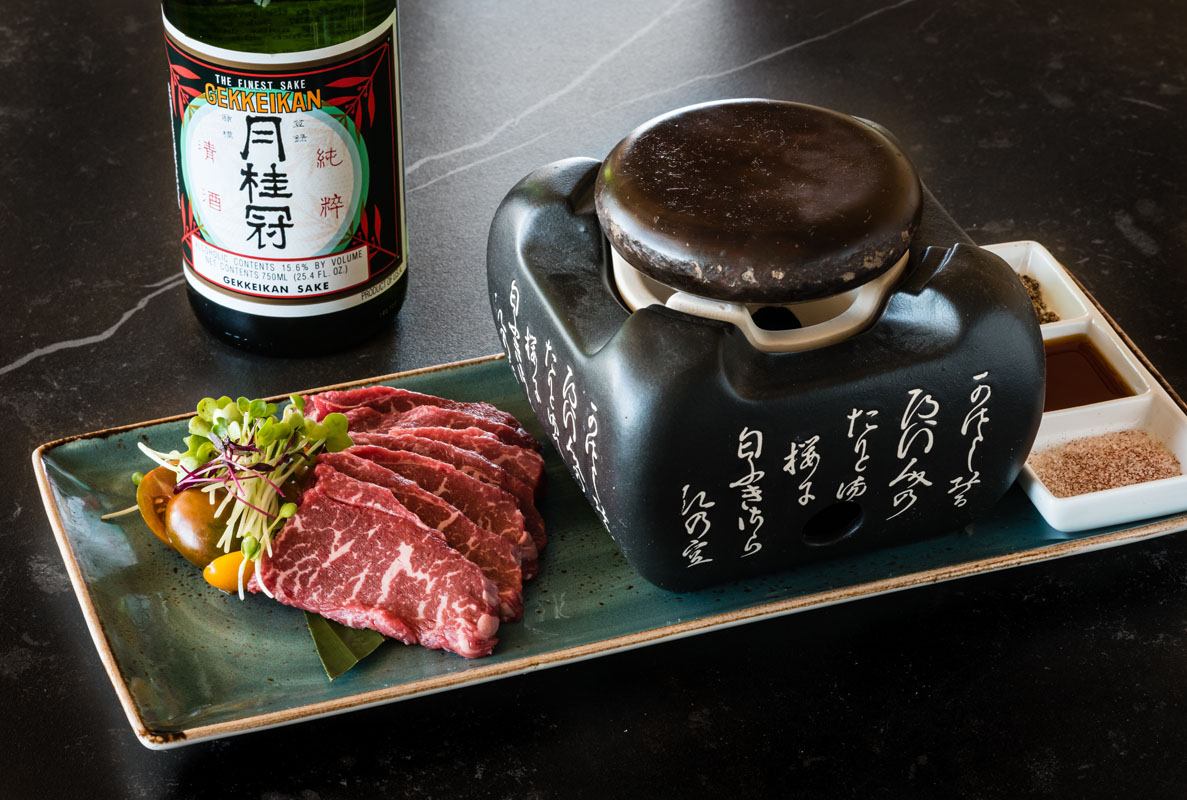 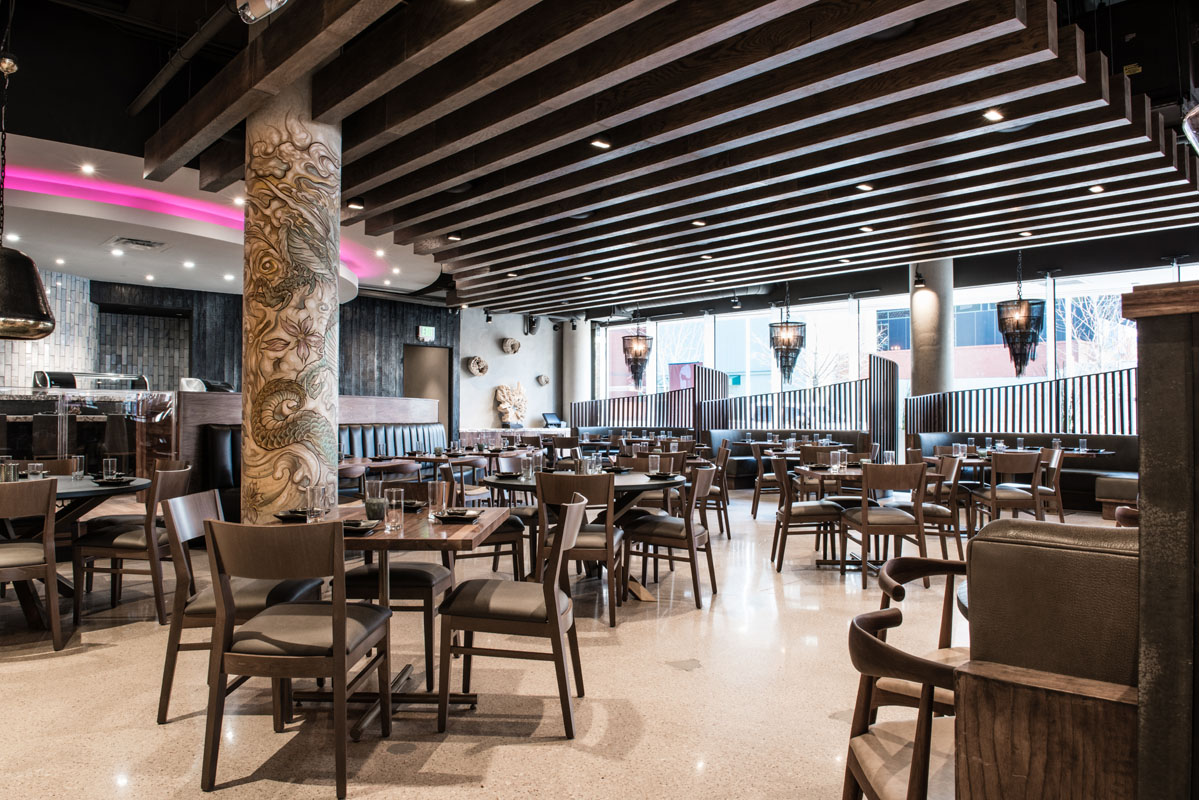 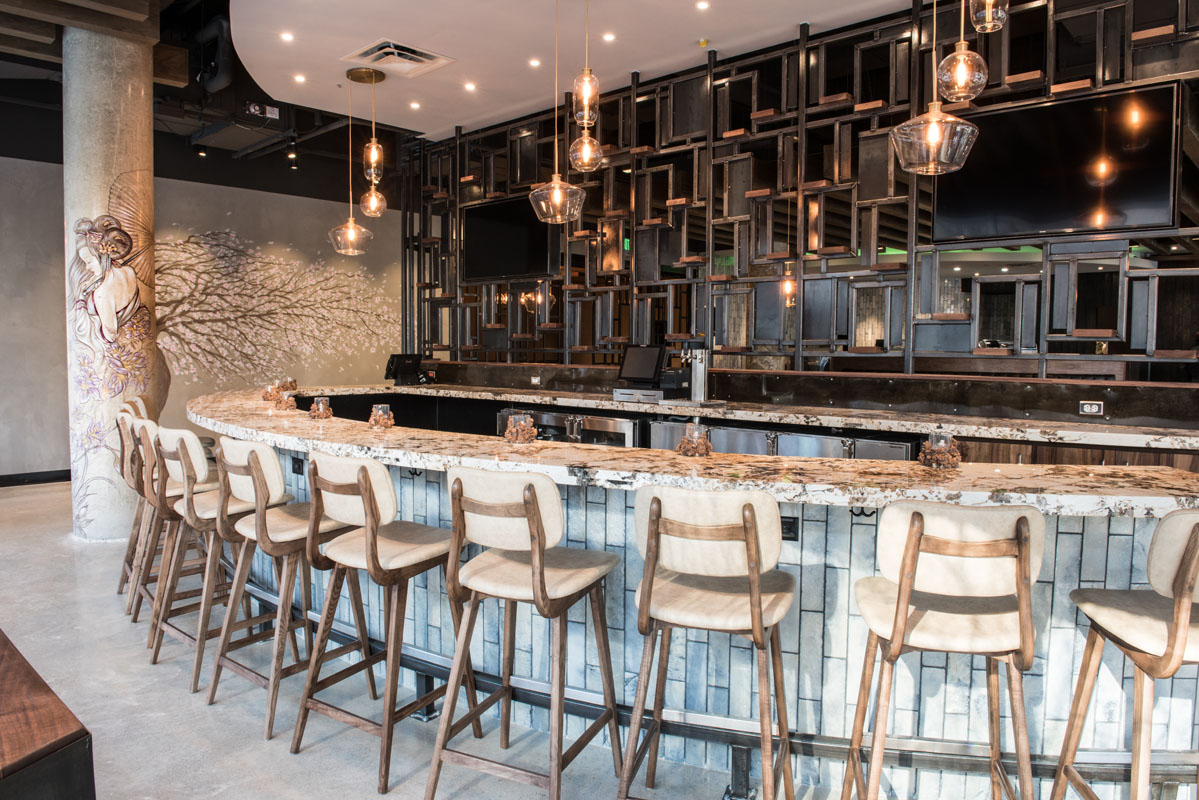 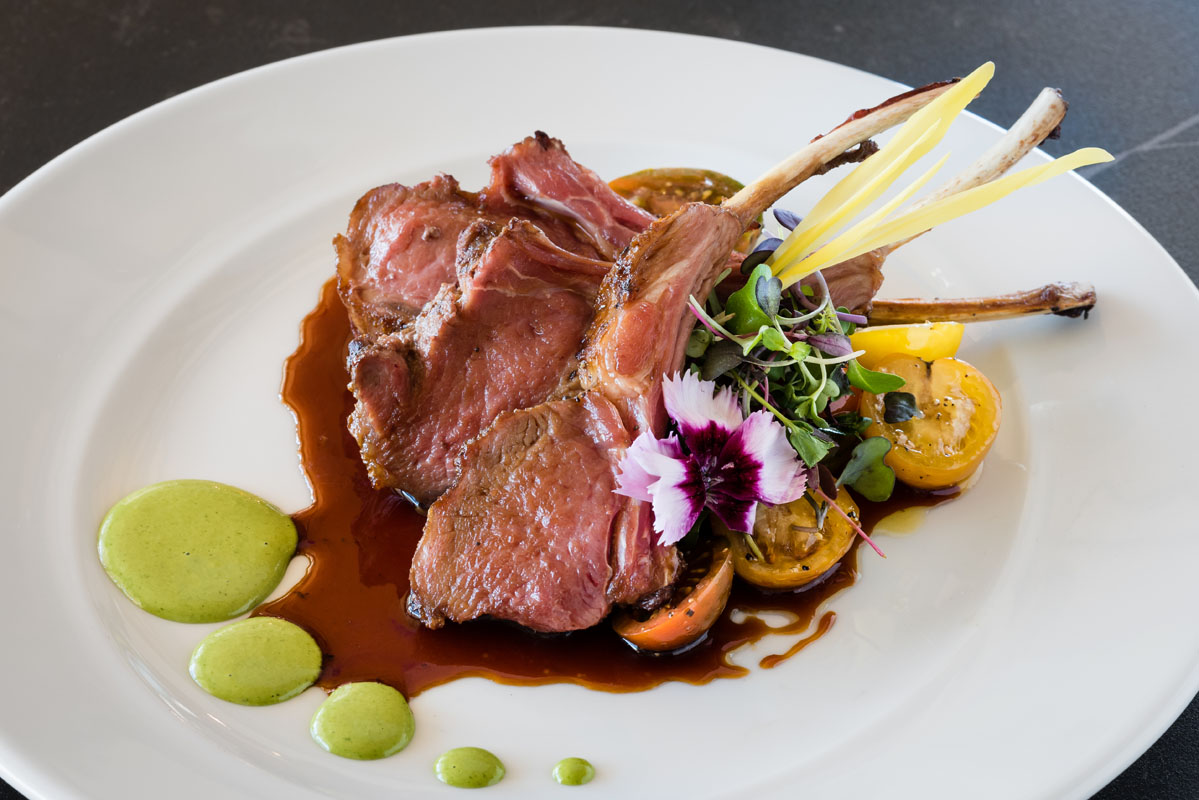 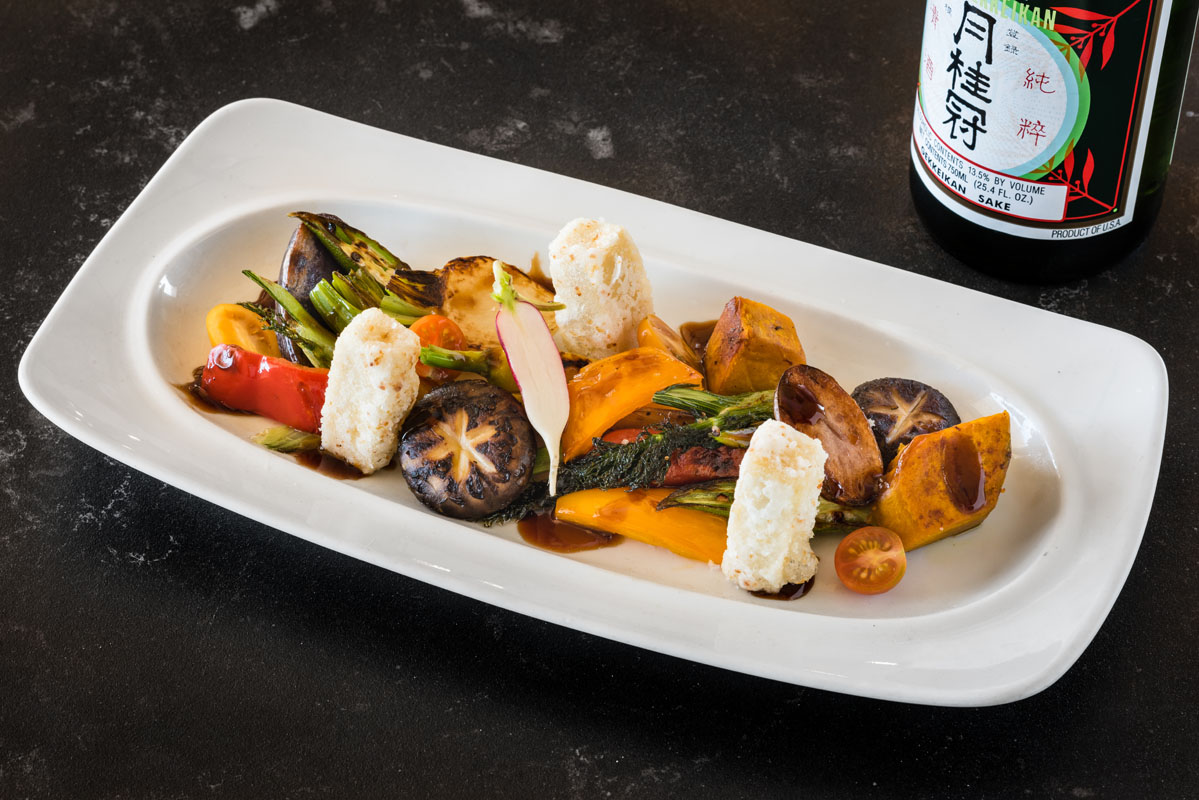 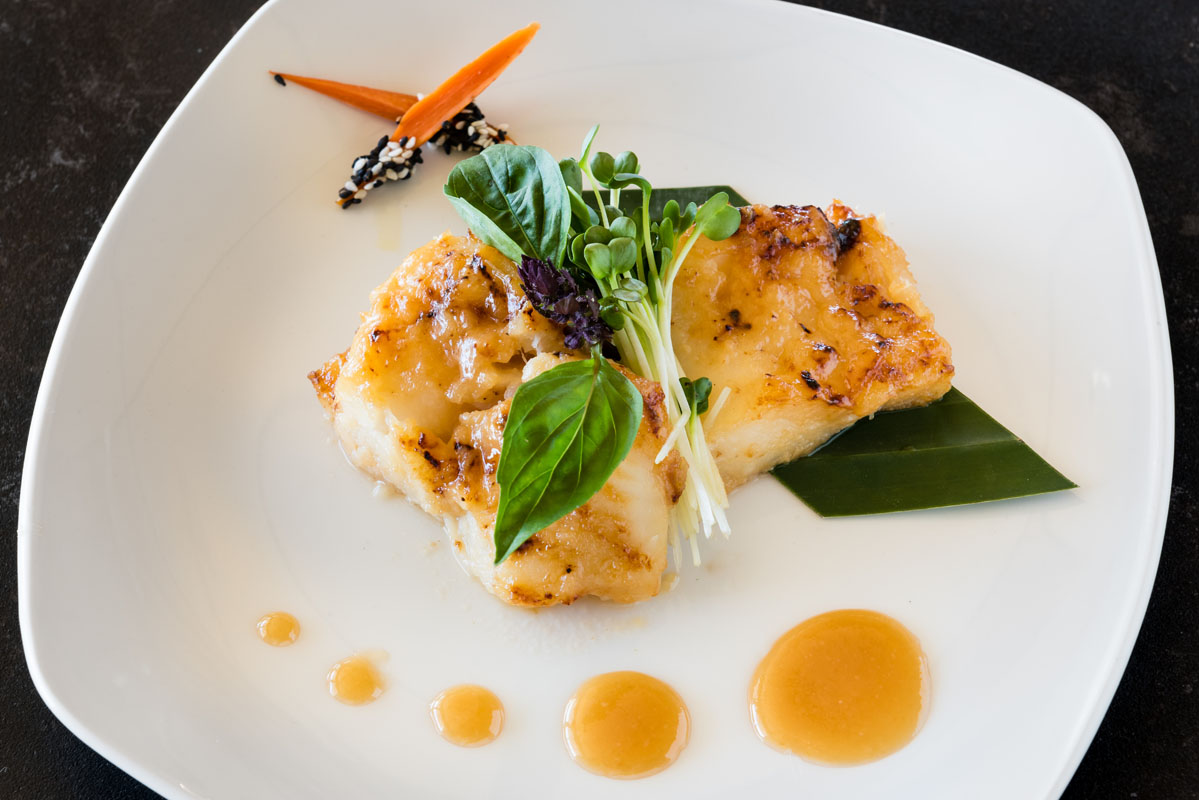 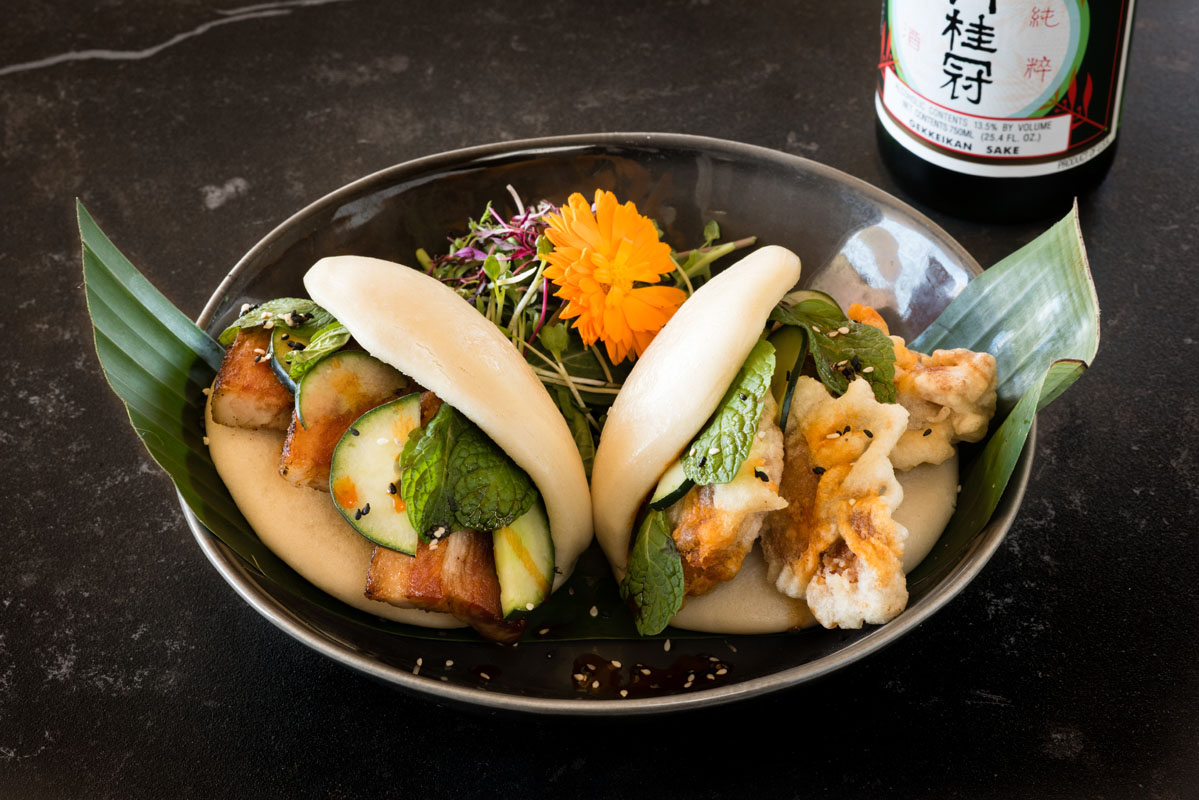 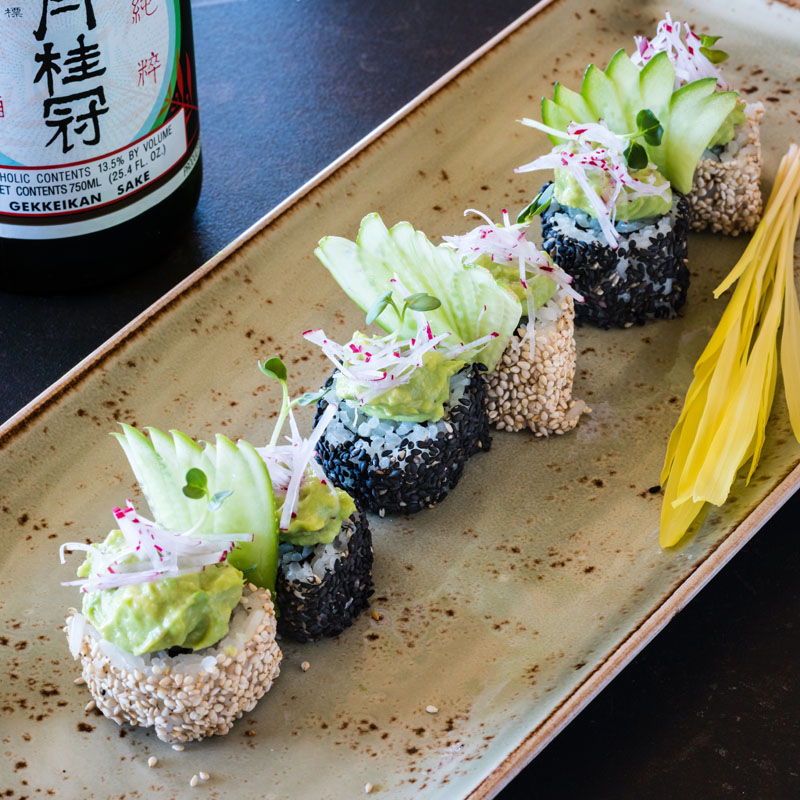 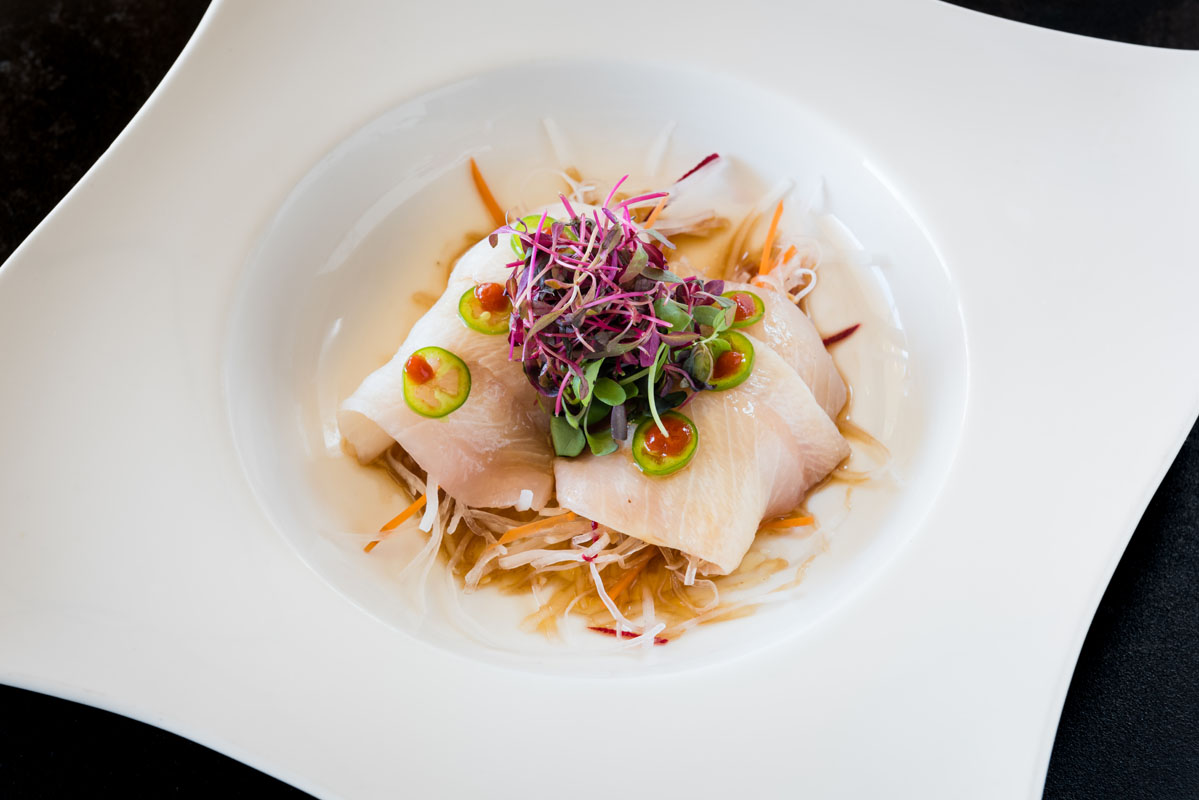 All photos by Ben Gibson.

It starts with a gong — yes, an actual gong.

Past that, the dark, sexy space is illuminated by a custom ironwork bar boasting lit sake bottles — the largest selection in Texas, you’ll surely be told. Then there’s the chic dining room, which certainly looks the part of a trendy new go-to Dallas restaurant.

Yes, the design inside Musumé (pronounced kind of like resume with the accent on the middle syllable) — open as of last night, and serving both lunch and dinner on Flora Street in the Dallas Arts District — is elegant and thoughtful, with hand-carved and hand-painted touches all over the place: Each of the cement columns throughout the space has been painted by a renowned body painter; on one wall, there’s a large cherry blossom tree with a three-dimensional trunk hand-carved out of wood.

That it passes the eye test is no surprise. Musumé is the culmination of a lot of experience, design work and artistry — and that’s before you even get to the food. A new concept from the minds of Sean Clavir and Josh Babb — a tandem whose resumes include Kenichi, the spot that spent a decade churning out stylish, über-sexy sushi and Japanese dishes in Victory Park — Musumé’s menu was crafted by Ken Lumpkin, a sushi master with a culinary background that spans French, New Orleans and Japanese cuisines, the last of which can be traced to his upbringing in a Japanese household and his own recently shuttered Memphis spot, Umai. It’s a large menu, too. Beyong the 125 sake varieties, there are plenty appetizers, mains, sides and sushi dishes to choose from.

Let’s start with cocktail offerings, which feature several sake-based concoctions, as well as drinks where other spirits play the main role. The sweet and herbal Musumé Mojitsweet ($12) featuring Momo Kawa Saki is a particular delight.

From there, petite and shareable starter plates are varied and delicious enough to make a meal of themselves, whether you start with spicy edamame ($8), the delicious-yet-vegan-friendly chickpea panisse ($14) or more expensive options like the lobster dynamite ($27) or the ishiyaki hot rock ($12-$35).

Moving into entrees and sides, you’ll find a number of seafood and steak options, as well as vegetable-based dishes with heavy Japanese bents. The forbidden halibut ($17) comes perfectly cooked atop baby bok choy and black rice steeped in uni. The wok-charred okra ($8) is especially enticing; slightly spicy, with bonito that dances in the steam atop each saucy morsel.

Sushi rolls are creative and inclusive, with vegan and vegetarian options aplenty. The two gorgeous and inventive vegetarian specialty rolls on the menu — the Super Fly and the Mint Garden specialty rolls – are just the tip of this iceberg, as the seafood sushi, sashimi and specialty options are studded with mouthwatering options, which range from the house spicy tuna ($9) to the Texas Blossom ($22), which includes tempura shrimp and wagyu beef.

That Musumé mean daughter in English is no accident. Eating here, you definitely might feel transported back to the days of Kenichi’s dominance, which lasted a full decade before that popular spot shuttered last year. But you’ll also notice some changes — namely in the fact that this spot is a little more modern and a bit more understated.

Sure, it still has its over-the-top parts — hence that gong by the entrance — but, for the most part, this is sexy Japanese concept is befitting of the new generation it’s aiming to serve.