Things To Do In Dallas On Thursday, March 16. 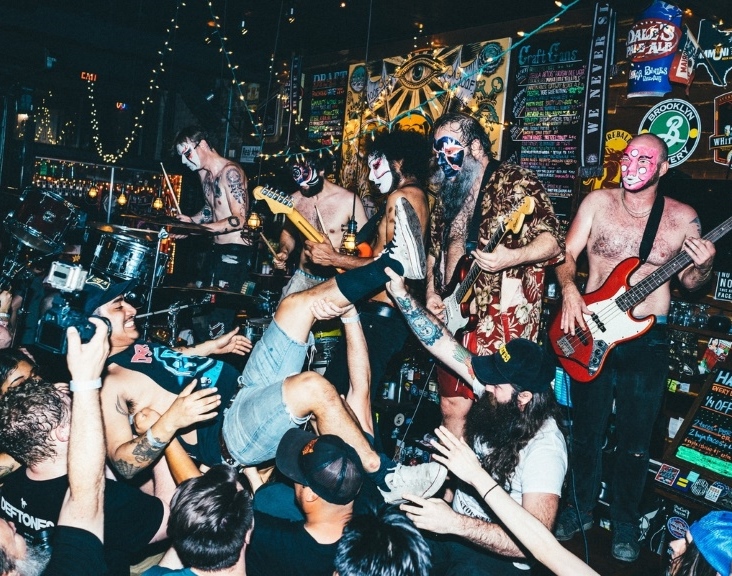 Good news, Google has finally killed CAPTCHA, aka that thing where you have to type two squiggly, indecipherable words into a box to prove you’re not a robot. Turns out, robots were starting to get better at reading them than humans.

But no robot is good enough yet to tell you what to do this fine evening. The living breathing persons over at CT are still down to do that for you by hand, though.

Daikaiju at Three Links
The last few times mysterious, masked Alabama surf rockers Daikaiju have played Links, they’ve literally set the building on fire. Not sure how they’re going to top that. A bigger fire? Drug Animal, The Eggshells and Toranavox open.

Memorial Benefit in Memory of Matt Moseman of Edgewater at Trees
It’s by no surprise that 2016 saw by far the most celebrity deaths of any year in the past two decades — according to Wikipedia, anyway. But a name that didn’t show up on all those year-end legends-who-passed recaps was Matthew Moseman. The frontman of Edgewater, a prominent Dallas hard rock act in the ‘90s and early ‘00s passed away due to heart troubles on December 27 in McKinney. He was 43. While Moseman was best known to fans for his ability to “sing with his eyes,” his band is best remembered for touring with Creed offshoot Alter Bridge back in the day, and having its biggest single, “Eyes Wired Shut,” on The Punisher soundtrack. This benefit concert, featuring his old band fronted by an assortment of guest vocalists, will help raise money for his family.

St. Paddy’s Jameson Tasting Dinner at Independent Bar & Kitchen
An Irish whiskey tasting to kick off the weekend everybody pretends to be Irish. Unlike a lot of the other amateur hour, puking-on-the-patio St. Paddy’s (not Patty’s) events, this is a classier, four-course sit-down dinner. Reserve your $50 spot at the table asap, though, because seats are limited.

Sarah Tiana at Hyena’s Plano (Free)
She may live in L.A. now, where her credits include ghostwriting a bunch of the burns better known celebs used on Rob Lowe during his Comedy Central roast, but Tiana’s a southern girl through and through. She’s still got that thick Southern accent, which helped her fit in during Brett Butler’s Southern Belles of Comedy tour, a kind of female spin on the Blue Collar thing.

The Black Lillies at The Live Oak
Likening the Knoxville, Tennessee outfit to a male-fronted Alison Krauss & Union Station, Rolling Stone called The Black Lillies one of its bands to watch in 2014. Some would say they’re still worth knowing – unlike, perhaps, the not-long-for-this-world venue they’ll be performing in for the last time.

First-Ever International Food and Wine Fest at Dallas Arboretum
The Arboretum’s first every culinary adventure brings hundreds of bites, wines and brews courtesy of dozens of the Metroplex’s top chefs, set among a backdrop of 500,000 blooming flowers.

Intro to Urban Cycling at J Erik Jonsson Central Library
Bike riders and automobile drivers don’t always see eye to eye on the rules of the road, making easing into cycling an intimidating undertaking. But the more wisdom you gain, from sessions like the one at the library tonight, the safer and less stressful it’ll be.

The Boondock Saints at Alamo Drafthouse (Richardson)
The cult classic starts with a justified self-defense killing of some Russian mobsters during a St. Paddy’s Day party, and ends with tons of blood spilled at the hands of some vigilante Irish twins. A real uplifting picture highlighting the reason for the season.

All-Con at Crowne Plaza North Dallas
All-Con is a convention named for its goal of bringing in geeks and fandoms from all genres, from science-fiction to fantasy to anime and much more. There’s a lot going on for the four-day convention (350 separate events in all) including special guests, gaming tournaments, cosplaying, burlesque, workshops and performances. — Paul Wedding

Mario Alberto Gallegos Presents: La New Onda “Forever and Evermore” at Margo Jones Theatre
Gallegos is the Dallas designer behind lifestyle brand La New Onda (Spanglish for “the new wave”) which is unveiling its newest line at this event.

Russ and Rob $tone at Gas Monkey Live
Atlanta rapper Russ revels in a few things — a wide swath of influences, the fact that he produces and writes all his own songs, and that he is decidedly not an industry plant. In other words, he’s no Post Malone.