These New Dallas Cowboys Photo Booths Are Rad As Hell. 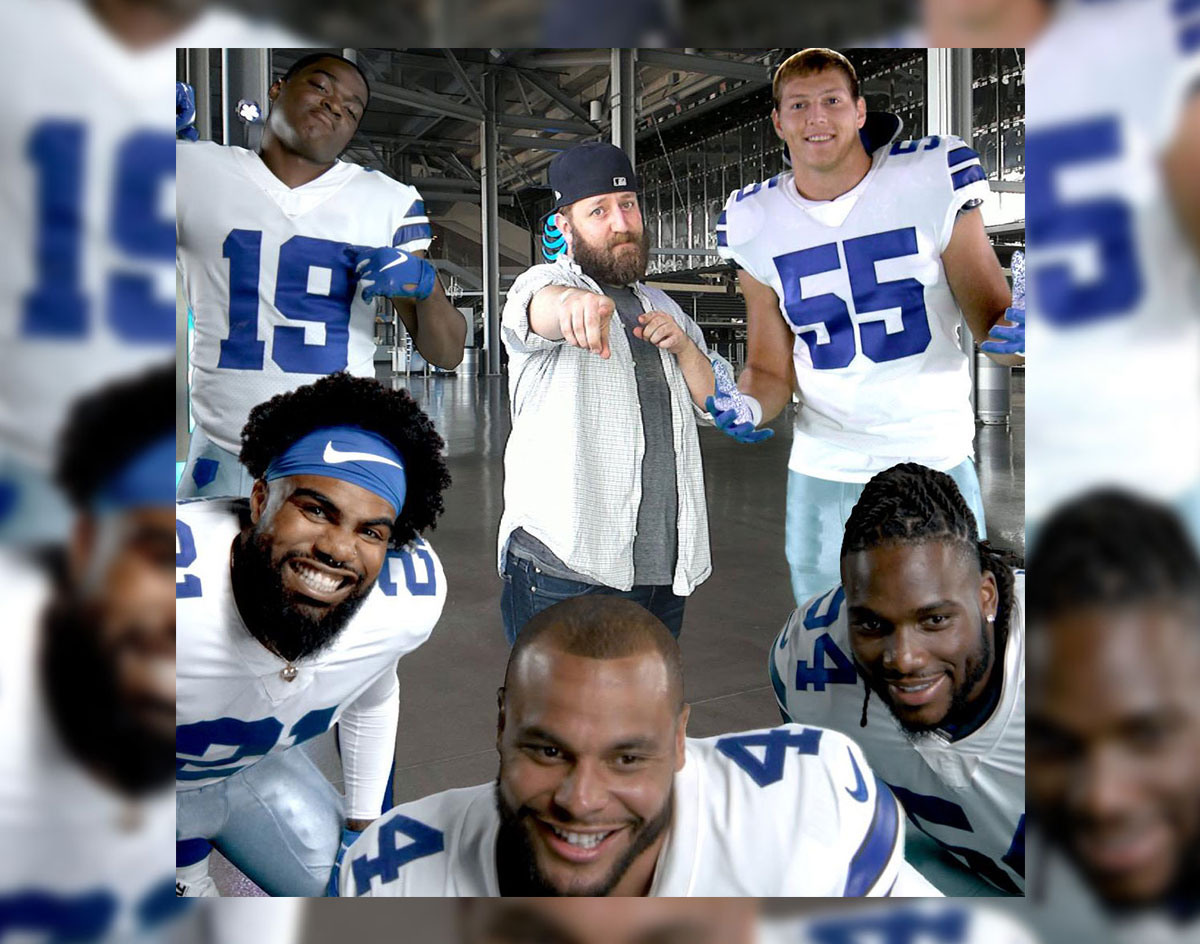 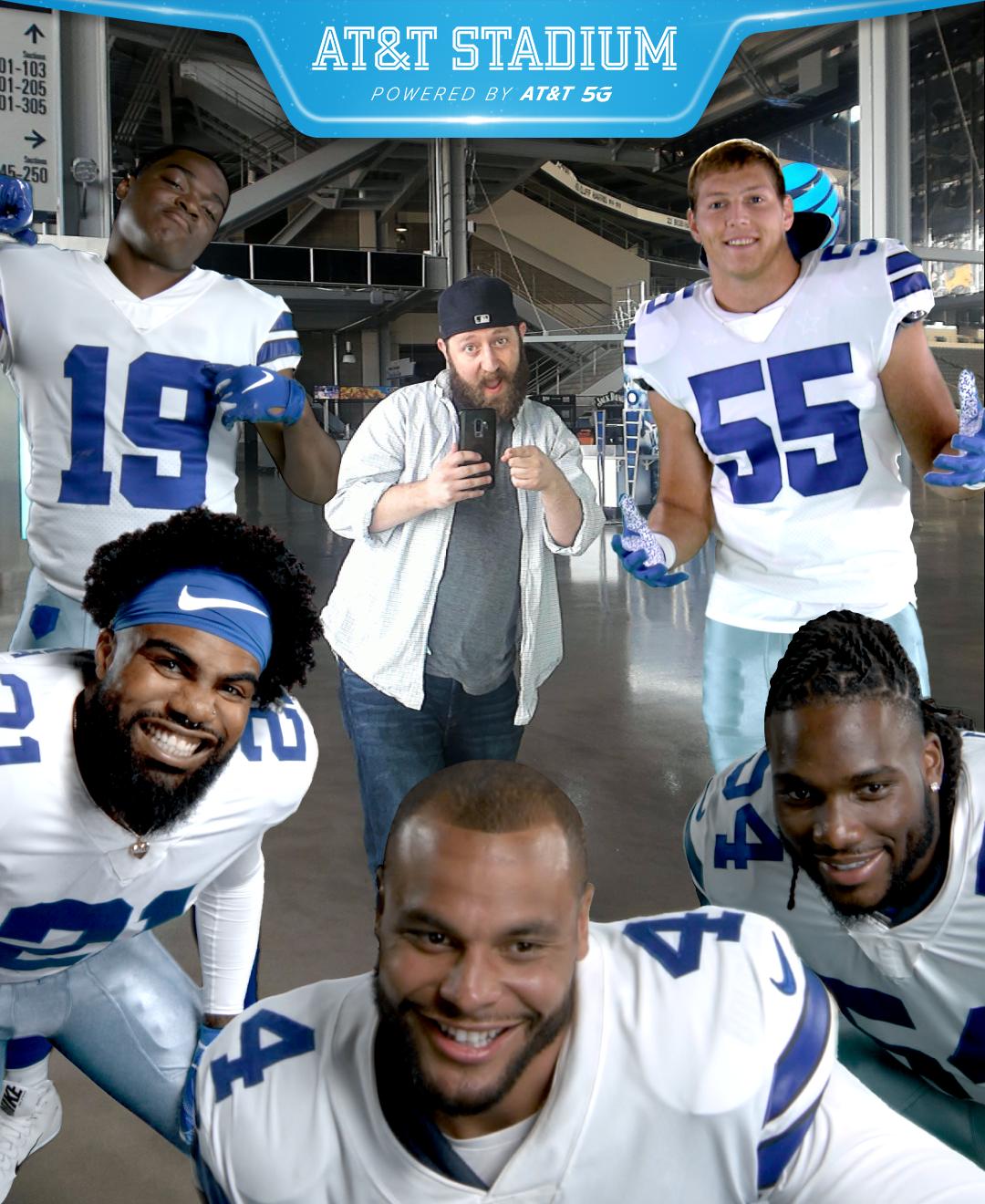 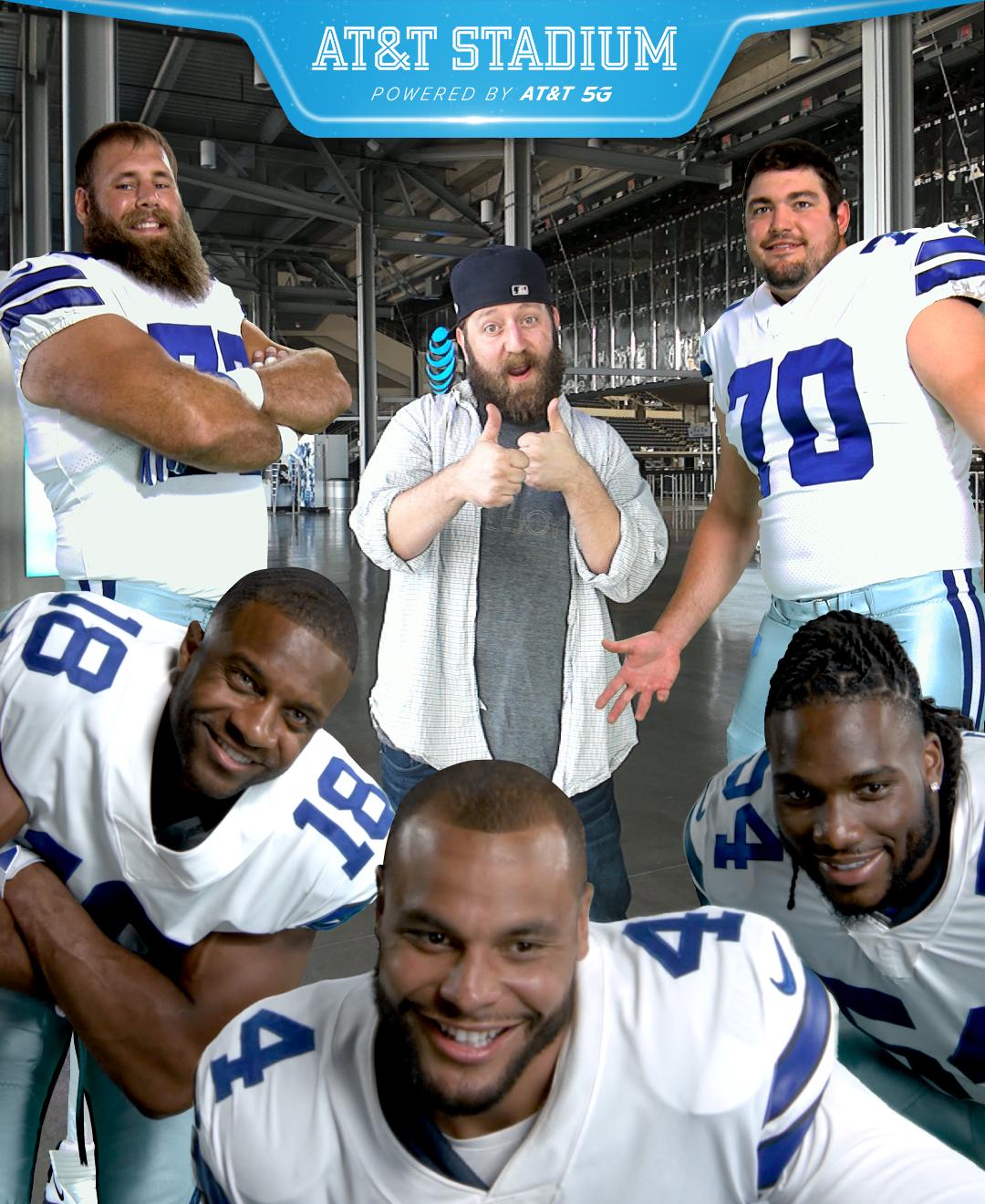 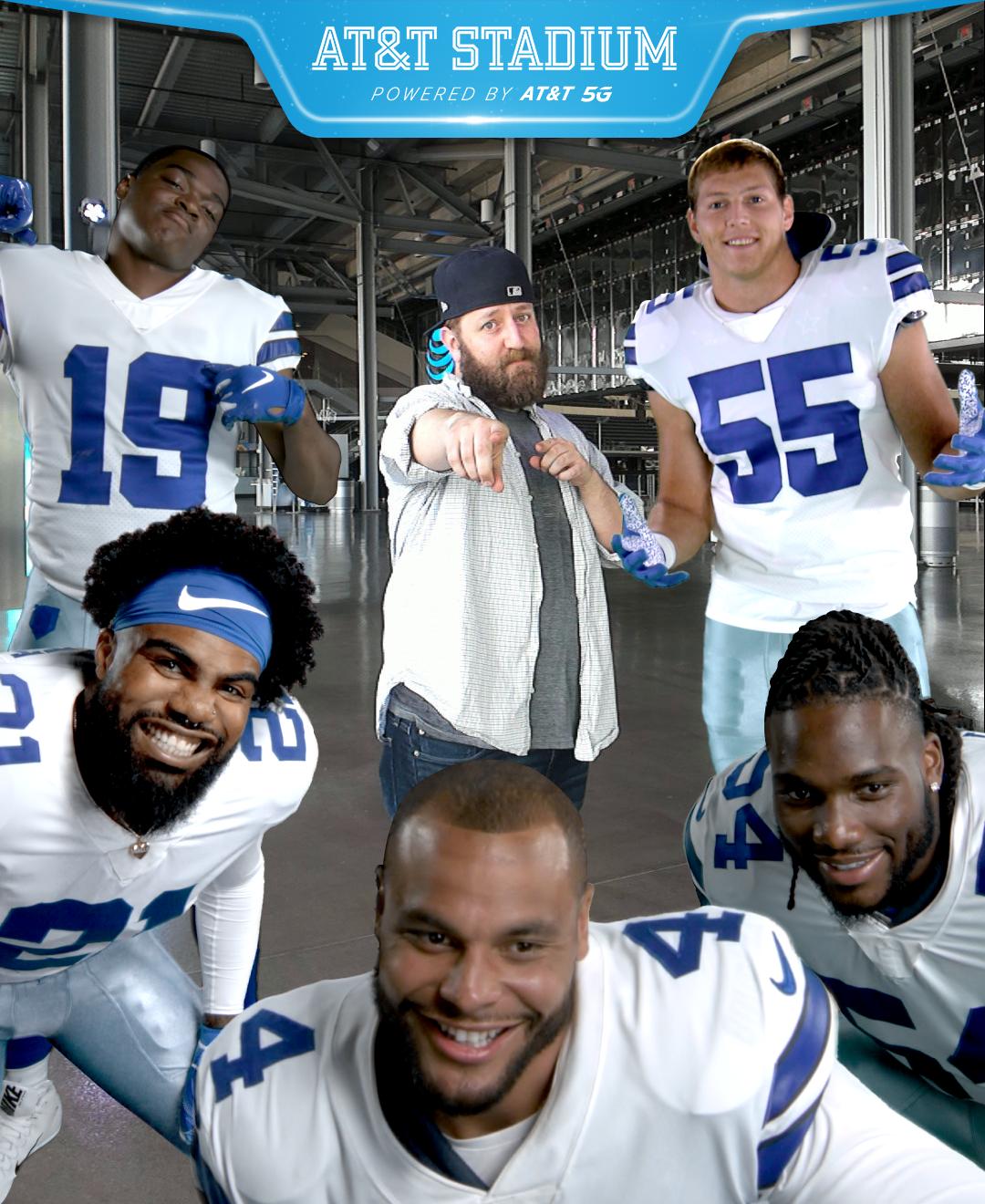 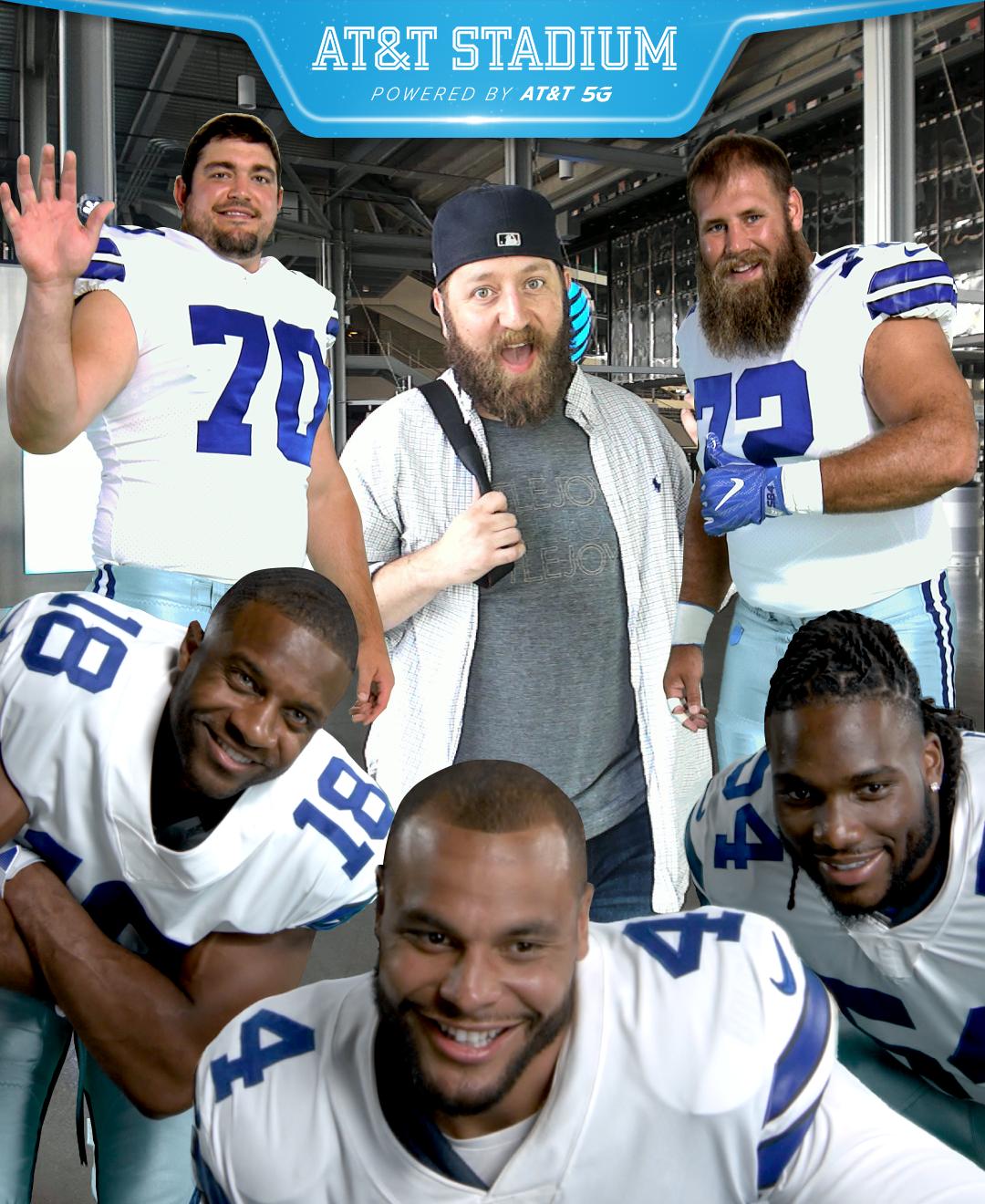 At this point, it’s clear that people will go to desperate lengths just to make themselves look cool on social media. It’s why our cities have become damn near overrun with “Instagram experiences” in recent years.

But, cool as it might be to pose for a photo inside of a work of art that’s been created just for that purpose, there’s still something extra special about your feed boasting a pic with you posing alongside a bona fide celebrity, isn’t there? Like, you just can’t fake that funk.

Or, wait: Can you? This is the question at the center of the newest fan experience at AT&T Stadium, the home of the Dallas Cowboys, and it’s precisely what makes it so cool.

During preseason NFL games hosted there earlier this year, AT&T debuted a batch of eight interactive screens that it had installed into the east plaza of the Arlington football stadium’s concourse near Entry B. Combining real-time photo booth technology with augmented reality video overlays, these free-to-use screens allow fans to pose for realistic photos with five Dallas Cowboys players of their choosing from a pool of eight player options. It’s an objectively rad idea, which capably explains how a video taken of fans interacting with this activation at the Cowboys’ regular season home opener against the New York Giants quickly went viral, earning more than 12 million views on Twitter.

Last week, in the wake of that video’s rapid spread, the Cowboys’ publicity team invited members of the media out to the stadium to test-drive the feature in person. We took them up on that offer. Here’s a first-person clip showing off exactly what the experience is like:

The process begins with videos of players waving would-be passersby over to the screen to interact with it.

As the user makes each of their five selections, the players they pick line up on the right side of the screen. Once five players have been chosen, the user clicks “submit” and is instructed to start posing. At that point, videos of the players walking onto the screen around the user begin and the user is given a handful of seconds to pose around them by directing their attention at a camera on the right side of the set-up. Once ready, the screen goes white to provide flood lighting for the image, which is then promptly snapped. The players then walk off the screen, and the user is shown the image.

The final step finds the user accepting a user agreement and inputting either their cell phone number or email address in exchange for a copy of the image, which can be downloaded or shared to social media.

The whole process takes about 60 seconds to complete.

The positions of the players are supposed to change based on the orders and combinations in which they are selected. As the photo set at the top of this post shows, we didn’t have much luck getting Prescott to move around. But, according to representatives with AT&T, each player available in the booth boasts indeed three different poses and positions, which they each individually took 30 minutes to an hour to film in front of a green screen during the offseason.

This experience, which utilizes augmented reality as well as the stadium’s 5G network, is the latest AT&T-installed addition to the stadium that bears the Dallas-based telecom giant‘s name. It joins a large video board the company installed above the football field’s east endzone in 2017, and its replaces “living photograph” player installations that previously sat where the AR photo booths are now.

Plans for these photo booths began in December 2018 when AT&T committed to installing its 5G network into the stadium and started looking for ways to highlight the still-being-deployed nationwide system.

Additional activations that combine AR technology and 5G capabilities will be rolled out throughout the stadium as the 2019 NFL season stretches on. Those include three AR functionalities that will be exclusive to 5G-enabled Samsung mobile devices — a game users can play on their screens in which they control robots who appear on the field in real time, a stretch of concourse in which users can interact with videos of players who appear on their phone screens (think Pokémon GO) and another video-based experience exclusive to the plaza outside of which users can look through their phones to see (and capture) videos of players “on top of the structure of the stadium, crashing through boards — kind of like Godzilla,” according to Christine Cage, lead marketing manager with sponsorships and experiential marketing at AT&T.

It’s possible that even more experiences could be added to the stadium this year. Meanwhile, notes AT&T director of experiential marketing Bill Moseley, it’s more than likely that similar installations — perhaps with TV shows or movie casts? —  will be added to the still-being-built, $100 million AT&T Discovery Center in Downtown Dallas that’s set to debut in part this winter.