The Only Pro Sports Team In Dallas To Make Back-To-Back Playoffs. 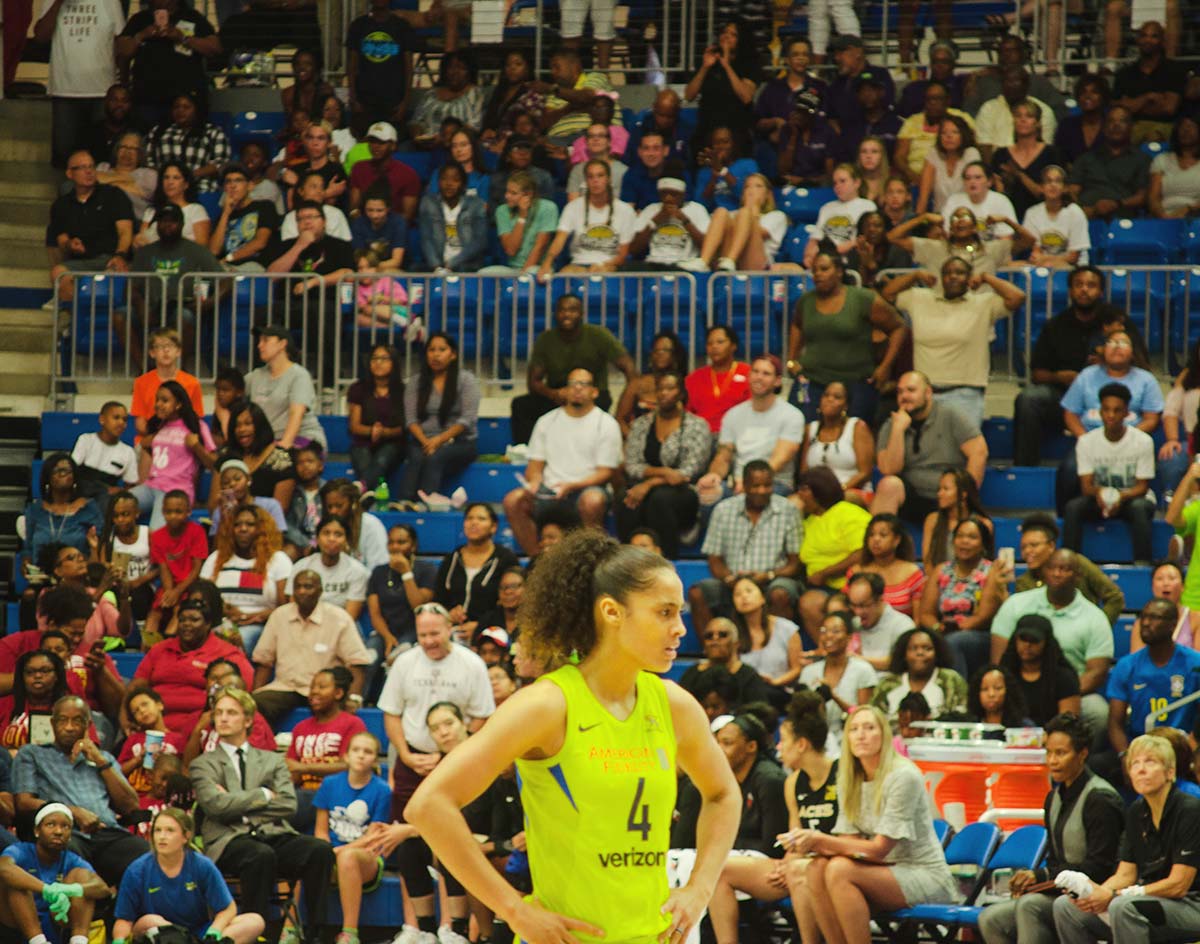 How The Dallas Wings Ended A Nine-Game Losing Streak With A Crucial Win Over The Las Vegas Aces To Clinch A Second Straight Trip To The Playoffs.

The Dallas Wings found themselves in a pretty rough spot on Friday.

After starting the season on absolute fire and earning attention for all the right reasons, the team suddenly found itself in danger of missing the WNBA playoffs following a run of nine-straight losses that found the team dramatically parting ways with its longtime head coach, Fred Williams.

In no uncertain terms, its home match-up against the Las Vegas Aces — dubbed “The Battle of 14-18”– placed the Wings in a must-win situation.

Fortunately, the team would emerge from that game victorious, registering a 107-102 win and, in the process, clinching a spot in the 2018 WNBA Playoffs. Something to keep in mind when considering how significant an achievement that is: The Wings are now the only pro sports franchise in Dallas that can currently claim making back-to-back postseasons in their league.

Even following a 84-68 loss to the Seattle Storm on Saturday, the Wings’ Friday night win secured the team a match-up against the Phoenix Mercury in the playoffs’ first round, which kick off tonight in Arizona.

Before then, though, let’s take an inside look back at the emotional Friday night game that got the team to this point. 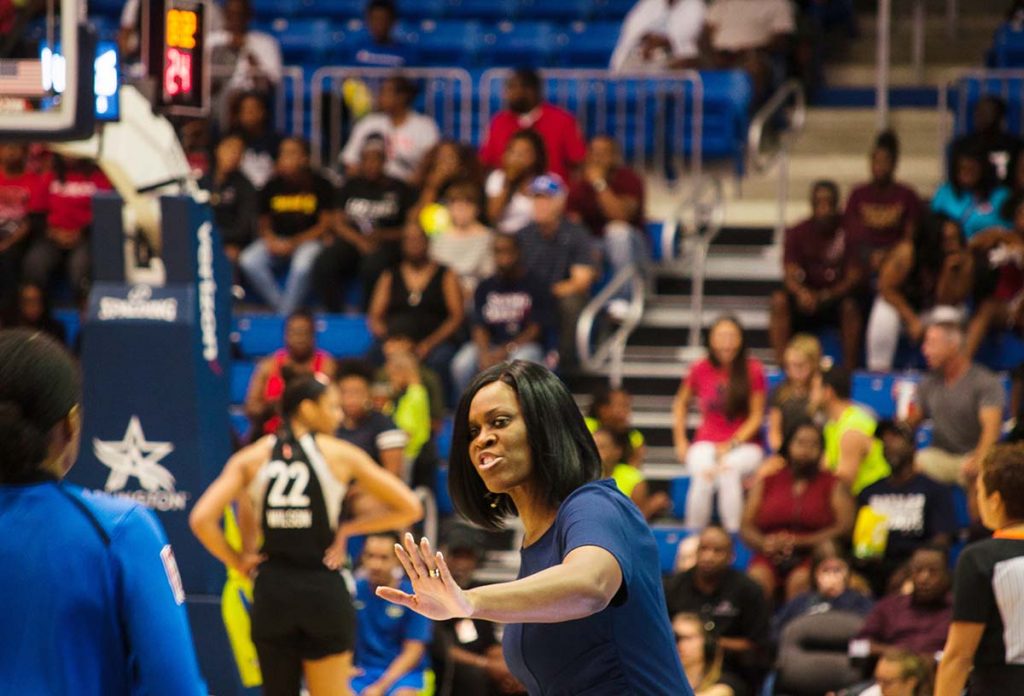 Taj McWilliams-Franklin was named the interim head coach on August 12 after the Wings relieved Fred Williams of his duties. Williams was involved in an “altercation” with team CEO and President Greg Bibb after a loss to the Washington Mystics — the team’s eighth straight loss in a run of nine consecutive defeats. 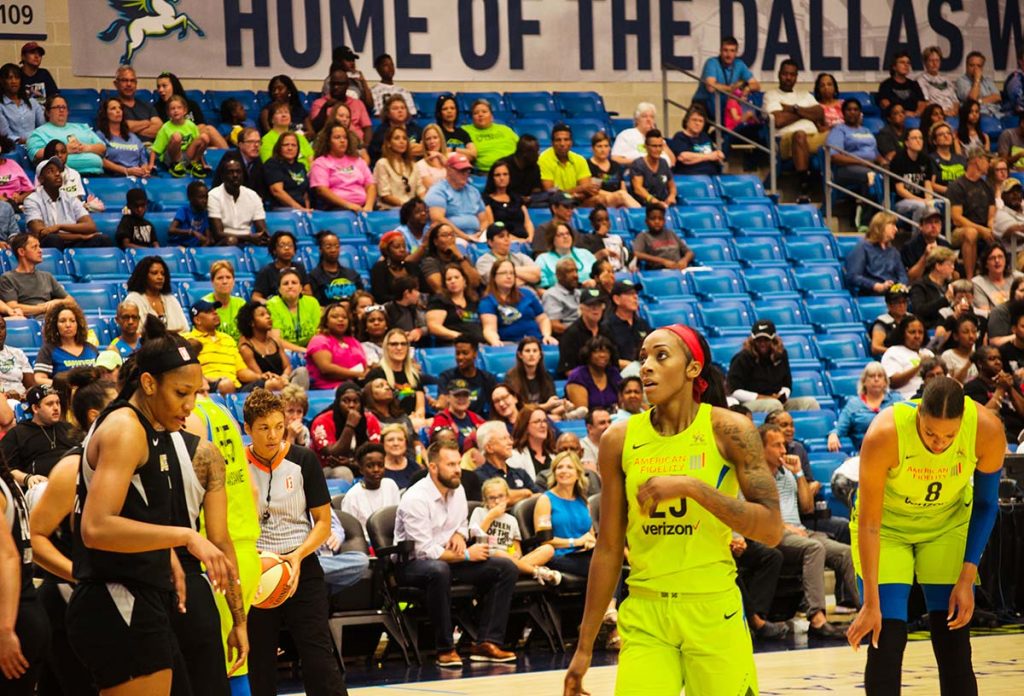 Glory Johnson (25) has been one of the Wing’s most important role players since the franchise moved from Tulsa, where it was known as the Shock. Johnson started the season missing five games due to a hamstring injury. 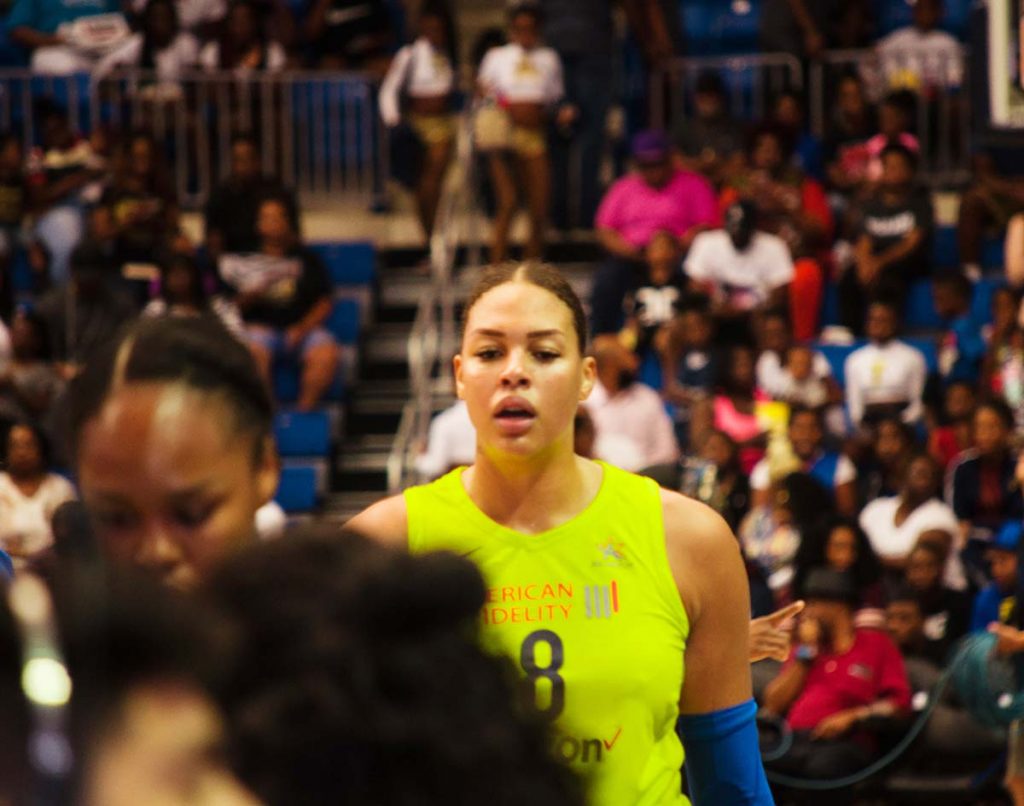 After a five-year absence from the WNBA, Wings center Liz Cambage returned to the league and became one of its biggest stars this year. In addition to setting a single-game scoring record earlier this year (53), she led the league in scoring, registering  23.4 points per game. She also came in second with a rebounding average of 9.8 boards per contest. 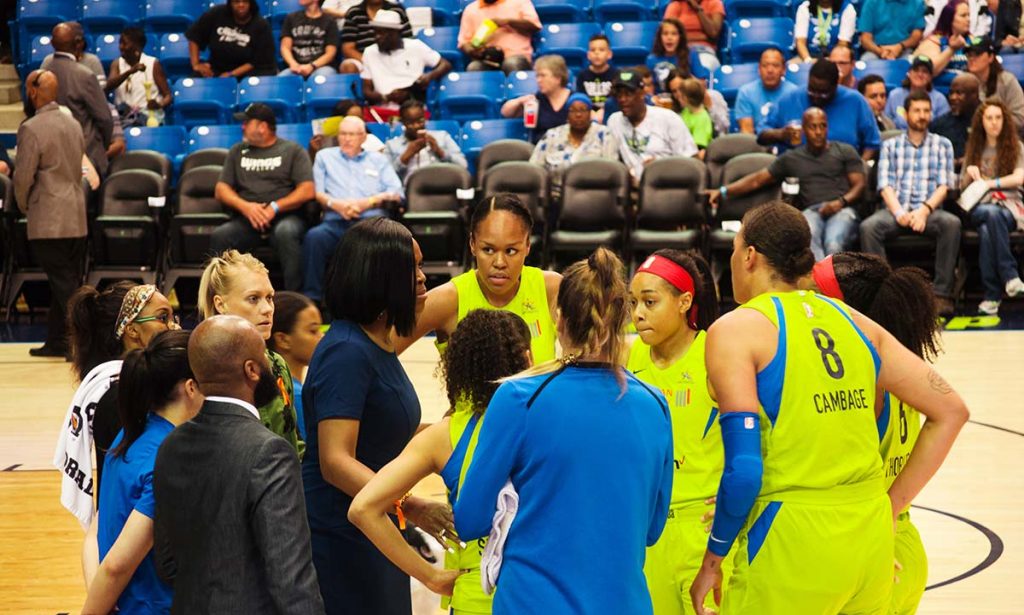 The Wings rallied Friday in what will go down as one of the guttiest performance in franchise and league history. The team played from behind most of the game, before eventually rallying for the win while relying heavily on its all-star players Skylar Diggins-Smith and Cambage. 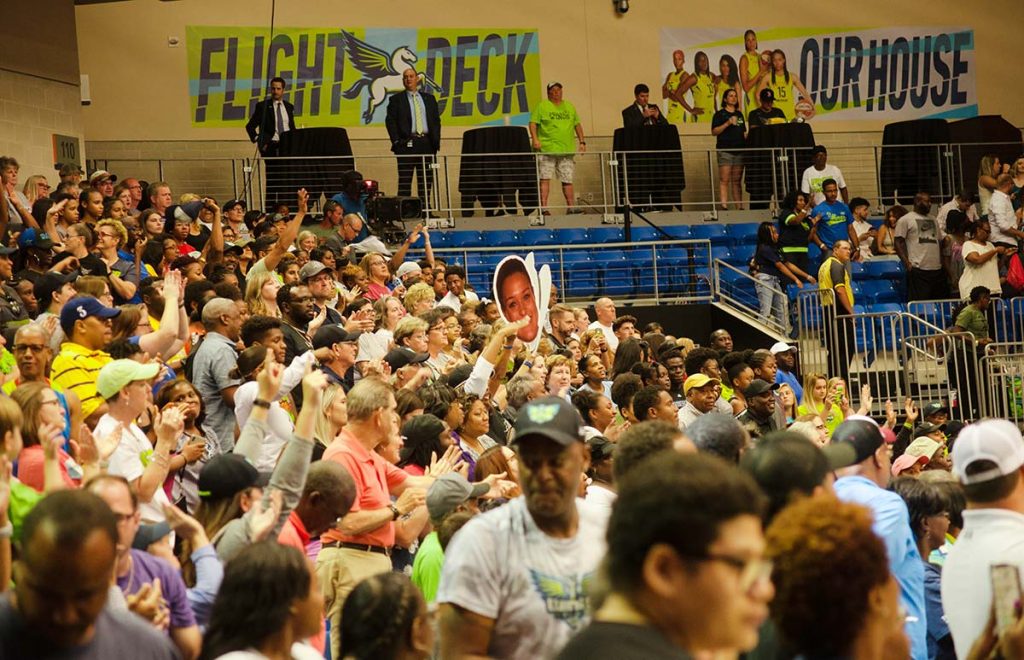 Fans packed the College Park Center in Arlington to a near-sellout attendance of 6,209 on Friday. It was the largest attendance the team drew to a home game this season. Last season, the Wings averaged a league-low 3,872 fans per home game. 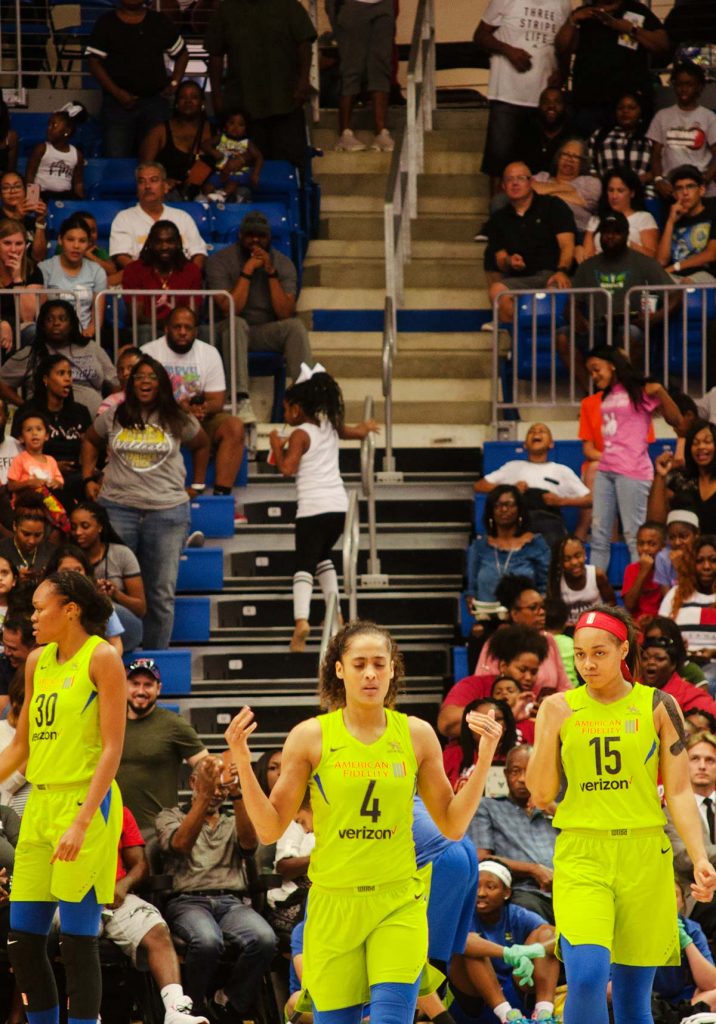 Throughout the 2018 season, fans had become increasingly more frustrated with former head coach Fred Williams. But, in recent interviews, Diggins-Smith has acknowledged that Williams remains supportive of the team, even going so far as to keep in touch with a few players and wish them luck in the playoffs. 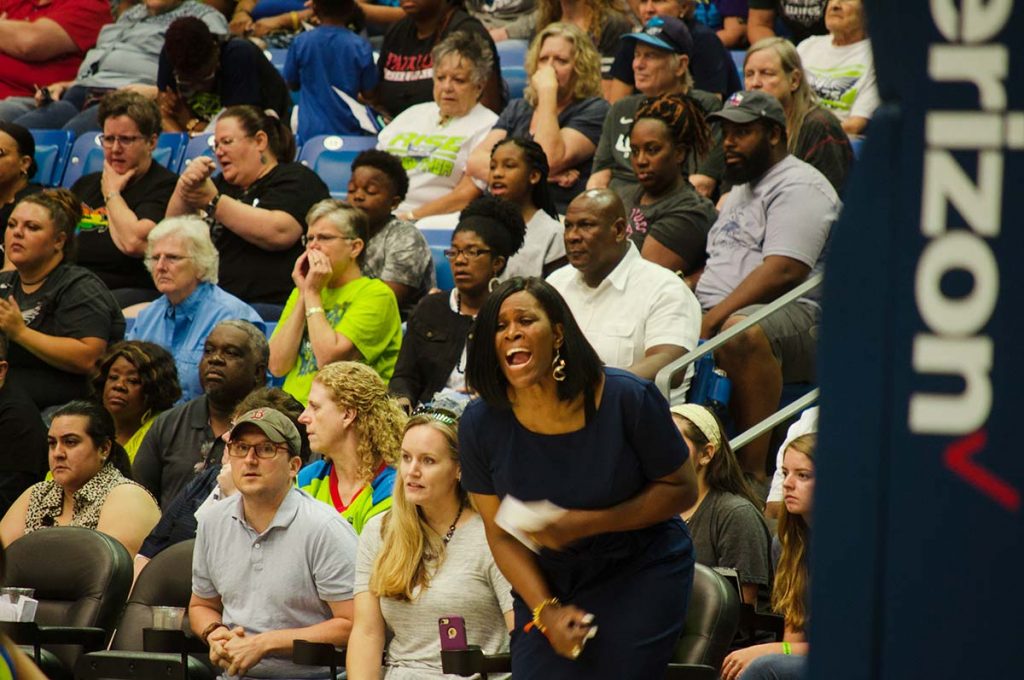 But the Wings might have something on their hands with interim head coach McWilliams-Franklin, who has championship experience as a player. She won a WNBA title with the Minnesota Lynx in 2011. 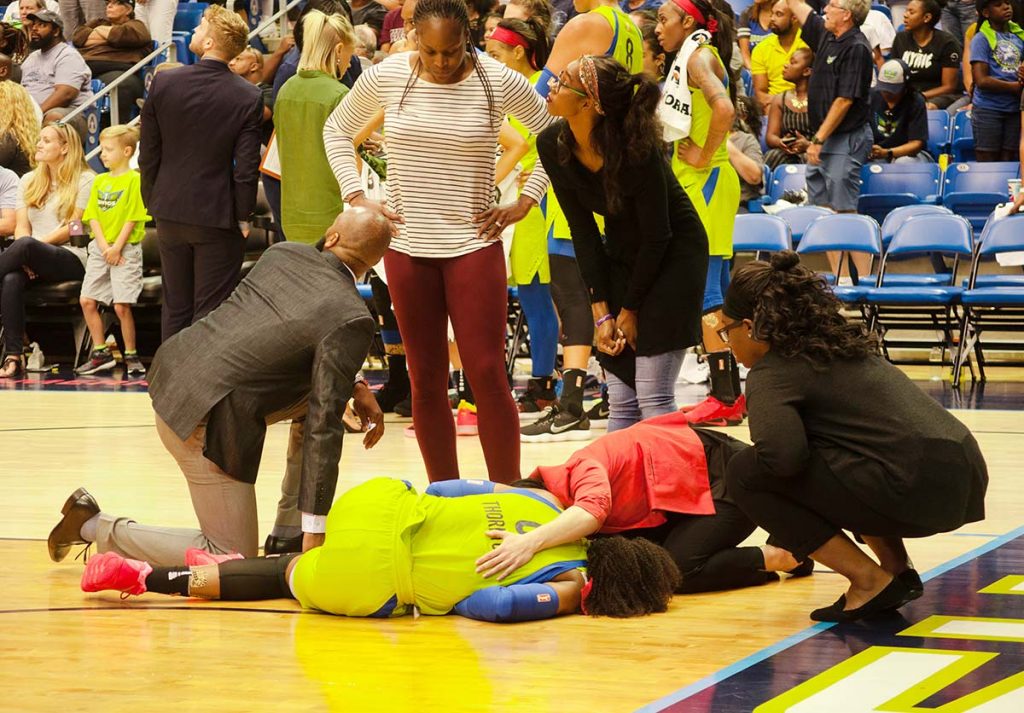 Wings swing player Kayla Thornton went down after being elbowed by Aces rookie sensation A’ja Wilson during Friday night’s action. That’s no surprise: The Wings have struggled all season long with injuries. Finally, the league granted the team a medical exemption Saturday, allowing them to sign Maggie Lucas on Sunday to a contract that will let her play out the reminder of the season as a member of the Wings. 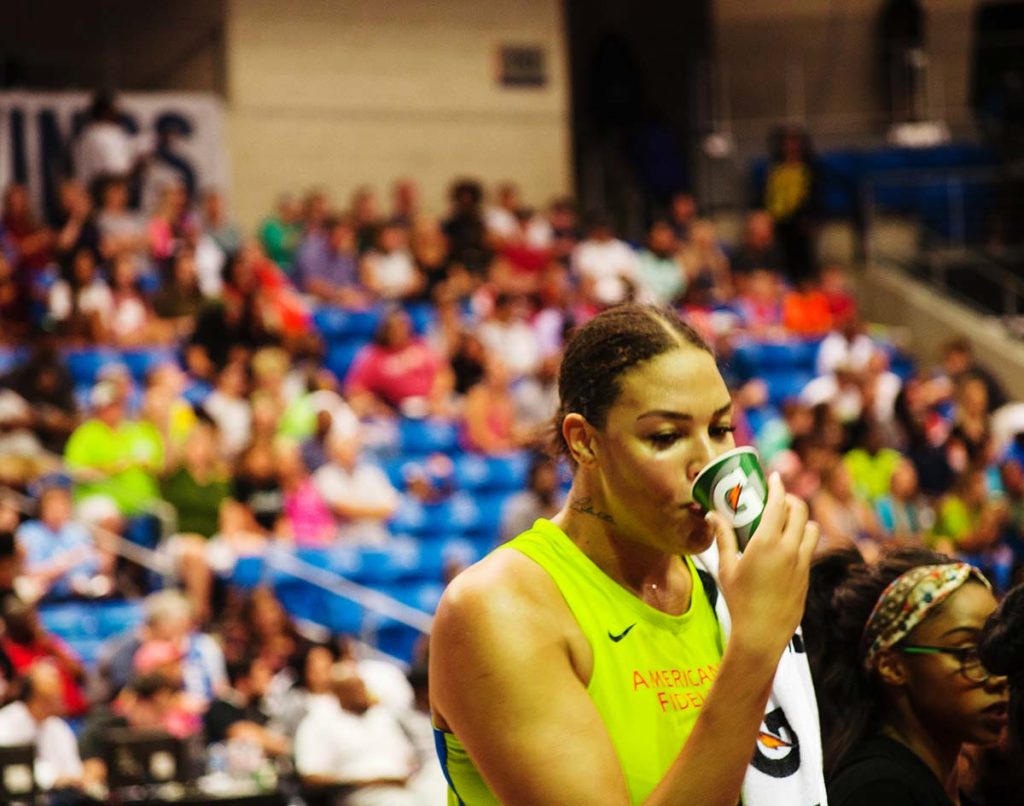 With the win on Friday, Cambage earned her first-ever WNBA playoff berth the day before her 27th birthday. When asked if that meant she’d be celebrating doubly after the game, Cambage simply said, “Girl! I’m getting some good sleep tonight.” 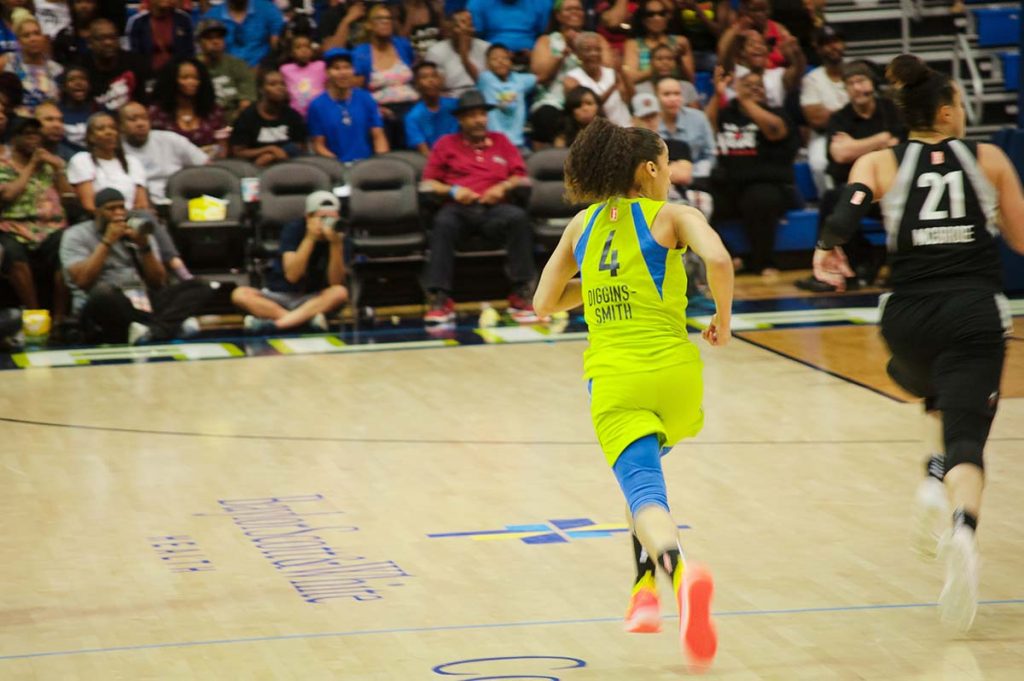 Cambage’s arrival to the Wings this year has not diminished Diggins-Smith’s star. The point guard has had one of the best seasons of her career, in large part due to Cambage’s presence, which opened up the floor for Diggins-Smith and allowed her to average 18.3 points, 6.3 assists and 3.4 rebounds per game this year. 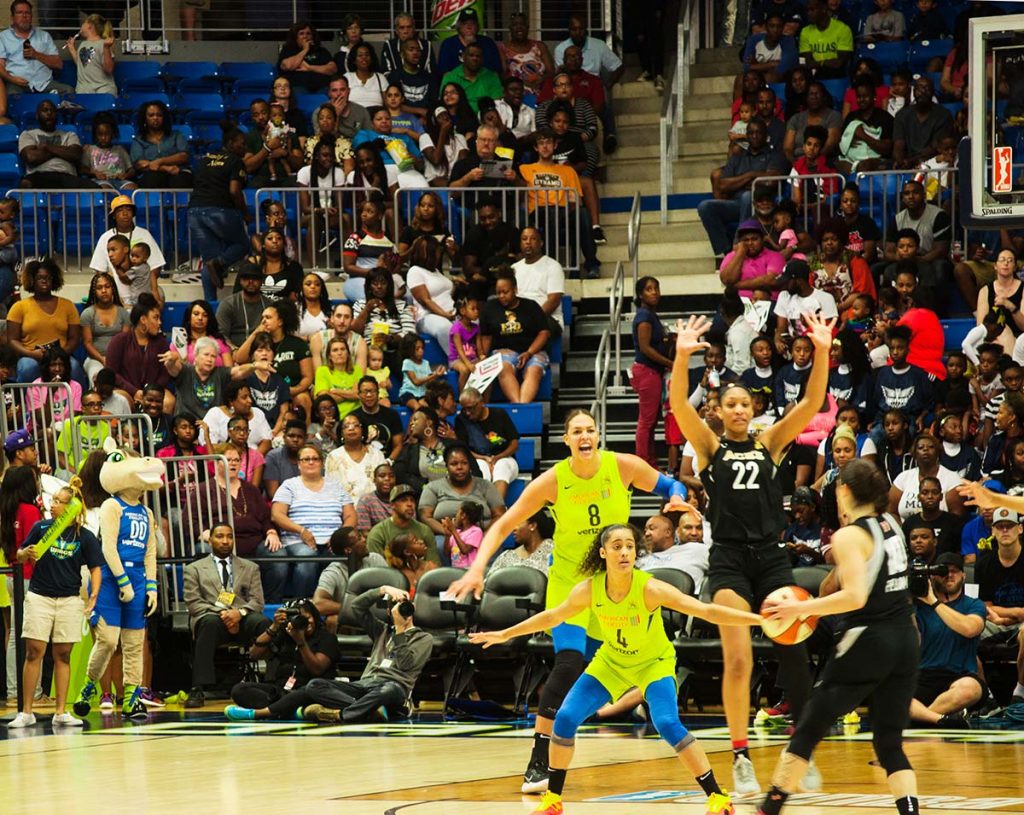 Although only the Wings will make this year’s playoffs between the two of them, Dallas and Vegas are still the two youngest teams in the league, and their futures look bright. Vegas, in particular, has made remarkable improvements in its first season since the franchise moved from San Antonio. 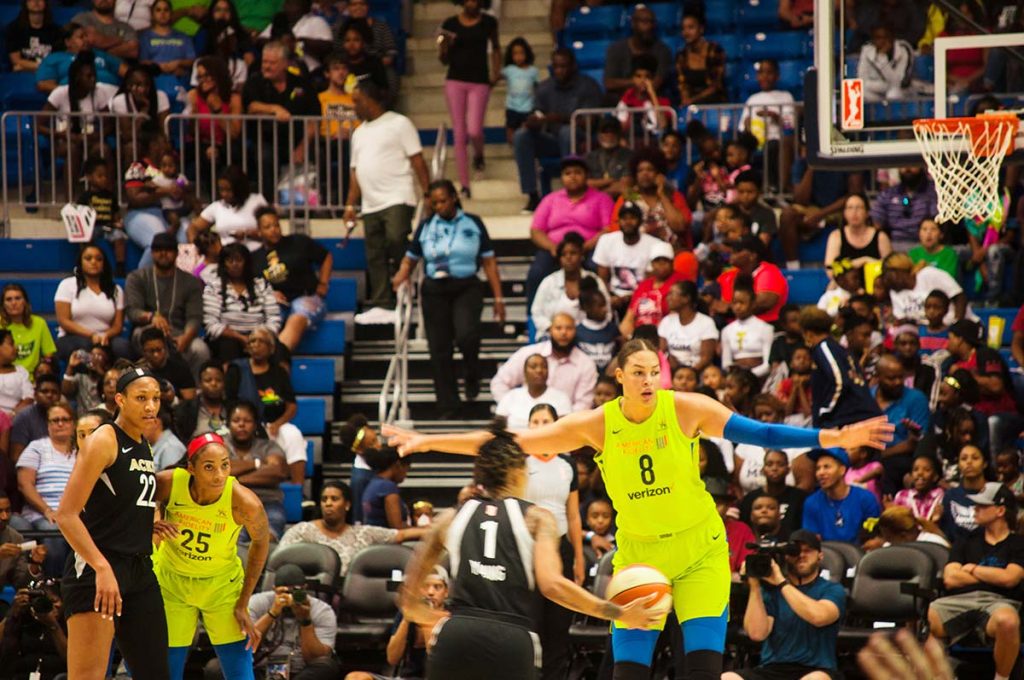 With Cambage in place, the Wings too should be a contender for years to come. But that’s no guarantee: Prior to Friday’s game, Cambage — long outspoken on this topic — announced that the league’s low wages could possibly prevent her from returning to the WNBA for future seasons. 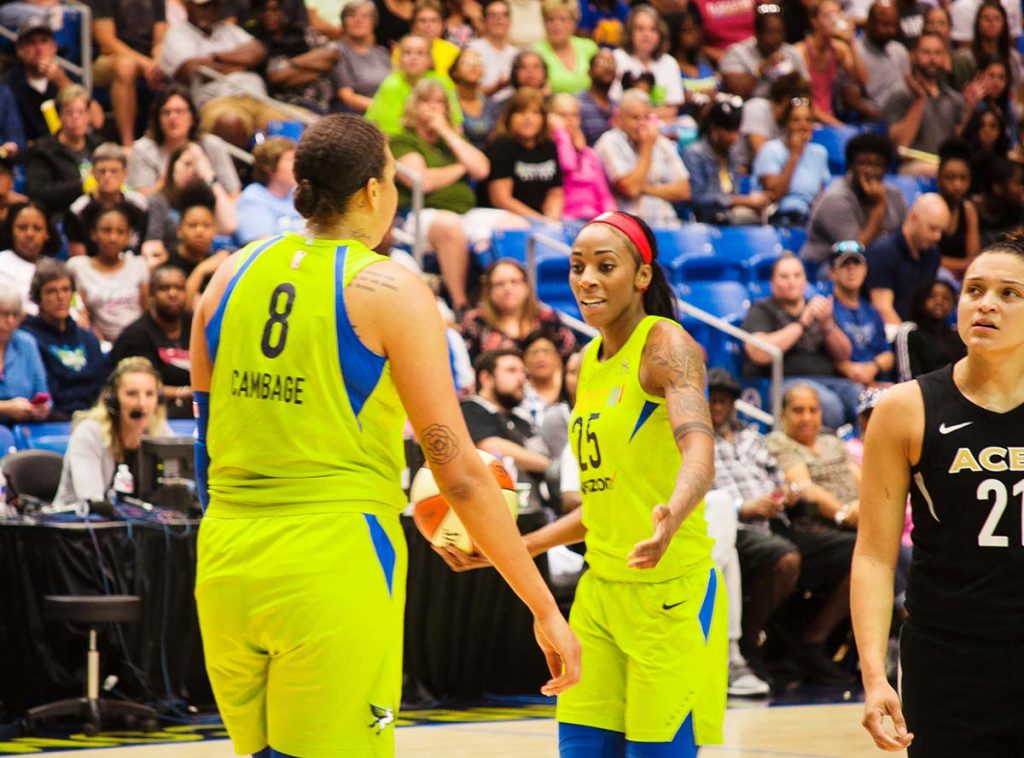 Cambage’s role in the Wings’ success this season cannot be overstated. Along with Johnson (25), she accounts for a large portion of the Wings rebounding, which ranks as the third-best total in the league. 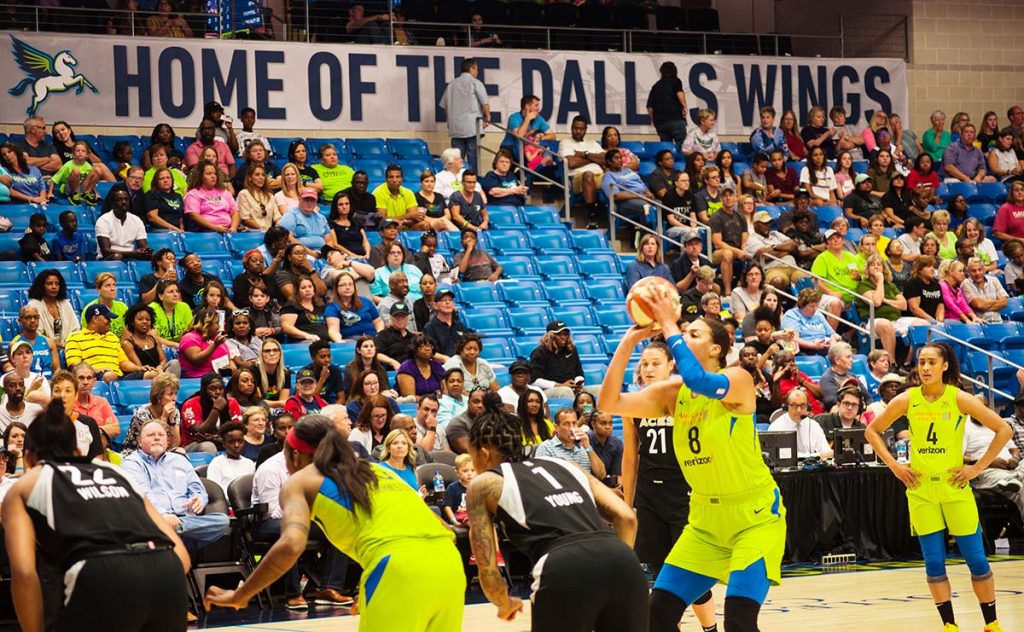 On Friday specifically, Liz Cambage finished the game with 43 points and 13 rebounds. It was also the 18th game of season in which she scored 20 or more points. She reached that milestone rather easily against the Aces too, having scored 23 points in the first half of the game alone. 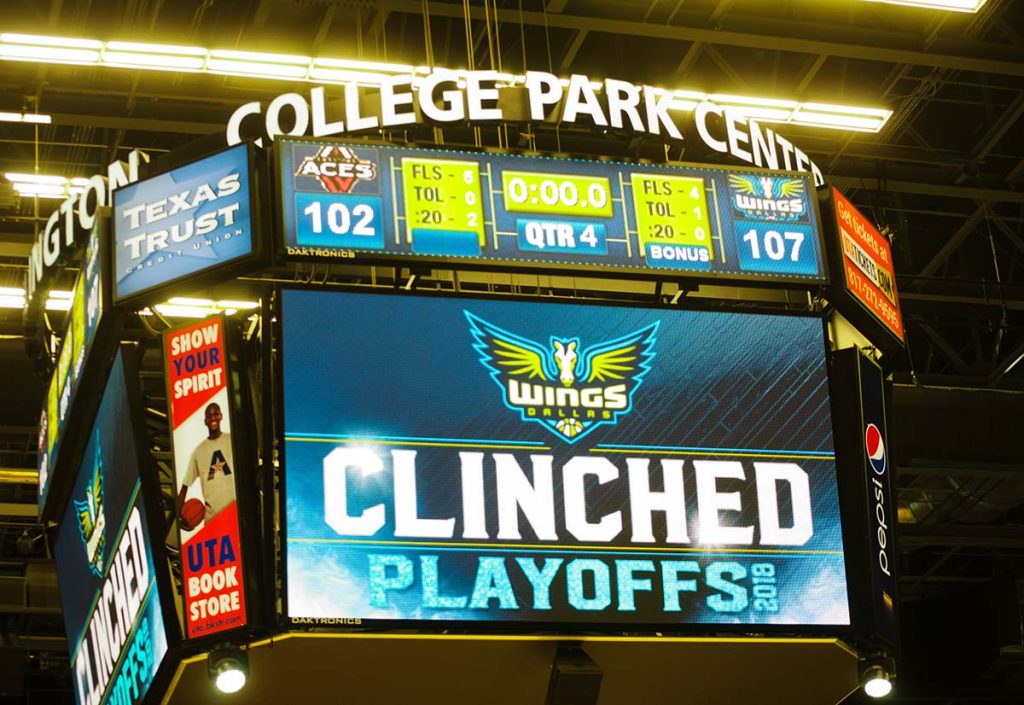 The Wings’ Friday night win over the Aces locked the team in as the last team to get into the 2018 WNBA playoffs. Following Saturday’s loss to the Storm, the Wings finished the regular season with a record of 15-18. The team’s playoff run kicks off on with a single-elimination game on the road against the Phoenix Mercury. The game will air live on Tuesday at 7:30 p.m (CST) on ESPN2.