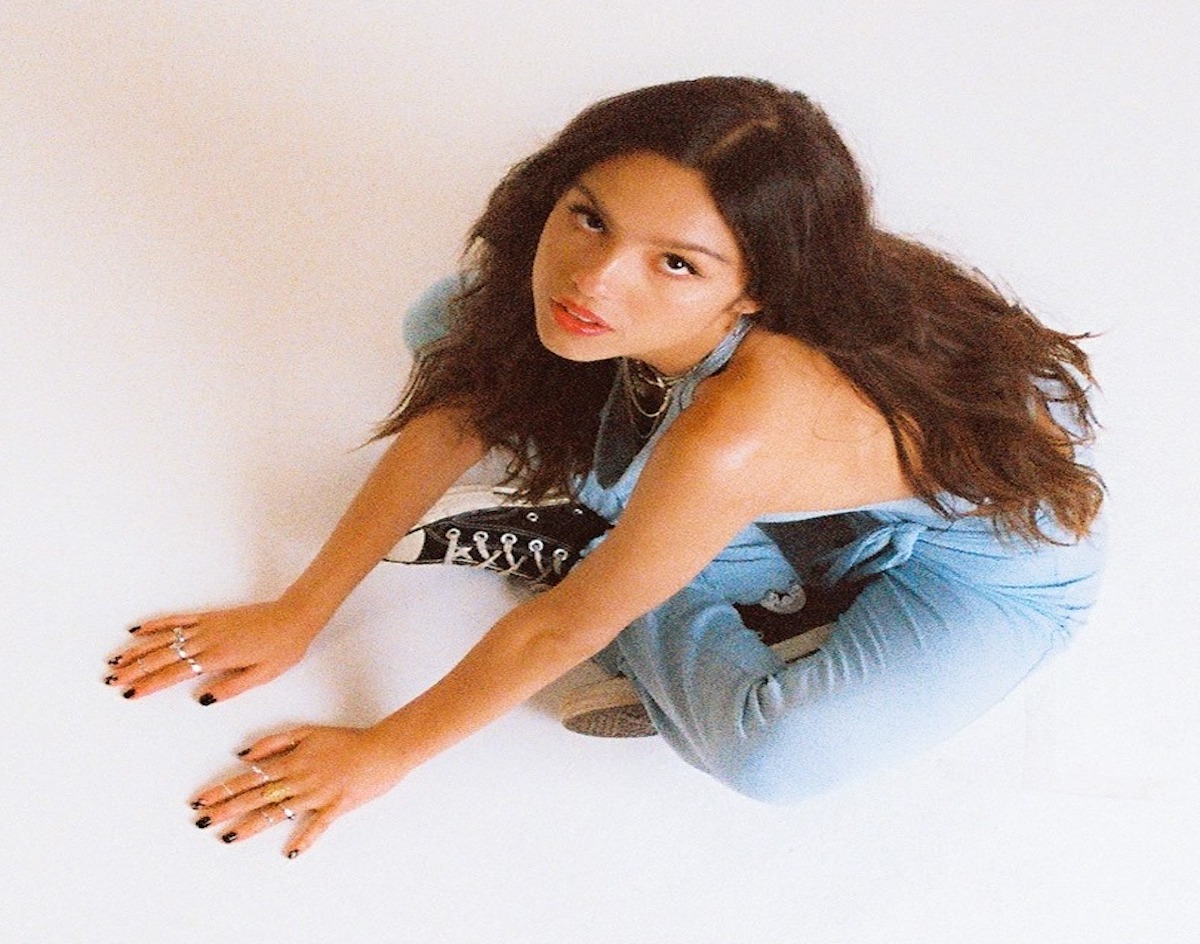 This Week In Dallas, Drive Through The Suburbs With Olivia Rodrigo, Be On Top Of The World With Russ, Hate Danger With Bikini Kill And More.

This is a big week for Olivia Rodrigo stans. Her pastel-colored, prom night-style tour is coming to Irving this Saturday, and this writer is extremely excited to unbottle her teenage breakup feels and cry over this unfair life (at the crisp age of 25). Yes, I know I’m kind of too old to be doing all that, but if Rodrigo was a pop star when I was in high school, it would have been over for y’all. Let me have my dramatic moment, please.

Anyway, I, too, like to drive around my suburban town listening to “driver’s license,” but can we talk about driver’s *safety* for a little bit? Take it from the dude who hit Cowboy’s owner Jerry Jones’ car southbound on Harry Hines Boulevard.

Poor guy was just trying to deliver a DoorDash order when he realized her had to take a left on Wolf Street. He slowed down at the intersection, made an illegal turn and then ended up right in Jones’ way. Out of all people, geez.

Bikini Kill at The Factory
Formed in Olympia, Washington in 1990, you have this band to thank for the riot grrrl movement. Putting feminism in the forefront unapologetically, Bikini Kill intersects punk music with advocacy for women’s rights. It disbanded in 1997 but has regrouped in recent years to tour. And with the Roe V. Wade situation, we need the energy this band dishes out more than ever. — FT

The Boulet Brothers’ Dragula Season 4 Tour at the Kessler Theater
If Rupaul’s Drag Race got possessed by demons, you’d get The Boulet Brothers’ Dragula. Instead of finding America’s next drag superstar, this drag competition show finds the world’s next drag supermonster. With spooky themes and “extermination” challenges (like being buried alive with bugs or eating pig’s brains), this is not for the faint of heart. On this tour, the top four supermonsters of the season are performing — Dahli, HoSo Terra Toma, Saint and Sigourney Beaver. — FT

OMD Souvenir OMD 40 Years at Southside Ballroom
OMD, also known as Orchestral Manoeuvres In The Dark, is celebrating its 40-year long career and the 40 million records they have sold worldwide with a special tour. Kick it with one of Britain’s iconic pop groups, whose music made them electronic synthesizer pioneers, at the Souvenir Greatest Hits 2022 North American Tour and dance to songs from Organization, Dazzle Ships and more. — SSV

Alyssa Edwards at House of Blues
A Mesquite native, Alyssa is one of the many Drag Race alums that have represented North Texas. She’s a professional dancer and a never-ending fountain of hilarious quotes which has made her a fan favorite of the Drag Race franchise. The “Love, Life & Lashes Tour” comes from London’s West End and explores her life, drag and finding love. — FT

Bartender Competition at Local Yocal BBQ and Grill
Presented by Garrison Brothers Distillery and Local Yocal BBQ and Grill in Mesquite, this bartending competition is promising great food, live music and exclusive cocktails while you watch local bartenders compete for a pair of AT&T Byron Nelson tickets. Sounds competitive, doesn’t it? The price of your ticket, if you attend, includes your valet parking, 3 exclusive cocktails, Garrison Brothers pours and plenty of appetizers. Worth it, to be honest. — SSV

This Much I Know To Be True at Texas Theatre
This special film is a one-night-only event, so you better be ready. Get intimate with Nick Cave and Warren Ellis as you watch the process of them bringing Ghosteen and Carnage to life during a period when live music was put on hold. This is the second documentary on Cave director Andrew Dominik has done, after 2016’s One More Time with Feeling, which followed the recording of The Bad Seed’s Skeleton Tree in the wake of Cave dealing with the death of his 15-year-old son. – FT

Russ at The Factory

The Atlanta rapper and producer has been releasing music on digital platforms since the early 2010s, but It wasn’t until his twelfth album There’s Really A Wolf in May 2017 that pulled him out of the independent scene. Under Colombia Records, the album, which includes hit singles “What They Want” and “Losin Control,” was certified platinum the following year and reached the list of Billboard Hot 100 tracks. He has since released three more albums, plus his latest 4-track EP If Not Now, When? released in April of this year. While he’s mentioned 50 Cent and Eminem to be his inspirations, Russ’ music is more R&B-oriented with melodic hooks — all produced, mixed, mastered, engineered and written himself. — SSV

Pearl Earl, Being Dead and Bad Dad Jokes at Harvest House
If you still haven’t checked out the music scene in Denton, here’s a good chance to. The three acts will bring you a blend of psych, surf and garage rock — making for a funky night. Pearl Earl is a Denton music staple and can be described as “The Beatles meet the Powerpuff Girls.” Bad Dad Jokes has been making psychedelia since 2018 and just released “Lucidity.” And the wonderfully weird Being Dead is visiting from Austin. — FT

EarthX Film Festival 2022
Running until the 15th, this festival has a widely diverse schedule of film and music events happening and multiple venues. This is the perfect event to see a treasure trove of local talent in one weekend. Music-wise, you can catch Will Hoge, Emily Scott Robinson, Abraham Alexander, Jamestown Revival, Isaac Hoskins, DJ Cassandra and Dj Unladylike. — FT

Presented by Parade of Flesh, New England-area hardcore punk band Restraining Order is hitting Texas for the first time with four tour dates this month. The band — which consists of previous members of hardcore bands such as Violence To Fade, Alert, Palehorse, Depths of Reality, Maniac and Revenge — formed in 2017 with a goal to create a “1982-style” hardcore punk band, and then later added a later ’70s attitude. Restraining Order released its first 4-track EP The Demo, with influences from Minor Threat and Circle Jerks, that year and then released its debut album This World Is Too Much in 2019. Welcome this retro band to Dallas! Kept In Line, Ozone, Imperial Slaughter and Gagging Order will open. — SSV

Fans of Grizzly Bear, Wavves, Dandy Warhols, you might like this North Texas-based psychedelic surf rock trio. Phantomelo — which consists of Amanda Cuenca, William Rakkar and Jeff Gerardi — formed in Arlington back in 2017 and released one EP, Pet Your Dog More, in 2019 three singles since then. That year, the band won Song Of The Year, EP Of The Year, Video Of The Year and Guitarist Of The Year awards at the Fort Worth Weekly in 2019. Yeah, you should see them live. Plus, the members are quite the environmentalists. Save the fucking planet. — SSV

Man Zack Release Party at Ridglea Theater
This emo rapper is dropping his new mixtape Butterfly Effect and you’re invited. Full of trap beats and guest features, the collection of songs explores personal challenges leading to growth. You can already listen to “BUTT3RFLY” and watch its music video that was just released this past weekend. The song features LUC-iD, who will be at the release party along with Yung Van, Two:22, Elijah Heaps, Yung Scuff and J4Y. — FT

Friday The 13th at Growl Records
If you’re not superstitious, get out of the house and enjoy a show at this beloved Arlington record shop/venue. Hard rock band Paper Street will be joined by metalheads Daughter of Demeter and indie darlings Summer Coat. A mix of spooky and sweet. — FT

It’s going to be one heck of a psychedelic night at Double Wide. Two North Texas psychedelic bands, Blue Feel and Psychic Love Child, are opening for funky Canada-based psychedelic band Apollo Suns on its Eastern Dreams tour date. Apollo Suns have won Instrumental Artist Of The Year at the Western Canadian Music Award twice since 2018 for its combination of instrumental, jazz, rock and funk sounds. If you like BADBADNOTGOOD, Snarky Puppy or Thundercat, this ones for you. — SSV

Girl Ultra is the moniker of Mexican R&B artist Mariana De Miguel. In 2017, after signing with a label, she released her debut EP Boys with a Spanish cover of Daniel Caesar’s track “Get You.” The singer has also collaborated with popular Mexican artists such as Cuco and Little Jesus and credits Beyonce, Destiny’s Child and Erykah Badu as her influences. Pasadena-based bedroom pop artist Jasper will open. — SSV

Dave Matthews Band at Dos Equis Pavilion
Now, something for the dads or those who have dad-aligned tastes — and there’s nothing wrong with either, of course! This iconic band has been infusing soft rock with folk and world music since ’91, releasing nine studio albums and a TON of live albums. DMB just released a pro-shot video from its 2019 stop at Dos Equis Pavilion, the performance of “JTR” in the rain. It’s a movie moment. — FT

Our superstar prom queen! <3 Olivia Rodrigo, the Disney actress-turned-international pop sensation, is currently on her first-ever tour promoting her debut teenage-angsty album SOUR. Rodrigo’s music career rose to fame with her breakthrough track “driver’s license,” an indie pop and power ballad, that documents Rodrigo’s painful, high-profile break-up. The track later gained widespread critical acclaim — along with SOUR. She has won a handful of accolades since the start of her career and was named Entertainer of the Year by Time in 2021 and Woman of the Year by Billboard this year — at the age of 19. We. Shall. Stan. — SSV

Still Woozy at The Factory

Still Woozy is the project of Bay Area-based psychedelic bedroom-pop singer-songwriter Sven Gamsky. In 2021, he released his 13-track debut album If This Isn’t Nice, I Don’t Know What Is, a reference to author Kurt Vonnegut, with singles including “Window,” “Rocky” and “Get Down.” — SSV