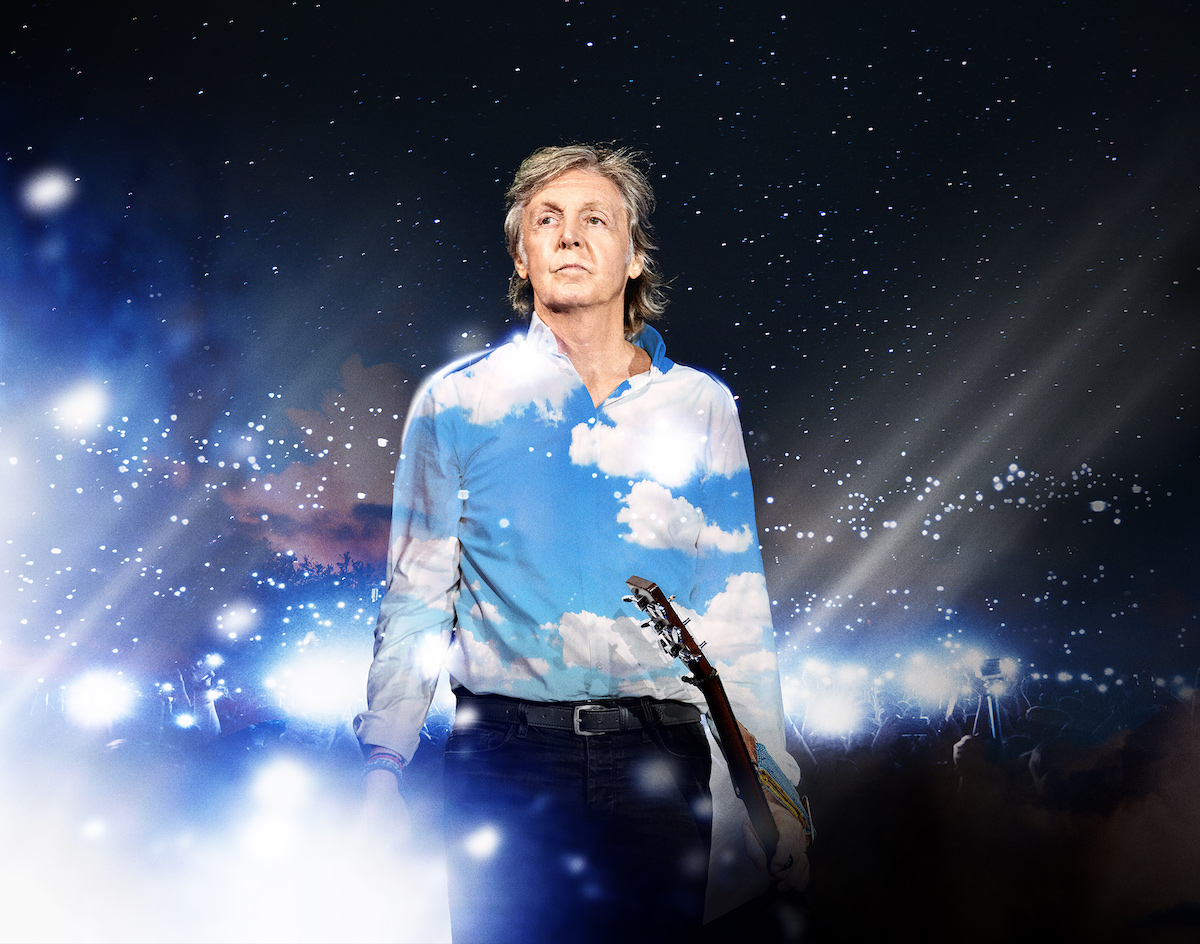 This Week In Dallas, You Can Get Back With Paul McCartney, Cruise With Smokey Robinson, Feel The Rush With Aly & AJ And More.

We’re halfway through May which means a closer step to soul-killing summer heat — though we’re just about there already with record-breaking days — and the most anticipated music festival of our neck of the woods, the So What?! Music Festival. It will no doubt be a scorcher, but the exciting live music of multiple genres should be enough to keep you going.

We already relayed the great acts that will be present, but with less than two weeks to go until the weekend, let’s start thinking about getting organized. The festival made its own handy online schedule builder so you can get your ducks in a row and plan your So What?! weekend down to the hour. Just register yourself on the site, flip through the schedule, find your favorite artists and add them to your roster. And make sure to get some locals in there, like Lil Lotus, 10K.Caash, Penny Bored, Cameron McCloud, to name a few.

Festival organizers also spent last weekend stopping by the Hot Topics around the city to give the first five customers who show up in merch from a So What?! artist free weekend passes. Sweet.

As we wait for Memorial Day weekend in anticipation, here are some other music events going on in town to get the blood flowing. — Frances Tingle

Destroyer at Tulips
Coming together in Vancouver in 1995, Destroyer has released a whopping 13 studio albums, all taking on a slightly different sound but consistently filled with biting lyricism and heart-tugging soundscapes. Recently, the poor band was stranded after having to fire its tour bus driver for crashing twice, asking Twitter if any drivers were available. So when you’re at Tulips jamming along to “Painter In Your Pocket,” know that some sacrifices were made. — FT

Paul McCartney at Dickies Arena
Can you believe this will be McCartney’s first show in Fort Worth since his Wings tour stop in 1976? As Dickies quoted from the Beatle, “I said at the end of the last tour that I’d see you next time. I said I was going to get back to you. Well, I got back!” Good things truly come to those who wait. Lately, he released “Women and Wives,” a studio outtake from McCartney III. This will be his only Texas stop on the tour, so you better head to Fort Worth for this momentous show. — FT

Mexican Standoff Bartending Competition at Vidorra Dallas
At this three-part semi-final event, the competing bartenders only have 15 minutes to make a cocktail that incorporates a secret ingredient that will be announced at the start of each round as well as a Tanteo Tequila. Oh, yeah, because they’re presenting this wild event! The audience and a panel of judges will get to taste each one and vote for their favorite. The semi-final grand prize winner will get $10,000 that they will split to a charity of their choice and an all-expense-paid to Mexico for the championship in November. Local bartender Tommy Holbert will emcee and Hannah Davis, head news anchor for WFAA Good Morning Texas, and Shannon Murray, reporter//anchor at KDFW-TV, will be on the judging panel. — SSV

Wallows at The Factory
Wallows, the alternative rock band that formed in southern California, is comprised of Dylan Minnette, Braeden Lemasters and Cole Preston. The band originally formed when they were teenagers in 2011 — the same year they played Warped Tour under a different name. In 2017, Wallows released “Pleaser,” one of many independent songs, which reached No. 2 on Spotify Global Viral 50 Chart. The next year they signed to Atlantic Records and released its debut EP Spring with its debut studio album Nothing Happens released the following year. The band’s second album Tell Me That It’s Over released in March of this year.  — SSV

T-Pain at The Factory — RESCHEDULED TO JUNE 24 AT TEXAS TRUST CU THEATER
The Dallas-T-Pain relationship is a little rocky right now. ICYMI, his Dallas show undersold compared to the rest of his tour’s stops and the rapper took to TikTok to air his grievances. “What the fuck Dallas? […] Y’all don’t fuck with me? […] I wore cowboy hats many times,” he scolds. The man pioneered the creative use of autotune, show him some respect! — FT

Caifanes at HOB
If there were a Mexican version of The Cure, it would be Caifanes. The somber pop rock/post-punk band formed in 1987 with the whole British new wave look (very Robert Smith) and sound. Caifanes, who now have international fame, are one of the many Mexican rock bands, including Mana and Cafe Tacvba, that catapulted the Rock En Español movement of the 1990s. Some of its most popular songs include “Afuera,” “Aqui No Es Asi” and the cumbia song “La Negra Tomasa.” — SSV

Hannah Gadsby at The Majestic
The Emmy award-winning Australian comedian and actress is bringing her stand-up show Body Of Work to Dallas! Gadsby shows hit on topics such as homosexuality, art history, dysfunctional family and mental illness. For example, her live comedy performance Nanette was partially a response to the debate over Australia’s same-sex marriage and after her ADHD and autism diagnosis — which she discusses further in her show Douglas. — SSV

Post Animal at Club Dada
Chicago-bred, Post Animal is psych-rock band that knows how to bang out a groovy tune. It just put out its third album Love Gibberish. Members include Dalton Allison, Jake Hirshland, Javi Reyes, Wesley Toledo, Matt Williams and originally, Joe Keery, who you may know as Steve from Stranger Things. — FT

Phoebe Bridgers at Toyota Music Factory
Phoebe Bridgers, the former bassist of Sloppy Jane, remains one of the best new artists in the past few years. The indie rock/indie folk singer-songwriter released her debut album Stranger in the Alps in 2017 and received critical acclaim. Her following album Punisher received the same acclaim but with mainstream recognition. She is currently on her Reunion tour, her second solo tour, supporting Punisher after covid-19 canceled her tour plans. — SSV

Elm Street Tattoo Fest at Trees
The time has come once again for this yearly celebration of tattoos. Put on by Deep Ellum’s Elm Street Tattoo and owner Oliver Peck, this event was originally set around a Friday the 13th, but has become an end-of-May-thing. Expect loads of world-renown tattooists, vendors, art shows and musical guests, both local and touring.      — FT

Bright Eyes at The Factory
We know Bright Eyes is supposed to be dark and tortured songs by singer-songwriter Conor Oberst, but, damn they are so pretty. From Omaha, Nebraska, Oberst became one of the most popular indie icons of the mid-’90s. Oberst was joined by multi-instrumentalists Mike Mogis and Nate Walcott and have made albums together through the 2000s, such as Letting Off The Happiness and Fevers and Mirrors, until its nine-year hiatus. In February, Bright Eyes announced it would reissue its first nine studio albums under its new label Dead Oceans with each getting a six-track companion EP featuring re-recorded songs. — SSV

Bookstore Disco w/ Boom Boom Pum at The Wild Detectives
It’s a dance party at a bookstore, it’s literally going to be … lit. Yeah, we said it. Come get a Latin club music experience with Nick van House, Max Power and Xolo.TX. — SSV

Aly & AJ at HOB
Now all I want is just my stuff back!!! Do you get that? Let me repeat that –I want my stuff back!!! This sister musical duo had a sound that you could take with you even after outgrowing the Disney Channel days. That’s why their recent comeback made so much sense. They just released the “A&A version” of “Like Woah,” one of their best hits that got better with age. And don’t sleep on 2022’s A Touch of the Beat Gets You Up on Your Feet Gets You Out and Then Into the Sun, it’s full of breezy, feel-good pop goodness. RIYL Taylor Swift and Haim. — FT

Kodak Black at The Factory
Kodak Black, frequently called a mumble rapper, rose to fame for his 2014 single “No Flockin.” He was named one of XXL magazine’s 2016 Freshman Class artists — before the release of his debut album Painting Pictures. Despite years of legal issues and public controversies, Kodak Black has still received mainstream success. — SSV

Three Links Garage Sale at Three Links
Free to attend, one of our favorite bars is back with its monthly garage sale. Artists, collectors, bakers, thrifters and any other creative -er’s can sign up to reserve their spot to sell their wares. While you browse, enjoy food from Hernandez BBQ and music from DJ Charlie Park. — FT

Rex Orange County at Toyota Music Factory
Loving is Easy with Alex O’Connor, the man behind this hip-hop and soul-influenced indie pop project. WHO CARES? was released this year and was met with love for its intimate look at O’Connor’s doubts and anxiety which was recorded in just 12 days. There’s a Tyler The Creator feature on it, too. — FT

Smokey Robinson at Winspear Opera House
A legend is coming to town. Singer-songwriter, producer and co-founder of Motown Records Smokey Robinson have a near-five decade-long career. He has his own Hollywood star, as well as one with his doo-wop group The Miracles, has been inducted into the Kennedy Center and a BET Lifetime Achievement Award.– FT

Carla Morrison at Majestic Theater
The Grammy award-winning indie-pop Mexican singer is coming to Dallas during her 14-day tour this Sunday. She released her latest album El Ranacimiento this year — a reinvented, mature album that deals with heartbreak and emotional revelations. — SSV