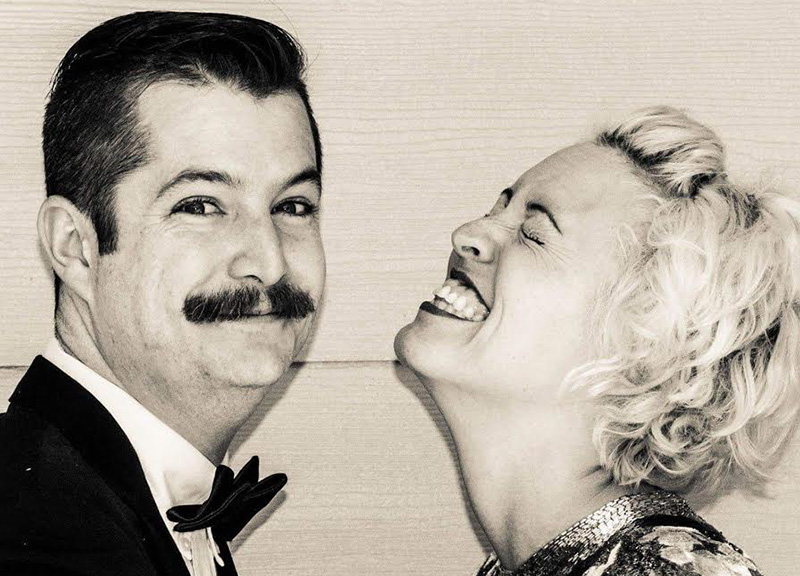 Just-Announced Stomping Ground Comedy Theater Aims To Give Aspiring Comics And Regular Joes Alike The Tools To Use Laughter As A Healing Agent.

Lindsay Goldapp, the managing director of the newly unveiled Stomping Ground Comedy Theater and Training Center, had to grapple with a curious problem over the course of bringing her new venture to life.

“This is gonna sound terrible,” she says, “[but] we never wanted to own a theater.”

While mired in an uncertain development stage, Goldapp admits to moments of deep pessimism. Eventually, expressing her frustrations to friends in the comedy and performing community led to a pep talk over Skype from actress and Dallas native Allison Tolman — a talk that would ultimately push Goldapp and her partners, including Goldapp’s husband Cameron Goldapp (Stomping Ground’s conservatory director), to see the project through.

Says Lindsay: “[Tolman] basically said, ‘Dallas needs this, the Goldapps are the best people to help build this and you’ve totally got this.’ And she kind of got us together with a few creative brains in the city, and a few artistic brains in the city, to really helps us talk through what our vision was.”

Goldapp recently took to Facebook to publicly unveil Stomping Ground, a nonprofit undertaking that provides a mix of comedy performances, improv and sketch training, as well as several outreach programs that use humor and improv to promote well-being. The choice to operate as a nonprofit was an important one to the theater’s development. While she and her partners knew they wanted to find some way to make a deeper contribution to Dallas’ comedy scene, it took that commitment to using their space, and their talents, in service of the community to push them forward and bring the project to life.

“We toyed with the idea of being for-profit, and kind of having the more traditional model of a comedy theater and improv training center, but it just didn’t feel right,” Goldapp says. “We wanted to build a community. That appealed to us.”

Stomping Ground hasn’t opened a physical space yet – their goal is to have a location open by early 2018, although that will depend on meeting fundraising efforts and securing a place that suits their needs. However, their debut comes with the announcement that they have scheduled several comedy workshops in various spots in Dallas over the next few months, offering classes that teach different approaches to improv and comedy songwriting, as well as a combination Laughter Yoga and introductory improv session. They’ll also offer an Improv for Caregivers class, designed to teach people who work with patients suffering from Alzheimer’s, dementia and brain injury techniques ways to help them connect with their patients.

Researchers have lately started paying attention to improv’s potential for providing positive mental health benefits. And theaters are taking note, too: Second City, one of the most iconic improv institutions in the world, provides classes designed to help individuals who suffer from anxiety disorders.

The decision to offer therapeutic and outreach programs means Stomping Ground will face issues that don’t impact most theaters. These community-oriented activities will be concentrated in the theater’s Improv for Life program, where improv workshops and training sessions will be used to help those with special needs, as well as to provide support and instruction for caregivers. To prepare them for challenges that come with outreach, Stomping Ground has taken care to work with people familiar with the world of wellness and mental health, as well as the world of comedy.

“We knew that when it came to something as serious as mental health and therapeutic improv, you can’t just wing it,” Goldapp says. “You have to work with professionals who know what they’re doing.”

The theater’s directors include Improv for Life program director Andrea Baum, a licensed counselor who will help lead a series of classes designed to support special needs individuals, along with caregivers who can use skills picked up in improv classes to help their clients. Comic Brandon Davidson is taking a role at the theater that will involve providing mental health and wellness support. In addition to performing as a stand-up, his nine-to-five involves delivering training and resource guidance to people in various outreach and mental health fields. He’ll be available to help ensure instructors have the appropriate resources to handle more challenging issues that come up. He’s also someone performers can turn to when they need help with their own wellness struggles.

Stomping Ground is also taking steps to provide a welcoming space for diverse performers, with improviser and actress Ashley Rountree serving as a director of outreach and a women’s advocate, and comic Byron Stamps taking a role as the theater’s diversity director.

Stories about harassment and exclusion have recently exposed ways in which many improv communities around the country have failed to provide safe environments for their performers. Stomping Ground wants to keep clear channels of support open so anyone made to feel unsafe or unwelcome can address the matter, and feel confident that their concerns will be taken seriously. By actively promoting diverse perspectives, the theater aims to avoid becoming insular or forbidding, so no prospective performers have to worry that there will not be a place for them.

“We know there is diverse talent here [in Dallas], and we want to take steps to make sure our theater is actively building that kind of community,” Goldapp says. “We’ve seen how rich in creativity it makes [a] community.

Now that Goldapp and her team have outlined their objectives and assembled a team that can capably handle matters of performance and outreach, their next steps involve securing their home, and assembling lineups of shows. Their goal is to offer shows that deliver broadly appealing work for general Dallas audiences, while still making room in the schedule for more esoteric acts that can sate the appetites of comedy fans who crave entertainment that defies expectations.

The Goldapps are already a familiar presence to local comedy fans who keep their ear to the ground, as they’ve been a major part of #NOSHOW, a traveling experimental comedy show that encourages performers to deliver bolder, less orthodox comedy, while using a promotion strategy that keeps location details conspicuously absent. What happens to this show when Stomping Ground has its doors open, and its stage set?

“We’re kind of deciding what the future looks like with #NOSHOW,” Goldapp concedes. “We definitely still plan on continuing it. That experimentation is important to us.”

There are still some final hurdles for Stomping Ground to clear – after all, they’re still technically homeless. But they’ve set a foundation based around community service, outreach and a sense of openness. And if they pull it off, they’ll add something unique to Dallas’ creative culture, and the city as a whole.

Hopefully, that capacity to make a difference will take some of the sting out of owning a theater.