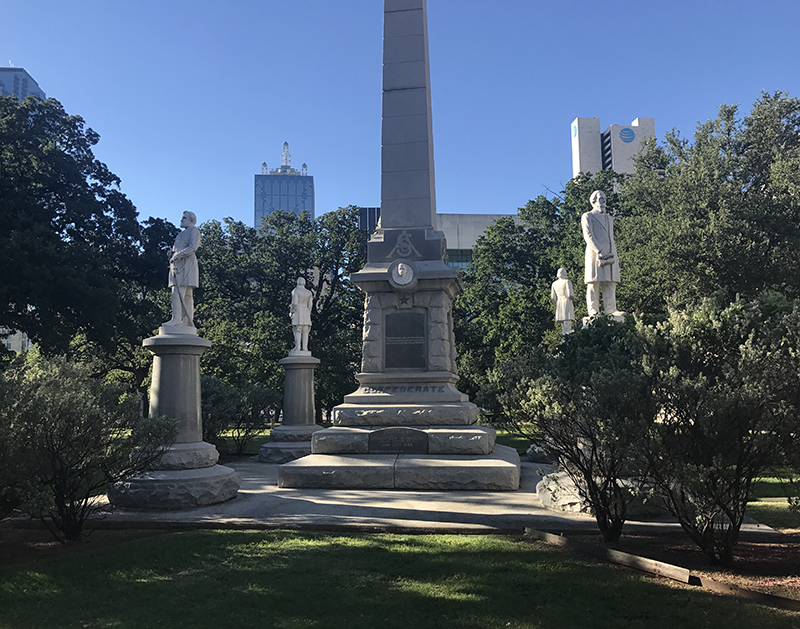 Dallas Officials Have Suggested It’ll Cost $1.8 Million To Remove Two Confederate Monuments. We’re Pretty Sure We Can Do It Ourselves For Way Less.

The proposed costs of removing just two Confederate monuments from their prominent public positions in Dallas seems staggering at first blush. It’s almost as if these numbers were pulled out of thin air so as to scare local leaders out of removing them!

That’s the suspicion of one member on Mayor Mike Rawlings’ 20-member task force on confederate monuments, anyway. After city staff suggested in an internal memo last week that it could cost up a combined $1.8 million to remove both the statue of Robert E. Lee at Robert E. Lee Park and the stone Confederate monument at Pioneer Plaza from public view, a task force member we spoke to on the condition of anonymity suggested that the figure was completely bogus. It certainly hasn’t come from the task force, our source says, given that the task force won’t hold its first meeting until Thursday of this week.

“We haven’t even met yet,” our source says. “So when I heard that figure, I was just really confused by it.”

The numbers certainly are confusing. The stone monument would cost $1.2 million to remove and the Lee statue would cost $600,000? In what world?

Probably not the real one, our source suggests.

“I’m sure there will be a strong consensus on removing the statues,” he says. “But I feel like that’s a strong overestimation of what it’s actually going to cost.”

We agree! And, furthermore, we decided to run some numbers to prove it.

First, we took a look at dollar amounts and hours spent by other institutions to remove their own monuments to the Confederacy.

On the time front, let’s use as an example the University of Texas at Austin, which took down four Confederate statues over the course of a single night last week. Is Dallas that efficient? Maybe not. So let’s assume it somehow takes Dallas a whole 30 days to remove two monuments, working at 1/60th the speed of its UT counterparts. Seems fair, right?

Now, what about costs? Two years ago, the expert stonemason group Curtis Hunt Restorations based in San Antonio told the Denton Record-Chronicle that it would take about five days and $15,000 to take apart and reassemble Denton’s Confederate monument on the Downtown Square. Because we’re again being overly fair to City Hall, let’s take the Hunt group’s $3,000-per-day charge and also spread it out over 30 days. Let’s assume that’s still not enough and add an extra $10,000 to these costs.

Lastly, let’s consider all other costs. We’ll need a flatbed truck, a bulldozer, the strongest crane you can rent, at least eight crew workers to actually work the equipment, and at least two off-duty cops to oversee it all for 30 days.

Now, let’s apply all that to just the stone monument at Pioneer Plaza. Here are our cost estimates.

The city staff memo already estimated that removing the statue of General Lee will cost about half of what it will take to remove the stone monument — but let’s keep being difficult and say that both will cost the same. That still brings our estimate to just $650,000 for removing both monuments.

Assuming the city is steadfast on budgeting $1.8 million to the removal of these two statues — y’know, just in case! — that still leaves $1.15 million in the budget to rent or buy some warehouse storage for these monuments. Because, hey, they’ve gotta go somewhere! Well, luckily for Dallas taxpayers, we’ve found this warehouse for sale in Dallas for $542,000. Let’s also dedicate another $100,000 closing costs and building upkeep, just because.

That brings the final total to $1,292,000 — a figure at which point we’re confident the job could get done both well and safely. And let’s just leave the figures there, shall we? Since it’s likely we’ve grossly overestimated the costs and length of these projects, whoever takes on this gig can just pocket any savings made along the way rather than add on extra costs to make taking on the job worthwhile.

To that end, we would like to officially enter our hat into the ring as a possible contractor for this gig. If nothing else, our proposal guarantees the city spending at least $500,000 less than it’s currently planning on dropping.

Hey, it’d be our pleasure!