Songs of the Week: Tommy & Linda, Sara King and More. 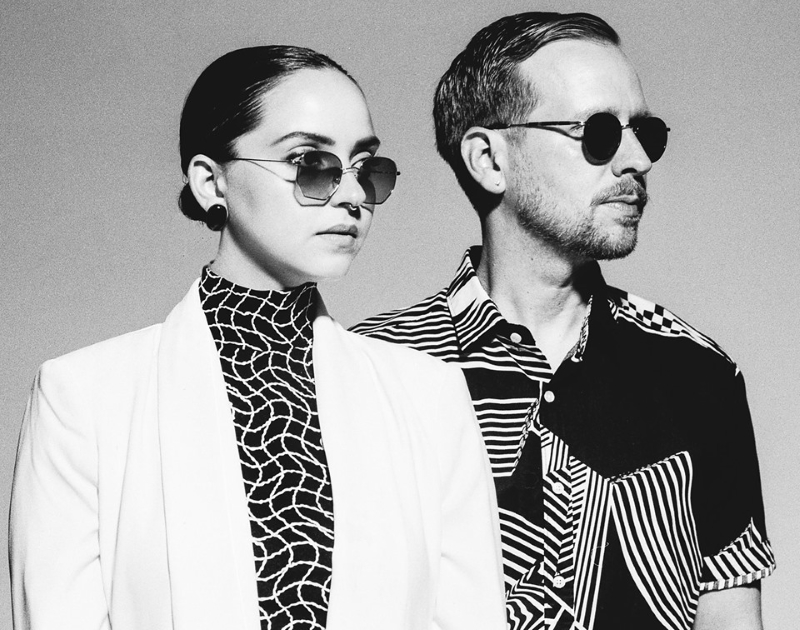 Tommy & Linda – “Beach Bums”
RIYL: Borrowed nostalgia for the unremembered ‘80s.
What else you should know: Last week, DJ Sober announced that he co-founded a label called Dial-Up Records. This week, the label’s first single premiered at Gorilla vs Bear. It’s also the first offering from “mysterious” duo Tommy & Linda, whose reverse twins are Sober and Sudie. (Oh, like you didn’t know.)

Sara King – “Dreamz”
RIYL: Sleeper hits.
What else you should know: King’s been releasing covers of pop tunes to her YouTube channel for five years now, and she’s garnered something of a loyal following on that platform. For instance, her “Redbone” cover has over a million views! Now, she’s toying with writing some glitter pop originals to call her own — and she’s got some great folks helping her out. Released a few weeks ago, “Dreamz” is the first original tune she’s put out, and it was produced by the wonderful Herrick & Hooley. She’s got an EP called Heat on the way, too. She’ll host a release show/party for that next Saturday, August 4, at Texas Theatre.

OG Garden – “Where Does the Love Go”
RIYL: Crystal balls.
What else you should know: This “future soul” sextet out of Denton blends the funkiness of Stevie Wonder with the sexiness of Frank Ocean. There are R&B influences both new and old here, along with some jazz and, they say, punk ones, too. For me, it’s the sax that really makes it all click.

Upsetting — Everything I’ve Done So Far
RIYL: Grown-up Sexx.
What else you should know: This band used to be called Teenage Sexx. But they’re not teenagers anymore, which is why this trio decided to change its name before releasing its debut LP via State Fair Records. Is it the best band name? I don’t know. That’s for other folks to decide. I’m here for the lo-fi emo, and still waiting for the knives to come out. Oh, and there’s a release show fo rthis tonight (July 27) at Andy’s.

Oh, Weatherly — Lips Like Oxygen
RIYL: Mayday Parade.
What else you should know: Last fall, this young Dallas band announced signing with Hopeless Records, the label home of some of their biggest influences — Circa Survive, Bayside, Avenged Sevenfold and All Time Low. Their debut LP for the label is out today, and a release show for it will go down this Sunday, July 29 at The Prophet Bar. Their album was co-produced by Jake Bundrick of Mayday Parade, and you can pick up vinyl copies of it at the show. They’re blue with pink splatter.

Dan Johnson — Hemingway Project
RIYL: Good causes.
What else you should know: The Fort Worth singer-songwriter’s new Hemingway Project album is a nod to his Operation Hemingway charity that aims to decrease the rate of veteran suicides. Johnson’s veteran father took his own life while suffering from PTSD. It’s a powerful message/song/album/cause, to be sure. There’s a release show for it this Sunday, July 29 at Magnolia Motor Lounge.

Kirby Brown – “Gimme a Week”
RIYL: Self-discovery.
What else you should know: Back when Brown originally left Dallas — and before he settled in Nashville — he tried his hand at New York living for a minute. It apparently didn’t stick. As he begins “Gimme a Week,” the lead single from his forthcoming Uncommon Prayer LP, “I went up to the city to find myself but didn’t find a thing at all / Except for a couple new ways to forget what I was looking for.” It premiered today over at Wide Open Country. In the video above, you’ll notice a slew of Texas Gentlemen as his backing band. And though this clip was shot in Nashville, the album was recorded a couple years back at FAME Studios in Muscle Shoals.

Cody Jinks — Lifers
RIYL: When country music didn’t have drum machines in it.
What else you should know: We’ve been anticipating this one for a minute. This is the quote-unquote outlaw’s debut for Rounder Records after a long, successful career as an independent. From the sounds of it, he’s headed for even bigger things, which is saying something considering he was already selling out 5,000-capacity rooms in some markets with no label backing him. Anyway, he’ll celebrate the release with the hometown crowd by throwing an all-day music festival named after one of his old tunes. The inaugural Loud & Heavy Fest goes down August 18, at Panther Island Pavilion.

Jason Eady – “That’s Alright”
RIYL: Meet-cutes.
What else you should know: It’s the true story of Eady’s move from Mississippi to Fort Worth where he met his now-wife, fellow country singer Courtney Patton! She sings the harmonies on this tune — and the rest of the record, for that matter. It premiered this week over at The Boot. The rest of the album drops August 10.

Lil Splurge – “Free Granny”
RIYL: Waving your mom’s gun around.
What else you should know: I’m not sure what I just watched exactly, but the consensus in the comment sections seems to be that this Arlington 16-year-old is a poor man’s Hoodrich Pablo.

Wesley Jenson – Something Else
RIYL: Something borrowed.
What else you should know: Following the previously released Something Old and Something Else, this is the third of four EPs that the ambitious Dentonite is putting out this year. Like the others, it’s a catchy little mix of ‘60s pop and modern indie rock. It came out today. But it could have just as easily come out in 2008 – or 1968, for that matter.

Hall Johnson – “Cabins”
RIYL: Calling pigs in a blanket brioche.
What else you should know: These Mid-Cities teens named themselves after a street in Grapevine. The terrific Buon Giorno coffee shop, located on HJ, has a certain reputation as a hangout spot, and even as a Dallas resident these days, I still find myself making the 30-minute trek to hit it up at least once a month. I’m gonna go out on a limb and say that if you hit it up enough times, you’ll eventually run into these guys there, no doubt plotting their next moves – that is, when they’re not off in the big city, opening for acts like Beach Fossils, Post Animal or Jerry Paper.

Jake Schrock — Tropical Depression
RIYL: Strange things.
What else you should know: We’ve said it before, and we’ll say it again: “The freshly signed Holodeck artist rides a fine line here on the title track from his upcoming full-length, in that the instrumental electronic jam could just as easily soundtrack a zoned-out session of typing away at the laptop at work as it could a most-happening pool party.” It came out today both digitally and on cassette.

Ben Hixon — Living Quarters
RIYL: Selling five copies of The Three EPs by The Beta Band.
What else you should know: The longtime Josey Records exployee, record producer and Dolfin Records label head also puts out records of his own, like this new collection of house music he put out last week. Hey, I bet I know where you could score a physical copy!

Conner Youngblood — “Los Angeles”
RIYL: People that can do it all.
What else you should know: We first wrote about Youngblood on our very first day in business, way back in 2012. We’ve since kept it up, hailing his track “A Summer Song” our sixth favorite song of 2016. But it seems Youngblood isn’t counting any of that. This, he says, is the first single from his forthcoming actual debut LP, Cheyenne, which features the young genius playing over 30 musical instruments. He apparently plays everything, even the impossible stuff like harp, bass clarinet and tabla. It’ll be released via Counter Records on August 17.

Juan Mone – “Ice Skate (feat. TheyCallHimAP)”
RIYL: Diamonds by the boatload.
What else you should know: The Dallas rapper’s second-ever mixtape was produced by DJ Situation, a producer named for his killer abs. GTL, amiright? Anyway, the vid above is worth the watch, if only for Denver rapper TheyCallHimAP coming along to murder his guest verse. Listen to the rest of the tape here.

Black Taffy — Parlour Arcana
RIYL: Wow and flutter.
What else you should know: The former This Will Destroy You-er is back with a release under the Black Taffy name he’s been DJing and producing and composing ambient music under for a few years now. He’s created four “pillowy worlds of wow and flutter” on this EP, which is available via a limited run of 150 cassettes. Hit the link above to snag one.

Soggy – Passion Aggression
RIYL: Doing it yourself.
What else you should know: The Denton Barf Wave outfit rides ebbs and flows of louds and softs on its second EP. Plucked acoustic guitars and emo lamenting give way to bouts of shredding and wailing. Rinse and repeat, keeping it interesting for the breadth of five tracks.

Teleoso – “Opinions”
RIYL: Having, like, an opinion, man.
What else you should know: Who is the best female rapper from DFW? Alsace Carcione? Sam Lao? DaShawn Shauntá? Cuban Doll? Asian Doll? Nezi Momodu? There are so many other good ones that I’m leaving off, too. Seriously, though, who are some of your faves? Drop me a line! This is the second Teleoso track I’ve heard, and I think it is really great. She’s got a similar flow to Snow Tha Product, who I also dig.