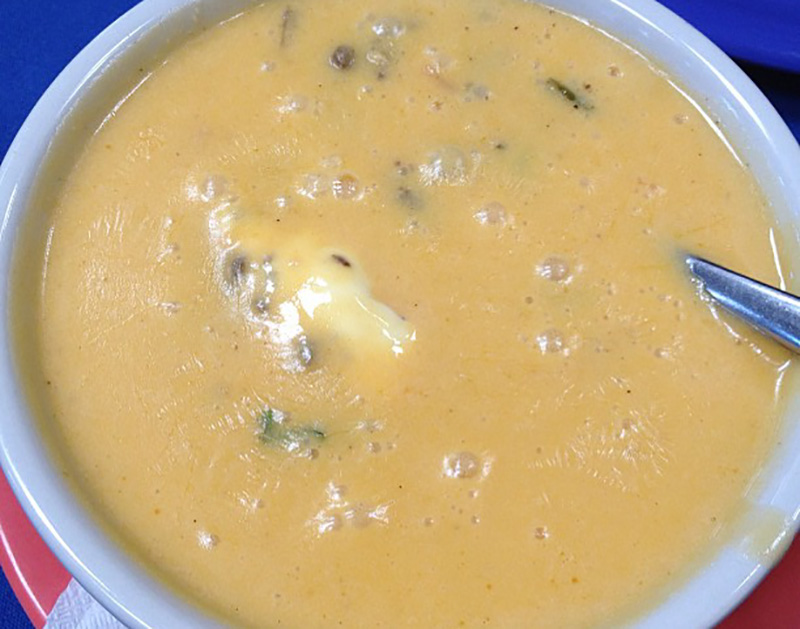 We Also Dislike Jerry Jones And Have ‘No Opinion’ On Joe Rogan. Most Surprising, Though, Is That Most Of Us Haven’t Heard Of Luka Doncic. Wait, Really?

Are Texans predictable? No… but, then again, we knew you were going to say that.

A new poll released last week finds that Texans are, in fact, a mostly easy-to-peg lot — well, when it comes to some things, anyway.

The top line of the poll of 882 likely November voters from Texas — conducted by YouGov and funded by the Center for Public Opinion at the University of Massachusetts (Lowell) — brings a bit of a surprise in finding that general election support for the former Vice President Joe Biden falls within the margin of error for the support Texans have for incumbent President Donald Trump. But as the team at FOX 4 has already pointed out, the real juicy findings of this study are the throwaway questions it snuck in at its end.

It’s here in this last section, as Texans are asked their thoughts on various people and things present throughout the state, where our state’s real hegemony rears its head. In the survey’s final stretch, responders share their stances on 17 Texas-related people or things by lumping them into one of four categories: favorable, unfavorable, no opinion or never heard of. 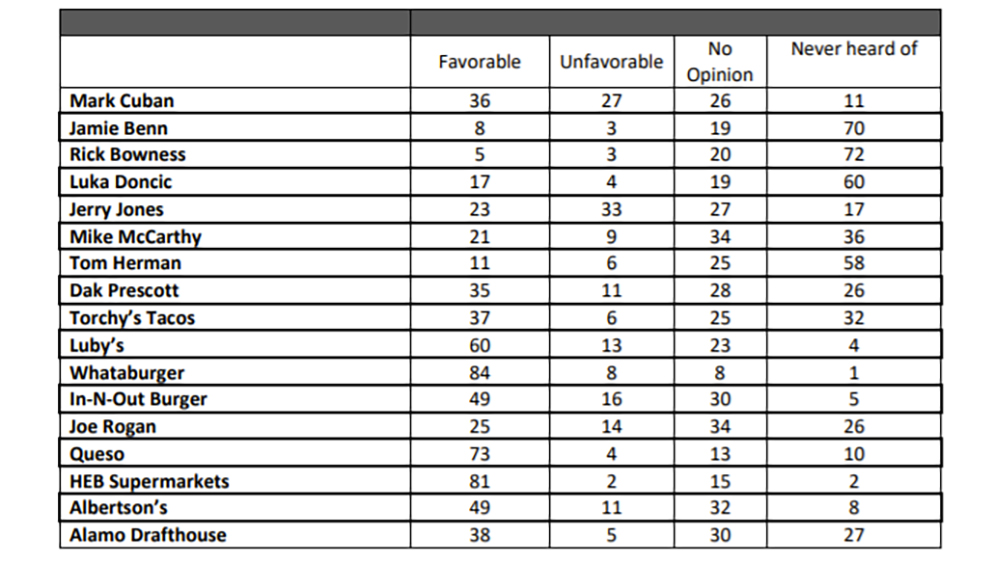 For the most part, the answers provided here are right in line with what one might expect.

Texas institutions Whataburger and HEB Supermarkets both received incredibly high favorable response rates, with the former receiving at 84 percent thumb-up rate and the latter earning 81 percent. (We’d love to speak to the one percent of Texans who have never heard of Whataburger, though.) The third highest-ranking item on the survey’s favorability scale, meanwhile, was queso. Which… y’know, that definitely tracks.

SEE ALSO: The 18 Most Essential Quesos In Dallas.

Also in line with expectation is the fact that the icon with the highest unfavorable rate on the survey is Dallas Cowboys owner Jerry Jones, who earned himself a 33 percent thumbs-down rate. Mark Cuban, the owner of the Dallas Mavericks, comes in second in these rankings, earning a 27 percent unfavorable stake. But whereas Jones boasts a mere 23 percent favorable public opinion (well below his unfavorability percentage), Cuban at least has more people in his corner than against him with his favorability percentage checking in at a solid 36 percent.

Not entirely surprising is that the two newest Texans on the list are also the two with the highest “no opinion” percentages. Just three games into his tenure as the new head coach of the Dallas Cowboys, Texans seem to be giving Mike McCarthy the benefit of the doubt, giving him a 34 percent “no opinion” percentage for the time being. Brand-new-to-Austin comedian and podcasting icon Joe Rogan, meanwhile, ties McCarthy in the “no opinion” column with the same 34 percent rate.

It must be said, though: The “never heard of” column bears only disappointment. Despite reaching this year’s Stanley Cup Final, Dallas Stars captain Jamie Benn and head coach Rick Bowness top this column, with 70 and 72 percent of responders respectively not recognizing their names. While that hurts our inner Stars fan souls, we must admit that it’s not entirely surprising; the much bigger surprise is that, despite him currently boasting the second best-selling jersey in the NBA, 60 percent of respondents have never heard of Dallas Mavericks superstar Luka Doncic.

Methodology could perhaps be blamed for some of these figures. While this poll purports itself as being a poll of Texans at large, the figures and entities mentioned in its most interesting final question are mostly North Texas-related — with Rogan, HEB and University of Texas football coach Tom Herman being the clear exceptions.

Or, perhaps, it all just confirms our own long-held belief that no one cares about Houston, Austin or San Antonio.

Can we get some polling on that next?