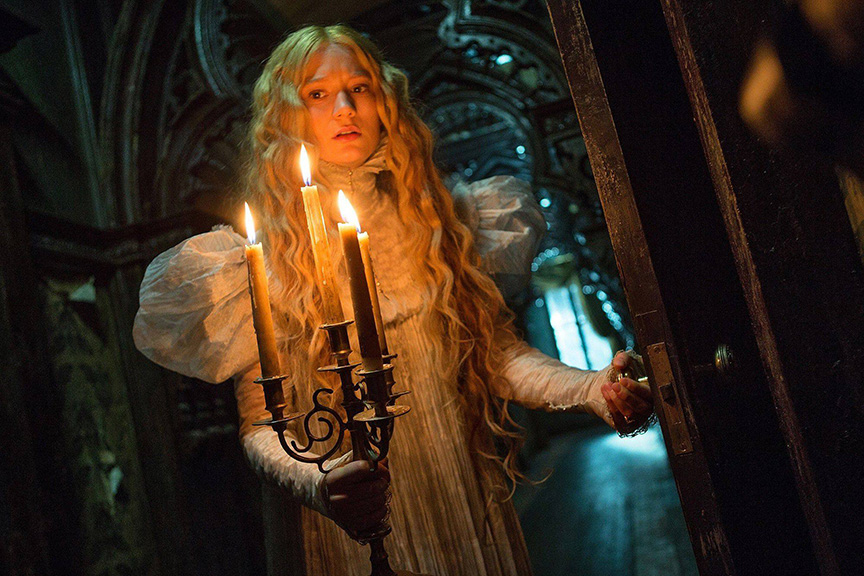 Crimson Peak Is An Old-School Gothic Tale With Modern Sensibilities.

At this year's Fantastic Fest in Austin, I was lucky enough to attend a screening of Crimson Peak where Guillermo Del Toro introduced his film. In that talk, he described how, this time around, he wanted to give people “eye protein, not eye candy.”

Suffice to say, Del Toro definitely delivered on the visual side of things with his new film. Crimson Peak is hands-down one of the most darkly gorgeous and fantastical movies we've since the director's Pan's Labyrinth. Everything from the costumes to the set design to the shot composition is beautiful — and eerie as hell, too.

Also like Pan's Labyrinth, this one too is a fable. It tells its story from the point of view Mia Wasikowska as Edith Cushing, a budding fiction author in Buffalo, New York. We first see her trying to sell her new book — “not a ghost story, but a story with ghosts in it.” Of course, it just so happens that Edith believes in and has seen ghosts throughout her childhood This doesn't please her editor much, though; he'd prefer a more traditional love story. But Edith, who lives with her important man-of-industry father, doesn't know much about love — until, of course, her life gets turned upside down and a mysterious stranger (Tumblr sweetheart Tom Hiddleston) comes to town to get funding for a new invention.

This stranger, Thomas Sharpe, is a down-on-his-luck aristocrat who wants to get the Sharpe name and his property, the Allerdale Estate, back to its former glory with a new machine that will excavate the red clay from the land nearby. Hiddleston plays Sharpe as a conflicted but determined character — the role with the biggest arc of the movie — but he's also a bit of a pushover when it comes to his his more strong-willed sister, Lucille (Jessica Chastain). Her outwardly prim-and-proper exterior occasionally hints at something darker. Out of the entire cast, Chastain looks like she's having the most fun. Here, she plays a deliciously subtle malevolent presence — a new type of role for her and one that should get her her more diverse roles moving forward.

After a very brief courtship — as happens in all of these types of stories — Edith gives up her literary ambitions to marry the charming Sharpe, which prompts a rather hasty move to Allerdale Hall across the pond. It's at this point that the movie gets much more interesting. From a visual standpoint, the Estate is a wonderful, almost otherworldly place. You can tell that, in its heyday, it would have been a magnificent place. But, as we see it, it's got a huge hole in the roof — one that lets in a constant flurry of snow and leaves. The pipes rattle and shake when the faucets are turned on. There's a constant howling of the winter wind, and never a lack of random creaking. Most eerily, the movie's name comes from the Estate's infamous nickname: The red clay seeps through the snow, giving the appearance of blood coming out of the ground.

The more time Edith spends in Allerdale, the more its oddities, and even some ghosts, come to haunt her. But there's something strangely non-threatening about them — even as the Sharpe twins' demeanor grows ever more sinister.

As great as all of the visual are, the characters and the story are the weakest part of the movie — although, on some levels, it does feel as if this is intentional. Plot-wise there are twists and turns, sure, but they'll seem obvious to most cinephiles. Also, it should be noted: This is not a horror movie. People looking for jump-scares should look elsewhere.

Instead, come for the support of one of our most creative filmmakers working today. The aforementioned issues could be a serious detriment to some, but in del Toro's hands, Crimson Peak feels mostly like an old movie of a bygone era — one that just so happens to boast modern effects and technology. Here, del Toro once again proves to be a skilled visual director with a great eye for the Gothic and macabre styles.