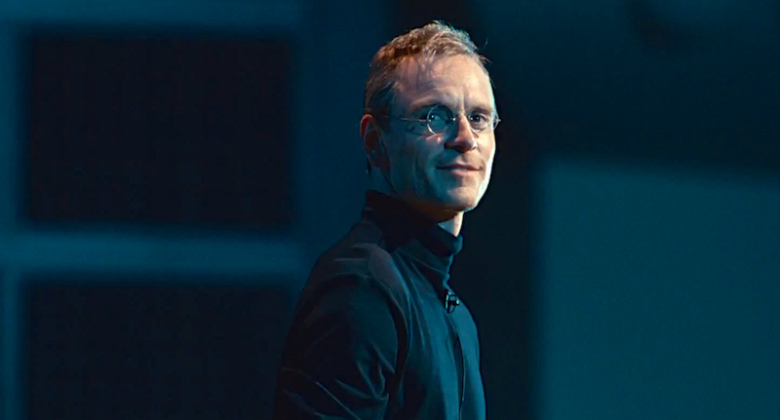 Great Dialogue And Great Acting Make Steve Jobs One Of The Year's Best.

Most biographical films settle for the CliffsNotes version of their subject's stories. The best of them hone in on a specific timeframe or throw out the playbook altogether. Steve Jobs, the new film from writer Aaron Sorkin and director Danny Boyle, does both.

And, in turn, it's one of the best movies of the year.

Instead of going from tumultuous childhood to success to untimely death, Steve Jobs turns the complex Apple co-founder's rise and fall into a backstage drama that takes place at three separate product launches — the Macintosh in 1984, NeXT in 1988 and the iMac in 1998.

Like The Social Network, Sorkin's other film about a tech genius who excelled at alienating his closest friends, this film has little to no interest in historical accuracy. Rather, it's more concerned with creating an emotionally engaging and often thrilling stage for actors at the top of their games. Michael Fassbender doesn't look much like Jobs at all, but he completely nails the perfectionism, arrogance and drive. Kate Winslet plays Joanna Hoffman, his “work wife,” and the only one who consistently calls him on his bullshit, not that it helps much.

For me, there's simply nothing better than great actors speaking Sorkin's dialogue. He gives both people in an argument a tremendous amount of ammunition. So when, say, co-founder Steve Wozniak (Seth Rogen) eviscerates Jobs, he roars back with a takedown of his own. And when Jobs and Apple CEO John Sculley (Jeff Daniels) get into it — and a flashback reveals that this isn't the first time they've had this particular spat — it's something akin to movie heaven.

Conversely, for those who find Sorkin's verbosity insufferable or who prefer to keep their mental picture of Steve Jobs crystal clear, this movie is one to avoid. You'll probably be either exhausted or disillusioned by it. Even so, you'll still find plenty to admire.

Danny Boyle tempers his typical hyper-kinetic style here, giving Steve Jobs the feel of a play — though not in a bad way. It's as if he gets out of the way for Sorkin's dialogue. Instead, it's his little touches that make the movie — the clever staging, the use of different film stocks, the terrific music choices. Each detail brings the movie to life.

While the film's happy ending feels a little forced, it's a necessary corrective. Otherwise, this would feel distinctly like a hatchet job. The title character denies paternity, belittles his staff and, in one perplexing scene, dunks his feet in a toilet. Aside from the last few minutes, Steve Jobs doesn't come off looking good. But everyone involved in making this movie most certainly does.