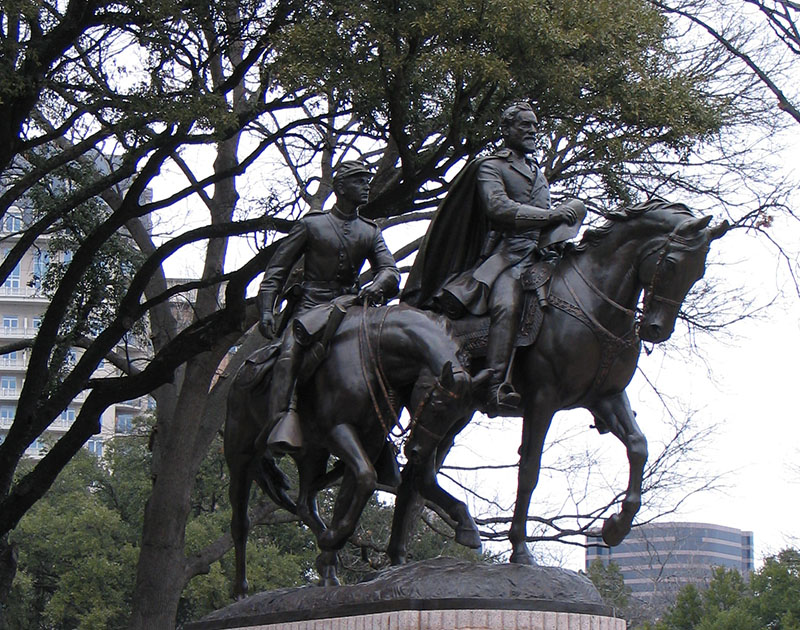 Dallas City Council Is Expected Next Week To Approve Paying More Than $450,000 For The September Removal Of The Robert E. Lee Statue From Oak Lawn Park.

We’re no construction experts or contractors here at Central Track. But, back in August when we did our own estimates on the costs associated with the removal of Confederate monuments, it sure seemed to us amateurs as if it shouldn’t have cost the city anywhere near the $600,000 its estimates said it would to remove the Robert E. Lee statue from Oak Lawn Park.

Well, it turns out that we were right — at least according to City of Dallas Equipment and Building Services Director Errick Thompson, who told the Dallas Morning News today that it would have cost far less than city’s initial estimates to remove the statue had it been taken down immediately after the September 6 vote to remove it passed and not been delayed as it was.

According to Thompson, it would likely have cost about half its initial estimate to remove the statue were it not for a doomed-to-fail lawsuit against the City of Dallas led by a white supremacist attorney. But that lawsuit, frivolous as it may have been, served its purpose in allowing Nazi and Confederate sympathizers to organize and plan more counter-protests, costing the city significantly more money than anticipated in hiring police officers to work onsite, overtime security and adding to those parties’ narrative that removing Confederate statues was a waste of taxpayer money.

Seems it very much was, thanks in no small part to those very groups’ concerted efforts. Their lawsuits and protests directly contributed to costs that quickly added up, thanks to the police presence was indeed likely needed as a ” pro-open carry” group decided to have a rally at the park to protest the statue’s removal just a few days after a vote determined that it would be taken down.

Only adding to those costs was the bizarre decision by the city to hire a crane from Houston to remove the state — because there are apparently no cranes in Dallas despite all the contractors currently redeveloping the hell out of the city? — and then watch on in horror as that crane was then involved in a deadly accident as it made its way up to Dallas.

In the end, it looks as if the city will have spent $450,000 on the removal of the Lee statue — a figure down from the initial (and overblown) $600,000 estimates, but still beefed up due to bureaucratic hold-ups. Next week, city council is expected to vote on approving the final $375,000 of associated Lee statue removal costs, since its initial vote only OK’d $85,000 in initial spending.

That spending will almost certainly pass — the initial vote basically cinched it, and that money won’t be coming from anywhere else — but, interestingly, the public won’t see a breakdown of how it was used, as the names of the contractors have been redacted for safety reasons and the council’s agenda doesn’t detail the specific administrative costs, according to the DMN.

But, troubling as that may be, it still doesn’t overshadow the fact that U.S. district judge Sidney Fitzwater’s decision to entertain a white supremacist’s agenda over the vote of our locally elected governing body — paired with that same governing body’s hesitation on affirming its stance — is going to cost the citizens of Dallas at least an extra couple of hundred thousands of dollars than it should’ve.