The Sausage King Of Dallas? He Still Reigns. 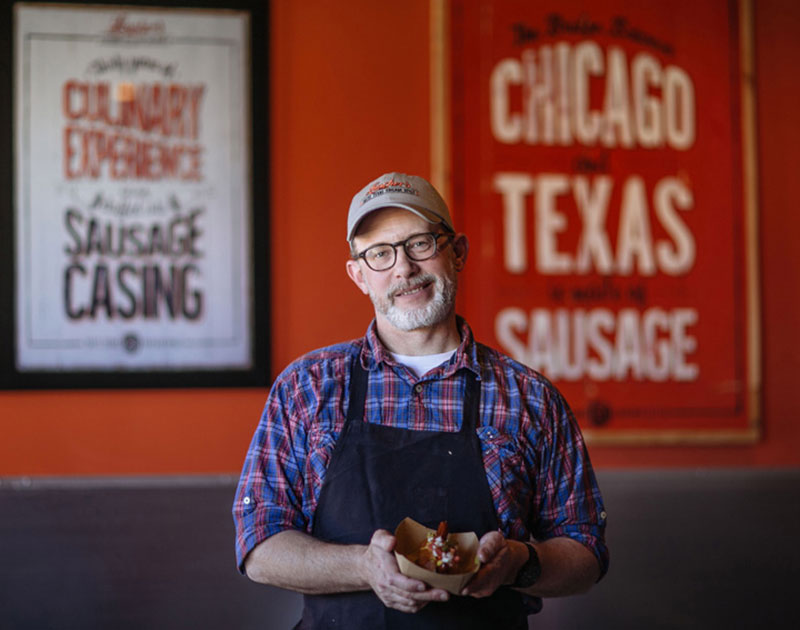 Brian Luscher’s Sausage Mecca In Deep Ellum May Have Closed, But He’s Still Kicking Ass At The Grape And His Sausages Are Still In Demand All Around Dallas.

The Grape is an institution here in Dallas. Which, in many ways, makes its executive chef and co-owner Brian Luscher a part of Dallas history himself — living history, that is, as his restaurant is a mainstay in a city that is far too often obsessed with the latest this and the hottest that.

And, to be sure, Luscher’s earned his place in Dallas. Boil things down and throw out all the trimmings and there’s an undeniable truth about Luscher and his food: It’s all so damn good.

At The Grape, there’s of course his burger. Everyone knows about that, yeah? It was named Texas Monthly‘s best burger in Texas back in 2009 and has deservedly received regular mention in every list since then.

Then there are his sausages. His Post Oak Red Hots, while no longer served out of his gone-but-not-forgotten Luscher’s Red Hots in Deep Ellum spot that closed in late 2016, are still very much alive and well, served at various restaurants around town.

We recently caught up with Luscher to discuss life after his Deep Ellum restaurant, how he’s forging forward at the 45-year-old The Grape (so often named by other area chefs as their “go-to” spot for dinner when asked) and what the future holds for his tasty sausages.

For the uninitiated, can you give everybody the backstory on The Grape and Brian Luscher? Where’d you come from? What’s your background? What made you decide to get in the restaurant biz?
I’m just a punk kid from the Greater Chicagoland Area. I cooked my way around the suburbs as a job, not as a career. My uncle and grandfather had a burger joint that I kind of grew up in. My uncle would hold me up to flip burgers on the flat top. I worked in supper clubs, pizza places, taverns, bars, hot dog joints — anywhere that would have me. I think the restaurant biz chose me. I never minded the hours. It had just the right mix of miscreants, artists and ne’er-do-wells. I got a buzz from the pace and the intensity. Whether it was washing dishes, cooking or bartending, I really fed off of the energy. I ended up working in Ohio then, eventually, for Cameron Mitchell. Soon after that, I was on my way to culinary school in New York.

What might folks not know about the restaurant and about your meats?
Well, as far as Luscher’s sausages go, we are actively working on taking them to the retail market very, very soon….

Ohhh shiiiiiiit! That’s great news! Are you eating sausages at home every night or do you take things in another direction?
At home, we keep it very simple. A nice piece of protein, green salad, green vegetable. Or a quick pasta like aglio e olio, maybe lemon shrimp. A decent glass of wine. Low-key usually is the best plan.

What’s your favorite place to eat out in Dallas?
We have a few fave places on rotation — usually friends’ places. We’re huge fans of MoMo’s Italian Kitchen on Royal. I get the carpaccio and fettuccine alla santalloro every damn time! I love when I find my go-to dish at a place. While still BYOB, they also recently added a nice little wine list.

What are you working on right now?
Right now, I’m digging the cold weather we’re having this winter. This might be my favorite time of year to create menus. When it’s actually chilly outside, the food really hits the spot. Duck confit, a stuffed pasta and a squash dish are currently on the drawing board. I like to throw a shank or a hock or an ol’ neckbone into the mix, too.

What’s next for The Grape and The Luschers?
What’s next? Maybe the ambitious pursuit of “next” is on hold — at least for a while. Right now, we’re just cooking. And we’re just eating. It works out really well.

Cover photo by Kathy Tran. Know another food business worth highlighting in this space? Message foodbitch! Like a good cover band, she takes requests.