How Melissa And Evan Tate of Tate Farms Grow, Maintain And Continuously Keep The Fun Alive Over At One Of The Last Family-Owned Farms In Rockwall County.

If you frequent the Deep Ellum oasis that is Double Wide, you might have accidentally bumped into a dude rocking a very impressive mustache and large cowboy hat. Or maybe you have stumbled out of an adorably tiny mobile photo booth often parked at events around town and sheepishly grinned at the nice woman in the cherry print pin-up dress standing outside the door.

The point is, you’ve probably seen Evan and Melissa Tate out and about.

Or maybe you haven’t? If so, that’s probably because they were off tending to their giant farm in Rockwall known as Tate Farms, one of the last family-owned ranches in Rockwall County. After all, there’s a lot to keep them busy on the sprawling 700-acre farm, which is serves as their home and that of the hundreds of cows and horses that roam its pastures.

In 2015, Tate Farms opened up a public event space under the name Summerfield at Tate Farms where they host weddings, community events, workshops, dinners, live music and, most recently, a drive-in theater area. No, farm life isn’t always so bad; turns out, it’s actually pretty fun when you’re working together to create a place that even hardcore city slickers like us find enticing.

We spoke with Evan and former regular CT contributor Melissa on balancing farm and city life, the beloved and not-so-beloved State Fair of Texas, celebrity horses and much more.

So for y’all, what’s it like balancing both the city slicker life so close to Dallas and farm life in Rockwall?
Evan: I know Melissa has an answer for that. For me, I enjoy it. You know, growing up outside of the Metroplex gave me some great opportunities. There’s really nothing better than going to a great restaurant or a great music venue and seeing a great show, then coming home to the farm. Being out in the country and not being in the middle of [the city] all the time but having the option to you know, go down and come home and be out of the country is great.

Melissa: For me, I was based in Mesquite and was there until Evan and I got married. From my front door, I was only 15 minutes away from Double Wide. So moving to the farm was an adjustment for me. You know, just being far from everything and kind of not being able to get an Uber at first or jump in my car and just meet somebody for a drink. But, I get up and walk t0 a window that overlooks hundreds of acres of horses and cows out in the pasture. So, I don’t have to see any to see anybody and I can be completely alone for however long I want to. It has definitely has its perks, but it did take me a little bit of time to get used to it.

That sounds like the best of both worlds, you know? A total luxury.
Evan: You know, there are people that would pay to go to a golf course and suffer through that for a couple of hours just to go outside. We can just walk out and into nature. Now we’re 30 minutes from Double Wide, which still isn’t terrible. I know it was an adjustment for Melissa to get used to the country.

People dream of owning land for that reason because it’s so nice to just have a piece of the earth that is yours and yours alone.
Evan: That’s kind of where we’re at now with the other stuff — you know, the farm was not sustainable with just the cattle business. There wasn’t enough money for our families to make living wages in just the cattle business, so we diversified in the horse business. And then again, to have another level of diversity, we started having the event businesses and that’s where Melissa came in.

Melissa: I’ve done Photo Wagon for years, and wrote for Central Track and D Magazine! [Laughs.] So Evan and I combining our two skill sets is sort of where we’re at right now. You know, both of us sit down and have an idea and we have to do it. 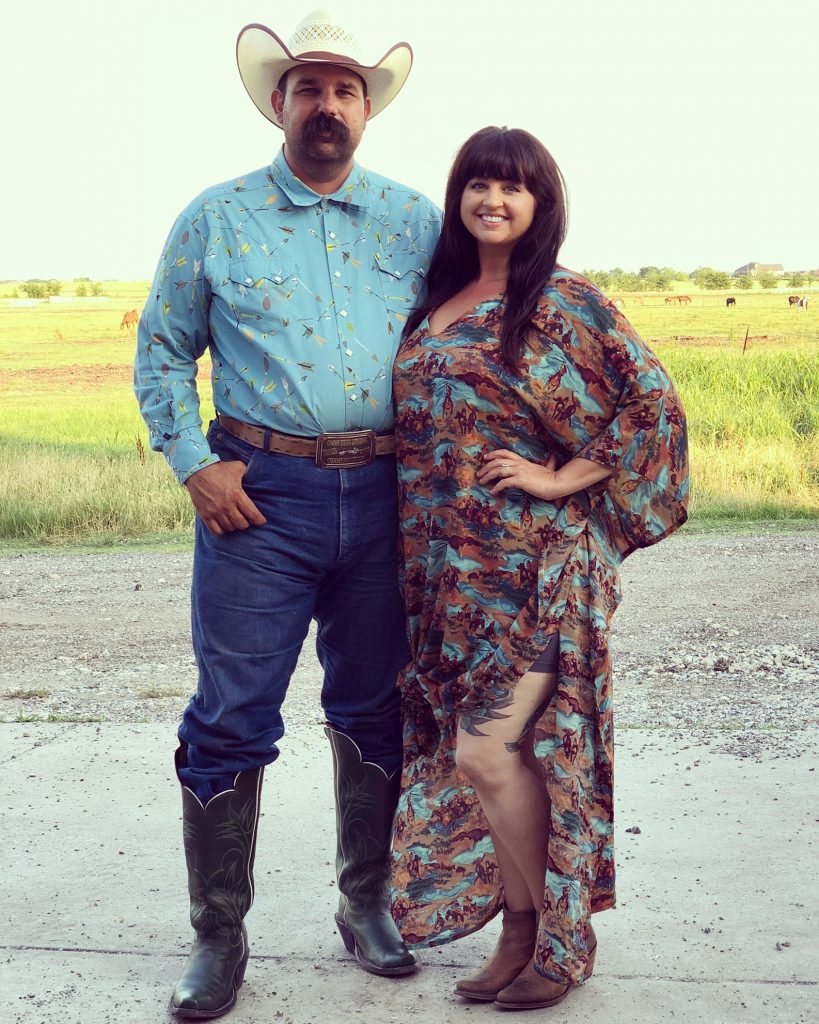 The secret to a power couple? Coordination — and communication!

That’s a total power couple dynamic right there.
Melissa: There’s a lot of people who have great ideas and they can’t carry it from idea to reality. But between the two of us, what we’ve been able to do is turn our ideas into reality. That’s what we do with the event business.

You guys are really taking Tate Farms to the next level by turning it into a giant open event space with entertainment amenities like Photo Wagon, drive-in movie screenings and wedding spaces. Y’all are able to kind of create your own space and own world.
Evan: That’s kind of what my mom was. She was a host of parties and big events and was well known for it. She was in the catering business and Nathan Tate, one of my brothers, has three restaurants. So we have that background of hosting events and having that kind of interaction. Because we have the facility in Rockwall, it’s one of those things that, to me, I think it makes it more authentic instead of somebody buying some land and trying to make it look rustic. Here, it’s real. Day in and day out, we’re farming and ranching.

Of the full-time staff at Central Track, I’m probably the only one that is very vocal about my love for the State Fair of Texas. From what I understand, y’all are big fans of the State Fair of Texas, too! The cancellation this year was a bummer, huh?
Evan: Well, I’m the chairman of the State Fair Rodeo Committee. Rodeos had gone away from the state fair for a long time and we were in the process of bringing it back to two rodeos so far. There were state fair rodeos, but they were before the fair and inside of the coliseum. This year, we were planning on having the first “during the fair” rodeo since the ’80s, and we lost that opportunity.

But when you think of, you know, 150,000 people coming together [each] day for 24 days in a row — that’s a lot.  We actually went to the drive-thru experience. It wasn’t the State Fair of Texas as we knew it, but it was the 2020 version. We’re gonna be right there on opening day next year. Whatever opening day looks like — we’re gonna be there again.

Melissa: Of course it was sad to cancel, but I just can’t imagine, you know, trying to keep all those people safe. At our place, we can control what people do and we can only let a certain amount of people in. So I think [the cancellation] was the right thing for sure. 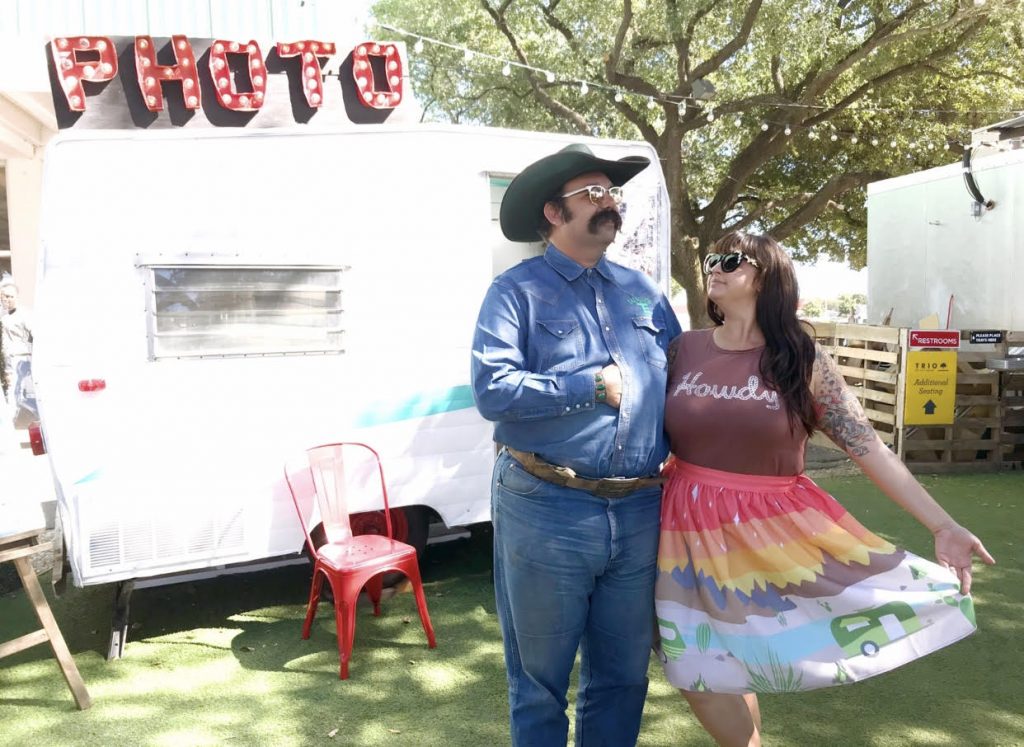 There’s certain magic the State Fair of Texas has, you know?
Evan: You know, there are people that will talk bad about the State Fair of Texas. But look at the positive things the fair has done and continues to do. The thing about the fair itself, it tends to be expensive if you don’t do it right. It can be, you know, tiring if you don’t do it right. But we can go there and we can see every type of person the Dallas/Fort Worth area has to offer — that Texas has to offer — all at the same place, having the same level of fun, doing the same thing, spending time together and just enjoying being there. You can see the joy of watching people on the Midway or see folks get their first Fletcher’s corny dog of the year or watch people pose with Big Tex for selfies.

You know, Pete Freedman has a standing invitation to go to the State Fair of Texas with Melissa and me, but he hasn’t taken us up on it because he’d rather complain about it. [Laughs.] But I know that he went with Scott Beggs and some other folks and he had a good time. He just won’t admit it.

My question for you, Melissa, is what is the craziest thing that’s happened inside of a Photo Wagon?
Melissa: I don’t know what you’re allowed to say, but probably the wildest thing that happened was an actual sex act in the Photo Wagon.

Evan: See, in a situation like that, when the printer runs out of paper, it stores the photos and then it prints everything out. Once you reload the printer, then all the stored images get to printing out. So, they’re standing there by the trailer, anxiously waiting for these pictures. As soon as they come out, they snatch them and take them. What they didn’t realize is also the computer captures a digital image in storage.

Melissa: It wasn’t like she rudely snatched the photos or anything, but I think she was trying to just like play it off. She snatches the photos and they get out of there. And I’m like, ‘oh, what was that?’ Like, now I have to see what that was.

One last question: A few years ago, David Letterman gifted Conan O’Brien a horse that now resides at Tate Farms. The horse, now named Tuwa, was continuously regifted and said to be difficult to ride due to a suspected back injury. Are there any updates on Tuwa’s condition as of now?
Evan: Tuwa is doing great. He’s been ridden by the owner. All of the work we’ve done with him has brought him around to not just being safe, but actually being manageable and enjoyable to work with. So, you know, we’re beyond the “he’s not gonna try to kill anybody” thing, but have moved onto Tuwa actively trying to be good.