[Q&A] Confetti Eddie On His Career And Solo Show. 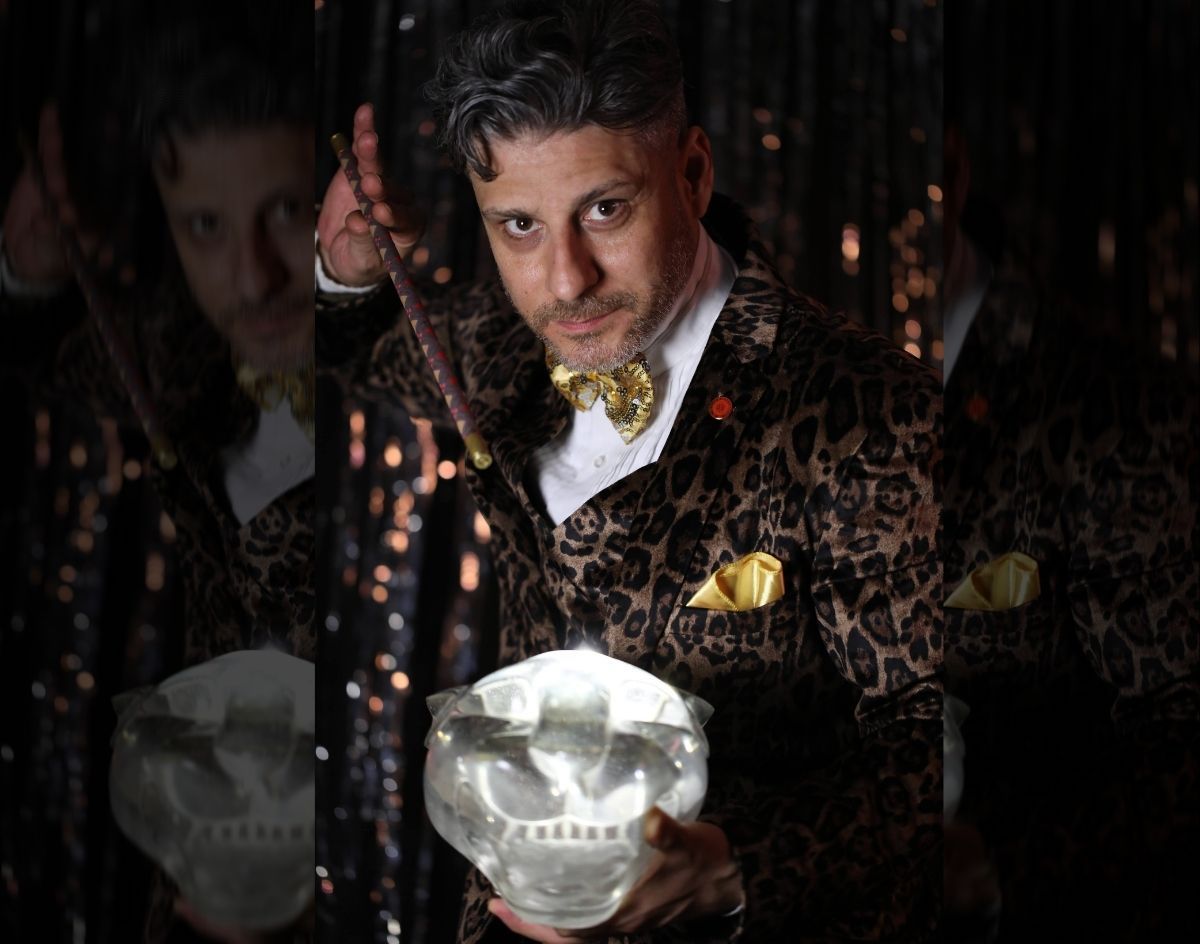 While The World Seems To Have Never-Ending Tricks Up Its Sleeve, This Dallas Performer Won’t Let Anything Diminish His Magic.

In May of 2020 Edward Ruiz, better known as Confetti Eddie, closed his magic parlor. He had occupied the space for 26 years, initially as an art gallery but later transitioning it to a venue for magic shows in 2007. A one-of-a-kind space, the loss made Deep Ellum noticeably less…well, magical.

A staple performer and figure in the community, Ruiz was deserving of one of Deep Ellum 100’s grants. He’s been putting that grant to use by building up his act while facing the challenges brought on by the loss of a shopfront.

This month, Ruiz is performing in-person to a public crowd for the first time since August of 2021. His first-ever solo show, “Confetti Eddie and the Mystery of the Two Headed Jaguar” will run on January 23 and January 30 at Four Day Weekend in Lower Greenville.

We spoke to Ruiz about what his show entails, as well as the other things he’s been up to, magic school and wanting to look like a wizard.

What have you been up to lately?

You know, the pandemic, so I’m in this new place in my life now. With that money, [the Deep Ellum 100 grant] I took my show virtual. I set up a home studio and started doing my magic online. It helped me feel like I still had a place to perform because I took a big hit when I lost my magic parlor. I felt like my creative space had been taken away from me. So it was nice to get the support from the Deep Ellum 100 and be able to put together something.

What does a virtual magic show look like and how have you had to adapt your craft during all this?

That was a challenge. All magicians had to learn how to do no-touch magic. There’s so many great magicians from the past that have already been doing this like David Copperfield, Jim Steinmeyer — these guys have all been doing magic on TV, where you touch the screen and that kind of stuff. So everybody just hit the books and we started pulling out all that old stuff like mentalism. It a different genre. Magic is a big house with many rooms. There’s a style for everybody.

I ended up placing in the top 100 of this worldwide, cyber magic competition.  All of a sudden I’m appearing on like, Texas Today —  I did a little segment for them on their on their NBC show, so all of a sudden, I’m like, “Oh, wow, I’m virtual, I’m all over the place. I don’t need the magic parlor anymore. I could go to these other places.” And that’s how I get my magic out there.

[During the pandemic] I just wanted to get better at writing and just, learning, so I put myself back in a student position. I returned to Dallas College and went ahead and enrolled in the only magic school in the world, The Magic & Mystery School. I’ve been learning so much.

I haven’t been doing a whole lot of in-person stuff. But during my time off, it gave me a chance to sort of like, go back to my roots, relearn about myself and who I am and what I like to perform.

I actually just auditioned for Penn & Teller: Fool Us. I created this original act. Fingers crossed they’ll consider it.

Tell me a little bit more about that opportunity.

When I was doing the naughty magic show, I was getting a lot of popularity for it. A casting director approached me about being on America’s Got Talent. So I went through that process and kind of sped through the front of the line, getting pretty far behind the scenes. I never made it to an audition recorded on stage because they couldn’t figure out if they wanted to have me. They were like, “well, we don’t know if we can show your butt on TV.” It really got down to whether or not they can let let the audience see my butt.

Back to the magic school, what does a typical day of that look like?

Well, first off, I had to be initiated as a member, so there’s only so much I can tell you. I did take the obligation of the mage, and that’s my oath on not to give up secrets and to use magic in good faith.

But we meet online and they teach us magic. They also bring in guests to speak to us and inspire us. Every week, we meet a new magician, someone who’s been on Penn & Teller, or another member of the Society of American Magicians, or David Copperfield himself. Everyone’s show is shut down right now, so everyone is in the same same situation, including the big names. It’s just really cool that we’re able to connect with all these big name people out there through the school. We’re staying connected no matter our caliber of expertise.

So you’re building a nice community virtually. Is there much of a magic scene in Dallas?

Yes and no. It’s not like it has a Deep Ellum of magic. We have to mix our magic in with things that people go out and do already. We’re performing at comedy clubs, and we’re doing the burlesque stuff. We’re doing that so that we can show y’all that magic is solid. It can hang in there with all the other performing arts.

At the same time, yes, we want to come together and have our own venue or our own place so that we can celebrate just magic on its own, which we don’t have in Dallas.

Is a magic venue something you see yourself helping create in the future?

Yeah, I talk about it all the time. I’m just looking for people that want to be the bar part or the restaurant parts. And let us do the entertainment. We really need those that are driven and have the same vision, which is that it’s all about magic. Because it does work, there’s already models out there in different cities. We just need Dallas and people here to realize that magic is a way to bring people together

What can you tell us about your new show without revealing too much?

With the pandemic, there was a lot of internal reflection. My show, “The Mystery of the Two-Headed Jaguar,” is basically about  Confetti Eddie’s origins — who is Confetti Eddie, but also who is the artist behind Confetti Eddie, Edward Ruiz? I talk a little bit about my roots, where I come from and how I came to be here, traveling to Spain and Mexico City and retracing my roots. So I have all of that personal stuff mixed into the story that I wrote about a Mayan prince, who’s lost in the jungle and has to learn how to find his way. And during that process, he meets a magical two-headed jaguar and these realizations come to light and he is able to find his way home. I use magic to tell the story. That’s that’s how I communicate to the audience all the the story elements — through magic.

Is this story-telling format something you hope to continue with in future shows?

For sure. I think the best stories are our own personal stories because they have a way to connect with everyone. It’s also growth for me because as a young magician, a lot of times, we just do the tricks and perform the moves. But with storytelling, we use magic to emphasize a real, honest story and engage an audience.

When did you first start getting into magic?

Early. Since I was a kid, really. It was something that I had always loved. Even in my other things like my art and my theater career, there was always a little magic idea on the side.

And it was it was something I thought that would be great for when I was an old person. I remember looking at all those magic books, and the magicians were always like, old, wizard-looking guys and I was like, “Yeah, I want to be an old guy like that. I want to be an old man magician.”