[Photos] The Sights Of Dentonpalooza. 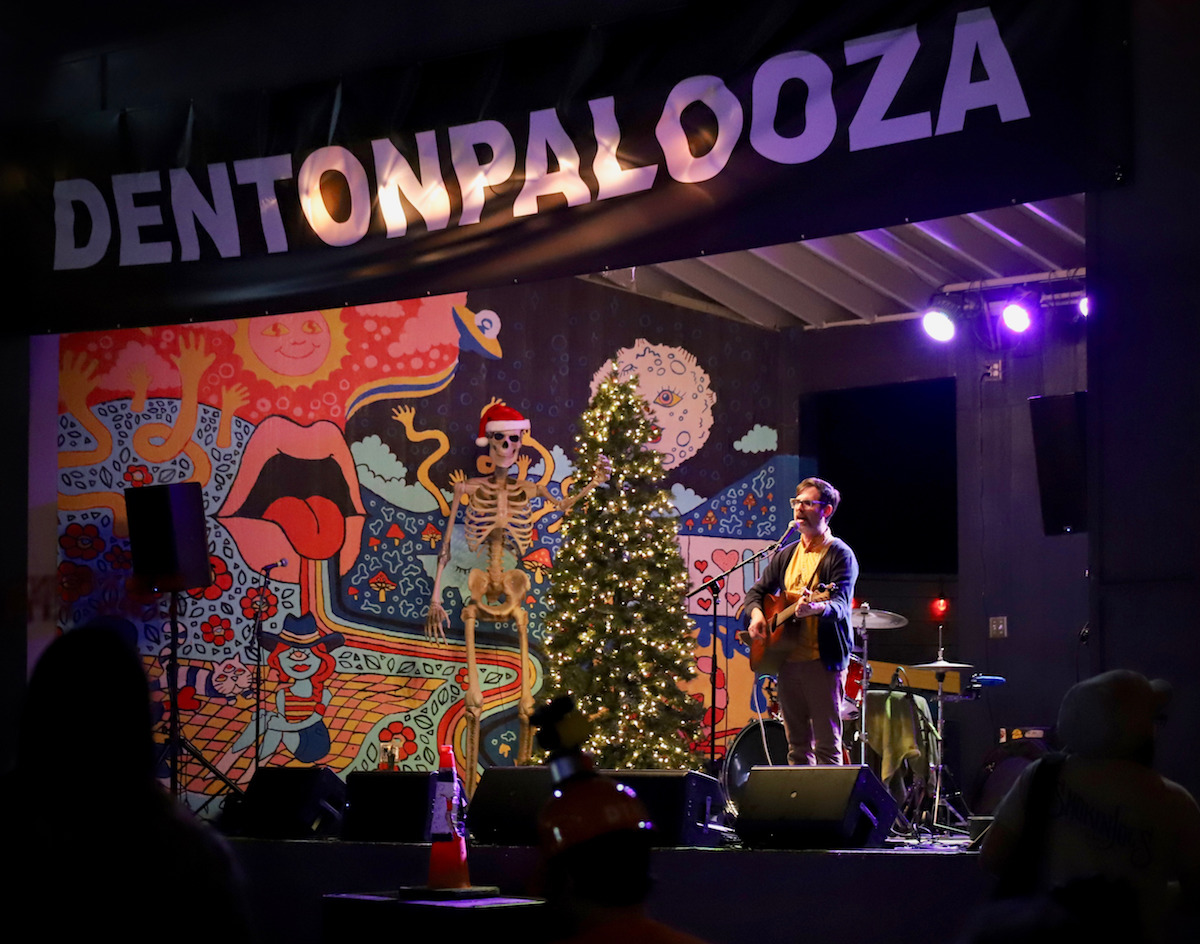 With Guests Like Baby Goats, The Kroger Rat, Beat Machine Dude And Spider-Man, This Fest Successfully Celebrated All Things Denton.

The Little D is has built a reputation of being wonderfully weird, so we were delighted to see that Dentonpalooza actually came into fruition at Rubber Gloves Rehersal Studios last Friday.

Featuring local figures, vendors, musicians and urban legends, the festival delivered on its promises for a good time and effectively showcased what makes Denton, Denton — all while benefiting some good causes.

Event organizer Joey Liechty acted as MC for the day, taking us on the journey through interviews, activities, musical performances and other forms of Denton-esque entertainment from 2 p.m into the wee hours of 1 a.m. At one point during the festival, he commented that it probably isn’t going to be a reoccurring thing, but Denton never relents, so it might be a RIP to Liechty’s sanity if the masses demand Dentonpalooza 2.0 when ’22 rolls around.

This Central Track editor unfortunately couldn’t commit to the 11 hours of bliss and bafoonery, so these photos are only a fraction of what went down. But Detonites, where were you if not at Rubber Gloves, huh? After all you know what they say — be there or be (Denton) square. 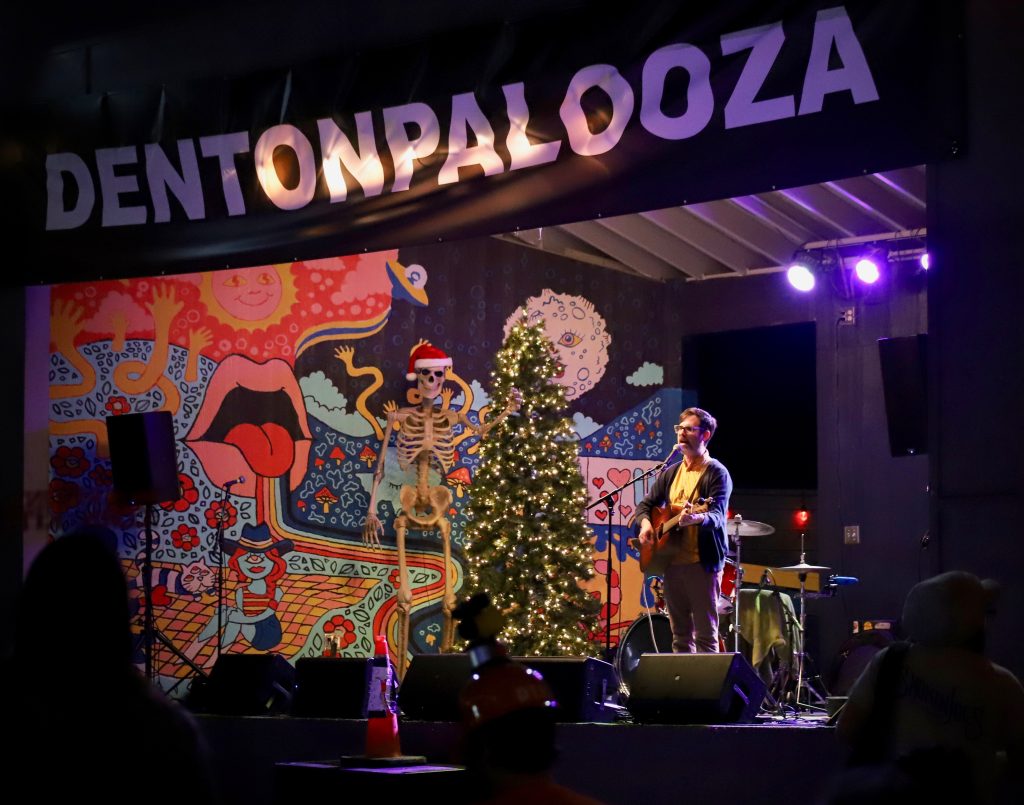 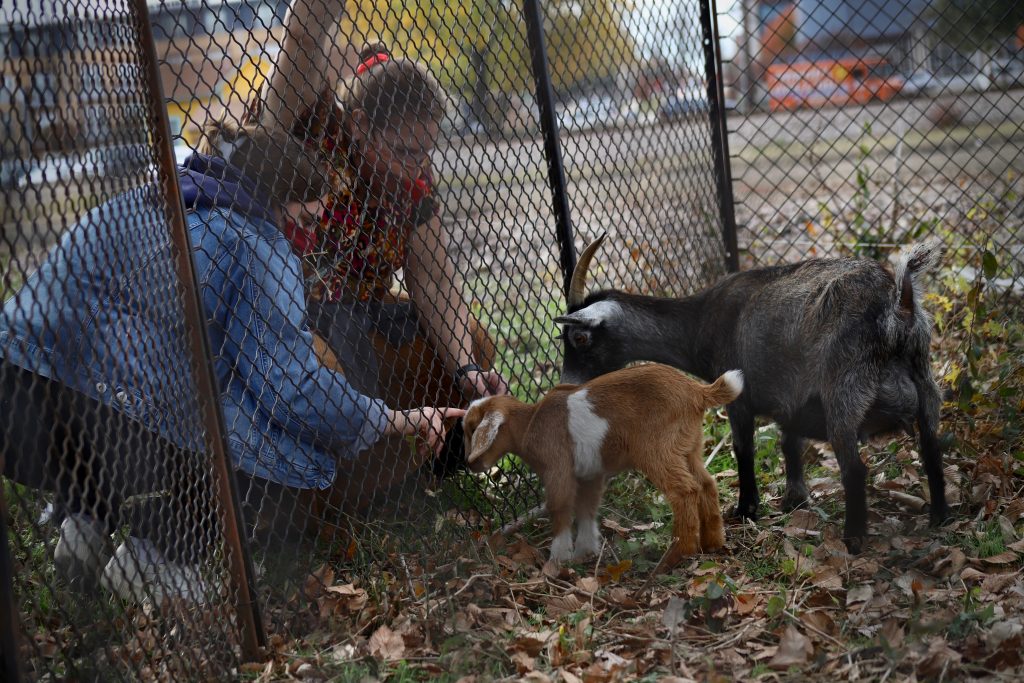 Inspired by the urban legend of Goatman’s Bridge, Dentonites were treated to a goat pen with baby goats. 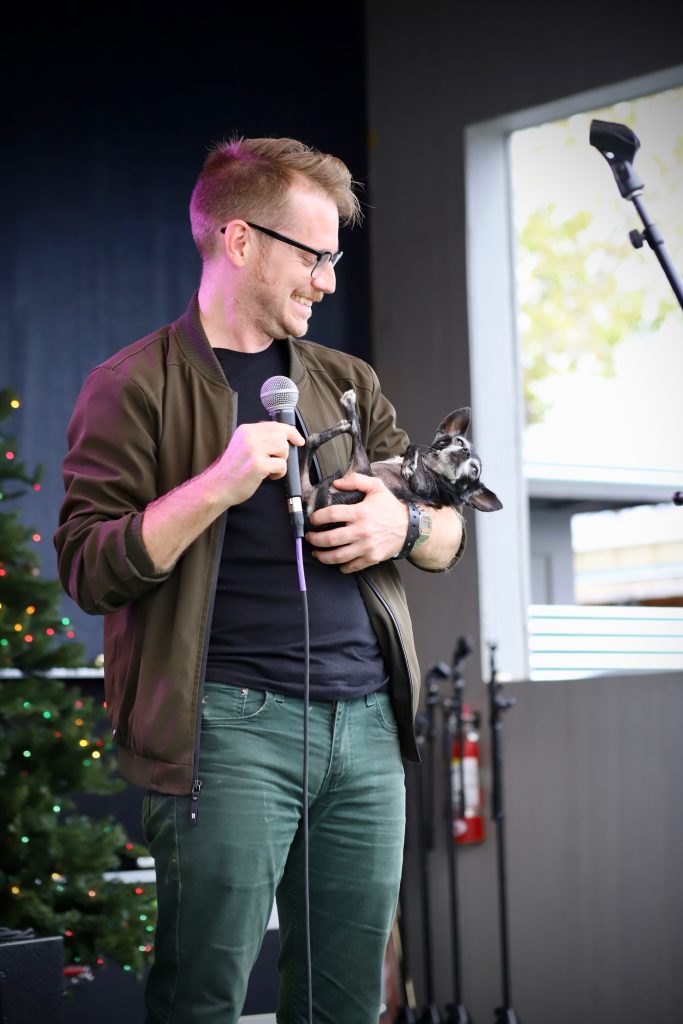 Rosie, the small, elderly pup who can be found at Recycled Books on the Square — and harnesses psychic powers — was one of the subjects to be interviewed on stage. Her owner Axel, pictured here, did the majority of the talking. 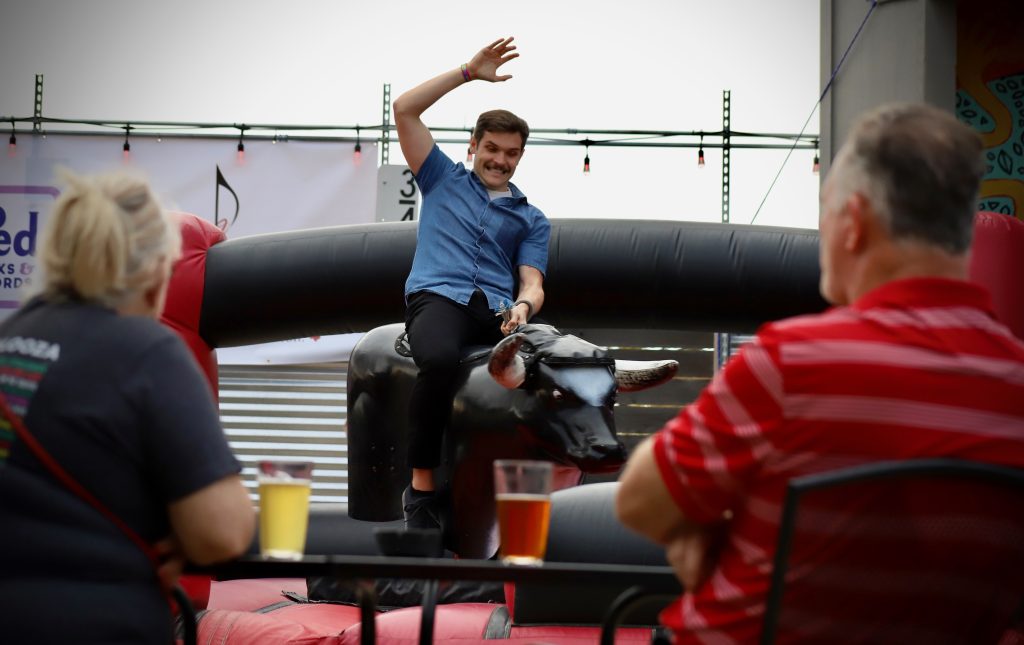 One of the many attractions at the festival was a mechanical bull. 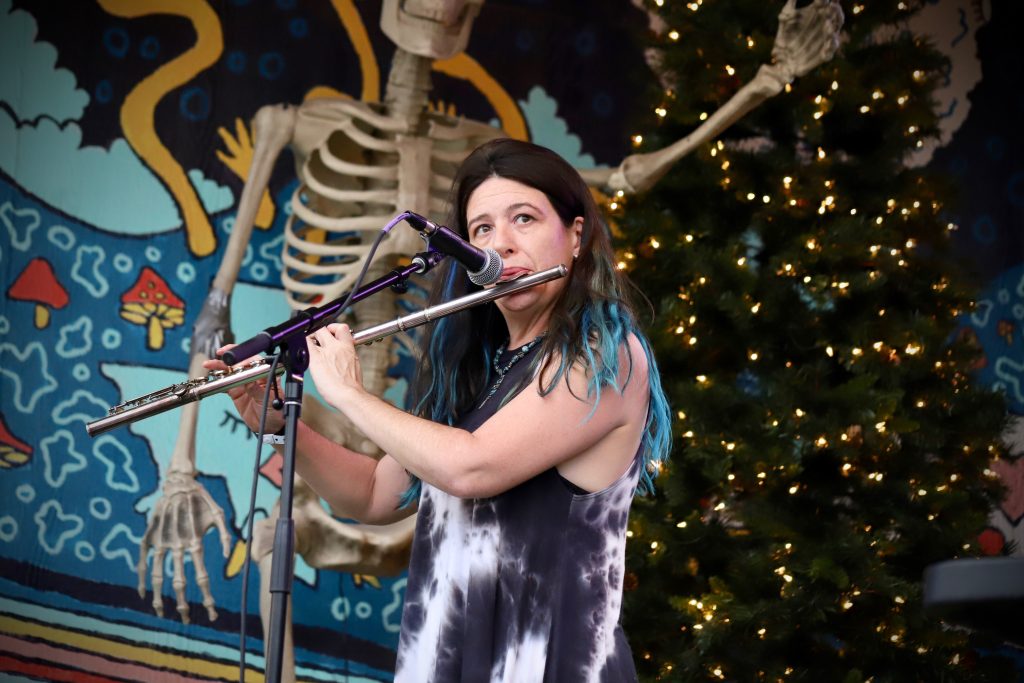 “Psychedelic Flute Player,” as the community has dubbed her, performs. 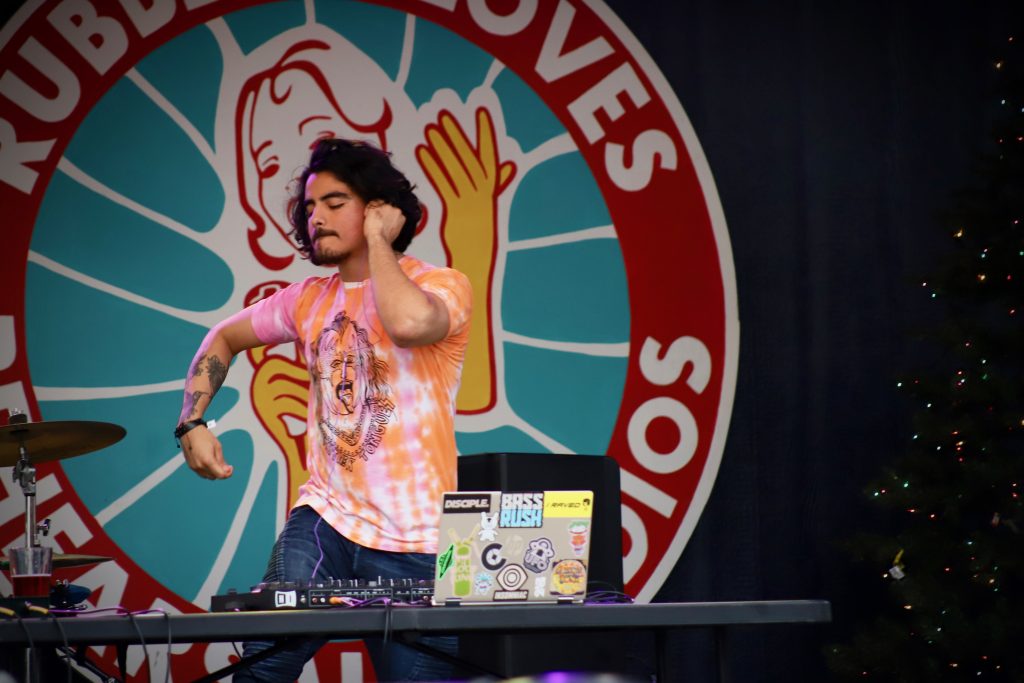 “DJ On The Square” — aptly named for being known to DJ on the Square, also performed. 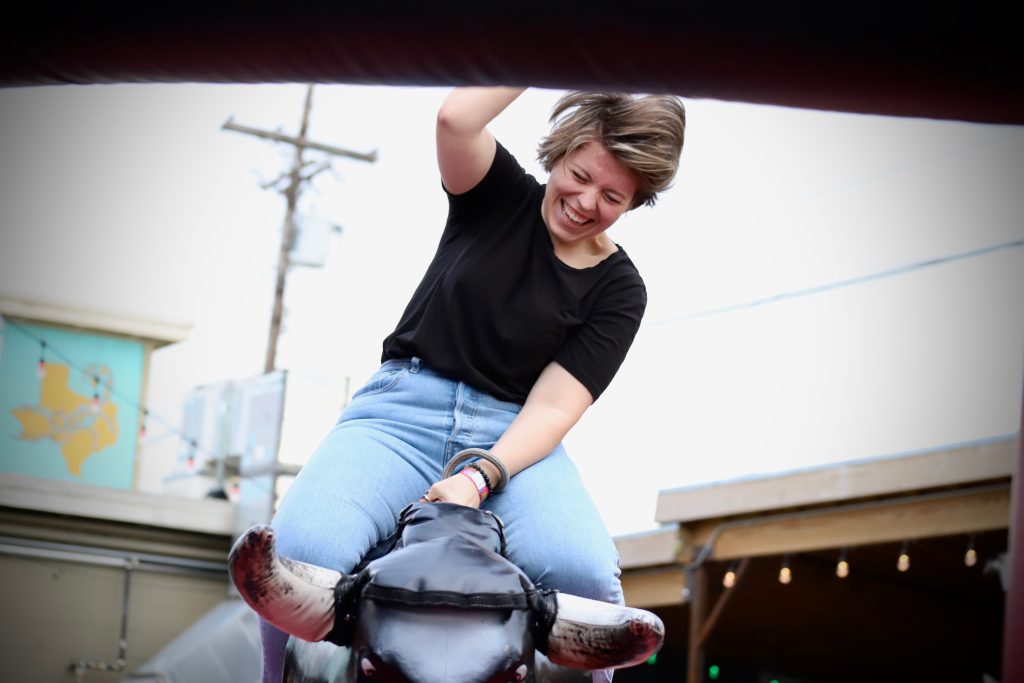 Another Dentonite taking advantage of the mechanical bull. 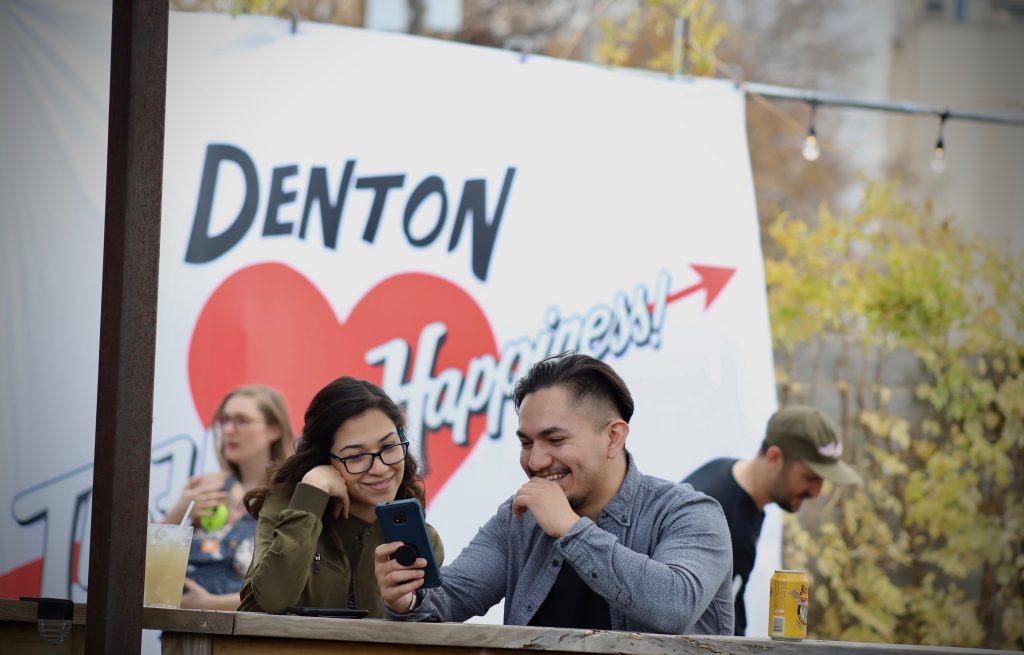 While the film doesn’t take place in Denton, Texas, the “Denton — Home of Happiness” sign featured in ‘The Rocky Horror Picture Show’ has become an iconic symbol for the town. 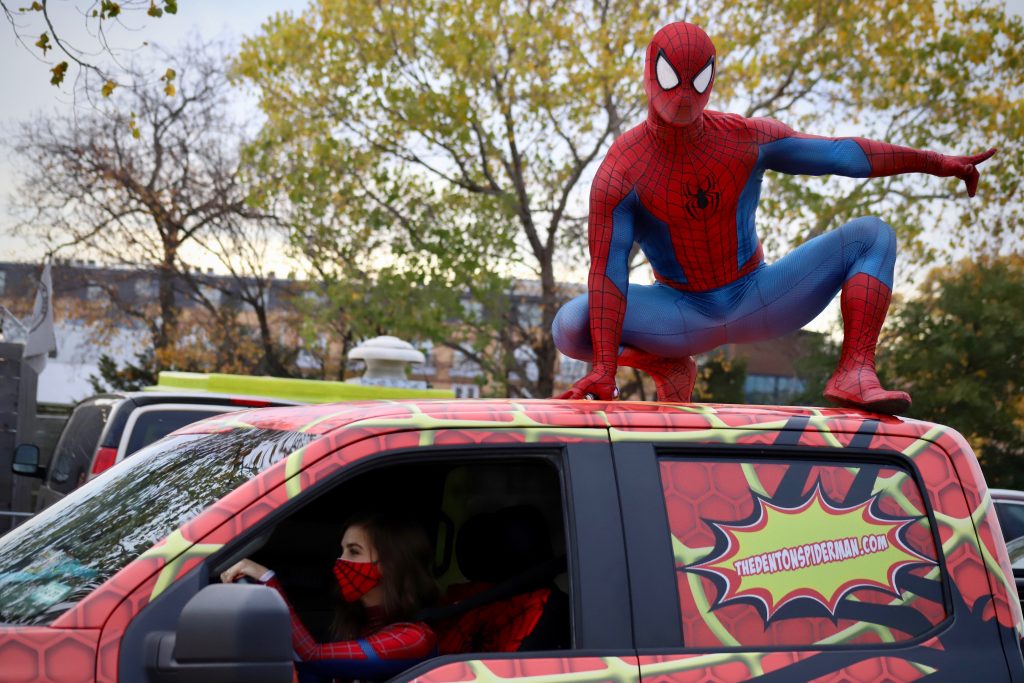 Denton Spiderman arrives to Rubber Gloves Rehearsal Studios on the roof of his truck. 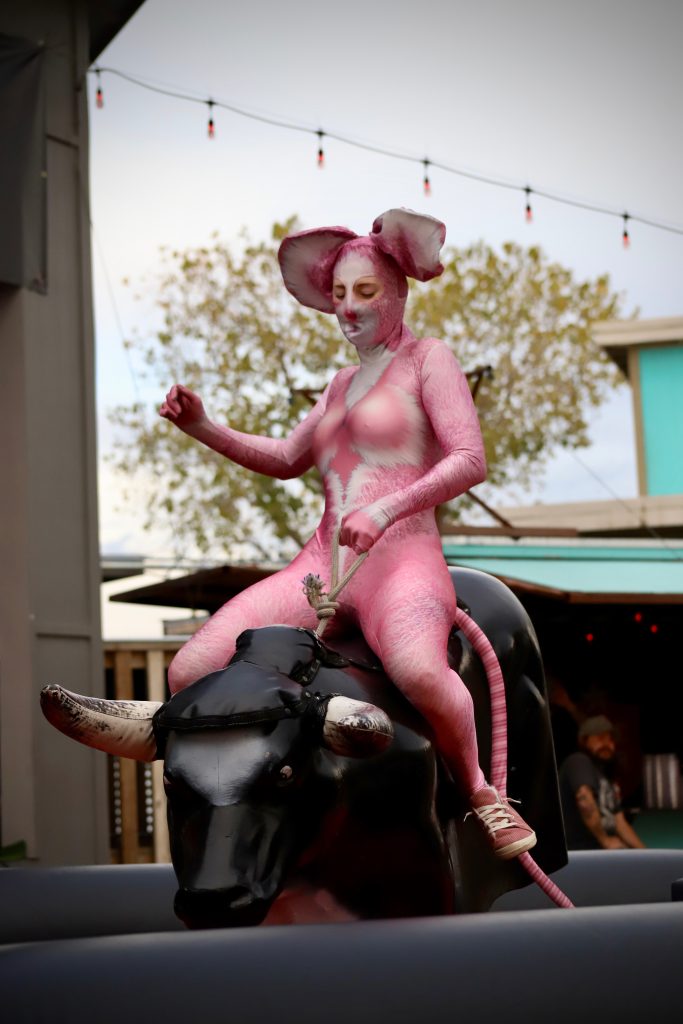 The infamous Kroger rat made an appearance — and rode the bull. 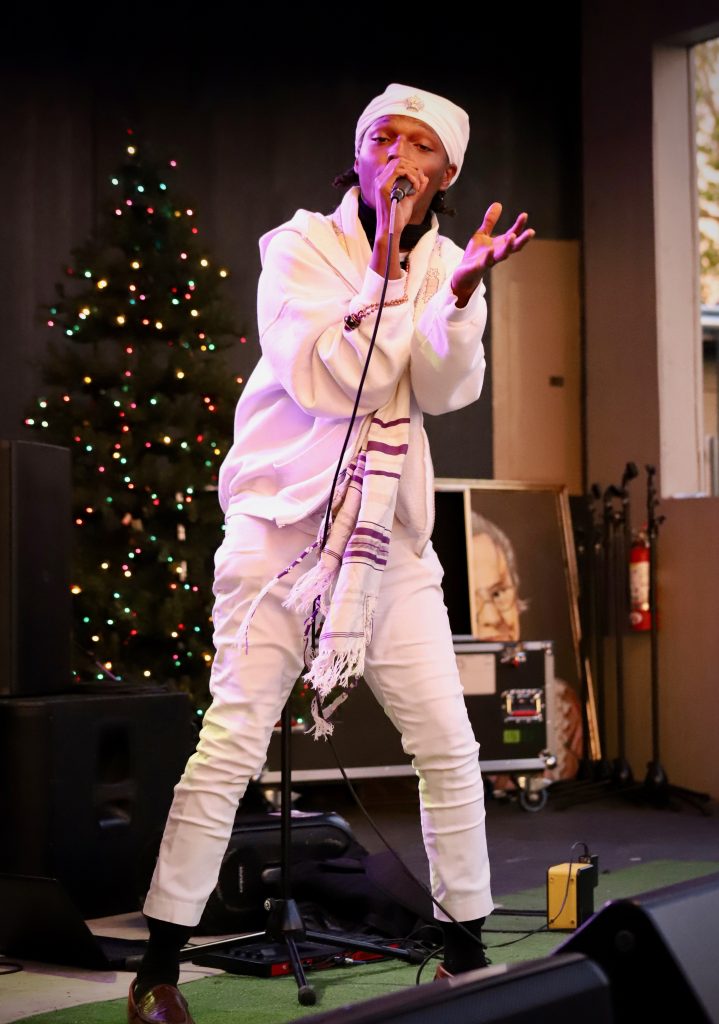 Another icon of the Square, Beat Machine Dude, raps during a portion of his set. 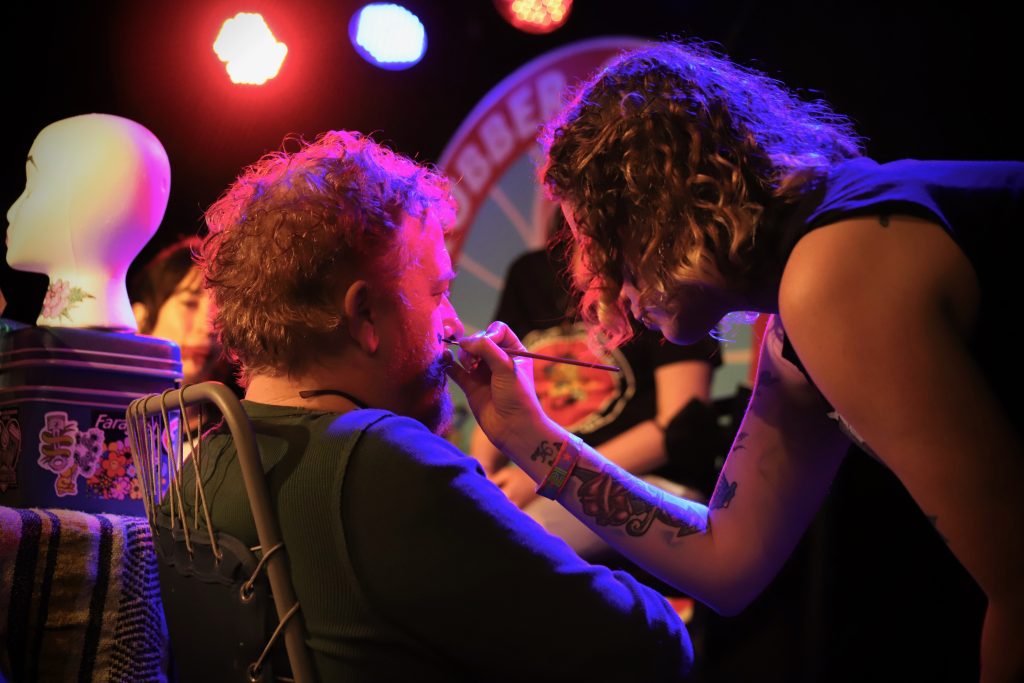 The festival hosted many local vendors, like So Good Vegan, Skeleton Key Crafts, Art by Channing Smith, among others. 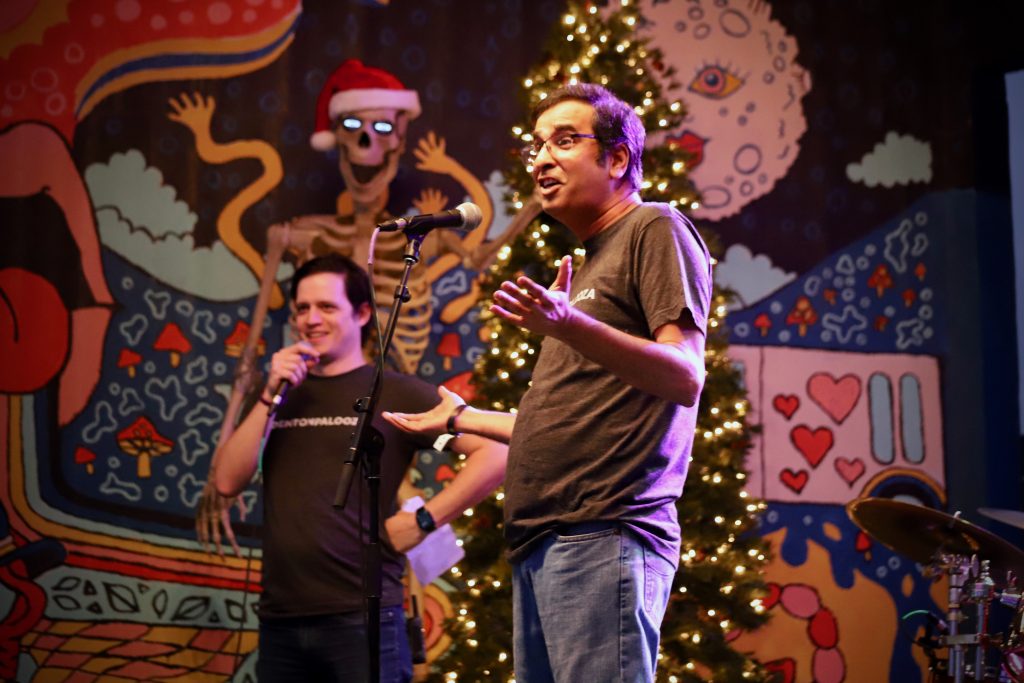 Shaun Tapia, co-owner of Midway Mart, being interviewed on stage by Liechty. 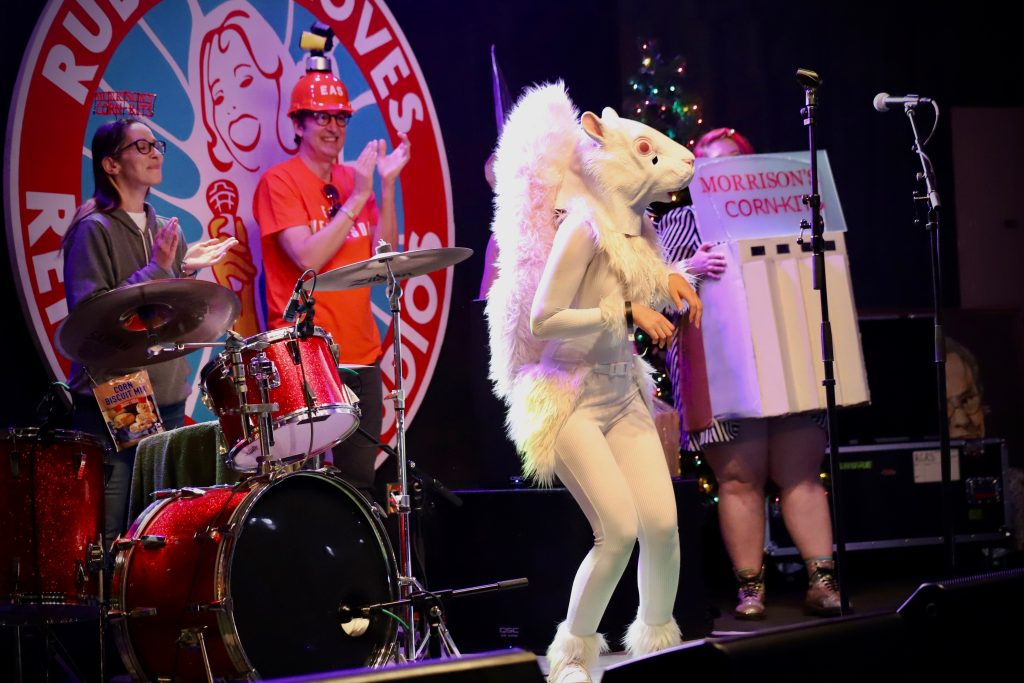 Contestants of one of the rounds of the Rose Costumes costumes contest –with two Morrison’s Corn-Kits, the first Wednesday test siren and Lucky, the albino squirrel from UNT. Behind Lucky is Kroger rat. 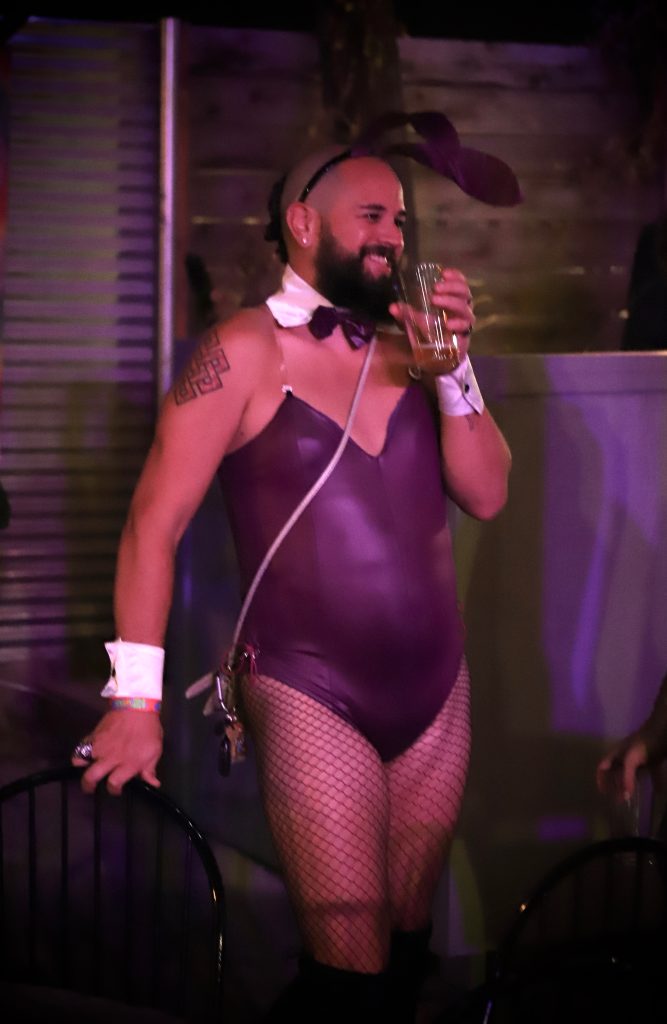 A festival-goer mingles in the crowd. 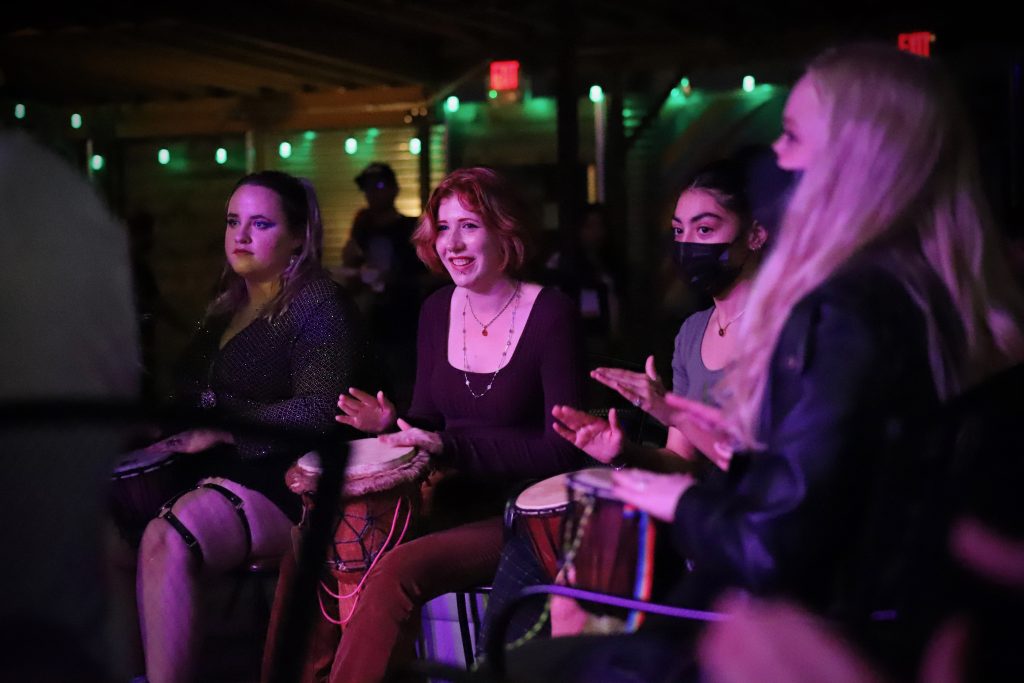 Dentonites join in on a drum circle, which is a weekend staple outside the courthouse on the Square. 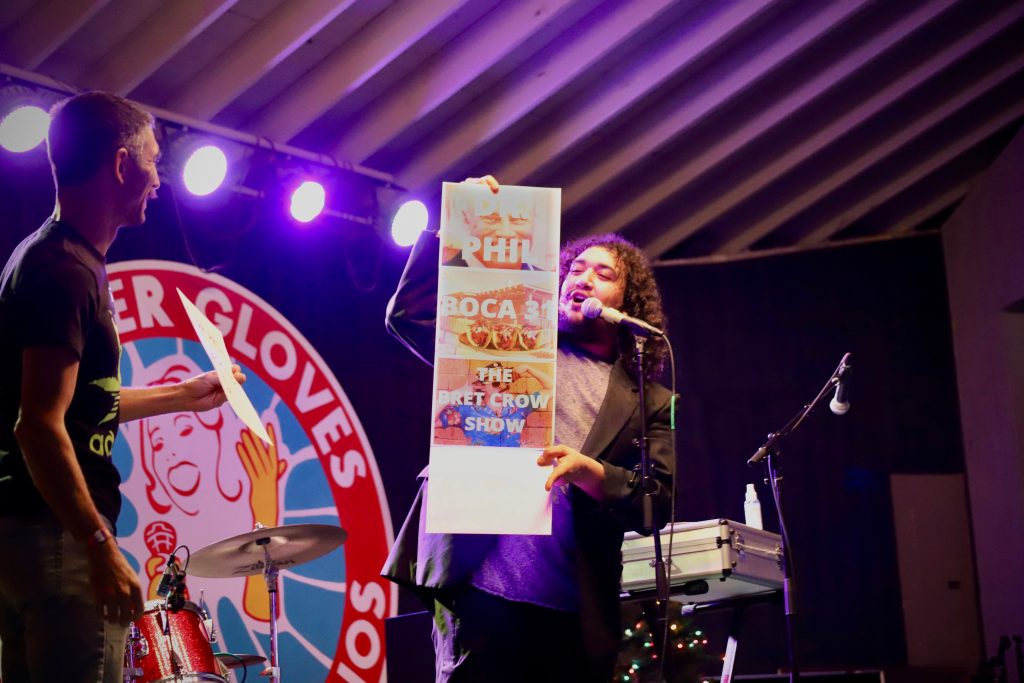 Magician Ritchy Flow performs his ending trick with a volunteer from the audience. He holds up a print-out with Dr. Phil, Boca 31 and The Bret Crow Show — all Denton staples. 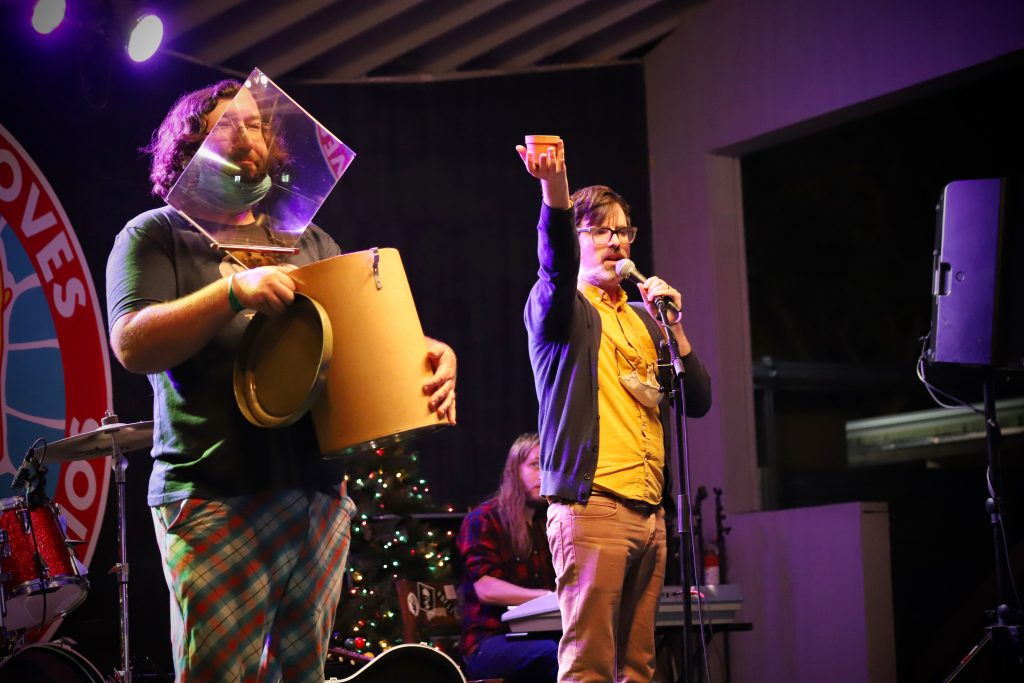 The Time Capsule Exhumers put together a time capsule to be opened up next year — if Dentonpalooza returns — following a musical peformance by Fishboy’s Eric Michener. Here, Michener holds up a planter to represent a UNT student who goes to class with a potted plant on his head. 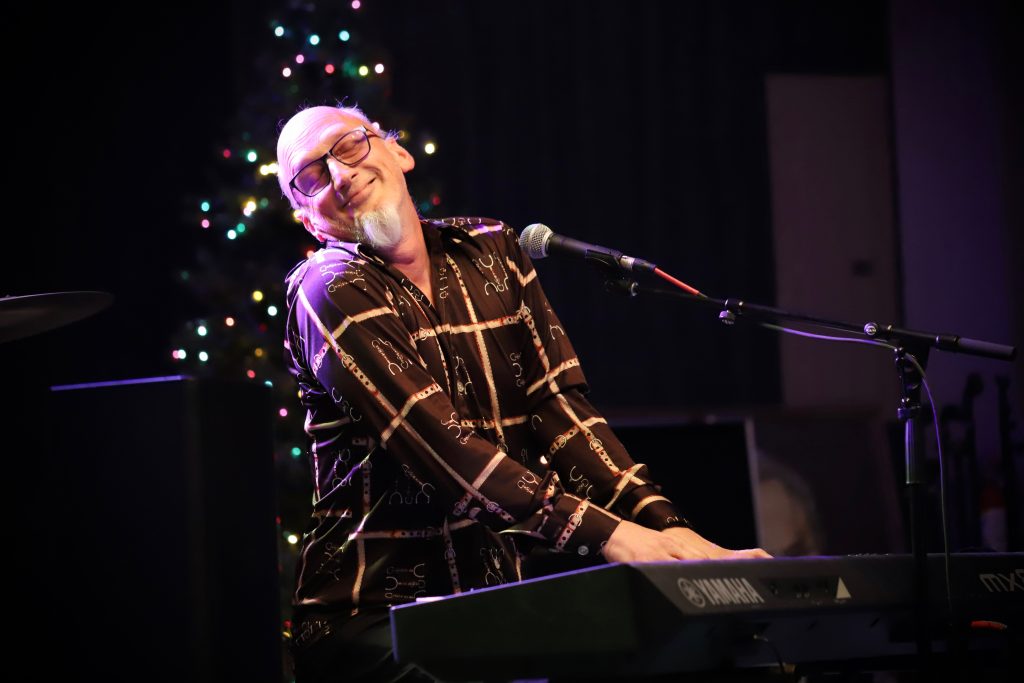 Paul Slavens performs improvised songs based on audience suggestions. “This is one of the stupidest things I’ve ever heard of and I am in full compliance,” he says about Dentonpalooza. 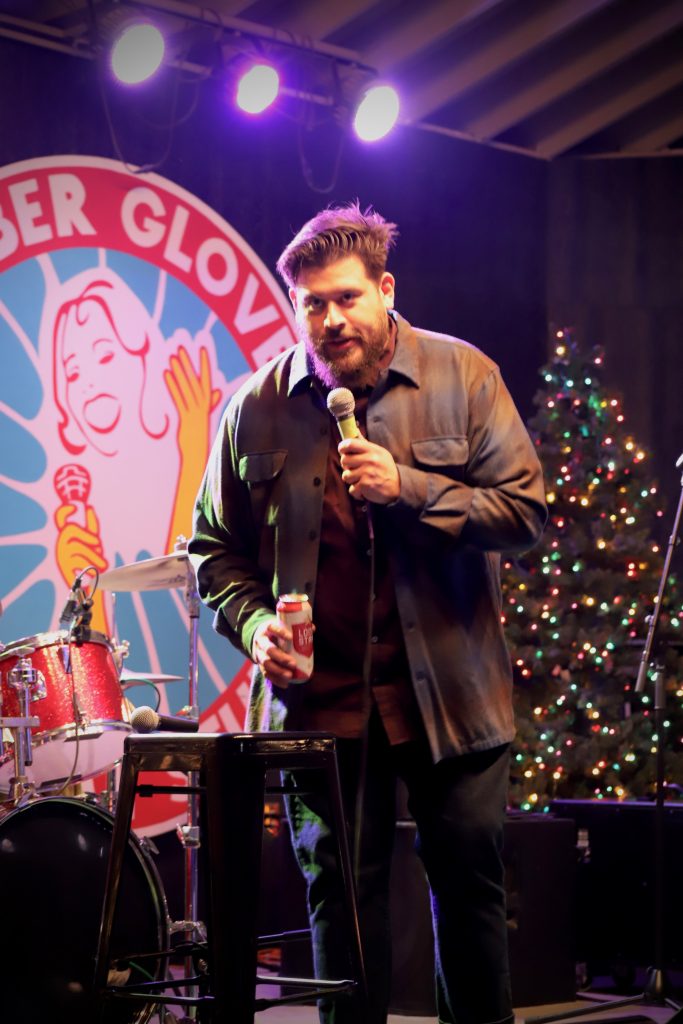 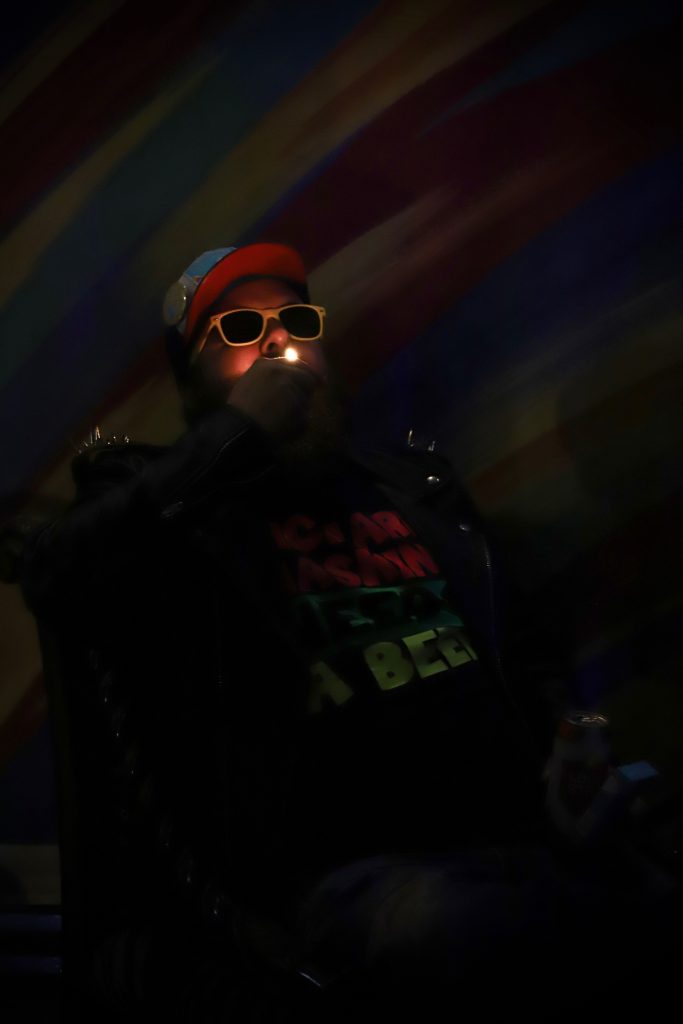 Richard Haskins of  Wee-Beasties lights a cigarette. The punk rock band performed later in the night.