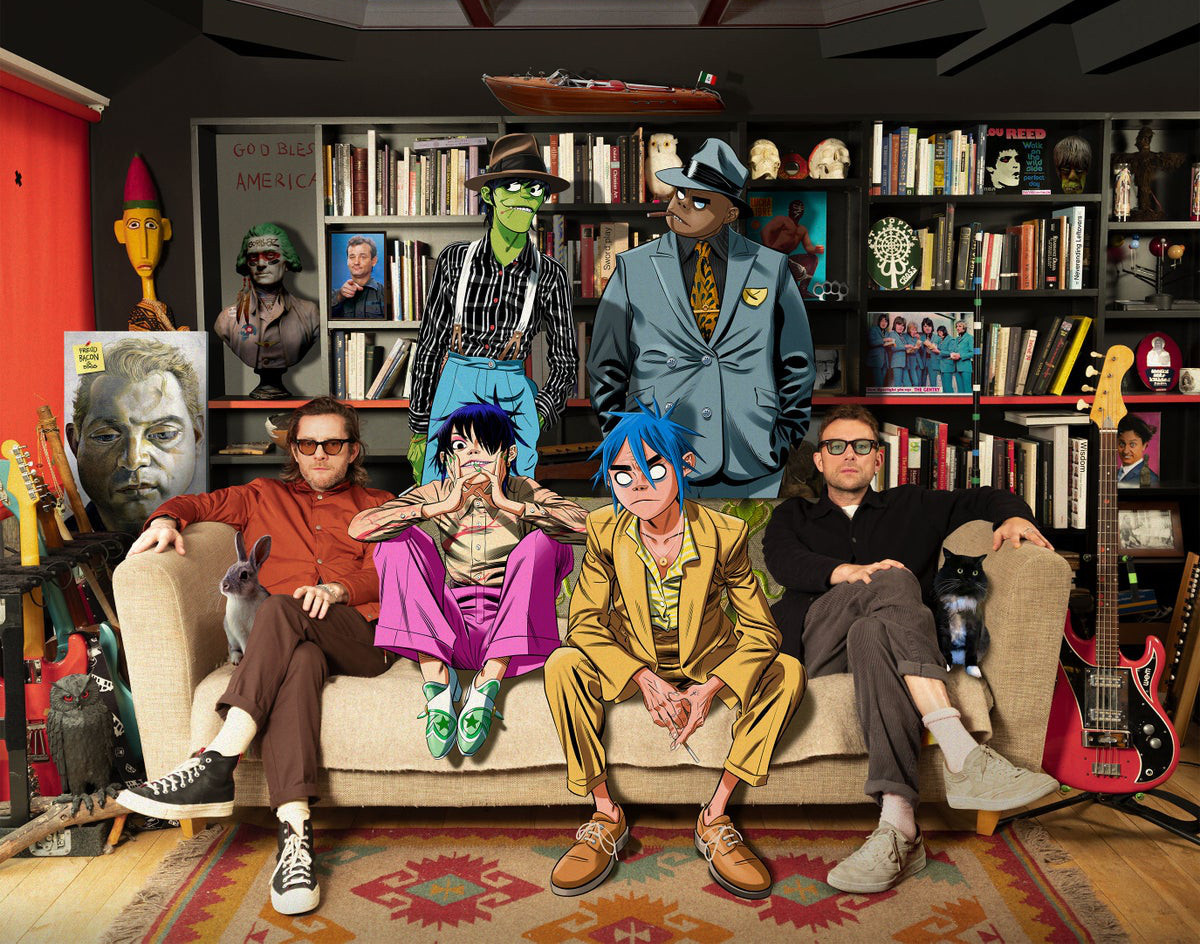 This Week In Dallas, Head Straight For The Floor With Ricky Montgomery, Feel Good With Gorillaz, Ask Kyle What The Fuck Is Up & More.

We know we’re shifting into Christmas mode (some of you freaks have been there for multiple weeks now), and are just finishing up Hanukkah, but there’s some Thanksgiving-related news that was just too sweet to pass up.

It was just announced that Netflix is developing a movie based on the viral, real life story of Jamal Hinton and Wanda Dench — the pair from Arizona who won the hearts of the internet when they were brought together by a case of wrong number. If you’re out of the loop, Dench sent out a Thanksgiving invite to her family and mistakingly included Hinton. It was immediately clear to him that Dench wasn’t his grandma, but when he asked if he could come get a plate anyway, she said “of course you can. That’s what grandmas do…feed everyone.” Hinton’s Tweet of the exchange went viral, and the two have celebrated Thanksgiving together for the past six years.

Abdul Williams is set to write the film with Robert Teitel and George Tillman Jr. producing. Hinton took to social media to express his and Dench’s excitement.

I am very excited to announce our new partnership with Netflix. We thank every single one of you for your love and support in our journey the last 6 years. We can’t wait to tell our story on the big screen! 🎥🍾 pic.twitter.com/0heCmEWMDM

We do wonder what kind of drama will be sprinkled in to quantify a full-length feature — someone burns a casserole? But a Thanksgiving movie is a fun concept regardless — the infinite catalogue of Christmas movies can only be repackaged and resold so often.

We love some wholesome news!

Keep the good vibes rolling with any one (or more) of fun DFW events we compiled for you this week.

Laufey and Ricky Montgomery at House of Blues
Influenced by classical composers and jazz musicians, this Chinese/Icelandic artist has the smoothest, jazziest voice and makes music that sounds way beyond her years. Co-headlining is Ricky Montgomery, who gained a small but mighty following during the days of Vine. Since then, (and with the help of TikTok blowing up Line Without a Hook and Mr. Loverman) the singer-songwriter has been making waves.

fArthouse Mondays Film Screening Series at Rubber Gloves Rehearsal Studios
Partnered with Janus films, Rubber Gloves is turning into an art house theater every Monday. This is the first night of the series and the film of choice is Chess of the Wind, an Iranian murder mystery, which was restored in 2o20 after it was presumed lost during the Iranian Revolution of 1979.

The Brummies at Three Links
This Alabama-born band has a sound that’s crossed between psychedelic rock and ’90s indie rock. With a handful of singles at EPs, the band currently has two full length albums out, one from 2018 and the other from 2020. So I think we’re due for another one soon, boys.

Chelsea Grin at Amplified Live
Let’s go, metal heads. The band has released a couple of singles these past couple years, including “Vanilla Paste” by Tallah which Chelsea Grin’s vocalist Tom Barber was featured on, among other metal musicians. We should expect a new album very soon from these guys.

Rosegarden Funeral Party Album Release at Granada Theater
The goth-rock misfits of Dallas have blessed us with In the Wake of Fire, which is out now if you want to preview it before the show. This album will be performed start to finish at this release party, as well as their 2020 project the TAKE COVER series in which the band covered a song from an artist that has influenced its sound. Each cover had its own music video and featured a local musician — who will all be in attendance performing their respective song.

Gorillaz: Song Machine Live From Kong at Alamo Drafthouse Richardson
Appropriate for the times, everyone’s fave virtual band is doing a virtual concert. This show was live-streamed last year and is now coming to theaters for one night only. The band will perform songs from their latest release Song Machine Season One: Strange Timez. Also, despite her not being featured in the concert, Dallas’ own St. Vincent sings on “Chalk Tablet Towers,” which is pretty dope.

PEEKABOO at Stereo Live
Matthew Lucas — aka PEEKABOO — broke out in the electronic scene in 2018. His latest single “NOSEBLEED” featuring EPTIC has a darker vibe than the majority of his past stuff, seemingly taking inspiration from metal progressions.

Nick Colletti at Addison Improv
We owe a lot to Colletti when it comes to our internet vernacular — suh dude, what the fuck is up Kyle, get your boy, dog (that last one was a group effort.) Another ex-Viner on this weeks lineup, Colletti has expanded his comedy career past the seven-second nuggets gold he once gave us.

Lorelei K Single Release at Three Links
Another local fave is having a release party. The avant-pop artist will be releasing her newest single “Mountain of Smoke,” her fifth of 2021. She released her EP The Mythic Girl EP this year as well. Nicole Marxen will also be preforming.

Giveon at The Studio at The Factory
His baritone voice is a perfect fit for the R&B-tinged soft pop he’s dishing out. Giveon has appeared on Drakes Certified Lover Boy and Justin Bieber’s Justice, but it’s a new kind of pleasure to hear him solo. The tour is aptly named the Timeless Tour — his sound his truly timeless.

Violet Bell at Windmills
A unique sound of Americana, this duo blends folk music with psychedelia and soul. With lyrics steeped in mythology and love for the Earth, this act makes some truly ethereal stuff. Perfect for the cottage core crowd

She & Him at McFarlin Auditorium
Get into the holiday spirit with this Christmas party-themed concert. “She” is musician and actress Zooey Deschanel, and “Him” is country-folk artist M. Ward. The two met during the production of  The Go-Getter, in which Deschanel was starring in and Ward provided the soundtrack.

Academy Espresso Nutcracker at Majestic Theatre
Dallas Black Dance Theatre presents the classic holiday ballet with a jazzy twist. If you can’t make it to an in-person showing, there’s on-demand and live-stream options. The company has three other productions coming up in it’s 2021-2022 season which can be found here.

Camp Out Beat Battle at Club Dada
For the past two years, this event has given a platform for Dallas’ best producers to showcase their tracks while going head-to-head in a bracket competition. This show is the championship, so best of the best. There’ll be Grammy Award winning judges, whose identities right now are a mystery but will be reveled this week.

Milky Chance at House of Blues
You ever dance like this before? This German duo are stopping by Dallas on their North American Tour. Friends since high school, they released their debut album Sadnecessary in 2014 with great acclaim, particularly for “Stolen Dance.”  But one-hit-wonders are they not, just give 2021’s Trip Tape a listen.