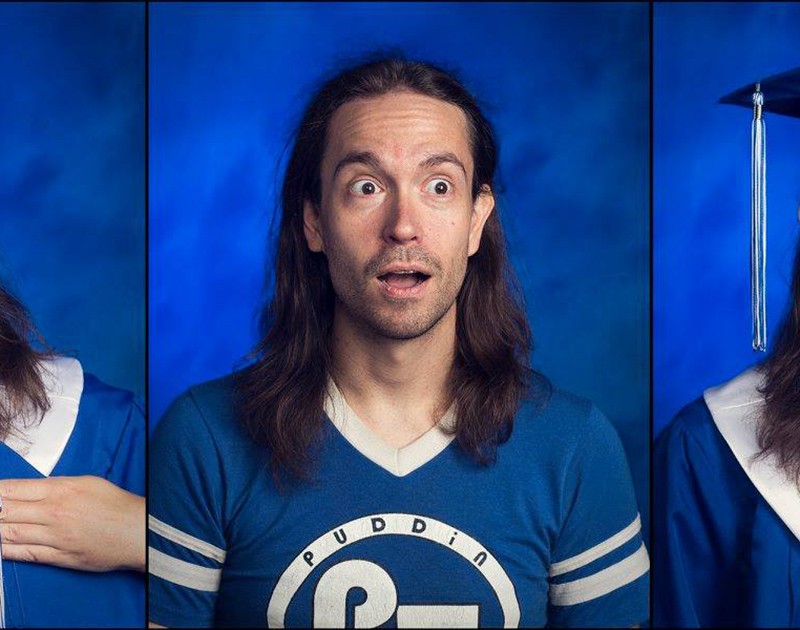 Bret Crow’s “Embrace The Silly Shit” Approach To Comedy Has Led Him To Dallas Comedy House, Where He’ll Perform For the First Time Friday Night.

As a solo artist (billed as The Bret Crow Show), Crow builds surprisingly complex arrangements with his bass and a loop pedal. In his bands STARPARTY and Puddin Taine, he finds opportunities to weave comedy into bigger ensemble performances. What’s his secret? As we discussed below, he maintains a commitment to what he lovingly terms “silly shit,” material that strikes at the heart of pure comedy.

This Friday, Crow will perform for the first time at Dallas Comedy House, hosting the venue’s next Friday Night Showcase. He’s enjoyed longstanding success performing in and around Denton and it’s led to recognition and more opportunities to work standup shows in Dallas.

I spoke with Crow about his upcoming show, his approach to merging music and comedy and his future goals as a performer.

You’re hosting the Friday Night Standup Show at Dallas Comedy House. It’s your first time performing there, but you’ve been on quite a few comedy shows before.

Oh, absolutely. Putting on ones for us as well as joining them.

Yeah. The last [comedy] show I did was Brian Breckenridge’s show at Dr. Jeckyll’s. I’m starting to get more into the comedy scene, which is nice.

We should probably make it clear how you’re bringing something different than traditional standup.

I would say it’s more like musical comedy, sort of like Weird Al or Stephen Lynch. Reggie Watts, too, since I use the loop pedal.

You do all original songs, right?

Mmhmm. There’s a couple of covers I do for funsies, but the main music that goes on albums I would sell is all original songs.

How far into playing music did you get before bringing comedy in?

I really tried to put humor into my music since I was a kid, since the very beginning. I remember being 10 years old and telling my mom, “When I grow up I want to be a comedian!” I was watching — that was the early days of Comedy Central — so like Kids in the Hall all the time, or any sort of comedy or sketch comedy thing. But then after getting into music, getting my degree at UNT with it, I was still doing bands and stuff for a long, long time, since I moved out here in 2005. That was just writing my own music – humor was still involved, but actually getting into the comedy scene, that didn’t start until…the real impetus was Open Stage.

Once I had found that place, getting up onstage and being just onstage and doing my music through that avenue of performance. We were doing the band, so that was the original thing for Puddin Taine, we started doing there, but then it was just me, and I still wanted to keep doing it. I was like, “Fuck it, I’ll buy a loop pedal.” Just be the house band, do all that off the cuff. Plus they also gave me, each hour or hour and a half was, I could create on the spot, make up words, music, all of that stuff. That’s how a lot of my material was developed, just by fucking around. Just improvising. Most of the music I do with my loop pedal, that comes out of pure inspiration, off the cuff. I’ll come up with a riff or an idea of where I want to take stuff, until it solidifies until an actual, factual idea.

How do people perceive what you do at a comedy show versus a music show?

I think they appreciate it. Like it’s a different sort of thing. It’s not really what you would expect, I guess you could say. Whenever…if it were me on the outside and I saw someone come up and do a musical thing, that always grabs my attention number one, but to do it in that way. Plus, I often try to perform things that I think would be funny. Like doing “Turn Down for What” with the kazoo, then go into the “Diabeetus” song right after that. Then a lot of that is people are laughing at me doing a stupid dance or something like that.

A lot of times your comedy doesn’t even come through the lyrics, but the structure of what you’re doing.

It’s a lot like “The Boogey Man” song, that’s a lot about creating characters and doing voices. Lots of physical stuff goes a lot into what makes that funny.

Do you think of yourself as part of the comedy scene?

I like to think so. Maybe more the Denton one than Dallas, I guess for right now. Getting in front of people…each time I’ve played, any time I’m able to do my solo stuff, it always gets a good response.

I was gonna ask you about the Denton comedy scene – I’ve known you for a little over three years now. The comedy scene in Denton — where you’ve lived the whole time and where I lived for part of that time — has been growing so much. I’m guessing that’s been a good thing for you.

Oh yeah. That’s really just been helpful through Joe [Coffee] and Colton [Jones], they’re the ones who I guess are taking over the booking of the shows? Because I’ll put on a show and say, “Yeah, it’s a comedy show.” But just being able to fall into that puzzle piece has been really nice.

It seems like the comedy scene has always had an easy time getting on board with what you’re doing, bringing you in.

Oh yeah. Very receptive. Wanting to keep it alive, that’s a really cool thing I’ve noticed. There’s a group that, any time you’re at one of those shows [in Denton], they’re there as fans, not performers.

You don’t just do musical comedy. You also do improv, right? Can we talk about that?

I’ve been doing Zingerz Comedy Club now for about two years. And that’s still growing and developing, we’ve had to move venues a couple of times, but each weekend has been really good shows. People have been really receptive, it’s just still in the beginning stages of promotion and development. Getting in front of people and getting people to actually want to show up. It’s like Whose Line Is It Anyway? comedy, so it’s always fun and different. Especially the suggestions you’re getting. When you’re doing clean comedy, and you’re getting suggestions like…sometimes you have to go to like fart and poop jokes, like PG-13 Nickelodeon comedy. We even did a show at a daycare. [Laughs.] Five and six year olds, some of them a little bit older. But for kids. We did the game “Sit, Stand and Bend,” where you start with one person sitting, one standing and one bending. So we did a “Goldilocks and the Three Bears” scenario, stuff like that.

Are you comfortable with the kid audiences?

Oh yeah. Just the other weekend I was playing here at Rusty Taco [in Denton]. They had me set up [on the patio], and they had a group of kids sitting up front. They love it, they love the looper stuff, especially when you can connect with them. And they can see you creating the song in the moment, they can witness that.

We’ve talked about the solo aspects of your music, but you do play in some groups. Do you feel like you get to exercise your comedy muscle when you’re in a group?

All of my music, I always try to incorporate humor. That was a big thing with Puddin Taine. That’s something we still do, a lot of our songs tell a story, try to convey something. Also through how Brandon [Dowd, Puddin Taine’s lead singer] emotes with the lyrics and everything. Some of them lay heavy on the “love” aspect I guess, I don’t know, but we also have our songs about slaying dragons. Brandon wrote those lyrics about masturbation, Game of Thrones and dropping acid. It’s figuring out you just jacked off to Game of Thrones after dropping acid. It’s in that moment. If we made a music video for it it’d be hanging out in an apartment, then all of a sudden, Game of Thrones shit, everybody’s fighting, then come back to it like, “Oh.” [Laughs.] Sort of David Lynchian. We do that with our songs, a lot of the music. If we incorporate…I’ve never liked doing music I had to think or feel about, I like doing dumb shit. Writing about shit that…when I’d gone through my divorce I’d written a couple of things like that, but I was like, “Fuck this. This is dumb.” I just want to write about silly shit, make up a character, something like that.

Can you tell us about your experience as someone who supports themselves as a professional performer, someone who makes their living just through their creative works in North Texas?

It’s pretty easy if you can have a professional attitude, take things seriously, show up on time. Or early, preferably. Getting out there, making the real contacts with the people who really matter for…well, sound guys and everyone else matter, but it’s…

You want to make sure you connect with the guys who write up the contracts and put them in front of you.

Right. You want to be as professional as possible. It was pretty easy – if you can maintain a basic human consciousness for talking to other people, that’s really all you need to do. And just be cool.

I know you’re working a lot in and around the Denton area, but I’m seeing you – as a solo artist and with Puddin Taine – working more in Dallas. Does that guidance still apply?

Oh, absolutely. We have to in order to be able to get more gigs. Especially when you’re doing some gigs where you’re required to fill three, sometimes four hours of music with three sets or something like that. And to maintain that energy and be good through the entire night, not drink yourself fucking dumb, eat food, that sort of shit. You train for not just the race, it’s a marathon, you have to train for that.

What’s the big thing you’re shooting for as a performer right now? What’s the next big target for you on the horizon?

Just to get my music out there, so people will actually listen for it. And then be able to book more gigs. The dream is being able to tour and perform wherever you can in front of as many people as you can. Getting to a financially independent way of doing that. I have an album – I have one album already out, I have another that I just have to get the artwork done and then that’ll be out and done. And then getting that into people’s faces. Once I have actual physical copies, getting them out there, people start trading, listening to it, stuff like that.

You’ve been played on the new Denton station [KUZU], right?

Yeah, they just did that! That was really nice of them. Through Mateo Granados.

Good response on that?

Mmhmm. People were tagging me on Facebook that they were listening to it, that’s good enough for me. A couple of people actually heard it. I think I was in the middle of rehearsal or something, I couldn’t run out to my truck and check it out. People were tagging me on Facebook right after like, “Bret Crow on my radio!” I was like, yeah, okay, sweet! They actually heard it, I’m not crazy. [Laughs.]