The Cowboys Need To Stop Making Everything So Difficult. 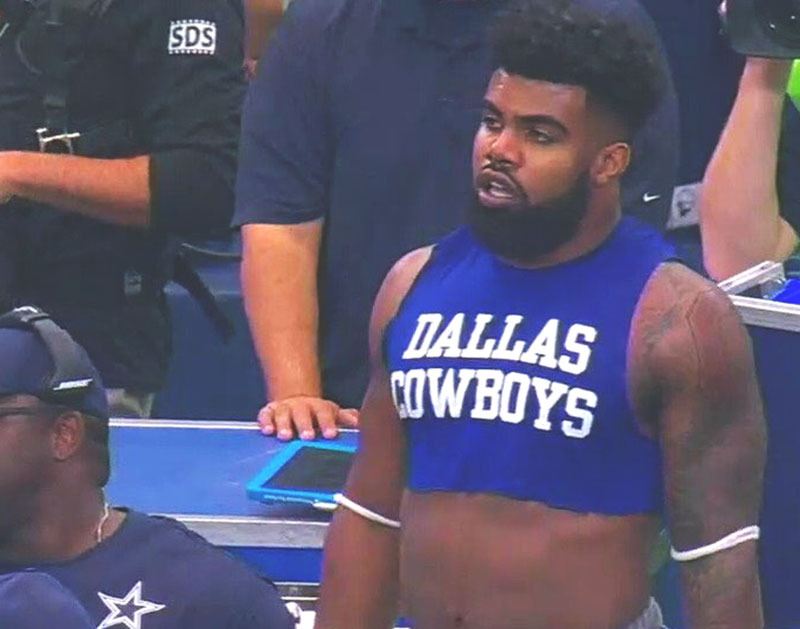 A Tale of Two Halves: After Starting Strong Against The Rams, The Cowboys’ True Colors Began To Show As The Game Went On.

Things looked good at first. They really did.

Coming off a Monday night win against the Cardinals of Arizona, the Dallas Cowboys seemed ready to begin a winning streak as they hosted the Los Angeles Rams at AT&T Stadium out in Arlington on Sunday aftenroon. And, right out the gate, Dak Prescott and Ezekiel Elliott looked damn near unstoppable as Cowboys offensive coordinator Scott Linehan appeared committed to having this team do what it does best, albeit with some new, welcome wrinkles.

Following the trends set by other offenses around the league, it sure looks like Linehan and head coach Jason Garrett were focused on getting Elliott involved in the game not just on the ground, where he had 85 yards and a touchdown on 21 carries, but also through the air, as evidenced by his four catches for 54 yards and a touchdown. It was Zeke’s most productive game of the season, his sixth career multi-touchdown game. Even his backup Alfred Morris, who spelled Zeke for a few plays, looked solid, breaking a long run for 70 yards.

That all seemed to calm Prescott down some, too, as he looked a bit more accurate early on in the game than he has throughout this young season. But he still didn’t look great, if we’re just being honest. Although he and Dez Bryant connected for five catches and 98 yards, the two still seemed out of sync with each other. What’s to blame for this? I’m not sure if it’s Dak playing things safe, if he’s lacking the confidence to throw into tight windows for Bryant or if the talented corners lining up against Dez really are as good as advertised. Either way, his final tally of going 20-for-36 through the air for 252 yards and three touchdowns (plus an interception) looked better on paper than it did in the eye test. His bad throws? They looked real bad.

Still, there was reason for excitement and pause alike as the Cowboys went into halftime with an eight-point lead at 24-16. On the plus side, the offense was hitting on all the cylinders that made it such a success last season. But, on the bad side of things, the team didn’t get the kind of separation it needed to from this Rams team, which kept things close — too close, obviously —  by capitalizing on multiple long field goals.

Of course, the Cowboy’s special teams play did the Rams some big favors in that regard, too. Listen, I’m usually not one to agree with the idea that games can be won and lost on a single play but Ryan Switzer’s fumble on a punt return in the second quarter was a crucial error. Not only did the Rams score at touchdown in their ensuing effort, turning a 17-6 game into a 17-13 one, but that muff totally changed the tempo of the game. Following Switzer’s error, the Cowboys’ offense, which had scored on every drive up until that point, began to sputter. Worst part is, it didn’t have to be this way! All he had to do was call for fair catch, but the guy is clearly looking to make a big play every time a kick comes his way. That’s not necessarily a bad thing, but you’ve go to be smart about things. Fumbling when a fair catch would’ve sufficed isn’t smart. Neither is returning kickoffs when you catch them from eight yards deep in the end zone, as Switzer had earlier in the game.

Bad as special teams were against the Rams, though, it’s not like the defense was much better. As expected, that side of the ball remains the Cowboys’ weak like. Sure, the team makes plays at times, but these guys are just so inconsistent. After having effectively contained Todd Gurley for two and a half quarters, the Rams’ running back turned the game around in the blink of an eye, taking a 10-yard slant 53 yards to the house and collecting 121 rushing yards, with most of those coming in the second half. Meanwhile, the Dallas secondary held star Rams wideout Sammy Watkins to just one catch for 17 yards on the day, but fell victim to timely catches from rookie receiver Cooper Kupp, whose five catches and 60 yards on the day doesn’t sound too impressive removed from the context that all of them, including his touchdown reception, came at important times in the game.

Throughout the second half, the whole defense just looked gassed — like the other team had a halftime break but Dallas didn’t. Defensive coordinator Rod Marinelli seems to be combating this with zone formations, but all that ends up doing is opening up the field for the opposing offenses to go nuts. Know this: If the Cowboys D drops back into zone coverage, someone on the field is going to miss their assignment. It never fails! Meanwhile, I suppose Demarcus Lawrence deserves props for once again registering a sack in this game and bringing his league-leading season total to 7.5, but that was about the extent of the pressure the defense put on Rams QB Jared Goff.

And, as the Cowboys offense sputtered in the second half and only mustered a mere six points, the lack of pressure the Cowboys defense put on the Rams’ offense allowed the Rams to overtake the lead.

Still, the ‘boys had their chances to keep things interesting — three shots at a two-point conversion, specifically — while down 32-30. But it was to no avail. And even when the Cowboys got the ball back for one last attempt at a game-winning drive, they came up a yard short on a fourth down attempt.

It was all incredibly disappointing considering how Dallas started the game.

Yeah, I know it’s still early and that the season is a long one. But if Dallas has any chance of making the playoffs this year, it will need to eventually string together a winning streak. And with the Green Bay Packers coming into town next Sunday, they’ll need to bring their A game — and to keep things at that level for the entire game.

If not, I fear this year’s win-loss column will be identical to the team’s 2013 8-8 record — or worse. Because even a quick look at the team’s upcoming schedule shows that things aren’t about to get any easier around these parts.

Really, the thing this team needs to do is stop making things more difficult for themselves.