On Monday, The Boys Played The Cards They Were Dealt. 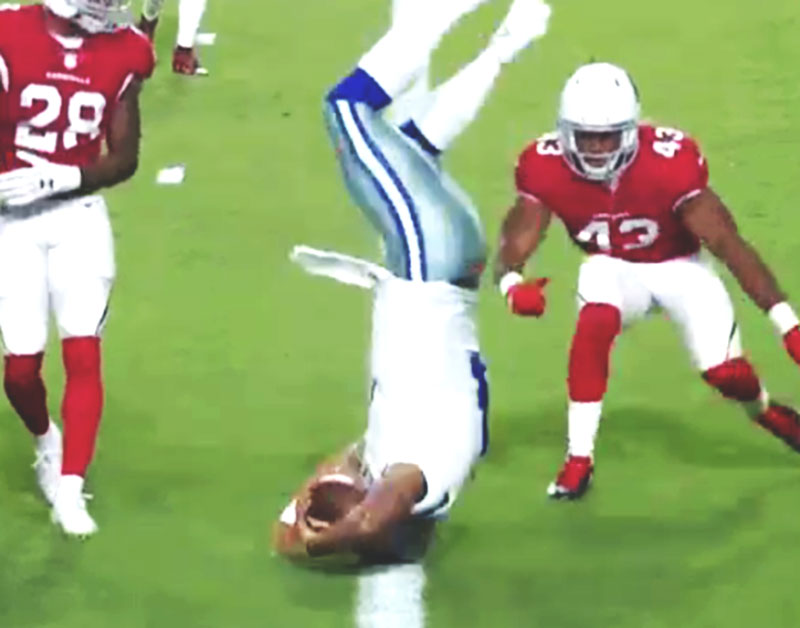 After Yet Another Slow Start, The Cowboys’ Defense Created Some Pressure, And Dak Prescott And Dez Bryant Put The Offense On Their Backs.

Going into last night’s game, the Dallas Cowboys were 0-4 in their last meetings against the Arizona Cardinals. And, early on in the team’s 79th all-time appearance on Monday Night Football, it didn’t look like things were going to change.

The team had a slow start defensively and offensively. Yeah, in the first quarter, things just looked like more of the same from this Cowboys team. Just like the Broncos the previous week, the Cardinals’ first possession was an easy march down the field for seven points.

Fortunately, the Cowboys — and specifically their defense — woke up shortly after that.

Although the team didn’t immediately respond with points, it became clear before long that the team’s defensive linemen came ready to play. Pretty much all game long, the Cowboys’ linemen were able to get consistent pressure on Cardinals quarterback Carson Palmer, guaranteeing that the game would be kept close even if the offense sputtered. Demarcus Lawrence, in his contract year, seems to have arrived, notching three sacks in the game (the most by a Cowboys player since Demarcus Ware in 2011) and upping his season total to 6.5.

And he was hardly alone in his efforts, with second-year player Maliek Collins adding two sacks of his own, and Tyrone Crawford contributing one as well. In total, the defense’s six sacks were the most racked up by a Cowboys D in single game since Week 3 of 2013. It wasn’t just the defensive line that shined, either. Another bright spot on defense was the performance of rookie Jourdan Lewis, who recorded six tackles, a tackle for a loss and a pass deflection in just his second-ever NFL game. Following his interception last week, Lewis seems to be blossoming at the perfect speed. (Unfortunately, both Lewis and linebacker Sean Lee left the game with hamstring injuries.)

As for the offense? Well, that was another story. Offensive coordinator Scott Linehan’s offensive play-calling has become so predictable. I know he isn’t the razzle-dazzle type, but a little creativity couldn’t hurt, could it? Rookie wide receiver Ryan Switzer, a known play-maker, still hasn’t been incorporated into the offense at all at this point in the season. And while Ezekiel Elliott bounced back from his disastrous game last week with a quiet 80 yards and a touchdown on 22 carries, his efforts were stifled early on against the Cards.

The script flipped — literally — because Dak put the team on his back in the second quarter, rushing for a touchdown that opened the floodgates and allowed his receivers to start makings plays of their own. Brice Butler had a few big ones, including a touchdown reception. And even though he only had two catches all game and was for the most part shut down by top-notch Cardinals cornerback Patrick Peterson, star receiver Dez Bryant made his presence felt with an immaculate 15-yard touchdown catch in which he dragged half the Cardinals defense into the end zone on his back.

Perhaps the 28-17 win wasn’t the kind of dominant victory we’ve been expecting out of this season’s Cowboys, but a win is a win — and a road win on a national stage is even better.

Next week, as the Cowboys welcome the Los Angeles Rams and their surprising 2-1 record to town, they should be able to continue finding their groove.