Laotian Culture Is Breaking Out Across Dallas-Fort Worth. 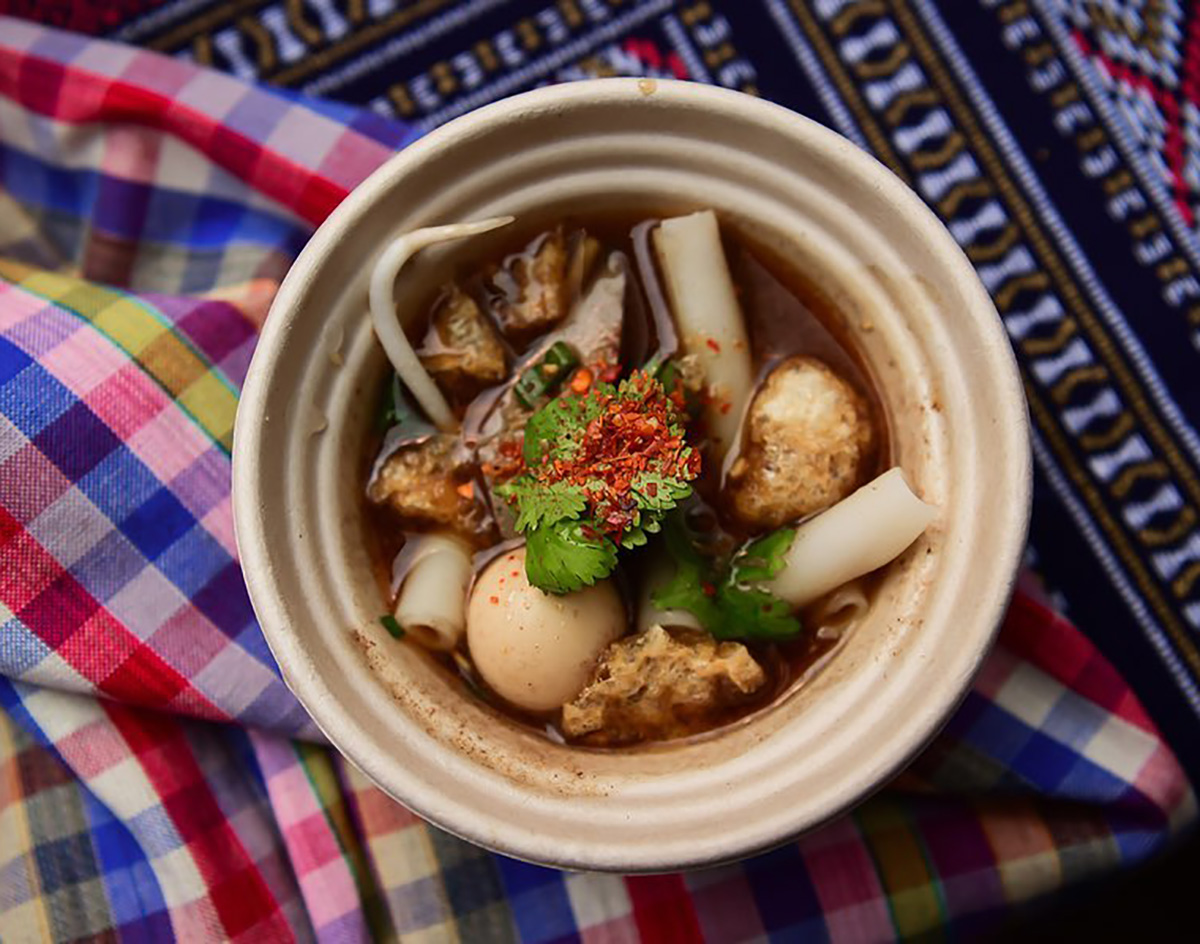 Sprung From A War-Torn Home, Laotian Culture Has Set Up Roots Stateside And Is Keeping Its Stories Alive Through Dallas’ Food, Arts And Culture Scenes.

Laotian cuisine has recently put Dallas on the national radar as a dining destination, thanks in large part to local gems like East Dallas’ Khao Gang — formerly Khao Noodle Shop — garnering praise from the likes of Bon Appétit and Food & Wine.

That level of notoriety comes at a price, though.

“I say, ‘Look Motherfucker, Lao food is Lao food, but I do it my way,’” Sirisavath quips. “If you want to open a restaurant, then open your own.”

“We work hard for what we do,” he says. “I’m a first generation Lao-American. I grew up in Amarillo with all the refugee families. We struggled to figure out how to express Lao food in America.”

Today, Texas has the second highest population of Laotian Americans in the U.S. behind California, with Dallas-Fort Worth having emerged as the third-highest Laotian-populated U.S. city. In particular, Saginaw — where Laotian newcomers were attracted to the rural landscape and affordable property — is home to a huge Lao New Year celebration called Pi Mai and hosted at the local Buddhist temple Wat Lao Thepnimith. In recent years, more and more Buddhist Wats have started popping up around the Metroplex to provide sanctuary for the growing community.

With a burgeoning community, it makes sense how Laotian restaurants like Khao have been able to establish themselves among the area food scene. Praise for their food isn’t relegated just to a matter of geographical circumstance, though. The fare’s slight creative divergences from traditional Southeast Asian dishes provides an exciting addition to the North Texas palate. Sirisavath believes that sharing the traditional food he grew up eating with the rest of the world is the best way to keep his heritage alive.

“I’m just tweaking and utilizing things around me,” he says. “I’m doing the Lao food the way my mom taught me.”

It’s hard to fathom that there are places in the world that have been stricken with terribly needless violence like Laos has. Today, it is considered the most bombed country in the history of the world. This unwelcome distinction stems from the result of a nine-year covert operation during the Vietnam War by the U.S. to thwart the communist overthrow of Laos by the group Pathet Lao, which was aligned with North Vietnam. Most Americans are unable to pinpoint Laos on a map, much less recall any knowledge of the cluster of 260 million bombs — a rough average of deploying bombs every eight minutes for a decade — that were dropped in the country at that time.

It’s estimated that about 30 percent of those bombs failed to explode on impact, and since the end of the “Secret War” in Laos, over 50,000 people have been killed or maimed by the exploding remnants. There is hardly a Laotian family in America that doesn’t know stories of relatives or family friends who tragically lost their lives or limbs.

“My wife’s family had to go through that.” Sirisavath says, “It’s something you never forget, but you learn how to move on and accept what happened. It’s the past. We can only move forward.”

In 2016, Barack Obama pledged $90 million over three years to aid in clean up in Laos. To put that in perspective, the U.S. spent $17 million a day (when adjusted for inflation) on bombing Laos.

After the Communist coup, neutral Laotian refugees dared escape by night across the vast Mekong River to Thailand. The unlucky ones drowned, were shot or captured and taken to prison camps. Still, others under the leadership of the Royal Lao Government, battled their own Civil War against Pathet Lao — a proxy war funded and initiated by the CIA. They fought for control of the supply route called the Ho Chi Minh Trail and 200,000 Laotions — about a tenth of the population — lost their lives.

Peter Southidara is a first-generation Laotian-American and president of DFW Lao Heritage, a nonprofit organization that aims to preserve Lao Culture in North Texas. He knows many stories of refugee displacement.

“If it had not been for those men who held the secret Ho Chi Minh city, the American casualties would have been much, much worse,” Southidara says.

His grandfather, a lieutenant colonel in Laos, was among those captured and placed in the prison camps. Southidara’s mother, not wanting to leave her dad, enlisted in the army until the two were able to escape together to refugee camps across the MeKong. Southidara recalls stories of a river painted red with the blood of those that couldn’t get out, and catfish that were big enough to swallow men.

“The ones who were lucky got to be on boats to Thailand,” Southidara says. “The unlucky ones had to swim across. All this while under gunfire. The entire Mekong was filled with blood.”

His mother’s flight led her to camps in Thailand where the family reunited after nine long years before coming to America as part of the mass Laotian diaspora.

“That, in combination with being in a new country and not understanding the language, puts older Laotians at a major disadvantage,” Southidara says. “Many of the elders have a disconnect from the community and don’t know where to get help.”

Sirisavath’s parents were among those refugees as well. They were initially sponsored by a Baptist church out of Amarillo that aimed to assist in the refugees’ American integration. Sirisavath remembers growing up in Amarillo having always been surrounded by a prominent Laotian and Vietnamese community.

“The churches tried to help as much as possible, but it was hard,” Sirisavath says. “People are stubborn — Laotians don’t believe in God. They believe in Buddha.”

Sirisavath’s wife, Noy Srisouphan, was born in a Thai refugee camp and grew up in East Dallas, where another prominent hub of Southeast Asians emerged.

The church sponsorship program was built from private agencies contracted with the federal government to administer social services to the refugees. Strict emphasis was put on job placement in a candid example of American psychology at play. In contrast, another refugee hub in Germany, was allocated federal funds for cultural integration in subjects like language skills for the first year after immigration — without which, authorities there asserted, employment would be very difficult.

“My parents came here thinking they could live the same way they did back home, but it wasn’t like that,” Sirisavath says. “They had to figure out a lot of things for themselves, and relied on me to translate paperwork for them.”

Before the war in Laos, its people lived simply — often growing their own produce and livestock. Refugees were forced to adapt quickly after being thrust into a society with a production-based set of values. Many became tradespeople; Sirisavath’s father took the path as an odd-job handyman that eventually led to him becoming a welder.

“He had to push himself to do that — and that’s why my parents pushed me,” he says. “They stressed the importance of education, but always said to follow something I loved.”

That dedication and work ethic paired with his pride in sharing his culture is a foundation for the success of his East Dallas gem. Sirisavath hopes that as his culture continues to become illuminated in the U.S., the Laotian people here will in turn be able to adapt, diversify and become more open to support from outside their own familiar communities.

Southidara’s nonprofit is striving to expedite that transition. It educates American-Laotian youth to become leaders and advocates in the community by teaching the hard-learned lessons of their elders. DFW Lao Heritage also teaches things like cultural music, dance and how to play traditional Laotian instruments, hosts community food drives and additionally offers social services and assistance to the broader Laotian community.

“We would like to perform more around the DFW and surrounding areas, sharing our beautiful culture,” Southidara says. “We also teach cooking, and introduce guest speakers of influence who have gone from the slums and ghettos to high society and are successful.”

The organization focuses heavily on kids that want to pursue art degrees. Southidara says its the next generation Laotians will depend upon to tell their story and ensure that Laotian culture lives on for generations to come.

“I feel that a lot of Laotians aren’t aware of their own cultural heritage,” Southidara says. “A lot of Americans don’t even know where Laos is. They ask where I’m from, and I say, ‘Laos,’ and they say, ‘Where is that?’”

Laotians have a saying: Baw pen nyang. It’s what “hakuna matata” is to Swahili — “no worries.”

It’s that laid-back attitude of Laotians, as Sirisavath puts it, that has helped them navigate the rocky road they were presented with, all while beaming with pride as they share their stories — and plates.

“I will never feel that pain that my family had to go through but that’s why I have so much pride doing what I do,” Sirisavath says. “I’m American-ish, but for me it’s just about being my own individual, because otherwise my parents brought me here for no reason.”