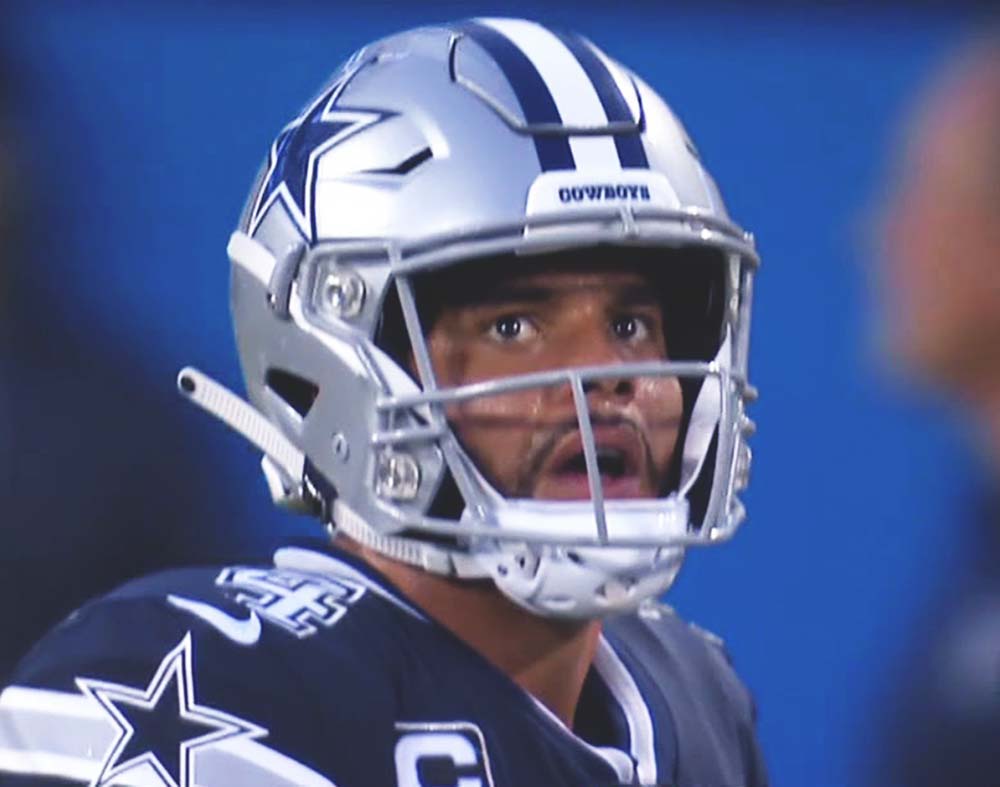 The Good, The Bad & The Ugly Of The Dallas Cowboys’ Disappointing, Season-Opening 16-8 Loss To Cam Newton and The Carolina Panthers.

Well, we knew there were a bunch of reasons not to be optimistic about this 2018 Dallas Cowboys season.

But that didn’t stop us from getting our hopes up, thinking that we were just being glass-half-empty types and wondering if maybe this would be the year that everything just kind of clicks for Jason Garrett and his disciples.

Just not yesterday, they didn’t.

Don’t get lost in the seemingly sunny facts that the Cowboys only technically lost this season-opening away game to the Carolina Panthers by single score and were still within striking distance of tying things up in the waning minutes of the game. Anyone watching Sunday afternoon’s broadcast could tell you that the boys just didn’t look great in this 16-8 loss.

At least it’s over, right?

Before we fully turn the page on this game we’d like to forget sooner than later, let’s take a look back at the good, the bad and the ugly from Week 1.

As we expected, it was the Cowboys defense — not the big-name offense — that kept Dallas in this one. DeMarcus Lawrence picked things up where he left off last season, looking especially disruptive en route to tallying six tackles and a sack. Even without Randy Gregory or David Irving around to help out, the defensive line was a bright spot, knocking the tough-to-bring-down Cam Newton to the ground three times. The entire D frustrated Newton, limiting him to only 161 yards passing on the afternoon. Linebacker Jaylon Smith still may not be 100 percent yet, but his increased mobility is impressive and should go a long way toward upping this team’s linebacker play. Meanwhile, the experiment of transitioning Byron Jones to cornerback started off on a good foot. He and Chido Awuzie didn’t look too bad out there!

It’s looking like we may miss Travis Frederick more than we thought were going to. It was tough watching him standing on the sidelines as Dak Prescott ran for his life against the Carolina Panthers’ tough front seven. Obviously, his health is rightly his top concern, but if he’s going to out for the entire season, the Cowboys are going to have to do better than Frederick’s current replacement, Joe Looney, who looked way worse than anticipated on Sunday. Same goes for rookie guard Connor Williams, who was manhandled the entire game. Those weak spots left Dak Prescott with minimal time to do anything, let alone throw an accurate pass. In turn, he was sacked six times. Worse, the O-line play seemed to hurt Ezekiel Elliott, too. Virtually a no show in the first half, the star running back ended the game with 69 yards (nice) and a touchdown. Scott Linehan’s playcalls weren’t exactly thrilling, either. I thought we were supposed to see some creativity on offense this year? Nope. It was the same old predictable bullshit. I mean, they started the season in I formation! You think the Panthers knew a run play was coming? Of course they did. They knew everything the Cowboys were doing before they did it. That’s why Dallas was 0-for-6 on third down conversions through the first three quarters of the game.

From the beginning tick, Dak looked off. Between his protection breaking down and his trusty Zeke crutch not providing much stablity, the QB1 didn’t quite come off like the cocksure NFL veteran he appeared to be during his drama-filled offseason. His inaccuracy is a problem; I honestly lost count of how many times he underthrew his receivers. Worse, it was abundantly obvious on Sunday that, with safety blankets Jason Witten and Dez Bryant gone, this receiving corp has no identity at all. Sure, Cole Beasley tallied 7 catches for 73 yards, but none of the wideouts reached the end zone. Instead, the offense stalled out every time it looked as if it might be primed to make a run. Let’s make no bones about it: Prescott is entering his third year in the league, and that’s the year most NFL players take the leap. Does that mean we could see him coming into his own and making defenses fear his arm? If the sample we saw on Sunday is evidence of what’s to come… well, suffice it to say that it’s gonna be a long season.

Want more of Paris’ thoughts on the Cowboys? Check out the Any Given Monday podcast he co-hosts.