Watch Out For Doughnut-Bearing Clowns In Frisco. 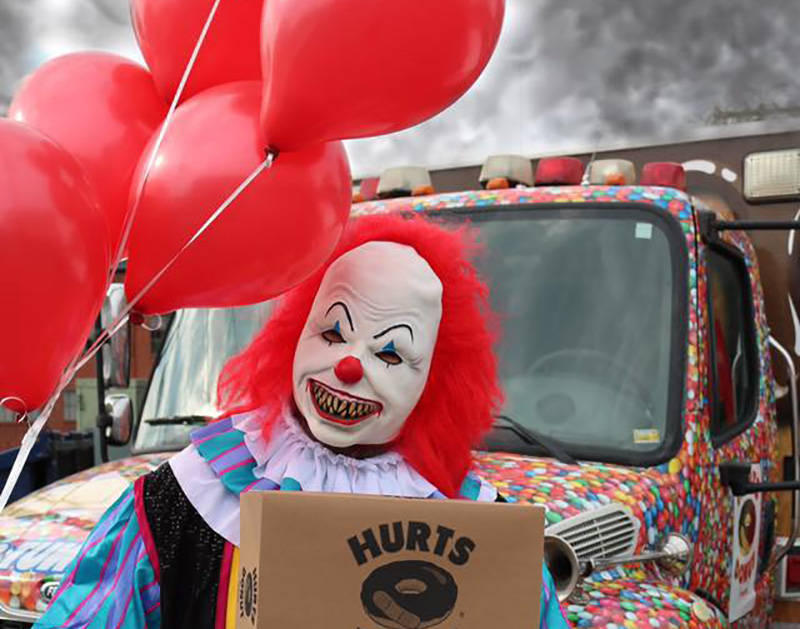 Hurts Donut Co. In Frisco Is Capitalizing On The Popularity Of The It Reboot By Having A Creepy Clown Deliver Its Doughnuts.

Forget sending your clown-fearing friends to the movie theater to see It if you wanna freak them out next week. If you live in Frisco, just order them some doughnuts instead.

Come next Monday and Tuesday, if you order a $5 delivery from Hurts Donut Co. in Frisco and are willing to toss an extra $5 in fees into your purchase, the store will have their delivery people dress up like a clown that resembles Pennywise from the film It.

Sound like your idea of a good time? Well, you’re not alone. Store co-owner Cheryl Selby tells WFAA that demand for the clown deliveries has been crazy high since it was first announced earlier this week.

“People are evil,” Selby says. “The funniest thing is when the wives are calling to prank their husbands, and they’re so giddy and excited about it.”

Hurts Donuts posted the announcement on Facebook three days ago, and that post has since gone viral, getting shared more than 1,500 times.

The sad news for those not in Frisco is that the doughnut joint will only be delivering its peculiar assortment of donuts within Frisco city limits. But if there is a high demand for the clown delivery service, the chain says it will expand the offer to its other locations in Wisconsin, Arizona, Nebraska, Missouri, Iowa and Oklahoma.

The doughnut business is clearly capitalizing on the hit status of the reboot of the horror story, which has so far exceeded all expectations since hitting the big screen a few weeks ago. In fact, just this week, it was announced that It has now surpassed the domestic success of The Exorcist, making it the highest-grossing horror flick of all time.

It’s not the first time that the Hurts franchise has gone viral. Back in 2015, its doughnuts caught the eyes of the folks over at Buzzfeed and were labeled as “33 Of The Donuts You Have To Try Before You Die.”

This bit of web success is a little more frightening, though. No, not quite as frightening as those assholes who were spotted around Dallas last year leaving threatening messages at schools and tying red balloons to cars and various areas — but still pretty scary!

But, hey, if you’re anything like us, you will welcome your creepy clown delivery person with open arms. Because, y’know, doughnuts.