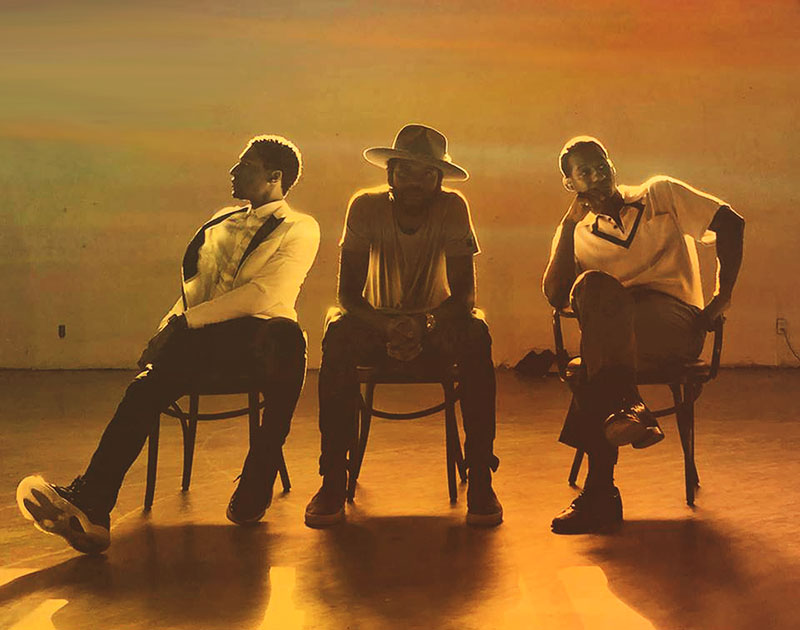 Leon Bridges, Jon Batiste & Gary Clark Jr. — “Ohio”
RIYL: Adding a little soul to your parents’ playlist.
What Else You Should Know: This collaboration between Fort Worth crooner Bridges and his pals Clark and Colbert band leader Batiste comes as part of a release called Echoes in Vietnam, for which PBS recruited a whole bunch of modern musicians of note to cover the songs that were popular in the era captured in the new Ken Burns documentary on the Vietnam War. This trio’s take on the Crosby, Stills, Nash & Young song is a whole lot more somber than the original quartet’s song about the bloody Kent State protests, but remains reverential of the source material. It’s a tasteful rendition.

Terrence Spectacle – “When You’re Lonely”
RIYL: Being one call away.
What Else You Should Know: Terrence Spectacle’s latest single is a romantic, chivalrous serenade for all the lonely women out there. Although Spectacle’s rapping on the track for a bit, it’s still fair to classify this as a refreshing R&B track — one that is thankfully straying away from the drug-induced, hedonistic contemporary R&B we’ve gotten from all too often from clones of The Weeknd.

War Party – “Start Fighting”
RIYL: Opening gifts on Christmas Eve.
What Else You Should Know: If you’ve been keeping up with the Fort Worth label Dreamy Life Records’ roll-out for the fourth volume in its Group Therapy series, you’ll know the folks behind it are very excited about it — so much so that they’ve been slowly releasing tracks from the 28-track long project from an assortment of bands on the roster. This week, that means fresh tracks like the above from War Party, as well as Sub-Sahara’s “Royale With Cheese,” on top of earlier-dropped singles from Sealion and others. For the batch, check back on October 15.

Brady Amour – “u said u wouldn’t run from this (feat. Lil Lotus)”
RIYL: Forever The Sickest Kids demos.
What Else You Should Know: Brady Amour’s greatest appeal is its familiarity. This acoustic, electro-pop tune is a callback to the late 2000s bedroom tracks from artists like Forever The Sickest Kids, Cute Is What We Aim For, PlayRadioPlay! or Brady Amour’s favorite, The Starting Line. Local emo rapper Lil Lotus event makes a guest appearance.

Matt Reed – “Know Your Worth”
RIYL: Getting hit with the truth.
What Else You Should Know: The intro to this track might lead you to believe this could be a sweet little ditty, but Reed’s abrupt raps quickly change the tone and instead spell out all the reasons why the object of his affection needs leave her man. It’s an interesting, pleasing dichotomy that makes this track work.

Saint Clair – “Today”
RIYL: Getting money, and a whole lot of it.
What Else You Should Know: Our two favorite things about Saint Clair are his unique, low-key raspy voice and his willingness to explore different sonic aesthetics on nearly all of his tracks. On “Today,” the rapper barely sounds awake. But that’s not stopping us from loving this track at all. If anything, this one feels like a long lost Cudi track. Well done, Clair.

Willo – “Hope”
RIYL: Working through troubled times and troubled ways.
What Else You Should Know: Willo has a nice, simple message for anyone listening to this song. Sings Willo here: “For everybody living life, never lose faith.” That sentiment is shared throughout this self-affirming track, which features an enticing boom-bap beat, harmonized backup vocals and Willo’s perpetual flow.

Lil Sega – “Captain Insane (Feat. Diego Money)”
RIYL: Never falling in love with Lame-Os.
What Else You Should Know: You had to know that the super-on-fire-right-now Diego Money would make an appearance at some point in this week’s column, right? Well, his influence over the city couldn’t more apparent than in this track with Lil Sega, who share’s Diego’s cadence on this 77-second track, which could frankly stand to go on for a bit longer than it does.

Señor Fin – “Somewhat Raincloud”
RIYL: being allowed to fall in love with anyone you want.
What Else You Should Know: Even though they’re rooted in Seattle these days, Denton is still home for Señor Fin, which just released “Somewhat Raincloud,” a new song from their upcoming album, titled Jazzy, which will be released October 1. Of the new song, singer Jesse Miller writes that this one is about “living to your full potential, taking risks, and not being afraid to suffer in the pursuit of love.” All good things, if you ask us.