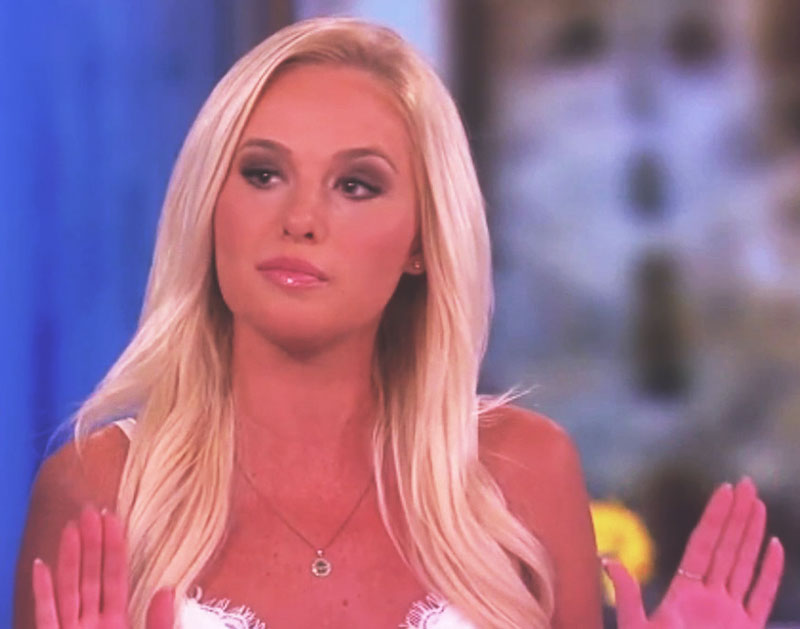 What’s Tomi Lahren Doing With Her Time Away From The Blaze? Appearing An Eyebrow-Raising American Freedom Tour With A Duck Dynasty Bro and a George W Bush Impersonator.

In this era of increasing polarization, apparently even schemes can benefit from advertising their political affiliations.

On May 9 at the Sheraton Dallas Hotel, the American Freedom Tour will provide locals a chance to hear from conservative media personalities Tomi Lahren and Duck Dynasty star Willie Robertson, along with Dave Martin (listed as “your success coach” on the event page), and author/TV host April Osteen Simons. You’ll also see “Presidential Tribute Artist” John Morgan, who impersonates George W. Bush. (Seriously. Someone still does that.) Oh, and if you attend, there’s also a real possibility you’ll be on the receiving end of pressured sales pitches from folks with dubious investment strategies and programs to peddle!

In addition to our fair city, the American Freedom Tour will travel to… actually, according the website, the tour begins and ends here, making “tour” the most misleading part of its empty calorie title. The words “American” and “Freedom” help sell the event as proudly patriotic without giving away any clear idea of what’s going to happen. But the “tour” in the title definitely appears to be outright bullshit: The event is a production of Get Motivated! Events, and it does not appear to be traveling at all.

See Also: MANIC PIXIE MEAN GIRL. // Blabbering Conservative Mouthpiece Tomi Lahren Is Based In The Dallas Area — But, Let’s Be Clear, We Don’t Want Her Here.

Is it a surprise that someone as controversial as Lahren was asked to appear at the American Freedom Tour? Well, not really. The event is trying to masquerade as a tour, so it’s hard to say they have much legitimacy to forfeit.

Past events from Get Motivated! (until the series collapsed in 2012, the seminar series was simply titled Get Motivated, without the emphatic attendant punctuation) have relied on speakers with strong conservative bona fides, or, at the least, retired athletes who can play to a conservative crowd. The American Freedom Tour (remember, it’s not a tour, they just put the word “tour” in the name) doesn’t boast a roster of retired politicians like those prior engagements, but it certainly has a lineup that would appeal to Republicans and other politically right-leaning types. The marketing and speaker selection are a braiding of faith, business, patriotism and financial windfalls, suggesting that the target audience for a Get Motivated! seminar are money-hungry Christians looking for some shortcuts to living out the quintessential hard-earned American success story.

So how does a rally with conservative figureheads turn into something with the vibe of a pyramid scheme? Based on previous accounts of Get Motivated! seminars, expect the “few surprise guests” promised by the American Freedom Tour (IT IS NOT A TOUR!) website to bring something to sell, offering more in-depth sessions and software, a la past pitchmen whose wares have failed to deliver the windfalls frustrated attendees anticipated. Yes, you get to feel whipped into an entrepreneurial fervor by Red State-approved celebrities and Christian motivational speakers, but you might also get lured into purchasing costly advice and materials that can fail to live up to the onstage hype! What a deal!

It’s doubtful that appearing at the American Freedom Tour (again, this is not a fucking tour, they just used their name to mislead you about this being a tour, which is both conniving and insultingly stupid) will help us predict Lahren’s uncertain future in the wake of coming out as pro-choice, getting fired by The Blaze and then suing The Blaze over her removal from the airwaves. These events tend to put stacks of cash in the wallets of retired politicians and other figures likely to impress Republicans, and it’s not like Lahren has much else to do after being taken off her show.

Still, if you’re desperate to keep up with Lahren’s ongoing saga and you’ve got $49 to blow, you could always check out the event and find out what, if anything (probably nothing), she says about her plans, or any details regarding the lawsuit, or more information about Lahren’s surprising pro-choice statements. Honestly, though, your best bet would be to abandon any hope for the reveal of anything fun, and just hope that crowd won’t be subjected to her galling opinions on matters concerning race, which are not at all ameliorated by her seeming open-mindedness when it comes to the bodily autonomy of women.

But, on the other hand, even if Lahren’s speech is a letdown, there’s still that George W. Bush impersonator. Oh, and all those can’t-miss investment lessons, too!