Last Call At The Elbow Room. 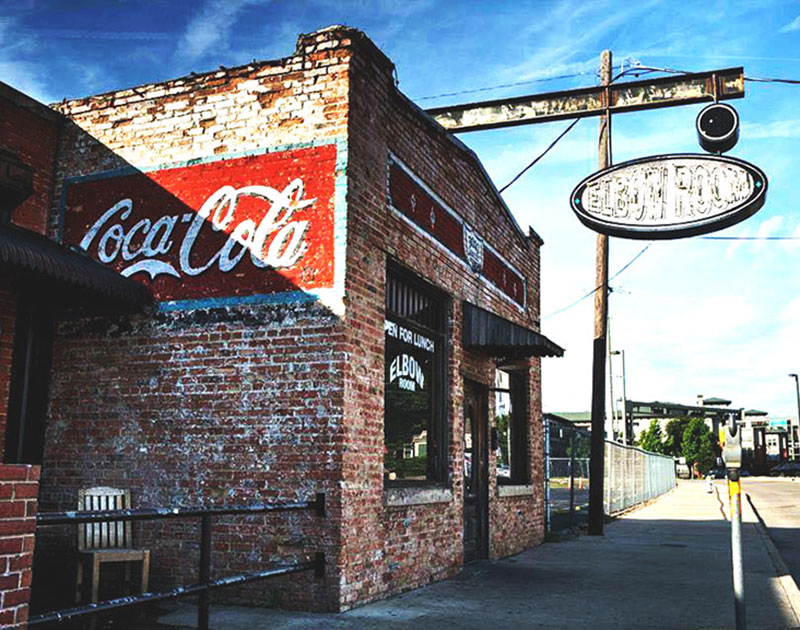 After Losing Its Eminent Domain Fight Against Texas A&M, East Dallas Dive Bar Elbow Room Will Pour Its Last Drinks On Saturday. Well, In Its Current Home, At Least.

The third-to-last night at the Elbow Room didn’t feature too many tears. But that’s not to say a somber mood didn’t linger over that familiar brick building on Gaston Avenue last night.

No, the bar’s unavoidable-at-this-point fate — that this neighborhood spot, which has existed here for decades, will be throwing its final hurrah on Saturday, April 15, as owners formally shutter operations and prepare for their building’s end-of-May bulldozing so that this land can make way for a new Texas A&M dental school — guaranteed that sentiment. 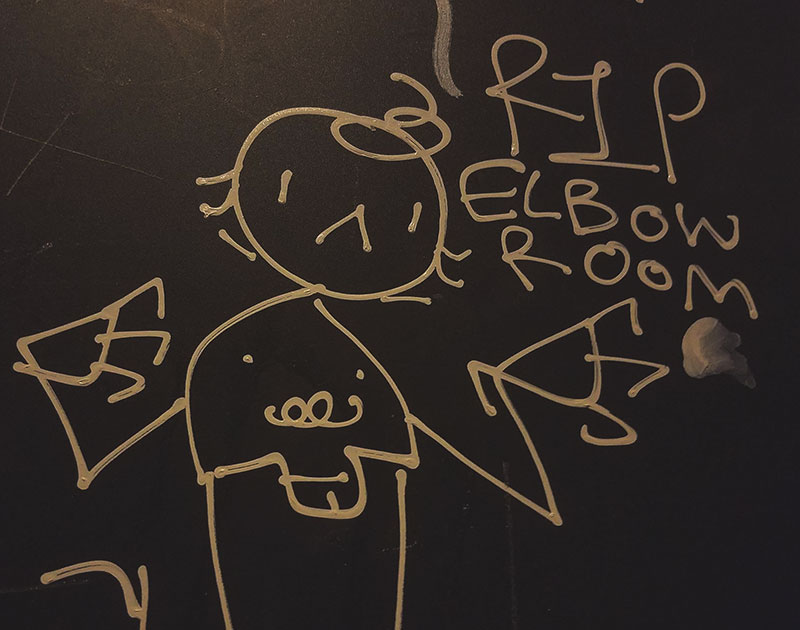 Also not helping matters? Signs of the adored spot’s impending demise were everywhere you looked. In the men’s room, just above the urinal and next to a Tony Bones tag, someone had scribbled the words “R.I.P. Elbow Room” in Sharpie. Behind the bar, a paltry inventory of booze lined the shelves and plastic cups covered the beer taps. Phones, meanwhile, seemed permanently on camera mode as patrons snapped off some final visual grabs of their favorite murals on the back patio. Hell, you could hear the sadness. Over in the ancillary room that’s only opened when crowd sizes demand it, the bar’s well-attended final quiz night, hosted by Geeks Who Drink, featured teams named “Fuck Your Dental School” among other Texas A&M slams. Between rounds, breakup songs blared over the speakers as bartenders passed out free vodka shots, interrupting their generosity only when they’d grab the quizmaster’s mic to share remembrances or launch into “Elbow Room forever!” cheers.

One can only imagine the emotion that will fill the space come closing time on Saturday night/the wee hours of Sunday morning. You’d have to assume that it won’t feature the laugh breaks that came on Thursday, as a tie in the quiz’s final standings was broken by a dance-off-turned-striptease, much to the delight of every onlooker in the building.

Taking that uproarious scene in, Elbow Room owner Rosie Nagy could only shake her head and smile. She and her husband, a doctor at Baylor, bought this bar in 2013 to save it from the exact kind of closure that it now faces. But eminent domain is a cruel bitch — emotionally, even, when you factor in the fact that the claim on Elbow Rooms comes from Texas A&M, the same school she sent her son off to attend. 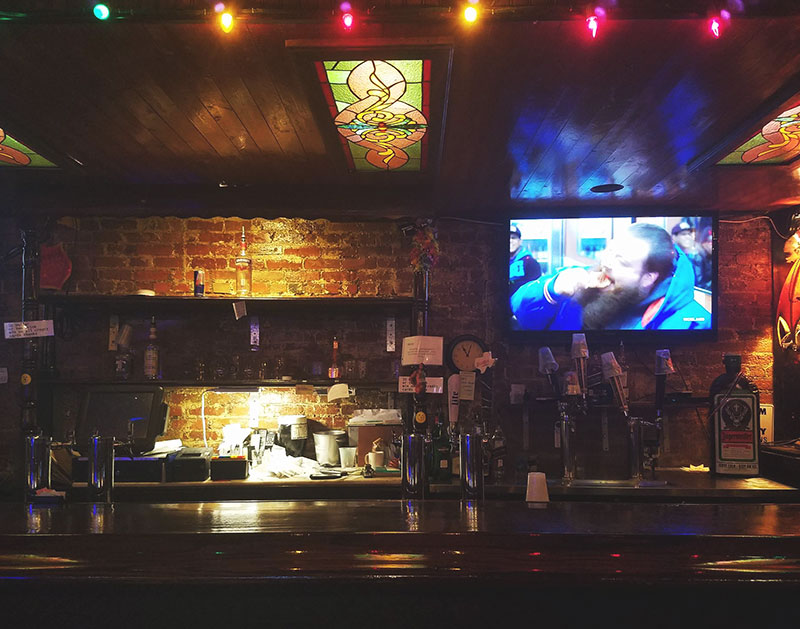 The booze is running empty at the Elbow Room.

Yes, these last few months have been pretty rough going for Nagy, and not just because irony is also an asshole. Thursday was very much an exception for her; Nagy almost never comes by Elbow Room any more. It’s too emotionally draining, she says. She’s been publicly battling this since at least last July, when it became clear that Texas A&M was both eyeing the land upon which her bar sits and announcing that it was willing to use eminent domain as a means to snag it away from her. But the process has gone on far longer than that — for at least 16 months, she says. And it’s been a drag the whole time: Ever since the threat of losing her bar came into view, her days have been filled with all the crap that comes with such a daunting fight — meetings with lawyers about how to challenge the eminent domain claims, meetings with real estate agents about new homes where she could conceivably move her bar, and almost constant discussions with everyone else in her life about… well, all of that other stuff.

It’s been a learning experience, that’s for sure. Actually, it has been ever since she bought the place four years ago.

“I’d never owned a business, much less a bar, in my life,” Nagy said over the phone last week, driving home from dropping yet another check off at the lawyer’s office. “What I learned is that it’s just a totally different world. It’s a culture unto itself. I really loved it and enjoyed running this bar. It was a lot of hard work, but it was all worth it — right up until it got taken away.”

She can only talk about it for so long before her eyes begin to well up and a frog takes over her throat. Nagy’s proud of what she’s done here, having taking the business out of bankruptcy and into the black. And, for helping her get there, she says she’ll immensely miss both her staff and her regulars — of which there are a ton, be they neighborhood first responders, medical personnel from the very nearby ever-expanding hospital complex that’s snagging her bar’s property or just neighborhood folk who enjoy the low-key vibe. Their love for the Elbow Room is palpable in more ways than in just their patronage.

“I’ve had guys at the bar just open up their wallets and offer me money right there,” she says.

Each time, Nagy’s refused. Mostly, she feels like she owes something to these people, and not the other way around. While she’s entertaining their offers to buy their favorite paintings or bar stools or even front door and the physical bar itself, but she’s also weighing the notion of just putting it all away in storage. Although a clause in her lease argues the opposite, she hasn’t giving up on the idea that her lawyers might be able to squeeze out of Texas A&M the $300,000 she’d need to cover the costs of closing up shop — her lease, she says, still had seven years left on it, plus two options for five more years after that. She figures that’s gotta count for something. And, although she’s less optimistic these days about finding a nearby new home for the Elbow Room, she’s still holding out hope that she might find a new address where she can keep the bar’s legacy alive. That’s the only avenue she has left — and, just in case, she plans on hoarding the bricks that will pile up once the demolishing begins, maybe for a mural at the new place should it ever arrive.

“The Elbow Room building is such an iconic one,” she says. “It’s incredibly sad that it’s going away. But maybe we can move. I’d been telling my staff for months and months and months that we had a new spot lined up, but that keeps falling through. So I don’t know the answer about [our ability to move], and that’s the really sad part.”

If there is a new home to be found, Nagy’s staff is ready to move with her. Leslie Cash, who has worked on and off at Elbow Room for seven years and is now one of its managers, says she’s looking for another place to tend bar at the moment, but that she doesn’t even want to think about any other job as a permanent one.

“I love this place so much,” Cash says. “It’s more than just my home away from home. When I come into work, it’s more like coming home at the end of the day.”

Cash and Nagy both expect to be emotional wrecks on Saturday night, even as while saying they hope the last night at Elbow Room feels far more like a party than a funeral. Another manager, Matthew Louzau, is hopeful that this will be the case.

“It’s going to be like the Fourth of July, Christmas, Halloween and St. Patrick’s Day exploding in people’s faces all at once,” he says. “We’re putting up every decoration we have, we’re gonna have karaoke and we have the entire staff working. We just want to be good to the people who’ve been so good to us for the last 30 years.”

They’re going to put in one last final booze order just for the occasion. And Nagy will be right there too, fighting back tears once again.

But she won’t be there to admit defeat. Not anyway, yet.

“I have not given up on the Elbow Room,” she says. “I have a feeling we can still do something.”

Cover photo via Elbow Room’s Facebook page. All others by Pete Freedman.