Forechecking: Will The Stars Make The Playoffs? 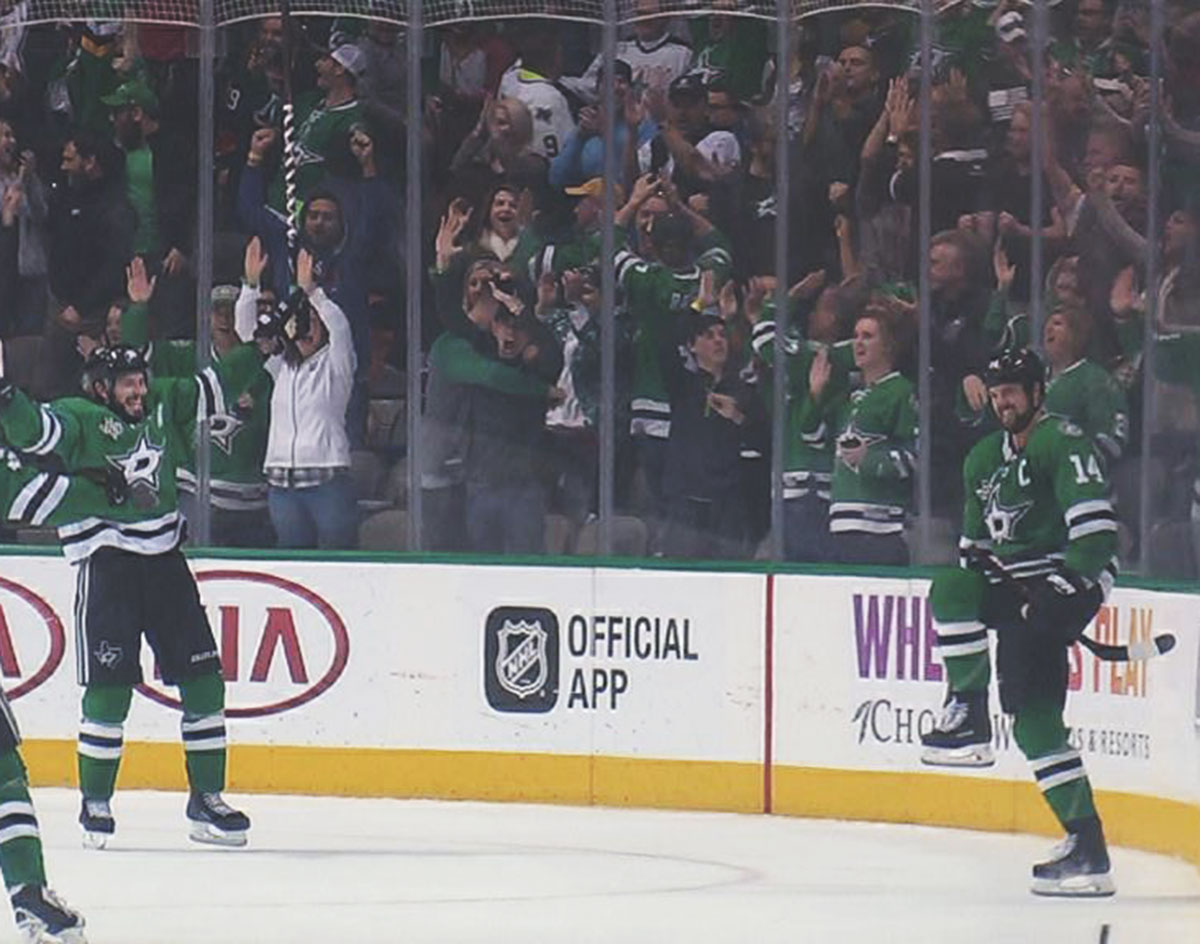 Your Dallas Stars Are Fighting The Good Fight And Getting Points Where They Can. But Will It Be Enough To Get Them Into The Second Season?

Your Dallas Stars took advantage of their last significant home stretch of the season last week before heading out on the dark and twisted road against some really big meanies this week.

They took five of six points against some desperate squads during that stretch and, in turn, managed to stay in the playoff conversation. They needed that kind of performance, too: Despite the fact that the Stars have the ninth-highest point total of any team in the NHL to date this season, they’re currently only slated as the second-to-last team in the playoffs in the Western Conference because of the weird way NHL playoff seeding works.

But, hey, they’re hanging tough out there. A different hero every night, the Stars are still showing fans that they’ve got the right stuff. How so? Well, let’s review the week step by step and get you all set before the game tonight. Is that just shameless promotion from your friends at Forechecking™? Call it what you want, but we’re having fun.

• Victory Green™ versus Calgary Flames, 2-0.
Who woulda thunk that Your Dallas Stars would be battling stick-throwing Glen Gulutzan‘s Calgary Flames for a wildcard spot this late in the season? Not us! But, here we are. Goalie Ben Bishop was unquestionably the first star of the night. Sure, his 38-shot shutout was impressive on paper, but it was more the nature, timing and quality of those stops that made for this showing being particularly A-plus. Dallas definitely loses this game without Bishop’s heroics. Although Tyler Seguin did net a beauty on the power play, the team still went one for six on its man advantages, and coach Ken Hitchcock has not been impressed with the special teams unit allowing a gaggle of chances in their own end. Despite the poor performance from Dallas skaters in this one, the glass is always half-full when you win. Speaking of optimism: Devin Shore made solid plays all night with some excellent defensive coverage and great patience on his game-winning goal, which ended a scoring drought that had eroded the confidence of the speedy winger. Also: Remember when Gulutzan was promoted from the Texas Stars’ benchboss to head coach of Your Dallas Stars from 2011 to 2013? The young coach was not nearly as animated as he is now with the Flames. On the Seguin goal, he pantomimed Brett Richie doing what he does best (making a mess of everything) before telling the ref, presumably, to shut up.

Doesn’t matter what the Flames throw at him, @Benbishop30 has been an absolute wall tonight. #GoStars pic.twitter.com/4DkX4Dh6ST

• Loser Point versus Tampa Bay Lightning, 4-5 (OT).
Sure, the Lightning are an impressive team, boast a league-high 228 goals for (compared to Dallas’ 186), the best goal differential at 56 (compared to Dallas’ 22) and would win the President’s Trophy for best record if the season ended today. But Your Dallas Stars played the Lightning down to the wire and succumbed to some silly puck luck in overtime. Hey, that’s a point! And a point this time of year is worth it’s weight in, well, points. The Stars entered the third trailing 4-2, and some fair-weather fans in the AAC decided to vacate their seats before the comeback commenced — for shame! Bishop had another soft outing against his former squad, but was rescued by the efforts of his team’s deep bench. First, Brett Ritchie’s one-timer brought the game to within one on an excellent forechecking™ effort by his linemates. Then Mattias Janmark’s game-tying tally capped one of the most bizarre sequences we’ve seen this year: Prior to Janmark firing the puck, a mysterious gremlin must have interfered with the play clock, seizing the countdown under 30 seconds for what seemed like an eternity; the goal then went under review to see if the clock malfunction caused the game to go longer than regulation (it didn’t) and if Tyler Seguin’s dogged pursuit in the crease was goalie interference (it wasn’t). And so the game went to OT, where the Stars got the better of the chances but succumbed to a breakaway by Lightning bug Cory Conacher, who somehow managed to deflected his own rebound off the backhand while being dragged to the earth by Jamie Benn. It was a goal, and the Stars lost, but not without that dadgum loser point.

• Victory Green™ versus St. Louis Blues, 2-3 (OT).
After Antoine Roussel dropped the mitts in the first shift of the game, we all thought this was going to be a barnburner in Dallas on a Saturday afternoon. Alas, it was anything but. In a game best described as “untidy,” Dallas and the free-falling Blues traded mostly benign scoring chances in a slop-fest of uncertainty until the game immediately was ratcheted to 100 once the Blues took the lead with 7:17 left in the third. Suddenly, your bois decided to put in effort in the comeback attempt that proved entertaining and all kinds of agressniff. Devin Shore, still riding high off his goal a couple nights back, scored what appeared to be the game-tying goal, but was waved off on review for kicking the puck into the net. The Stars continued to swarm when finally Alexander Radulov got rewarded for an afternoon of solid attacking as he swept in a Tyler Seguin pass to knot the game at 2 and send this clunker to overtime. Then, cue the captain, whose 12 game goalless drought got snapped — along with his twig in the celebration — to eek the Stars farther from the Blues in the standings and instill confidence in a team about to stare down the devil the last month of the regular season.

The shot, the jump by Seguin, the broken stick, the win. So much greatness in one video. @jamiebenn14 gets the @EASPORTSNHL OT winner. #GoStars pic.twitter.com/Pb2UmRdDoa

Tyler Seguin has been putting in the work for Your Dallas Stars, and is being rewarded for his 200 foot game. His six-point effort on the week paced the team, and he’s now on a five-game point streak while logging heavy minutes — north of 22 a night. He’s also won 38 of 52 faceoffs for the week and is displaying a tenacity of a leader who’s well aware of his team’s situation in the playoff hunt. The Stars’ waffling 19th best power play would be completely lost without Segs, who has done his best to carry the load during Jamie Benn’s extended drought.
The onetime Boston Bruins throwaway now has 34 goals (good for fourth in the NHL) and is +11 — a stark contrast to last season’s 26 goals and -15 totals. Tyler Seguin is the Jordan Knight of your Dallas Stars, parading around a pop-up carnival with baggy oversized clothing, awkwardly hitting dance cues with his friends while singing aggressively suggestive songs in pursuit of the hottest-sequined carnie in the midway. Our officially licensed Dallas Stars hats are off to you, Young Tyler. Your tight non-AutoTuned harmonies are keeping this team’s playoff hopes alive.

Your Dallas Stars really need to beat up on the few weak opponents left on their calendar if they want to secure their ticket to the big dance. Can they do it against this week’s foes? Let’s see!

Ottawa Senators at Dallas Stars.
Monday, March 5, at 7:30 p.m.
The Sens are really packing it in this year. Spezza’s old team has been languishing in the Atlantic basement for months. So let’s keep ’em there.

Dallas Stars at Nashville Predators.
Tuesday, March 6, at 7 p.m.
Well, as they say, if you want to be the best, you gotta beat the best. Here, the Stars take on the Central Division’s top dawg — and on the road, no less. So let’s beat ’em.

Anaheim Ducks at Dallas Stars.
Friday, March 9, at 7:30 p.m.
The persistent and angry Ducks swarm Dallas while clinging on to third in the Pacific. Corey Perry and company are not to be taken lightly. So let’s not do that.

Dallas Stars at Pittsburgh Penguins.
Sunday, March 11, at 6:30 p.m.
The Stars have to close out a tough week with Sydney Crosby and the defending Stanley Cup champs gearing up for yet another playoff run. So let’s hold on to our butts.