Forechecking: The Stars Beast Over The East. 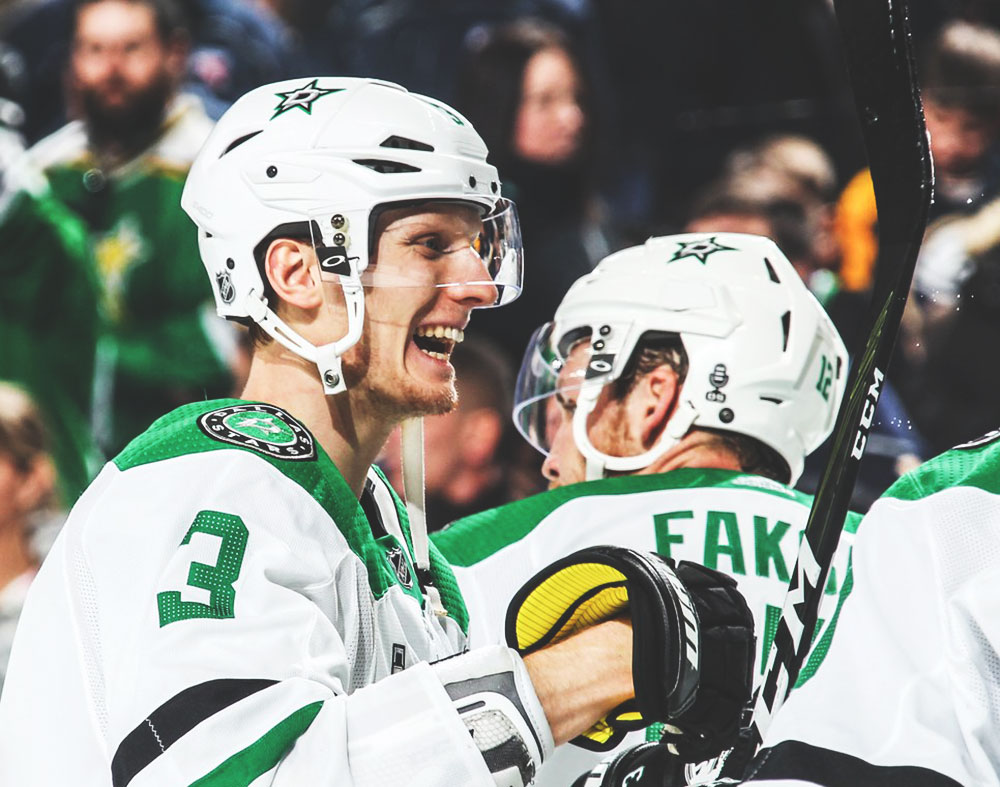 Led By Stellar Play From John Klingberg, You Dallas Stars Laughed In The Face Of Its Eastern Conference Road Trip Last Week.

Your Dallas Stars sure used up their carbon credits this week, playing four games in four different cities. But, beyond lots of travel to exotic eastern climes, that also meant opportunity knocking — and the boys in Victory Green™ answering.

Yup, Dallas racked up seven out of a possible eight points against the Leastern Conference this week — and that ain’t nothing to front on, especially considering that they did so in especially convincing fashion.

• Victory Green™ at Boston Bruins, 3-2 (OT).
The Stars outpaced the Bruins in the first with a shoot-first mentality, ringing up 11 shots to the Bruins’ one midway through the first. Stephen Johns would score with a great shot over the blocker of Anton Khoudobin after a nice give and go off a turnover from center ice. Not to be outdone, Alexander Radulov followed up a Jamie Benn shot on net during the faceoff and slammed home the rebound with his backhand. It was a great, heads-up set play that reminded us of how Mario Lemieux used to work the dots to not necessarily win, but to score. Credit to the Bruins, however: They stuck with it and slowly chipped away at the Stars two-goal lead to sent the game to overtime. And, oh boy, what an overtime it was! John Klingberg got boarded in the Bruins’ end, drew a call, maintained possession of the puck and allowed Dallas to spring an extra man for the pseudo-power play. There’s no point in trying to describe what happened next, let’s just cue that damn Tyler Seguin GIF!

• Victory Green™ at Detroit Red Wings, 4-2.
If we were told that the Wings’ Trevor Daley would light the lamp just 41 seconds into the game, that Ben Bishop would sloppily perform one of his weakest efforts as a Star, and that none of the Stars’ Big 3 would score — and all in a road game, no less — we’d have put some money down on a Stars loss. Instead, the Red Wings only managed 15 shots on goal and largely looked ineffective in their shiny new $950 million dollar arena. A fresh and fiery Jason Spezza — a healthy scratch just one game earlier — notched two goals in his first multi-goal effort since 2016, and the Stars cruised past the middling Red Wings. The beauty of scratching a veteran is that the coach looks like a genius whether the player performs better (it sent a message!) or if they continue play poorly (see, he had every reason to keep him out of the lineup!), but we’re glad to see it was the former as Spezza’s secondary scoring will be crucial down the stretch for this team. On the other hand, it’s almost sad to see the Red Wings floundering about with no real direction after decades of dominance. Almost.

Radulov finds the opening and Spezza takes care of the the rest. #GoStars pic.twitter.com/qHSbmelDwz

• Loser Point at Columbus Blue Jackets, 1-2 (Shootout).
Former Dallas draftee Jussi Jokinen made his Blue Jackets debut here after being waived by the Oilers. And  former Blue Jackets draftee Dillon Heatherington makes his NHL debut. Fun! But the big story of the night was goaltending. After a lackluster first period, Dallas stepped up its efforts against Joonas Korpisalo — but only managed to slip one legal goal past the backup netminder. Ben Bishop made 26 saves, including a highlight reel glove grab that secured Dallas a point and sent the game to OT. Fortunately, despite a Radulov penalty in the extra frame, Columbus wasn’t able to capitalize until the shootout where the super slick Artemi Panarin backhanded the game-winner to give the injury-riddled Blue Jackets an unlikely win. In his post-game interviews, coach Ken Hitchcock was not pleased.

Tied 1-1 with 30 seconds left in regulation and Ben Bishop comes up with this beauty. #GoStars pic.twitter.com/R2Zu1u9K8V

• Victory Green™ at Buffalo Sabres, 7-1.
What more could you possibly want in such a lopsided Victory Green™? Kari Lehtonen backstopped the Stars to arguably their most dominating performance of 2018 in this one. Yeah, the Sabres are languishing near the bottom of the Atlantic division. But so what, who cares? You gotta beat the bottom feeders to make the playoffs! A total of 13 different Stars registered at least a point in the effort, led by Mattias Janmark’s pair early that set the tone in this matinee tilt in Buffalo. It wasn’t all good news on Saturday, however, as the Czech Glass Man Martin Hanzal left the game with yet another “lower body injury.” Shrugs.

Mattias Janmark always keeps the skates moving, and having a shot like that certainly helps. #GoStars pic.twitter.com/FvEvGuOUc2

For the second week in a row, ya boi Lil John Klingberg is our player of the week. Still, he dark horse pick for the Norris Trophy is getting zero love from the lamestream media that’s stuck in its East Coast bias ways.

Will one of these guys take home the Norris Trophy? #NHLTonight pic.twitter.com/UEqlD5fNZi

LMAO, Seth Jones and Morgan Riley? L. M. A. O. Klinger boasts a 10-point lead over all other defenders in scoring after notching seven more points this week — oh, and he was a +4 in that stretch. Points aren’t everything? True, but critics obviously aren’t watching the Swede play. His calm demeanor in the defensive zone alongside Esa Lindell has led to efficient back-end play unlike anything we’ve seen around here since… well, I won’t say who, but I think you know who I’m talking about. Anyway: Klingberg is an NHL All-Star once again, and an All-Star in our hearts, and without Klinger your Dallas Stars would be in the conference toilet right now. REAL TALK.

Toronto Maple Leafs at Dallas Stars.
Thursday, January 25, at 7:30 p.m.
Ever wondered why they’re not the Maples Leaves? It’s kind of a boring answer.