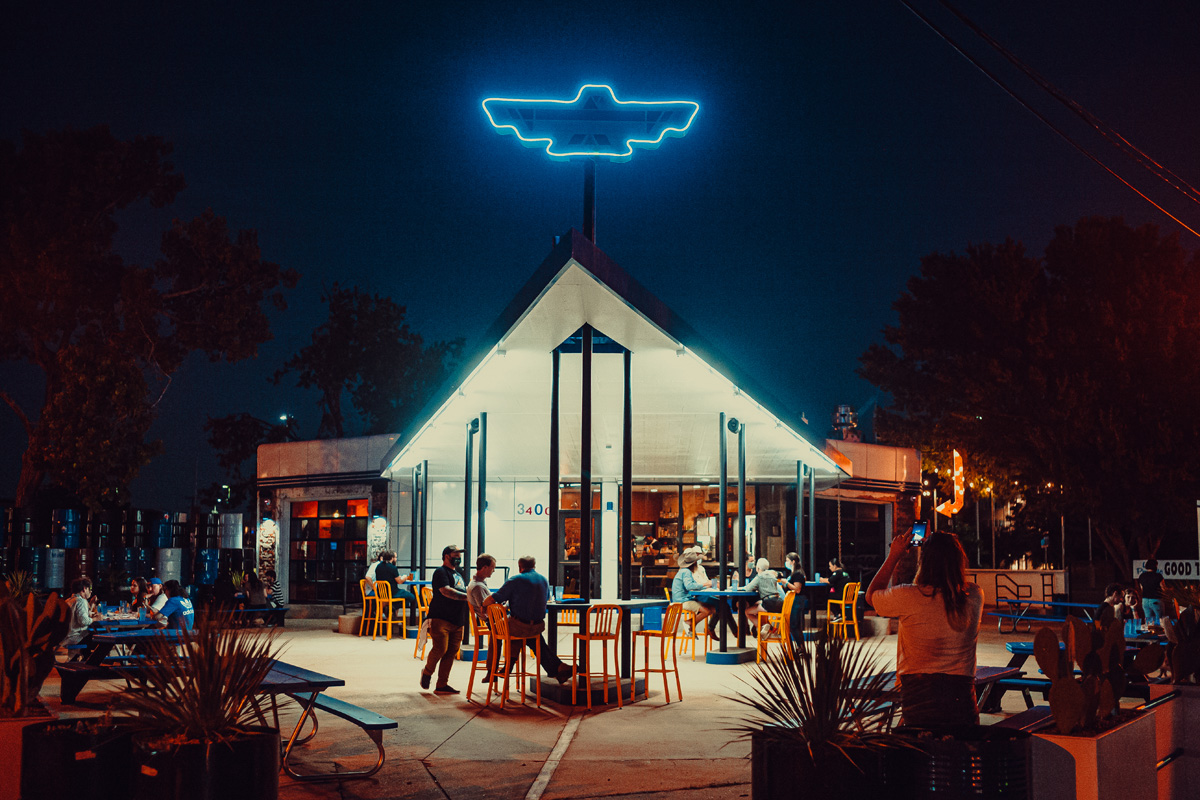 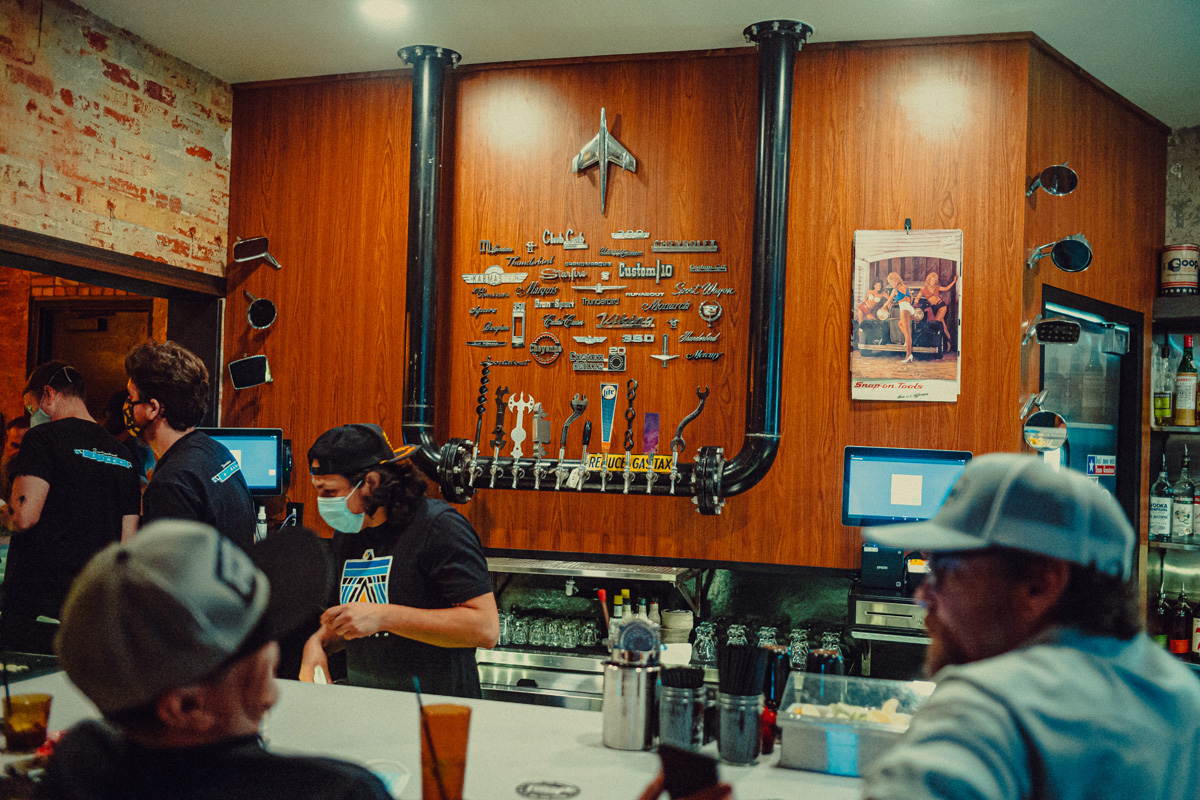 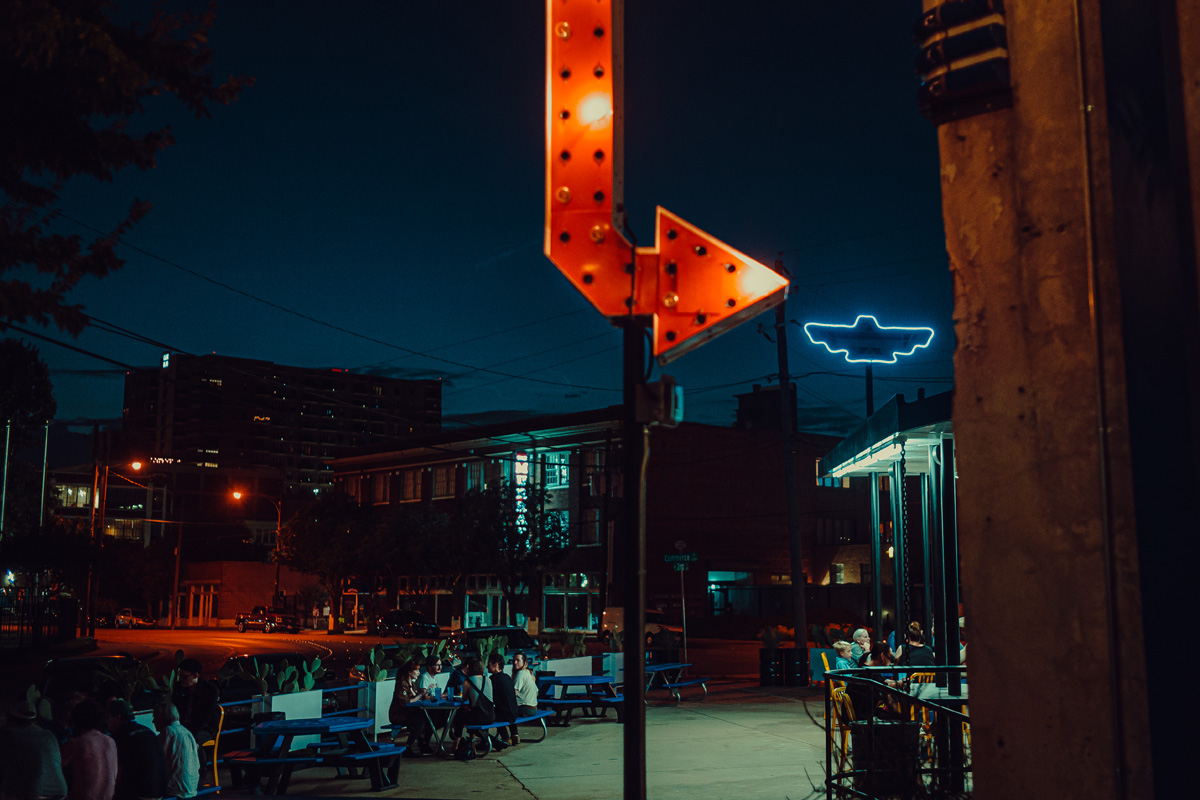 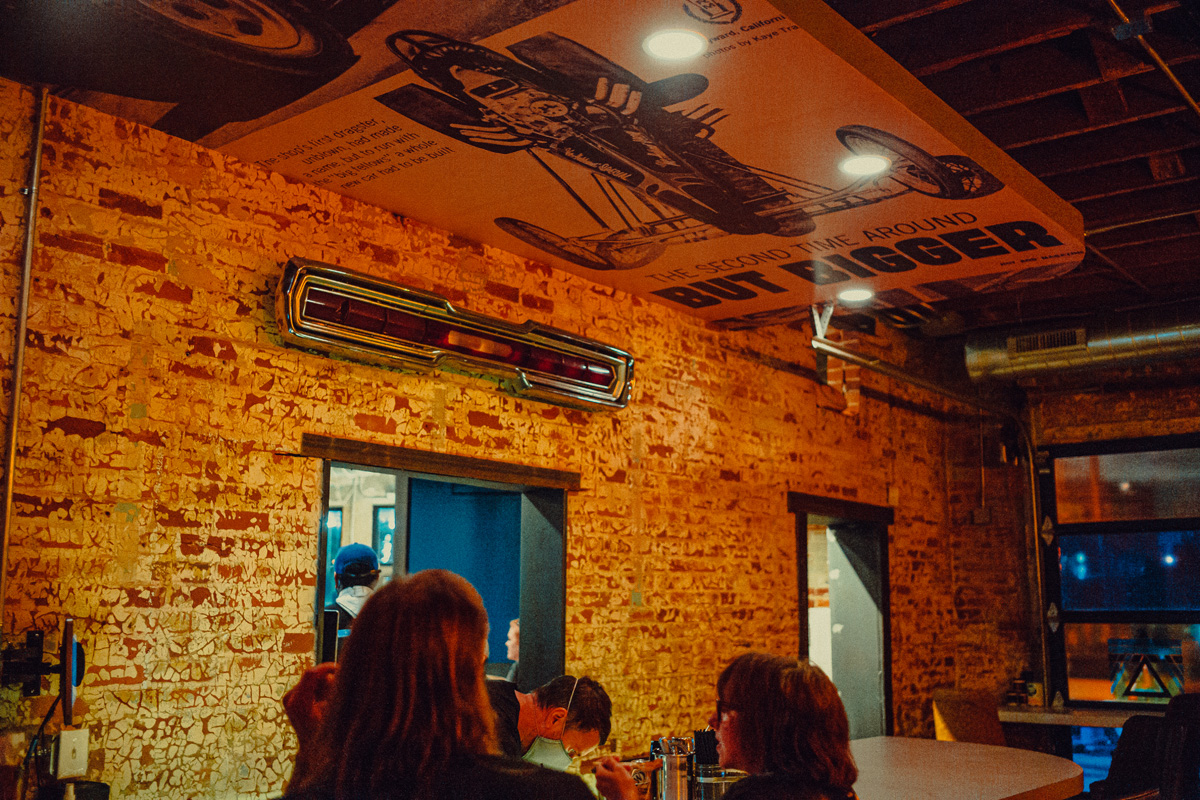 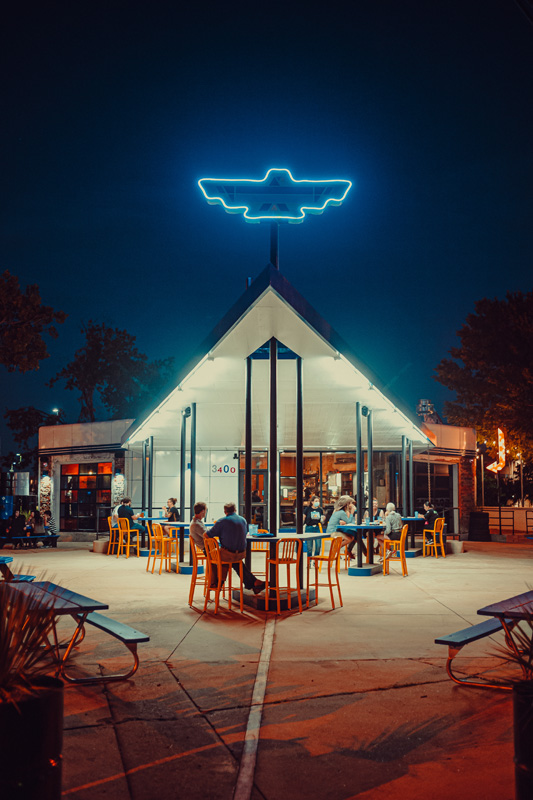 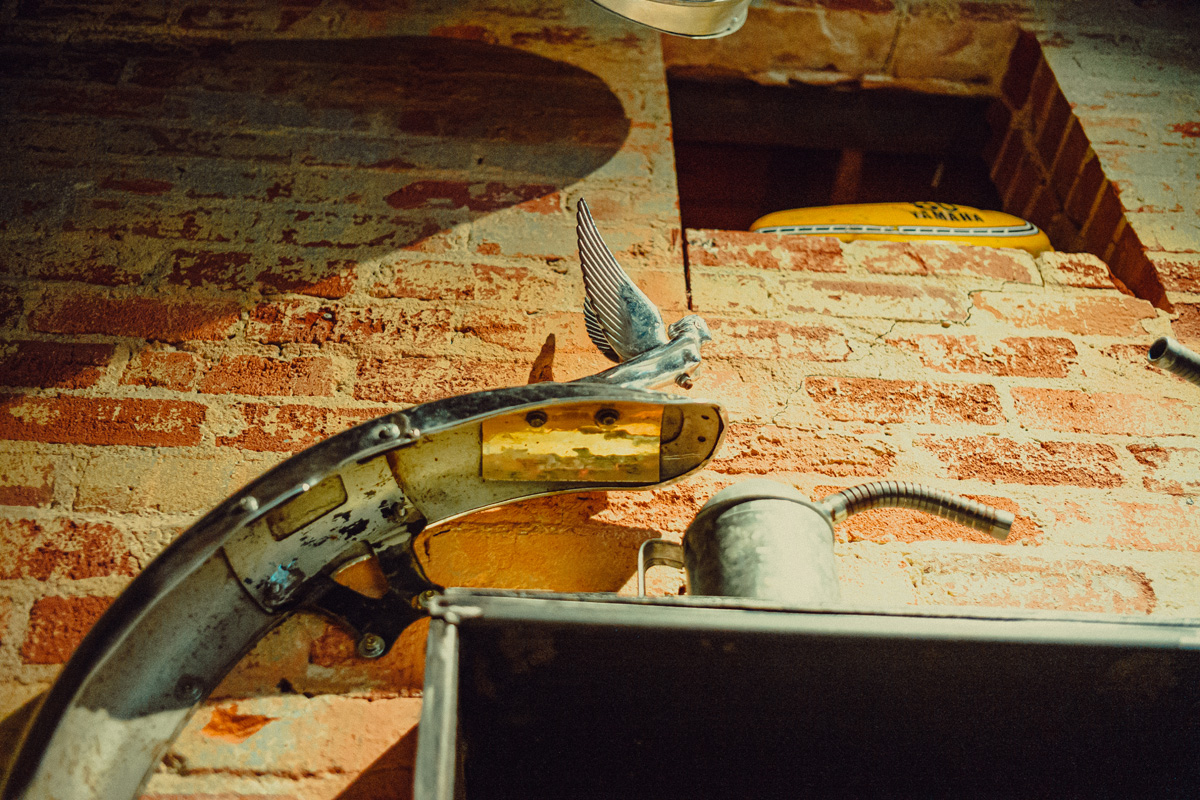 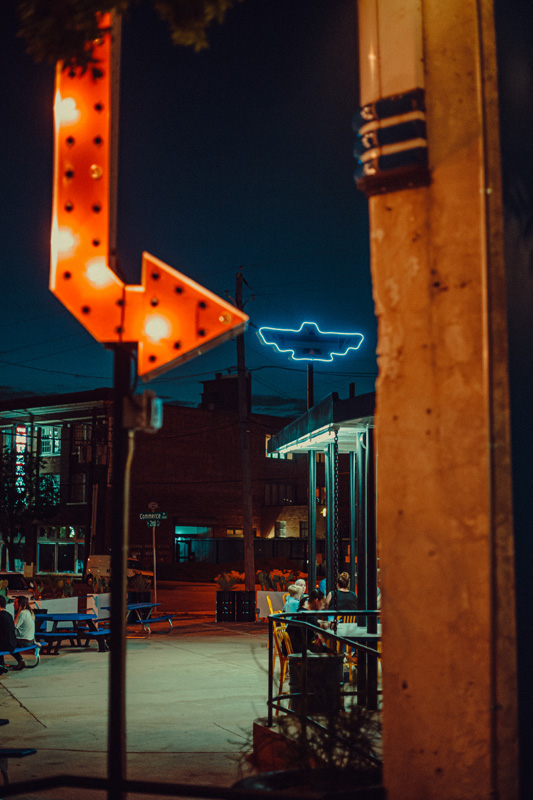 The New Kitchen-Boasting Concept From Bar-Owning Icon Kim Finch Is A Retro, Socially Distant Oasis Located Just A Stone’s Throw Away From Her Beloved Double Wide.

The owner behind Deep Ellum’s beloved Double Wide — and its sibling bar Single Wide down on Greenville Avenue — is spreading her wings with a new neighborhood spot called Thunderbird Station.

Juggling the state-ordered shutdown of bars was a project in and of itself for Finch these last few months, putting her initial plans of opening her new spot by Spring 2020 on ice. Now, just in time for Texas Gov. Greg Abbott’s latest loosening of restrictions on area restaurant capacities, she’d ready to finally rev her new Thunderbird Station’s engines.

And not a moment too soon, either: Finch says she’s had her eyes set on the 1920s-built auto service and former Gulf gas station space since she started operating her across-the-street drinking destination The Double Wide around the same time the property at 3400 Commerce Street first became vacant in the early 2000s.

“I wanted to open a place that had nostalgic food that I felt like I couldn’t get anywhere in Dallas,” she says of her long-gestating plans.

That’s exactly what Thunderbird Station offers too, with all of its grub reasonably priced and the most expensive plate running at just $12. Though the menu boasts slightly elevated takes on old-time southern favorites — like the jackfruit-based “Sloppy Jolene,” for instance — Finch says she didn’t want anything “over-fancified” on her menu.

Just a few days into Thunderbird Station’s soft opening, its fried bologna sandwich (featuring meat from Rudolph’s Meat Market just around the corner) is already looking like a hit. It’s served with a side of Lay’s chips, but those can be upgraded easily to “Dirty Dipsticks,” which are Thunderbird Station’s spicy garlic take on seasoned French fries. (We suggest following the menu’s wink to further upgrade “them fries” by adding chili and cheese on top for a gut-buster of a plate.) 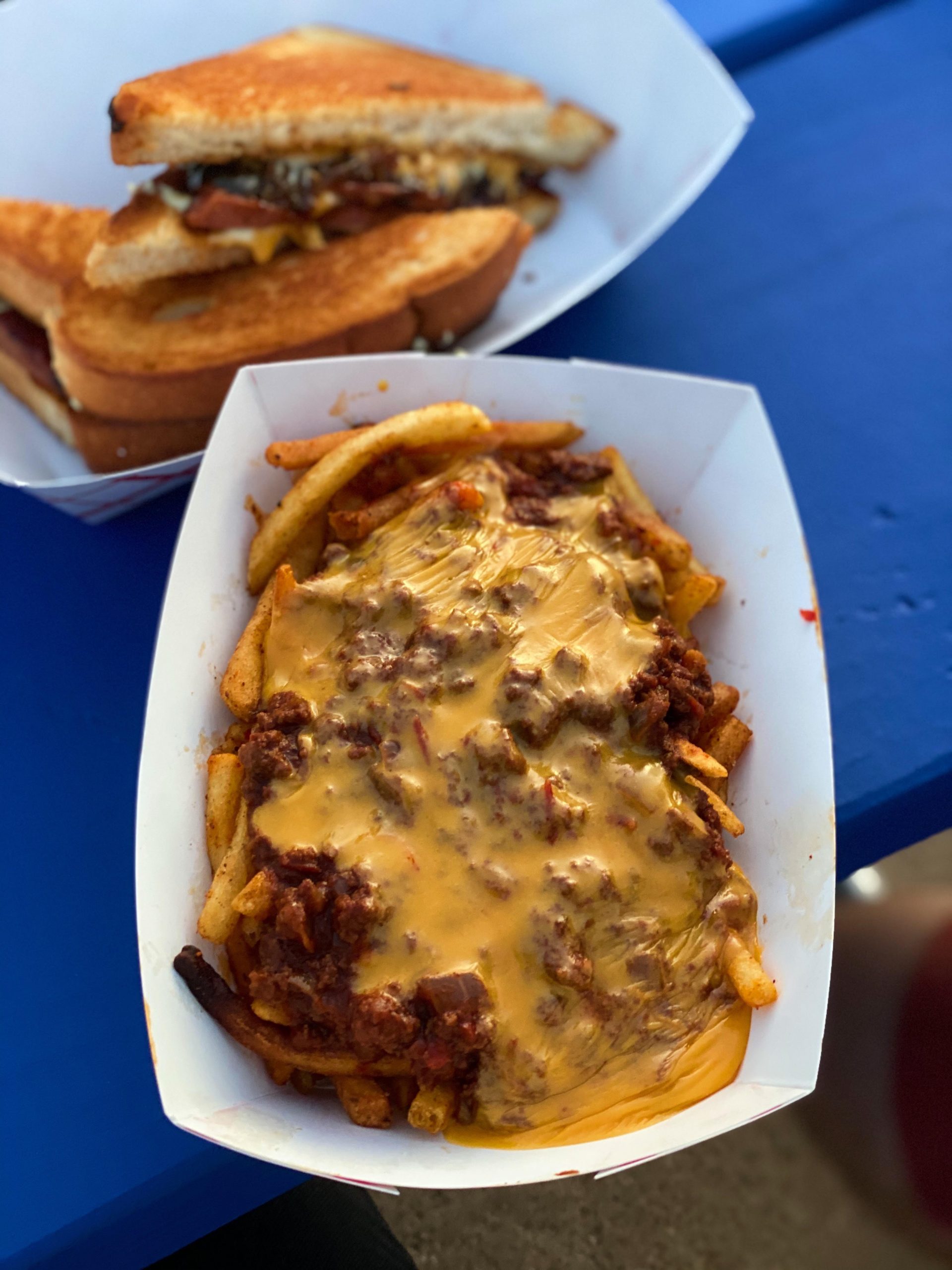 Dirty Dipsticks with a trunk load of added chili and cheese.

Another welcome sight on the Finch-conceived and Chef Jeana Johnson-tweaked menu is its inclusion of selections red hots from the Sausage King of Dallas himself, Chef Brian Luscher.

Truck-stop food influences aside, Finch wants to make it clear Thunderbird is a bar that serves food, and not a restaurant. But the beverage menu doesn’t ditch the kitsch: Classic Texas brews like Lone Star and Shiner Bock are served by draught in frosty mugs, and cans of Blood & Honey, White Claw and Dos XX are also readily available for ordering and sipping.

But the real booze driver here is specialty cocktail menu featuring nine themed drinks with names such as the “JunkYard Dog” and “Keep on Truckin’, to name a few. We particularly enjoyed the frozen option “The Peel Out,” which combines a dairy-free mix of orange, vanilla and vodka flavors for nostalgic taste akin to the Flintstone’s push-pops we so devoured during our childhood. Meanwhile, “The Fuzzy Dice” is a refreshing glass of Crush Grape Soda spiked with violet liqueurs and topped with a kiwi slice, and while it might sound like a sugar rush, it’s not overwhelming; it’s just damn good, y’all. 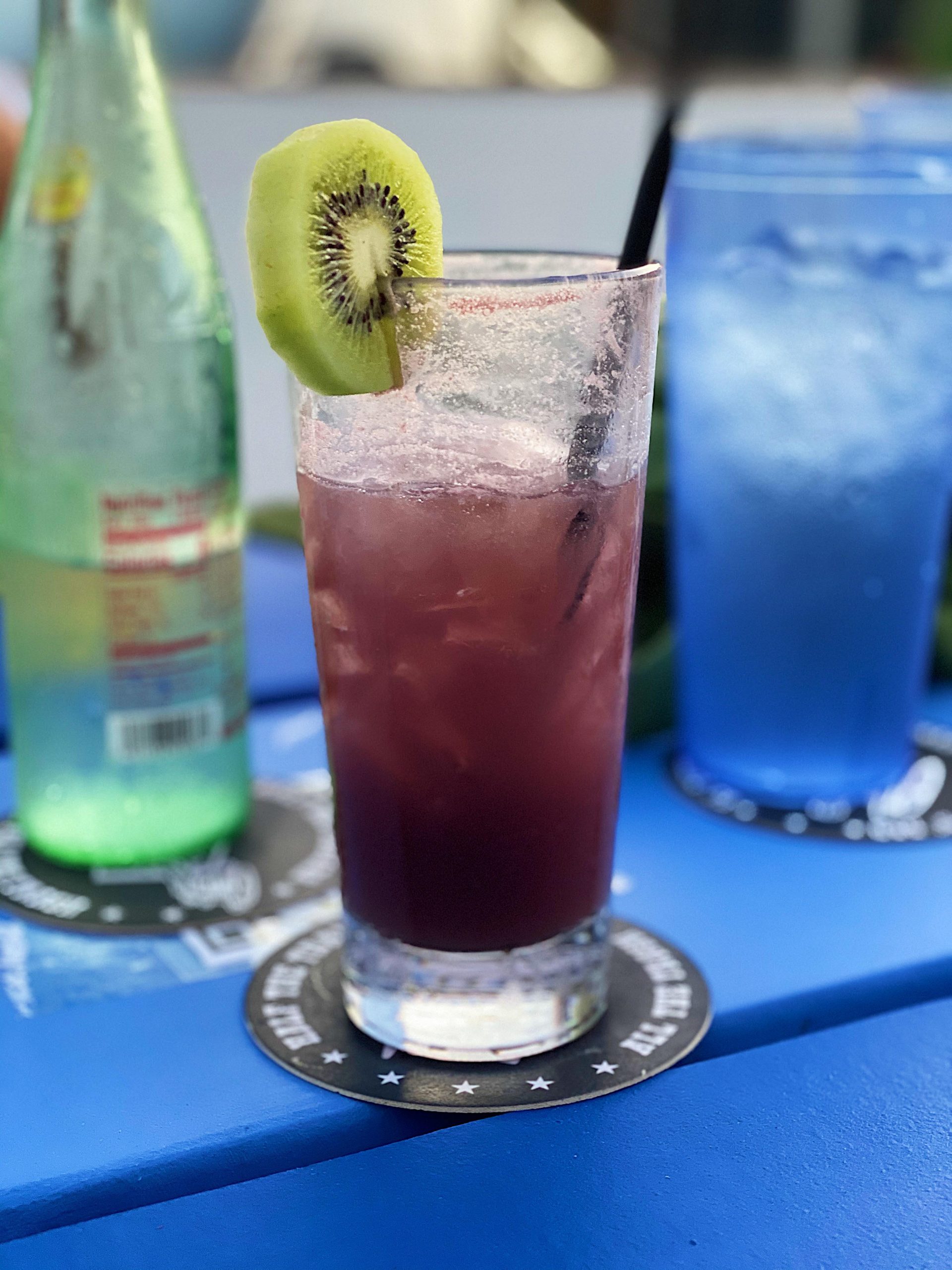 Aesthetically, Thunderbird is not too far off from Finch’s wheelhouse of brassy southern visions, just slightly higher brow. The spacious patio — practically made for social distancing — is meticulously lined with royal blue picnic tables (spread well more than six feet apart) and electric yellow chairs placed along the high-tops.

Conscious of the Texas heat, Finch also added to the building an eye-grabbing covered awning for shade that coincidentally mimics the hood of a car in how the bar’s powder blue neon sign sits atop it like a hood ornament. It’s a safe bet that we can all expect to see the Thunderbird Station’s sign to regularly pop up on every Dallasite’s Instagram Stories feeds, the concept’s many cocktail servers zipping by from table to table beneath it.

Inside, the bar is too dazzles the eyes. While most of Thunderbird Station’s footprint is dedicated to its large outdoor space, its cozy interior is tastefully outfitted with mismatched antique barstools and wood-paneling that’s been decorated with vintage car decals. The polished grit aesthetic even continues below eye level with a rustic tow chain used for a foot rest beneath the bar. Brick walls, meanwhile, lead the wrap-around bar to a secluded side interior dining area that offers access to a rear, graveled patio area with four gender-neutral single restrooms.

Thunderbird Station officially opens on Tuesday, September 22, but will continue its soft-opening run through this last weekend before then. Its hours — Finch refers to them as “COVID hours” — are 4 p.m. to midnight on Tuesdays through Fridays, and noon to midnight on Saturdays and Sundays.

The bar is closed on Mondays.

Oh, and one more bit of good news: Thunderbird Station’s arrival means Finch will soon be able to reopen her pandemic-shuttered Double Wide and Single Wide spots too. With bars now able to apply for restaurant licenses and open back up, Finch plans to offer pre-packaged meals from Thunderbird at her other spots for a little dipstick double-dip that will get her entire fleet up to code.