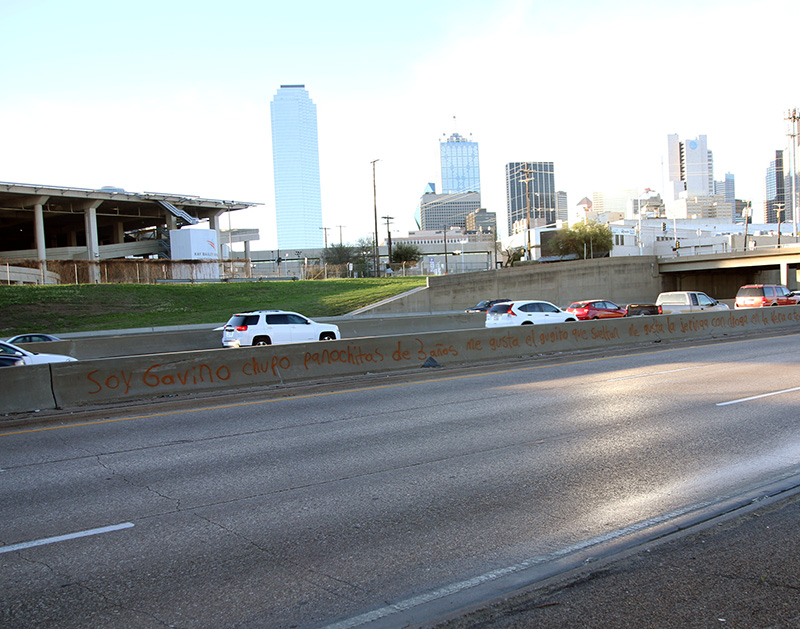 At Least Seven Cartel-Referencing Messages Have Been Spray-Painted Across Dallas Since October 2017. But An Expert On Cartel-Related Propaganda Says You Shouldn’t Worry.

Our report from last week about vandalism on I-30 that included cartel- and rape-related language yielded a slew of responses. Some folks were clearly discomforted at the sight of a message that mentioned rape while name-dropping Mexican cartels. Other readers, heeding the advice of Dallas Police, simply dismissed the message as a hoax.

But while the blue spray-painted message we reported on — located on I-30 near its Haskell Avenue on-ramp — has since been cleaned, questions linger about what it means, and who left it.

While Corporal Debra Webb of the Dallas Police Department told us that the vandalism we reported on — which listed two specific addresses in East Dallas — was related to an unnamed individual’s repeated harassment of one of the families living at those addresses, she offered little info then about the ongoing investigation other than to say that the public shouldn’t be concerned.

But, in the wake of our coverage, we began receiving messages from curious and concerned readers who said they’ve been seeing similar messages spray-painted across the city for months now. In addition to the one we covered, we can now confirm at least six additional messages popping up all around the city in recent months, bringing the total to seven:

i do but not on my phone, i have this video that was taken jan. 5th pic.twitter.com/r2ldV9yvg2

(Another reader also alerted us to an eighth message seen on northbound I-35 near the Zang Boulevard exit with similar references to a Mexican cartel and the 75217 zip code, although we have not been able to independently confirm its existence.)

Alerted to these additional spray-painted messages, DPD’s stance on the vandalism remains unchanged.

“We have no reason to believe that the graffiti depicted is actually related to any cartel or gang activity,” says Webb. “[But] detectives are actively working this case, and it remains and ongoing investigation.”

University of Texas at El Paso anthropology professor Howard Campbell, who has written about various border- and drug cartel-related matters — namely about narco-propaganda and how cartels communicate with the public — says he backs up DPD’s position.

Image via Google Maps. Image has been edited for clarity.

Image via Google Maps. Image has been edited for clarity.

Campbell says his immediate reaction to the vandalism around Dallas is that it looks like the work the work of low-level street gangs, right-wing groups aiming to stir fear about immigrant communities or an individual trying to scare someone or get attention.

“Using references [to La Familia Michoacana] and so on are used to scare and shock the people living at the address and the public,” Campbell says. “It doesn’t transcend much more than that.”

Campbell confirms that messages like these are often used in Mexico to announce that a new cartel is in town and making a play for power, either to intimidate local leaders and the public or simply to signal a change of power. Cartels sometimes even leave messages like these in which they pretend to be rival cartels so as to throw authorities off their own tails, Campbell says.

But these Dallas messages, Campbell says, don’t appear to be much more than someone aiming for shock value — even though, he adds, Dallas is indeed a major drug hub and a major activity center for drug cartels.

“At times like these, one has to be cautious about it even if it’s done by teenage pranksters,” Campbell says. “But one shouldn’t assume the end is near, either. I would encourage people not to speculate.”