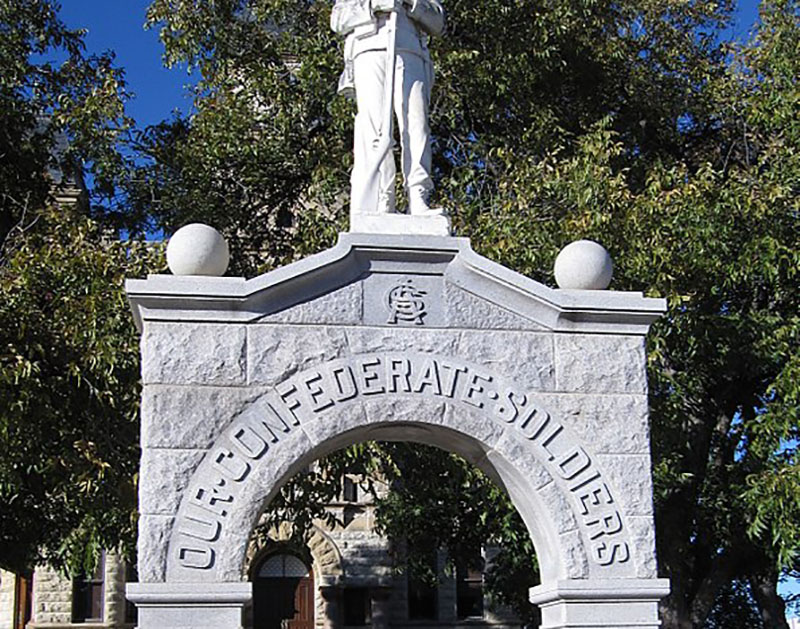 Instead Of Removing The Controversial Confederate Monument On The Square, A Committee Voted To Add A Plaque And Video Monitors — Y’Know, For Context!

Following a vote by the 15-member Denton County Confederate Memorial Advisory Committee, it’s been determined that the city’s Monument to Denton’s Confederate Soldiers will stay in place at the historic Denton Square.

The advisory committee voted 12-3 yesterday to keep the stone monument to Confederate soldiers — with the recommendation that a plaque and video monitors be added that display messages that denounce slavery and segregation.

The three members who voted against the plan — Willie Hudspeth, Alfred Sanchez and Paul Meltzer — said after the vote that they all supported adding the plaque, though they voted against the committee’s recommendation because the group did not construct a specific message.

Not surprisingly, the group’s recommendation of placing video monitors outside 24/7 immediately drew scrutiny from one local leader. County Commissioner Hugh Coleman, who is on the commissioners court that will decide how the plan will go forward, told the Denton Record-Chronicle that he was unsure about the feasibility of video monitors.

“I think having electronics out in the weather may have operational problems,” Coleman said to the Record-Chronicle. “If we do this, we want to do it right. I don’t want it constantly breaking down because it’s subject to wind, rain and weather.”

Dude’s got a point! And more power than those on the advisory committee, whose plan’s fate is contingent on the Denton County Commissioners Court approving it — or not — when it next meets on Tuesday, February 6.

Still, it shouldn’t be all that surprising that this first vote went the way it did. When the committee was formed two and a half months ago, it had three specific goals: to preserve the Confederate soldier tribute; to follow the historical preservation guidelines of the Texas Historical Commission, the National Parks Service and the American Alliance of Museums; and to follow any local and state preservation standards.

Even so, the statue isn’t super popular with everyone in Denton — especially the crowd that was hoping the college town would follow in Dallas’ steps in removing a Confederate monument.

How do we know that crowd exists? Because, y’know, college town, duh. But also because, back in 2015, two still-never-apprehended people were caught on surveillance video spray painting “This is racist!” on the monument. Oh, and then there’s the weekly protests of the monument that go down from 4 p.m. to 6 p.m. every Sunday.

We bet that contingent is rolling its eyes even harder than we are at the idea of Denton ever actually installing outdoor video monitors next to the monument to remind everyone that, in spite of what this monument is literally standing for, slavery and segregation were bad.