Daniel Bryan Cleared To Wrestle Hours Before SmackDown Kicks Off In Dallas. 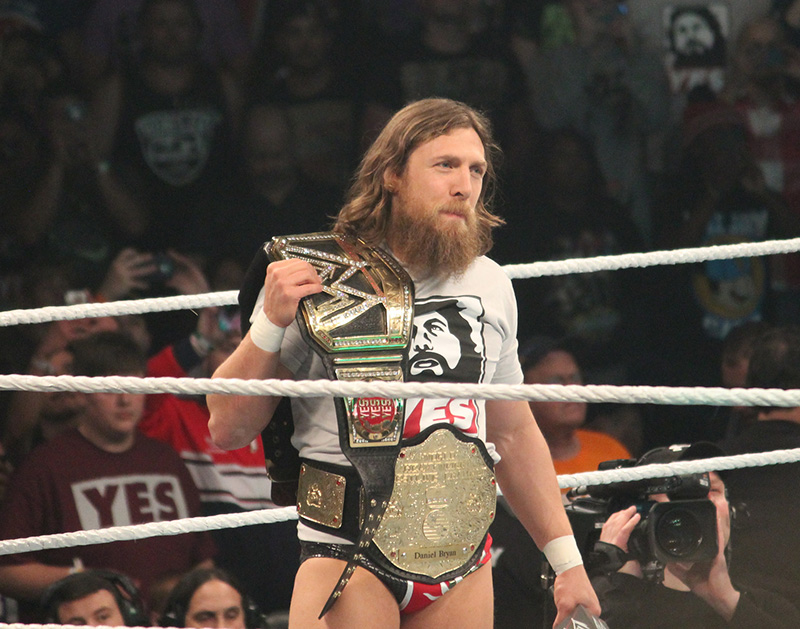 After Two Years On The Shelf, WWE Has Cleared Daniel Bryan To Step Into The Squared Circle Again — Just in Time for Tonight’s SmackDown Live Taping In Dallas.

Tonight’s SmackDown Live taping at the American Airlines Center just became a much bigger deal for wrestling fans after today’s news that Daniel Bryan has been cleared to wrestle again.

Why? Well, the live crowd in Dallas might could very well witness the return of Bryan as an in-ring performer — or at least get a taste of the potential set-up to his WrestleMania match-up.

To be fair, it wouldn’t have surprised any fans to see Bryan at tonight’s SmackDown. The guy has served as the on-air General Manager of SmackDown since July 2016, a few months after his official retirement on the February 8 taping of Monday Night RAW.

But when Bryan delivered that heartbreaking farewell speech in his home state of Washington, it certainly seemed like he was done fighting in the ring. Though his “Yes!” catchphrase was the hottest chant around and he was still capable of delivering amazingly physical performances, medical tests showed signs of worrying brain trauma that made it impossible for WWE to clear him for competition. That tearful episode came just a couple of years after Bryan captured the WWE world heavyweight championship at WrestleMania XXX. His reign was a truncated one, though, hampered by a series of frustrating injuries. Sporadic appearances then followed, and while he won the Intercontinental Championship at WrestleMania 31, he would essentially disappear from active competition for almost a full year before making his retirement official.

Still, Bryan regularly discussed the possibility of wrestling again, either with the WWE or on the independent circuit a la Cody Rhodes. But no one it to come so soon — and certainly not in time to raise the tantalizing possibility that tonight could be the first event in over two years to feature Bryan as a wrestler.

Even so, let’s be cautious here. With WrestleMania — the Super Bowl of professional wrestling — less than a month away, WWE has every reason to hold off on having Bryan return to action until then. Doing so would help guarantee that would-be viewers will tune in that Sunday, April 8, when Bryan would ideally make his big return.

Of course, what WWE could do tonight is put Bryan in a “dark match” — a bout shown exclusively for the live crowd and not on any broadcast. These matches are sometimes used to tease a rivalry or ease returning wrestlers back into action. So even if it doesn’t make sense to air a Bryan match on SmackDown, Dallas’ wrestling fans might be in for an incredible treat just the same.

All that being said, don’t snap back at us if it doesn’t happen and Bryan doesn’t wrestle tonight. We know we were wrong about The Undertaker coming back to Monday Night RAW last night, and we’re taking that lump.

It seems a pretty surefire bet, however, that even if Bryan’s official wrestling return doesn’t take place tonight, the Dallas crowd will still be able to get a boisterous “Yes! Yes! Yes!” chant going when one of the most gifted ring technicians of our generation makes his way to the ring.