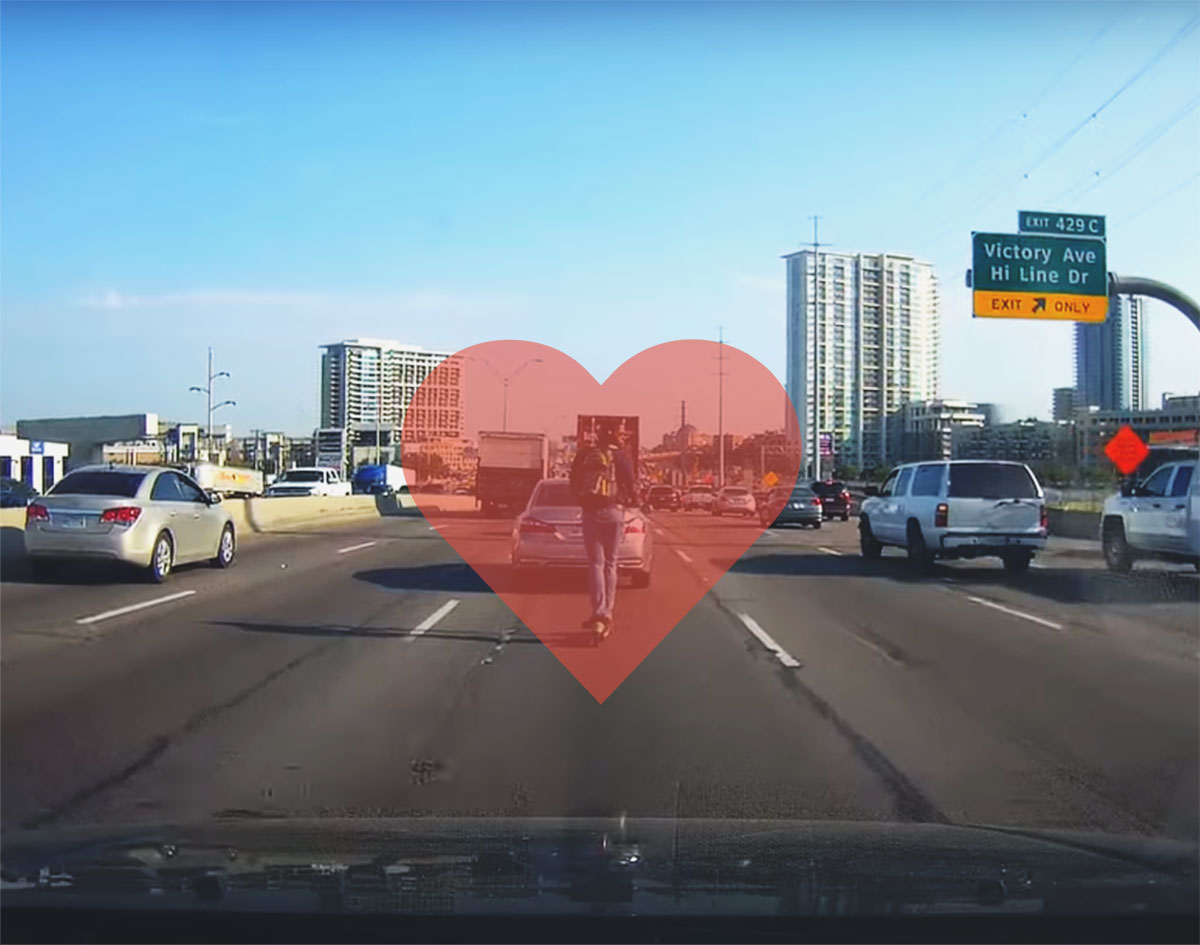 Not Only Did You Flash Impressive Skill By Crossing Five Lanes On I-35E During Rush Hour, But You Also Pissed Off Governor Greg Abbott In The Process.

Well, you sure scooted right into the hearts of Dallasites this week, huh?

Right smack dab in the middle of rush hour traffic on Intestate 35-E this past Monday morning, Dallas commuter Josh Weatherl and his car’s dashboard cam bore witness to your scooting skills — and then spread your gospel via the immediately viral video they captured of you coolly riding along the highway, right with the speed of traffic and even crossing five lanes on your electric Lime scooter all nonchalant-like in the process.

You’ve become a media sensation these last few days as a result of this display, with Weatherl’s video of your talents earning placement in various Dallas media outlets, as well as in your more traditional out-of-market publications (including the Atlanta Journal-Constitution and The Kansas City Star) and even such national online publications as Mashable and the car-centric Jalopnik, the latter of which rightly heaped praise upon your deft ability to weave in and out of traffic.

Similarly, footage of your efforts has been blasted on TV news outlets near and wide over this same stretch, and the YouTube upload of your feat near the American Airlines Center along I-35E’s northbound exit for Victory Avenue and High Line Drive has earned more than 180,000 views at the time of this writing.

It’s not hard to understand why people are interested in your story. You’re a modern-day hero, boldly going where no scooter rider has gone before — or, at least, not seen going on camera anyway.

Sure, some people are rolling their eyes at your stunt, saying that what you’ve done here is dangerous and irresponsible. To that we say, “What else is new?” Since arriving in town in July 2018, electric scooters have regularly drawn the ire of critics — and in the case of people riding scooters on sidewalks in neighborhoods where it’s illegal to do so, rightly so.

But, see, what you did on Monday morning was only kind of illegal. Since scooters top out at a speed of around 15 miles per hour, Dallas’ dockless vehicle ordinance has ruled that it’s only legal to ride scooters on city streets with speed limits of 35 mph or lower. But the Texas Department of Transportation, which oversees our state’s highway systems, has no such rule in place for its roads, and Dallas-area state senator Royce West’s efforts to get such a rule on the books in recent state legislative sessions have come up short.

So, beyond perhaps common sense violations, you didn’t really do anything wrong by scooting on the highway — at least as far as we can tell, anyway.

On the other hand, your actions have resulted in at least one thing that we believe to be quite right indeed. They pissed off Texas Governor — and noted asshat himself — Greg Abbott, who tweeted the following upon seeing footage of your commute on Twitter:

I believe in less government.

But allowing these scooters on crowded interstate highways is bad government and endangers public safety.

Not only are you the hero we need, but you’re the one we deserve right now. For forcing our elected officials to finally acknowledge that all of these scooters probably need at least a little regulation, we salute you.

Until such legislation comes, we hope you keep on riding our highways and doing as you were. From where we’re sitting, we only see your continued scooting as helping us arrive at a societal solution even sooner.

May your commute traffic be light, and may the wind be at your back.

Pete Freedman and the rest of the Central Track staff