Critics Roundtable: The Best Films Of 2019. 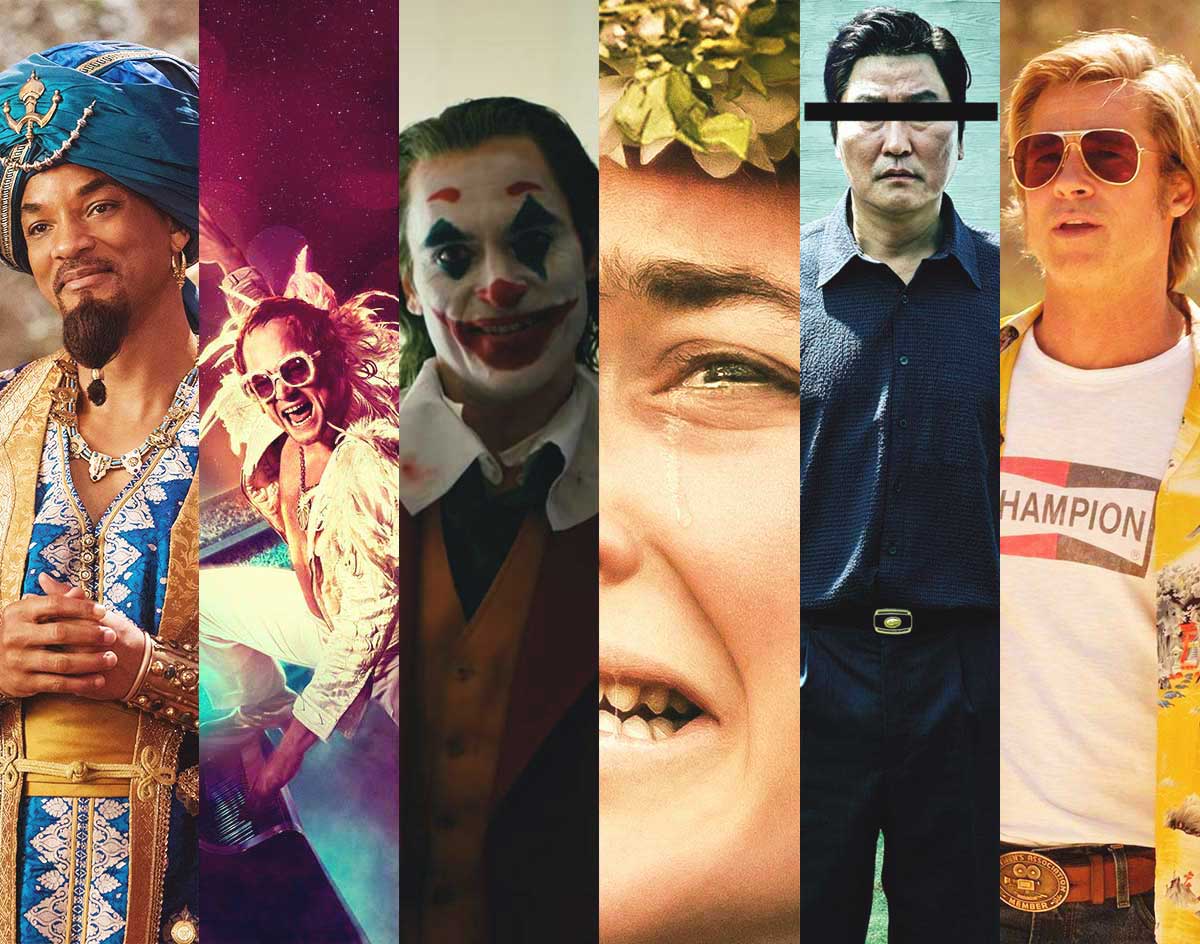 Our Film Critics Share Their Favorite Movies, Scenes, Performances, Surprises And More From A Terrific Spate Of 2019 Releases.

There were plenty of times when it seemed like this wouldn’t be a that great a year for movies.

A so-so spring and lackluster summer – not to mention a holiday season led by Star Wars: The Rise of Skywalker and Cats – didn’t make the strongest case.

But an extremely strong fall season, and some stellar entries from legendary directors (Bong Joon-ho, Martin Scorsese and Quentin Tarantino, among others) managed to keep us riveted at the cinemaplex throughout 2019.

Even if it sometimes feels like we’re drowning in I.P., audiences thankfully still flocked to original movies in 2019 and studios continued taking chances on ambitious projects (even if that studio is Netflix).

For the first time ever, no single film made all three of our critics’ year-end Top 10 film lists — but there was still a decent amount of overlap. Here, we’ll share our combined ballots, our greater thoughts on various 2019 film matters and, at the end of this post, we’ll share our individual ballots, too.

Here’s to another great year in movies! — Kip Mooney

10 (tie).
Booksmart, How to Train Your Dragon: The Hidden World and Marriage Story

Movies We Loved That Others Didn’t.

Aladdin. To be clear, I am not for Disney turning every Golden Era-animated film into a live-action remake. I wasn’t a fan of the new version of The Lion King, and I was weary of what Aladdin might end up being. But I ended up blown away by how entertained I was watching this film. The scenery and costumes were beautiful, and the added dance numbers were amazing. Despite the online backlash before the film was even released, Will Smith made for an excellent Genie — no, he’s not Robin Williams, but he wasn’t trying to be Williams. Smith brought his own spin on the character, and it was wonderfully entertaining. – Angela Travis

Holmes & Watson. Technically a 2018 release, the box office bomb Holmes & Watson featured Will Ferrell and John C. Reilly stepping in as the iconic crime-solving duo. Was it perfect? No. Were some of the jokes dated? Yes. Was it hilarious more often than not? I think so. – Javier Fuentes

Under the Silver Lake. The follow-up to David Robert Mitchell’s excellent horror flick It Follows was supposed to come out last summer, and then last December. Eventually, it got only the briefest of theatrical releases before getting dumped on VOD and Amazon Prime Video this spring. Even then, it managed to be divisive as hell. Here, Andrew Garfield plays Sam, an unemployed loser who convinces himself there must be a vast conspiracy when a neighbor he was supposed to hook up with (Riley Keough) disappears. Whether he’s right or not is beside the point. It’s all about the journey, man! This one involves cults, pop music history and back issues of Nintendo Power magazine. What’s not to like about that? – KM

Movies People Loved That We Didn’t.

Midsommar. Hereditary made my top 10 list last year. So, yeah, I’m a fan of director Ari Aster’s work. And a follow-up film about a mysterious cult in Sweden sounded like another tense thriller. Instead, it was a monotonous film that felt like it would never end. Aster likes his characters to suffer, but to what end? In Hereditary, they suffered because it was their destiny. In Midsommar, they suffered because the two main characters… shouldn’t be dating, I guess? The ultimate message was unclear, and the finale seemed gratuitous for gratuitous sake. – AT

Avengers: Endgame. Much like the most banal of blockbusters, Endgame feels good in the moment. In retrospect, though, the culmination of the almost 10 years of Marvel movies was a bizarre and overstuffed mess — one that showed how the comic book style of storytelling does not really work for most movies, even if it looks pretty. – JF

Joker. After Jared Leto’s horrendous take on the iconic villain in the disastrous Suicide Squad, I was ready to not see the Clown Prince of Crime for a while. Yes, somehow, we were force-fed another Joker film — this one from the guy behind The Hangover movies. Oh, he’s going to be the guy to really give a bold new vision on this iconic character? Audiences bought it hook, line and sinker, though — despite this film not really having anything of substance to say. To me, Joker was the guy in your poli-sci class who just wanted to play devil’s advocate but not really commit to any point of view. I’m good on that. – KM

Best Part of a Bad Movie.

The cinematography of Midsommar. I already stated that Midsommar was nowhere near my favorite film of 2019. It was, however, the prettiest film I saw this year. Ari Aster has an eye for framing, and he was able to make the lush Swedish landscape feel ominous here. The bright colors, flowers and costumes all painted an idyllic picture of a secluded community. It really is a feast for the eyes. – AT

Anything related to the monsters in Godzilla: King of the Monsters. My boi King Ghidorah has honestly never looked better than he did in 2019, and it’s a shame that his starring villainous role is sandwiched between scenes of Kyle Chandler mansplaining his way through this movie. Oh, well. Next time! – JF

Joaquin Phoenix’s performance in Joker. Even I can’t deny that Joaquin Phoenix, one of the most gifted and underrated actors of his generation, elevated this muddled movie. I may not have bought what this movie was selling, but I was transfixed whenever Phoenix was on-screen as the mentally ill outcast Arthur Fleck. – KM

Scene of the Year.

The last 10 minutes of How to Train Your Dragon: The Hidden World. Once in a while, a movie series will hit you right in the gut. For me, it was How to Train Your Dragon. This series has resonated with me since the first film came out years ago, and going into the final installment, I knew I would be emotional. I just didn’t realize how emotional. I cried so hard when Hiccup and Toothless said goodbye to each other; I was honestly stifling back sobs in the theater. Tears rolled down my face with no end in sight as Toothless put his head into Hiccup’s hand one last time. I will miss this world and its characters a lot, and the way this film ended was a perfect send-off. – AT

When Elton John first plays the Troubador in Rocketman. When young Elton is finally getting the chance to play a large audience in America, he starts off playing a slow intro to “Crocodile Rock” for a skeptical audience. Then his feet rise off the ground, the music grinds to an ethereal pace and everyone in the audience starts to float before the music picks up again. This scene is the best distillation of the feeling and potency of live music — when it just hits you right in your soul. It’s iconic as hell, and in a great movie to boot. — JF

The knife fight in John Wick: Chapter 3 – Parabellum. There were plenty of great moments in movies this year. The multiple twists in Parasite. The portals opening in Avengers: Endgame. But no scene got me as giddy as this battle in the third John Wick movie. Yes, even in a movie in which Keanu Reeves kills Dallas Maverick Boban Marjanovic with a book, uses a horse to kick two bad guys in the head and evades a katana-wielding motorcycle gang, nothing brought me as much joy as this early fight scene in an antique store, in which Wick and two would-be assassins use every vintage blade at their disposal in grisly fashion. – KM

Performance of the Year.

Scarlett Johansson in Jojo Rabbit. The premise of Jojo Rabbit can easily overshadow its performances. It’s certainly a lot: A young boy who has an imaginary friend (Hitler) wants desperately to prove to Germany that he is dedicated to the Nazi cause. But Johansson plays the boy’s mother well. She’s a fiery, fast-talking woman who is trying to make a better future for her boy and her country. After getting the short end of the stick with the Avengers series, Johansson is able to stretch her acting chops here. She initially comes across as a bit spunky and aloof, but you soon realize there is more going on underneath her persona. She truly gives an Oscar-worthy performance in this film. – AT

Brad Pitt in Ad Astra and Once Upon a Time in Hollywood. Pitt’s slowly becoming a hunky character actor, and the dude’s versatility and natural charisma make him one of our best. — JF

Adam Sandler in Uncut Gems. While I still only like (and not love) the movies of the Safdie Brothers, what they do here with Sandler is simply extraordinary. He’s shown flashes of brilliance before – most recently in Noah Baumbach’s The Meyerowitz Stories – but this might be the best he’s ever been. Howard simply has no self-control. He always has to go for a bigger deal and a bigger high. The Safdies also harness his volcanic rage, making him explode at the most inopportune moments. Somehow, he keeps convincing people to give him another chance, even when everyone knows they shouldn’t. – KM

Satanic Panic at OCFF. After not having gone to the Oak Cliff Film Festival last year, I made a point to go this year. I’m glad I did: The OCFF has flourished into an amazing weekend of discovering hidden gems that otherwise wouldn’t make it to Dallas. This year, one of my best memories was going to see Satanic Panic, which was filmed locally. Right before the film began, the filmmakers wanted all audience members to hold up devil horns with their hands and yell, “HAIL SATAN!” for a picture — a request to which everyone of course happily obliged. It was a moment that capture the kind of magic that can only happen during a film festival. – AT

Taking my newborn to his first movie. Thanks, Alamo for All! – JF

Apollo 11. I went to Sundance for the first time this year, and this was one of the first movies I saw there. This stellar documentary pulls from thousands of hours of NASA archives to make a tidy, riveting presentation of the first manned mission to the moon. Seeing this on the big screen at its world premiere, everyone was glued to their seats. Afterward, we were treated to the rare illuminating filmmaker Q&A. – KM

Spider-Man: Into the Spider-Verse. How come I waited until the summer to finally check this film out? This easily would have made my top 10 list last year. The animation, the voice work, the story — it was all amazing. This was one of the few films I remember watching in the past decade that felt fresh and new, and yet familiar at the same time. Also, you can’t go wrong with John Mulaney voicing Spider-Ham (a.k.a. Peter Porker). – AJ

The Man Who Killed Hitler and Then the Bigfoot. It’s both as wild and tamer than the title implies. Melancholic, triumphant and funny, it’s a hidden gem if ever there was any. — JF

Leave No Trace. Many people were rightly impressed with young Kiwi actress Thomasin McKenzie in Jojo Rabbit this year, but I already knew what she was capable of after seeing her breakthrough role in this emotional drama from Debra Granik (Winter’s Bone). As the daughter of a homeless veteran (Ben Foster), she’s torn between the love she feels for her father and her desire to assimilate back into mainstream society. It’s a heartbreaker. – KM

Javier Fuentes:
1. Climax
2. Ad Astra
3. Uncut Gems
4. Parasite
5. Blinded by the Light
6. John Wick: Chapter 3 – Parabellum
7. How to Train Your Dragon: The Hidden World
8. Detective Pikachu
9. Rocketman
10. Once Upon a Time in Hollywood