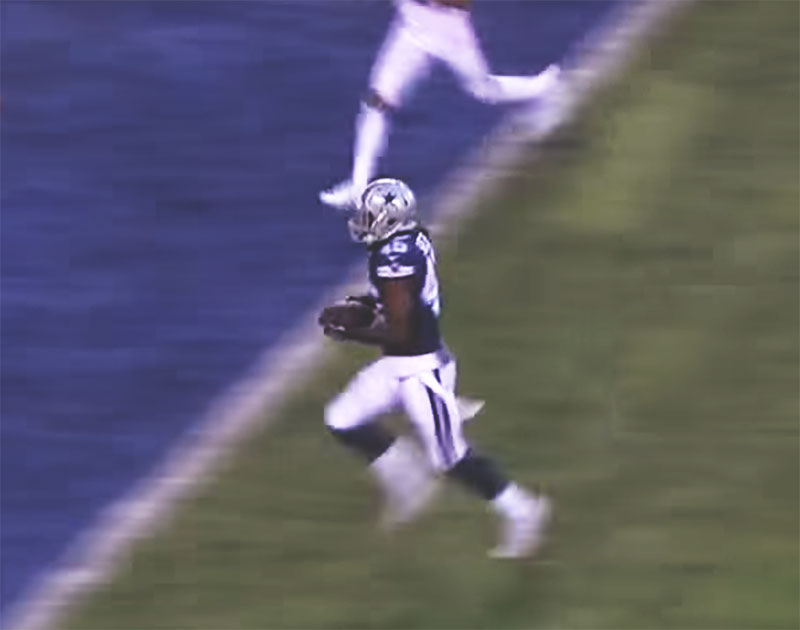 A Fourth Quarter Dreams Are Made Of, And Five More Takeaways From The Cowboys’ 30-10 Win Over The New York Giants On Sunday.

The fourth quarter of yesterday’s 30-10 win over the New York Giants was the kind of quarter Dallas Cowboys dream about.

After struggling through much of the game’s first three quarters, the Cowboys were mostly lucky to still be in the game, tied at 10-10, as the game approached its seven-minutes-remaining mark. But then the fortunes changed — and fast.

Following a quick three-and-out forced by the defense, Cowboys quarterback Dak Prescott led the offense with his arm on an impressive drive. Following a 54-yard strike to slot receiver Cole Beasley, Prescott connected with Jason Witten for the tight end’s first and only catch of the game, a 20-yard touchdown reception. On the ensuing Giants possession, the defense then forced another punt after a short eight-play Giants possession. Then came the play of the game: Second-string Cowboys running back (and brother of linebacker Jaylon Smith) Rod Smith lined up in the slot as a wide receiver, looking like a decoy but turning out to be a real threat as he took a short slant pass from Prescott a full 81 yards to the house. When healthy-again Cowboys linebacker Sean Lee then picked off an Eli Manning pass in traffic that was deflected by rookie corner Chidobe Awuzie, the fate of the game was pretty much sealed. Then, just three plays later, Rod Smith formalized that, running 15 yards for his second score of the game.

In just a span of about six game minutes, the Cowboys put up 20 points. And it was the just kind of effort that the Cowboys needed to put up in that quarter, really. With no other path to the playoffs existing without Dallas winning yesterday’s game and every other one on the remaining schedule, it was also the kind of effort the team will have to put up the rest of this season.

That in mind, let’s take a look at my main takeaways from yesterday’s win and try to determine if there’s any chance in hell that happens.

1. After losing its first three games during during star back Ezekiel Elliott’s six-game suspension, yesterday’s win was Dallas’ second straight without him. At least as far as yesterday’s game goes, Rod Smith deserves a lot of credit for filling the void left behind by Zeke. Smith was extremely productive in New York on Sunday, putting up a total of 160 total yards from scrimmage and scoring two touchdowns. There’s no doubt his production will fall off once Zeke returns to the field in two weeks, but his play has been encouraging. Here’s hoping he keeps it up next week as the team travels out to the Bay to play the Oakland Raiders.

2. Speaking of important returns to action, Sean Lee registered 18 tackles to go along with his fourth-quarter pick in his first game back from a hampered hamstring. Lee is obviously a talented player with a wide array of impressive attributes. But it’s pretty clear at this point that his more important ability is his availability.

3. In his own second game back from injury, placekicker Dan Bailey uncharacteristically missed two field goals and an extra point, leaving a whole seven points on the board. Beyond hurting his team, the field goal misses in particular also did some damage to his own personal legacy, dropping him to No. 2 on the NFL’s career field goal percentage list.

4.With all the headlines that defensive end Demarcus Lawrence has garnered this year for his quarterback pressure (13.5 sacks on the year, which is still good enough for the second-highest total in the league even though he didn’t sack Manning on Sunday) and that Sean Lee has earned for his familiar health issues, the youth in the Cowboys secondary hasn’t gotten nearly the attention it deserves in 2017. And, yesterday, that group did something especially remarkable. Against the Giants, the Cowboys started three rookie cornerbacks — Chidobe Awuzie at left cornerback, Xavier Woods (technically a safety) in the slot and Jourdan Lewis at right corner. The last time as many as two rookie corners started for the team was all the way back in 1981, when Everson Walls and Michael Downs got the starting nods.

5. If it’s not Dak, it’s Dez. If it’s not Dez, it’s Dak. When are these two gonna figure their shit out? Bryant had two big drops in the first half yesterday, but kind of made up for it with a 50-yard touchdown catch-and-run right before halftime. Still, Dez looked like the issue yesterday, as Dak’s 20-for-30 passing day, complete with 332 passing yards and three touchdowns in the air, was another step in the right direction for the young quarterback, who maybe appears to be coming out of his mid-season slump.

So, OK, where do the Cowboys go from here? Even if they run the table and win every game left on their schedule, they still need teams ahead of them in wildcard standings to drop one or more games in order to sneak their way into the playoffs. Any chances of this happening is obviously slim. But while they can’t control the other teams’ play, they can control their own, and yesterday’s win at least kept the playoff door open for now.

Can they keep their chances alive next week against the Raiders? We’ll see.