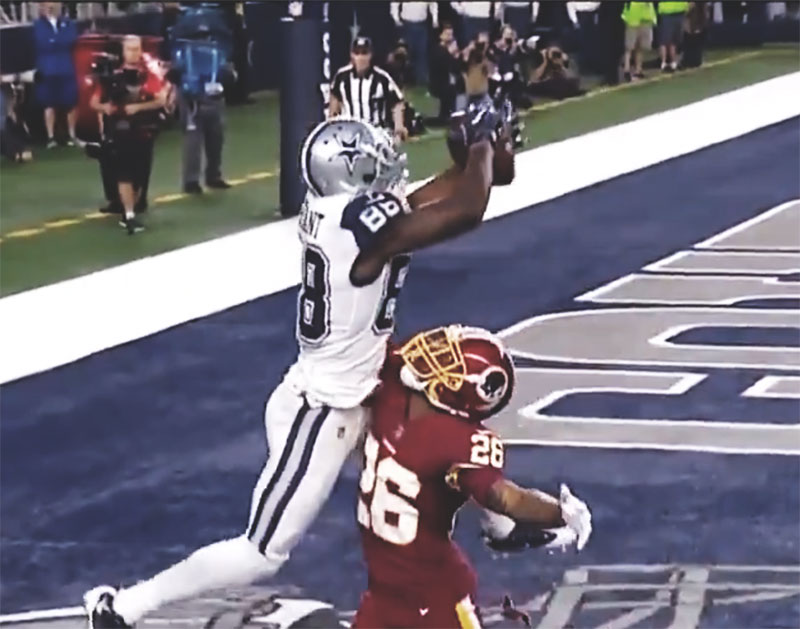 Eight Observations From The Cowboys’ Thursday Night Win Over The Washington Redskins — The Team’s First Victory Since Zeke Went On Suspension.

Has it begun? Could the Dallas Cowboys’ 38-14 win over the Washington Redskins at AT&T Stadium last night be the beginning of a five-game win streak that will push this team, after this roller coaster of a season, into the playoffs?

Man, I wouldn’t hold my breath on that happening.

But, hey, it still felt good to get back on the winning track last night, especially in a game I thought the Cowboys would lose. I mean, c’mon, after three straight losses, did anyone think this team had it in them to pull out a win last night? What about after that wild, scoreless first quarter in thee teams’ 116th meeting? Not me, but I’m happy to have been proven wrong.

Beyond the fact that I maybe am not the genius game-predictor I purport myself to be, here are my main takeaways from last night’s win.

1. The Cowboys had five offensive possessions in the first quarter alone, but three of those turned out to be three-and-outs and the team came away with zero points to show for those five drives. It’s tough not to blame Dak Prescott for that, especially considering that the Cowboy’s franchise quarterback only amassed 102 yards through the air all game long while completing just 11 of his 22 pass attempts. Even though two of those completions turned out to be touchdowns, Prescott is looking shaky these days, to say the least. He continues to use his legs to scramble and make plays, and that’s obviously good to see, but He’s just whiffing on big downfield plays. It was good to see him power through a hand injury that came shortly before halftime, though. Here’s hoping the 10 days the team has off before its next game is enough time to help him heal both his hand and whatever is ailing his play.

2. One of Dak’s bigger issues this season has been his inability to connect with his top receiving weapon, Dez Bryant. But, really, the Dak-to-Dez connection looked a bit better this week! The two linked five times for 61 yards — and, best of all, for an impressively acrobatic touchdown. The good news about that fourth-quarter score from Dez? It was his 72nd career receiving touchdown, good for the most all-time in Cowboys franchise history. The bad news? It was just his first receiving TD since Week 7 against the 49ers. Yeesh.

3. While Ezekiel Elliott is somewhere out of the country, hopefully training and honing his skills and not jigging his life away with a NASCAR jacket draped over his shirtless body, Alfred Morris had himself an extremely productive night out of the backfield. He gashed his former team for 127 yards on 27 carries and a touchdown. Better yet, he made it look easy. Impressive stuff, considering it was the most yards he’d gained and most carries he’d had in 65 games.

4. Coach Jason Garrett loves talking about “all three phases” of the game in his press conferences, and the third phase showed up in a big way on Thursday night as the Cowboys special teams was truly clicking in this game, forcing a turnover on one side and scoring on the other. And, hey, return man Ryan Switzer finally got himself a score! The rookie from the University of North Carolina, who held the record for receptions and receiving yards at his school but entered the NFL as a known special teams force, finally housed an 83-yard punt return that ended with a somersault into the end-zone. Here’s hoping that was the first of many.

5. Kicker Dan Bailey is still kicking 100 percent all time on field goals and extra points against the Redskins. It’s good to have him back healthy.

6. I was pretty astonished by the Cowboys’ defensive play against the Redskins. After hearing throughout the week that some players were growing disgruntled with defensive coordinator Rod Marinelli’s lack of adjustments, it was surprising to see that the defense came to play in this contest, and especially the secondary, which pulled in two picks in the night despite three rookies (Xavier Woods, Jourdan Lewis and Chidobe “Cheeto” Awuzie) getting significant minutes and showing promise. Awuzie’s coverage skills looked especially solid as the Redskins tested him early and he was up to the challenge, allowing zero completions in the first half on passes thrown his way. Safety Jeff Heath and corner Anthony Brown each contributed picks, and safety Kavon Frazier looked good filling in running lanes. The front seven was even more stout, holding Washington to a mere 56 rush yards on the night, and even Taco Charlton got in on the fun with a sack and forced fumble. A few big plays were given up, sure, but this defense looks as good as it has in a very long time.

7. Speaking of how good this defense is: How amazing a start to the season did Cowboys defensive end Demarcus Lawrence have this year? This stat will explain it: His sack on Kirk Cousins last night was his first in four games and it upped his total to 13.5 sacks on the year, which is still good enough for the league lead by a full sack and a half.

8. Kirk Cousins has put up big numbers in the air against Dallas in each of his seven match-ups against this team. But he’s now just 1-6 against the Cowboys all time. Can anyone explain that to me?

Wins are always good, but if this team realistically is to have any chance of making the playoffs, it will have to win out its remaining games and get a little help in the form of other teams crumbling down the stretch. Is it possible? Eh, maybe. Time will tell.

Staying on the subject of time: Zeke returns in three weeks.

Fortunately, I don’t think the Cowboys will need him next week as they head up to New York to take on a Giants team that has clearly given up on this season.