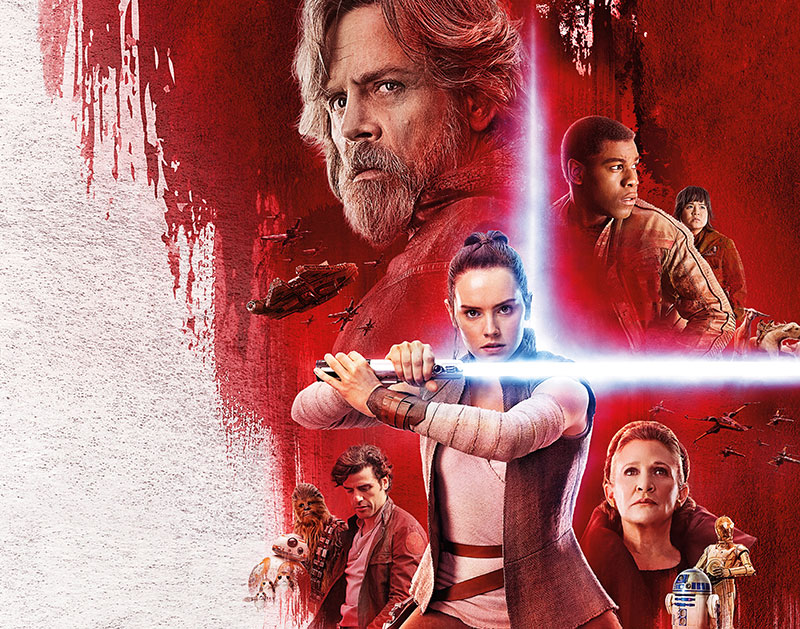 On Star Wars: The Last Jedi, Downsizing, The Disaster Artist and The Rest Of December’s New Releases, Limited Showings and Repertory Screenings In Dallas.

Nearly all the studios are making way this month for Star Wars: The Last Jedi, which will almost certainly be the biggest movie of the year.

But there are still other big spectacles, biopics galore and surprising romances coming down the new-release pipeline this month. And, hey, even if none of that interests you and you’re seeking instead a series of films to match your black heart for these holidays, the Alamo Drafthouse is expanding its annual “Dismember the Alamo” event to include a Christmas-themed horror marathon that will be held at their Richardson location on Saturday, December 9.

It should be a December to remember, indeed.

Star Wars: The Last Jedi.
Director: Rian Johnson.
Writer: Rian Johnson.
Cast: Daisy Ridley, Adam Driver, Carrie Fisher, Mark Hamill.
Opens: Friday, December 15.
Even if you weren’t blown away by The Force Awakens and you’re already sick of Porgs, there’s so much potential for greatness in Episode VIII. That’s mostly due to Rian Johnson, who’s directed three great films and some exceptional television. Disney’s confidence in him is so high they’ve given him carte blanche to direct an entirely new trilogy of films unrelated to this one. Also exciting? Unlike Justice League or the other Star Wars spin-offs, there’s been nary a word about trouble on the set or massive reshoots or questionable review embargos. It’s possible this could still miss the mark, but all signs point to this being the best blockbuster of the holiday season.

The Greatest Showman.
Director: Michael Gracey.
Writer: Jenny Bicks, Bill Condon.
Cast: Hugh Jackman, Michelle Williams, Zac Efron, Zendaya.
Opens: Wednesday, December 20.
I already know this movie is going to be cheesy as hell, but sometimes you need a big spectacle that doesn’t involve explosions or superheroes or giant robots. Hugh Jackman can do this charming underdog stuff in his sleep, but he still seems fully committed in the early looks I’ve seen of this biopic of P.T. Barnum. And, while your mileage may have varied on La La Land, the excellent musicians behind the original tunes for that Oscar winner have also written the songs for this musical.

All the Money in the World.
Director: Ridley Scott.
Writer: David Scarpa.
Cast: Mark Wahlberg, Michelle Williams, Christopher Plummer, Charlie Plummer.
Opens: Friday, December 22.
This thriller about the abduction of Paul Getty already looked interesting, but now it’s going to be a major historical artifact. See, Kevin Spacey had already finished filming his role as the ruthless oil magnate J. Paul Getty for this film. But, after allegations of sexual assault (both past and present) came to light, Ridley Scott decided to re-film all those scenes with Christopher Plummer instead. Then he gave himself the added challenge of keeping his late December release date. So even if it’s a whiff from Ridley Scot, who can turn in an instant classic like The Martian and a total disaster like Exodus: Gods and Kings back-to-back, it’s going to be one of the most fascinating films of the year.

Downsizing.
Director: Alexander Payne.
Writer: Alexander Payne, Jim Taylor
Cast: Matt Damon, Christopher Waltz, Hong Chau, Kristen Wiig.
Opens: Friday, December 22.
This sci-fi dramedy – about people who volunteer to live their lives shrunken down to the size of rice – got mixed reviews at festivals this year, but I still have faith in Alexander Payne to deliver a poignant and hilarious movie about humans and failure. He and his writing partner Jim Taylor have come through many times before (About Schmidt, Sideways, Nebraska).

Call Me by Your Name.
Director: Luca Guadagnino.
Writer: James Ivory.
Cast: Timothée Chalamet, Armie Hammer, Michael Stuhlbarg, Esther Garrel.
Heralded as a classic from the moment it debuted at Sundance, this coming-of-age drama has a lot to live up to. Timothée Chalamet stars as Elio, a 17-year-old kid spending the summer in Italy with his family, filling his days and nights with drinking, dancing and sleeping around. But that all changes when he meets Oliver (Dallas’ own Armie Hammer) and instantly becomes obsessed with the older man who stumbles into his life. Nearly every review seems to indicate you will be changed too.

The Disaster Artist.
Director: James Franco.
Writer: Scott Neustadter, Michael H. Weber.
Cast: James Franco, Dave Franco, Ari Graynor, Seth Rogen.
The Room is legendary as one of the worst movies of all time, and it very much lives up to its title as a masterpiece of incompetence. But it’s also the work of a person with a lot to say, even if he can’t say it coherently. The Disaster Artist is based on star Greg Sestero’s account of what it was like to make a movie helmed by a completely unhinged egomaniac. James Franco plays writer-director-star Tommy Wiseau, while his brother Dave plays Sestero. Critics have said it’s quite funny but also surprisingly moving.

I, Tonya.
Director: Craig Gillespie.
Writer: Steven Rogers.
Cast: Margot Robbie, Sebastian Stan, Allison Janney, Caitlin Carver.
A late-breaking entry into this year’s Oscar race, this foul-mouthed quasi-biopic stars Margot Robbie as Tonya Harding, the figure skater who hired people to attack her arch-rival Nancy Kerrigan (Caitlin Carver). Sebastian Stan plays her shady husband Jeff, while Allison Janney has gotten all the acclaim as her absolutely horrid mother. I often don’t care for movies about real people, but my interest goes way up when they find a different angle – and aim for comedy over melodrama.

The Shape of Water.
Director: Guillermo del Toro.
Writer: Guillermo del Toro.
Cast: Sally Hawkins, Michael Shannon, Richard Jenkins, Octavia Spencer.
Guillermo del Toro has always made movies about beauty in the face of evil. Even if not every outing is a classic (although many are), they always look gorgeous. His latest should be no exception. Sally Hawkins plays a mute janitor who becomes obsessed with a creature known as The Asset. When she sees it being tortured by the director of the facility (Michael Shannon), she sets in motion a plan with her co-workers (Octavia Spencer and Richard Jenkins) to set the Asset free. Like all del Toro’s movies, it’s going to be on its own wavelength, but an absolutely breathtaking experience for those who catch onto it.

2001: A Space Odyssey.
Director: Stanley Kubrick.
Writer: Stanley Kubrick, Arthur C. Clarke.
Cast: Keir Dullea, Gary Lockwood, William Sylvester, Leonard Rossiter.
Playing At: Inwood Theatre.
Showing: Friday, December 1; Saturday, December 2.
Even if this isn’t showing in 70mm, it’s certainly a vast improvement over the first time I saw this film (on a transcontinental flight). Seeing this on the big screen is jaw-dropping, even if its prologue and epilogue are pretty damn boring. Almost 50 years later, the effects are still a sight to behold.

Brick.
Director: Rian Johnson.
Writer: Rian Johnson.
Cast: Joseph Gordon-Levitt, Lukas Haas, Nora Zehetner, Noah Fleiss.
Playing At: Texas Theatre.
Showing: Saturday, December 9.
This neo-noir blew my young mind when I first saw it. Rian Johnson’s debut feature cost less than $500,000 but it packed a wallop. Putting the bones of a Dashiell Hammett novel onto a high school movie was a risky proposition, but the young director pulled it off, creating a stylish, melancholic thriller in the process.

Cinema Paradiso.
Director: Giuseppe Tornatore.
Writer: Giuseppe Tornatore, Vanna Paoli.
Cast: Philippe Noiret, Salvatore Cascio, Marco Leonardi, Agnese Nano.
Playing At: The Magnolia.
Showing: Tuesday, December 19.
Simply one of the most beautiful, life-affirming movies you’ll ever see. More than any film made before or since, Cinema Paradiso captures the joy of watching and sharing great movies with people you love. Bring the tissues, but be ready to be changed forever.